NGC 1807 is a star group just west of much larger NGC 1817 in southern Taurus just above Orion. It was first noted by John Herschel on January 25, 1832. It is listed as Trumpler type II2p. Dreyer\'s description is \"cluster, pretty rich, large and small stars.\" My visual observation from 1982 reads: \"Group of bright stars against fainter ones. No real edge. Are the fainter stars part of the cluster?\" This was with my 10\" f/5 at 65 power. I didn\'t note conditions.

I\'d taken it on High Speed Ektachrome film that same 1982 night and noted the stars were orange not blue. I made a note to try again as apparently something went wrong with my development. In fact, I never mounted the slide I was so sure something was wrong. I never did retake it as it just didn\'t seem much of a cluster. Now that I\'ve tried again digitally those pesky orange stars won\'t go away. They look like red giants far off the main sequence. The chance of catching a cluster in this state seemed highly unlikely to me. Doing a bit of research I find WEBDA lists it but has no data on it other than position and magnitude. Other sources say \"cluster or star group\". Thus there\'s doubt about it being a cluster. Then I found this paper: http://arxiv.org/pdf/astro-ph/0407456v1.pdf that says by their analysis and comparison to nearby NGC 1817 it can\'t be a cluster. In fact, some of its stars are far-flung members of the NGC 1817 cluster with the rest just field stars of random distances. So it is just an asterism dominated by non-main sequence stars. That in itself is interesting as I\'d not expect that either from random stars. But it does explain the orange giant stars that so dominated my film image back in the 1970\'s. The cluster was discovered by John Herschel on January 25, 1832.

The area is rather free of dust as there are many background galaxies that appear to be very distant but not reddened by our galaxy\'s dust. Four galaxies, all likely part of a group, have redshift data that puts them 230 to 240 million light-years distant. Two are right in the heart of the \"cluster\". The northernmost, [WMR2009] 037 is listed in 13 X-Ray catalogs, three infrared catalogs and one UV catalog as well as radio. NED says it is Seyfert 1.5 while most other sources say Seyfert 1. In any case, it is one heck of an active galaxy.

South of it is CGCG 469-003 which NED shows as a \"Compact\" galaxy. It does have a small bright core as seen in many images but that core has a huge fuzzy halo about 80,000 light-years across which is far from meeting the compact status.

The third galaxy has the very unusual designation of 2E 0507+1626 Clump. This is from the Second Einstein X-Ray catalog. I don\'t know what the clump designation means.

But the strangest galaxy is LCSB S0852P. This catalog I\'ve used before. It is the Low Central Surface Brightness galaxy catalog. NED makes no attempt to classify it. It looks to me like a disrupted spiral. It is full of blue knots likely formed from the disruption. I\'ve included a Sloan image of it.

So while the cluster turns out to be just an asterism of mostly non-main sequence stars the field turns up some quite active and interesting galaxies. 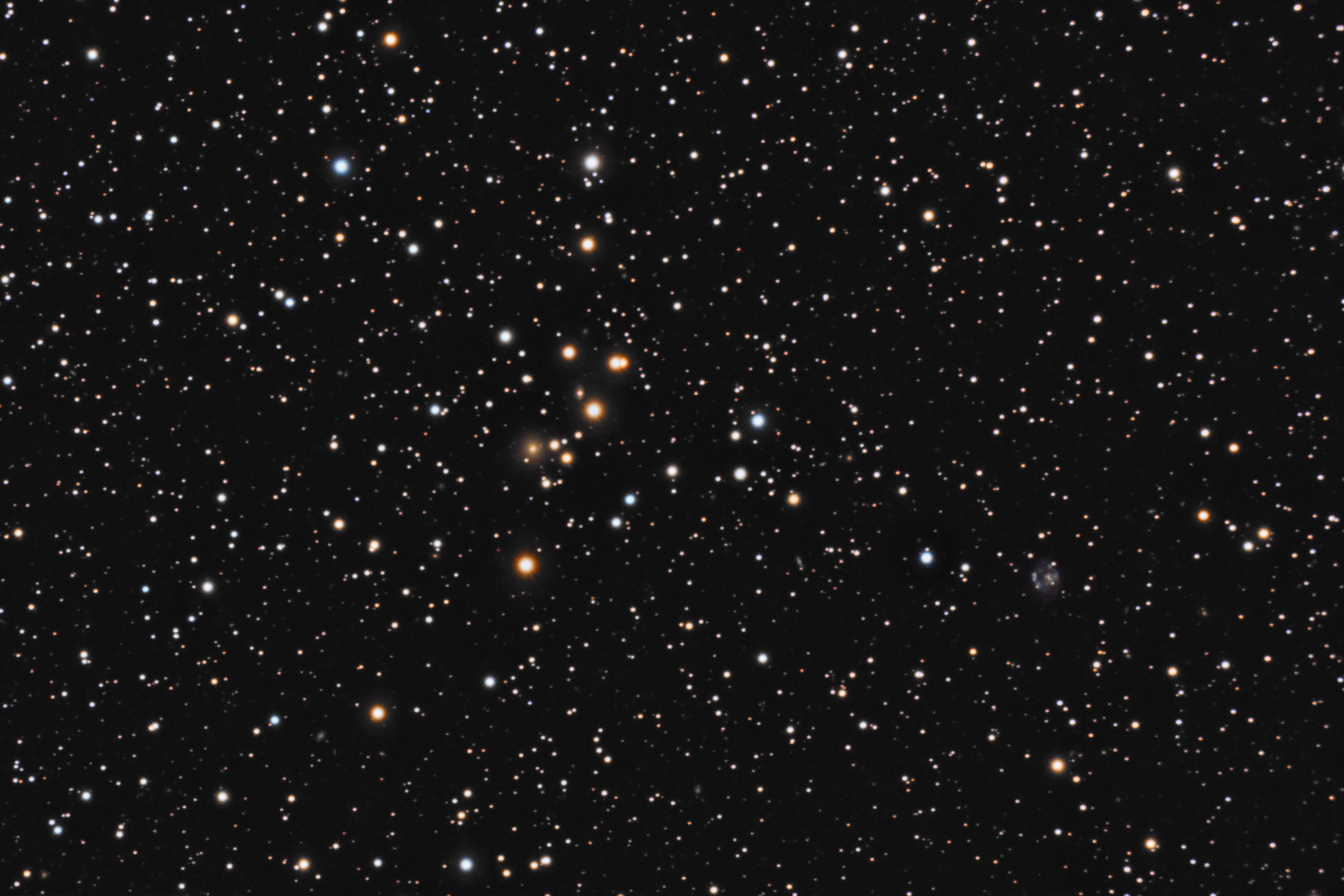 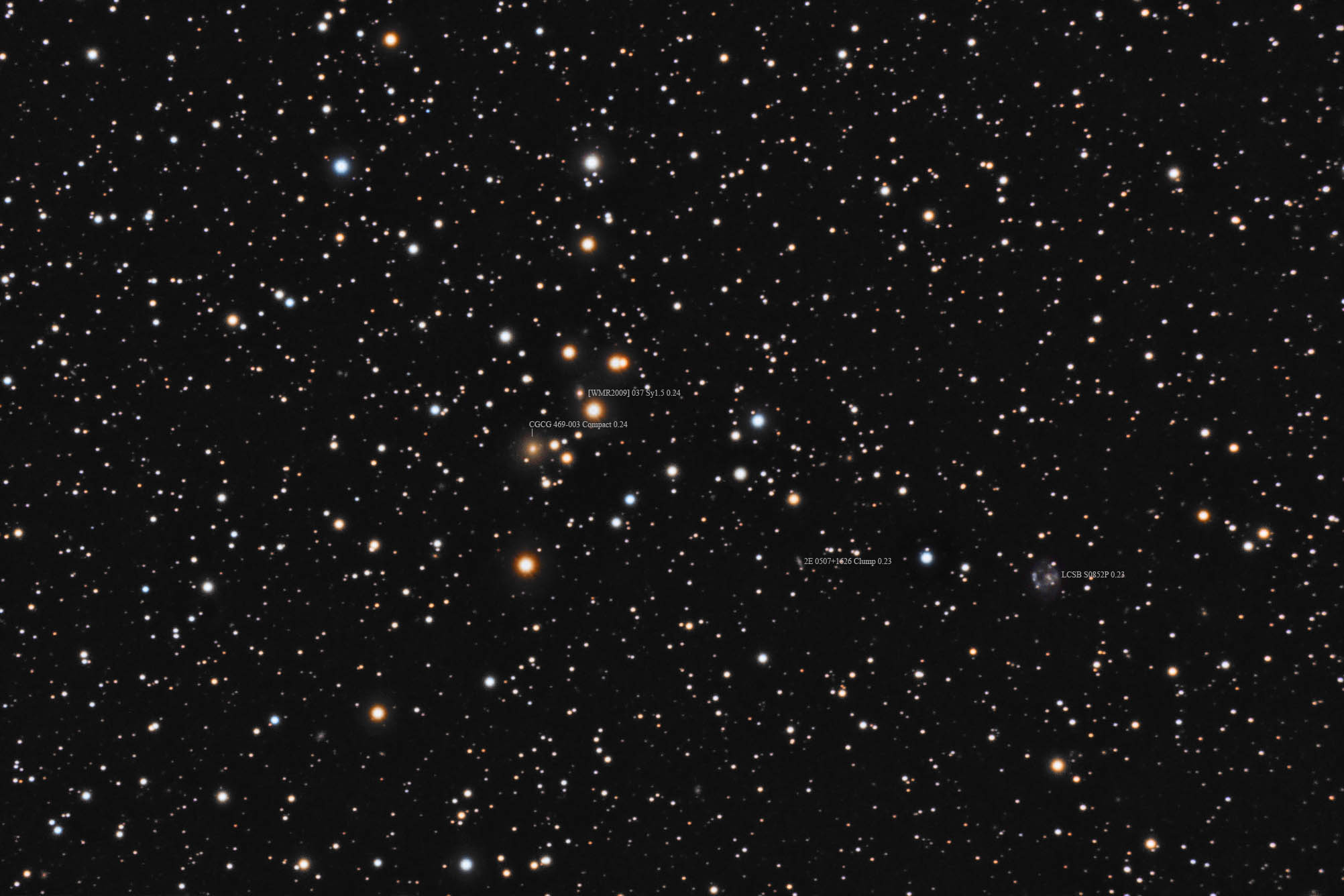