NGC 2339 is a nice face-on spiral between the knees of Pollux the eastern twin in Gemini about 110 million light-years away. I measure it at about 75,000 light-years across. To the east is an apparent companion LEDA 143096 with a similar redshift. It is much smaller at 26,000 light-years across. The only other galaxy with redshift data in the image is PGC 020201 at 660 million light-years. It is a core with a ring and a plume to the south. Including the plume, I measure its size at 112,500 light-years across. I assume the plume and ring are due to something it interacted with. North of it is a nice flat galaxy. I couldn\'t find it in any catalog used by NED or SIMBAD. Some obscure catalog may have it but I didn\'t check the thousands of these it could be in. It is noted with a question mark.

Notes on NGC 2339 at NED are somewhat contradictory. One says \"Suggested as double-barred by Laine et al. (2002). Inspection of WFPC2 F606W and NICMOS2 F110W and F160W images indicates that the nuclear region has both strong dust lanes and star formation; the \"bar\" detected by Laine et al. appears to be an IR-bright (star-forming?) ring, with at least two bright nuclei inside.\" While an earlier note without HST help says \"The bar is very weak in NGC 2339, and there is no evidence for recent star formation in it.\" This note also would prefer SBbcII.2 for the classification.

It was discovered by William Herschel on February 22, 1789. It is in the second H400 observing program. Unfortunately, my visual log from that is lost and I made no other notes about it.

Being in the Zone of Avoidance there\'s little information on this field. I have listed all galaxies NED shows. Many more may be listed in the over 400 EvS objects they list but I can\'t begin to spend the time to check that many so only show those with a galaxy designation at NED.

Several asteroids are in the image but only 2 made it through the rather lousy transparency of this night. One is right inside the galaxy. For some reason, its trail is only about half the length it should have according to the Minor Planet Center. Also, it is about 6\" south of where they put it. Checking online images (not many including the Hubble image which barely shows the area) I see nothing where the trail is in my image. It should be about the same length as the one on the far right edge of the image but isn\'t. It also fades in the middle which the other doesn\'t. It\'s that way in the raw FITS stack so not a processing artifact. The HST image of the western 60% of the galaxy is here https://commons.wikimedia.org/wiki/File:NGC_2339_hst_06359_96_f606w.png. It is oriented the same as mine but its stars are much tinier.

Seeing and transparency for this image was poor bloating stars due to high clouds. Another that needs a reshoot it likely will not get. 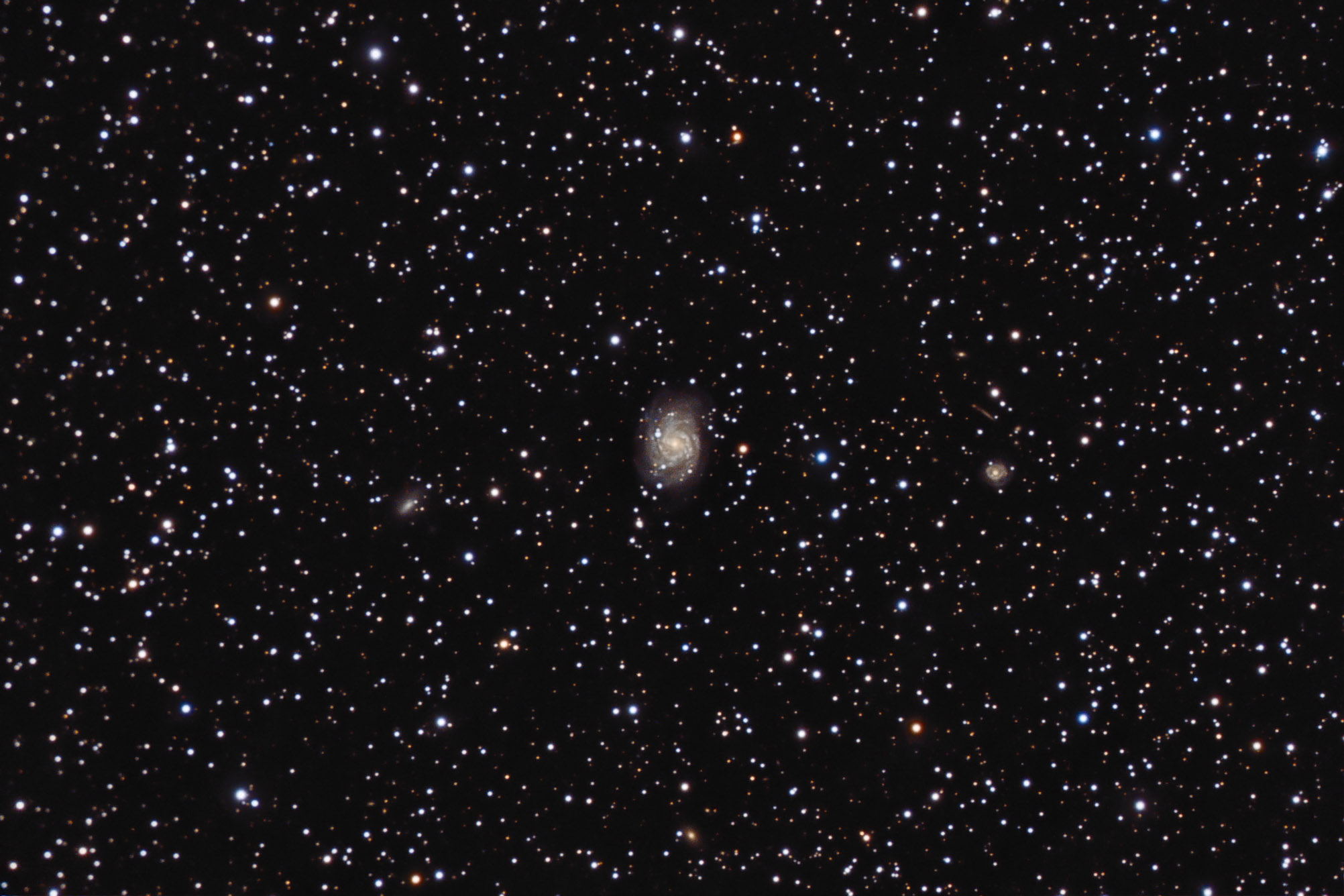 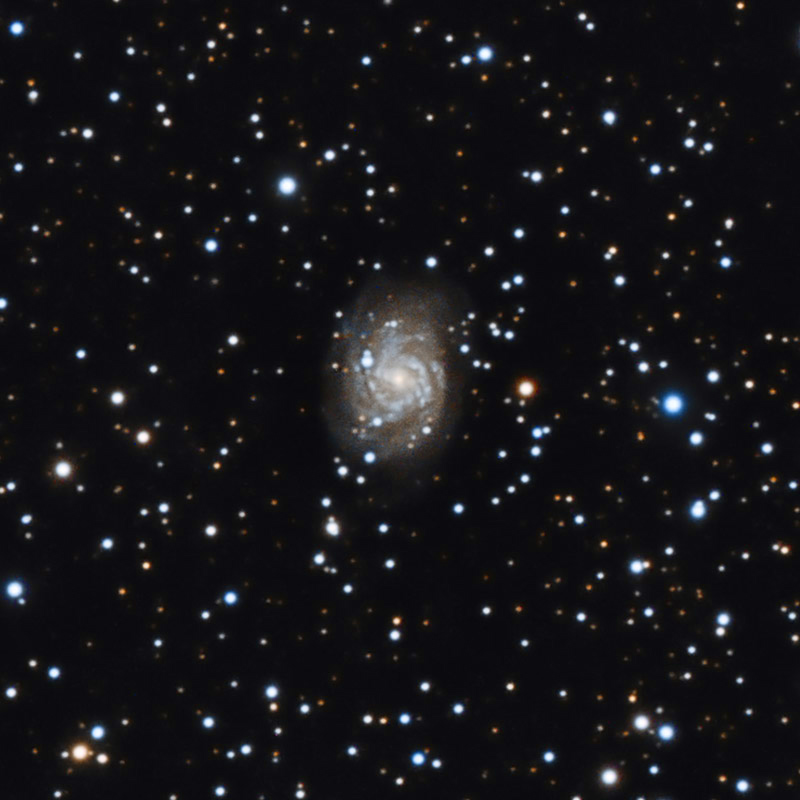 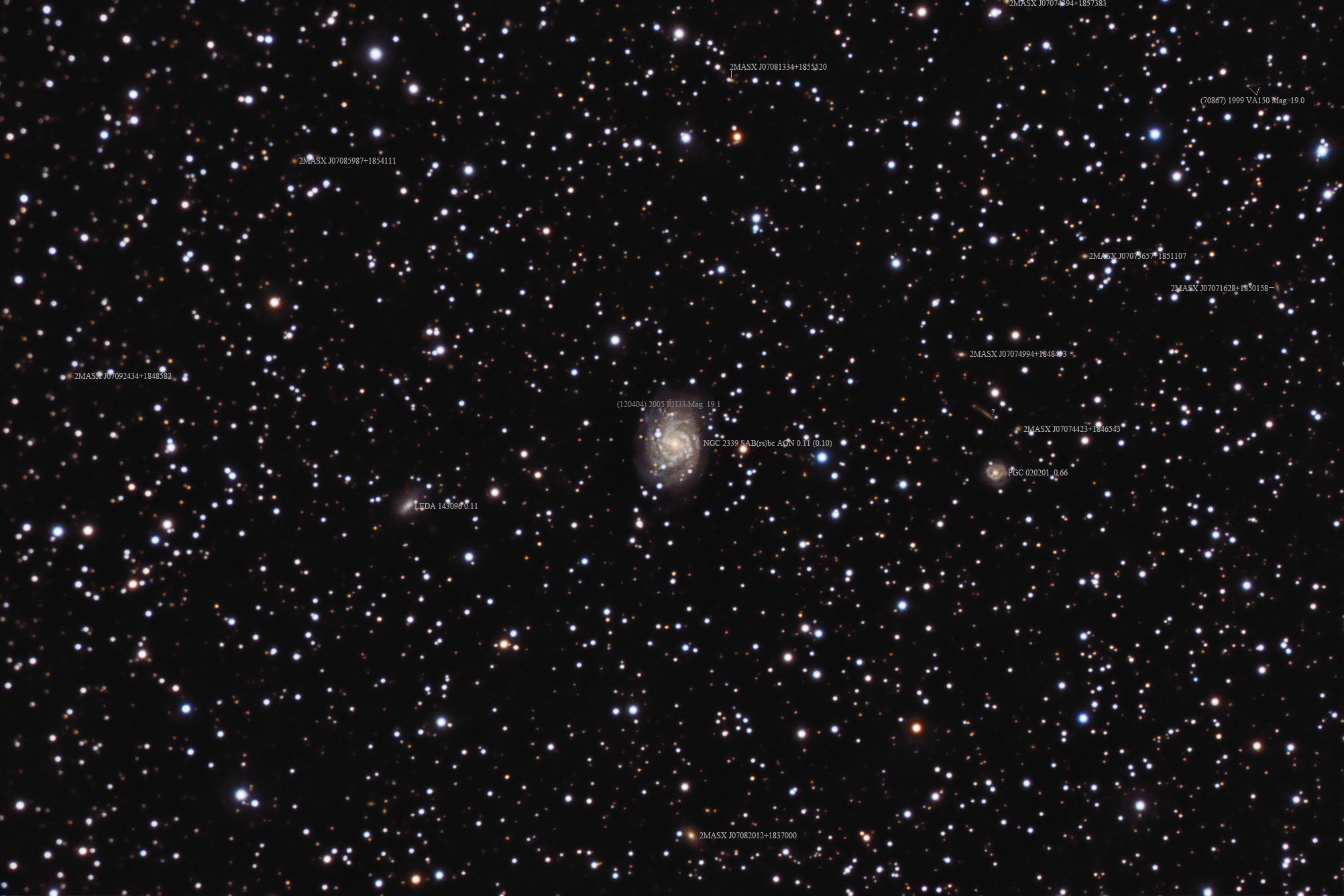