NGC 2366 is a dwarf galaxy in the M81 group. While it is a strange galaxy it isn\'t strange enough to make Arp\'s list. It is located in the constellation of Camelopardalis. That might sound like it is a camel but it is a giraffe and a rather faint one at that. This is a pair of galaxies. The tiny one is NGC 2363. Both are about 10 million light-years away so in our backyard. Massive star formation is going on in both galaxies. Two huge star clusters have formed in the star-forming region of NGC 2366. In fact, this is the original NGC 2366 as William Herschel described it when he found it on December 3, 1788. Though he did mention the rest of the galaxy all he meant as his find was this region. Only later did the name come to be applied to the entire galaxy. Their blue light completely overwhelmed my filters so the red color of the ionized hydrogen is pretty well lost though small regions in other areas of the galaxy are very obvious. I had better luck with the companion where the star cluster didn\'t saturate my system. Note the HII region ends with a shock wave at the northeast (upper left) end of the pink nebula. This likely is created by the light pressure of the super hot blue stars in the cluster. Whether this is really a separate galaxy or just part of NGC 2366 seems unknown as yet. Many years ago Hubble took a great shot of the star-forming regions that are so blown out in my image. Learn more about this at:
http://hubblesite.org/newscenter/archive/releases/1996/31/image/a/

NGC 2363 was discovered by Ralph Copeland on March 9, 1874. He mentions the star-forming region Herschel found and references that region as NGC 2366 so by 1874 the name hadn\'t yet been applied to the entire galaxy. Note too that NGC 2366 lies within the blue halo of NGC 2366. It even appears to expand to include it though it is possible this is a coincidence and NGC 2366 lies either in front or behind the halo. Still, it may have caused it if a separate galaxy passing by.

The obvious galaxy in NGC 2366 above the star-forming region is 2MASX J07284539+6912186 but I couldn\'t find anything on it. Though it likely resides hundreds of millions of light years beyond NGC 2366. There are dozens of anonymous even more distant galaxies in the image.

This is an early image of mine when I didn\'t know how to control stars and prevent blowing them as well as the HII region of NGC 2366 from blowing out and saturating. Nor did I know how to combine Halpha data in a galaxy image. Another for the retake list that may not happen. 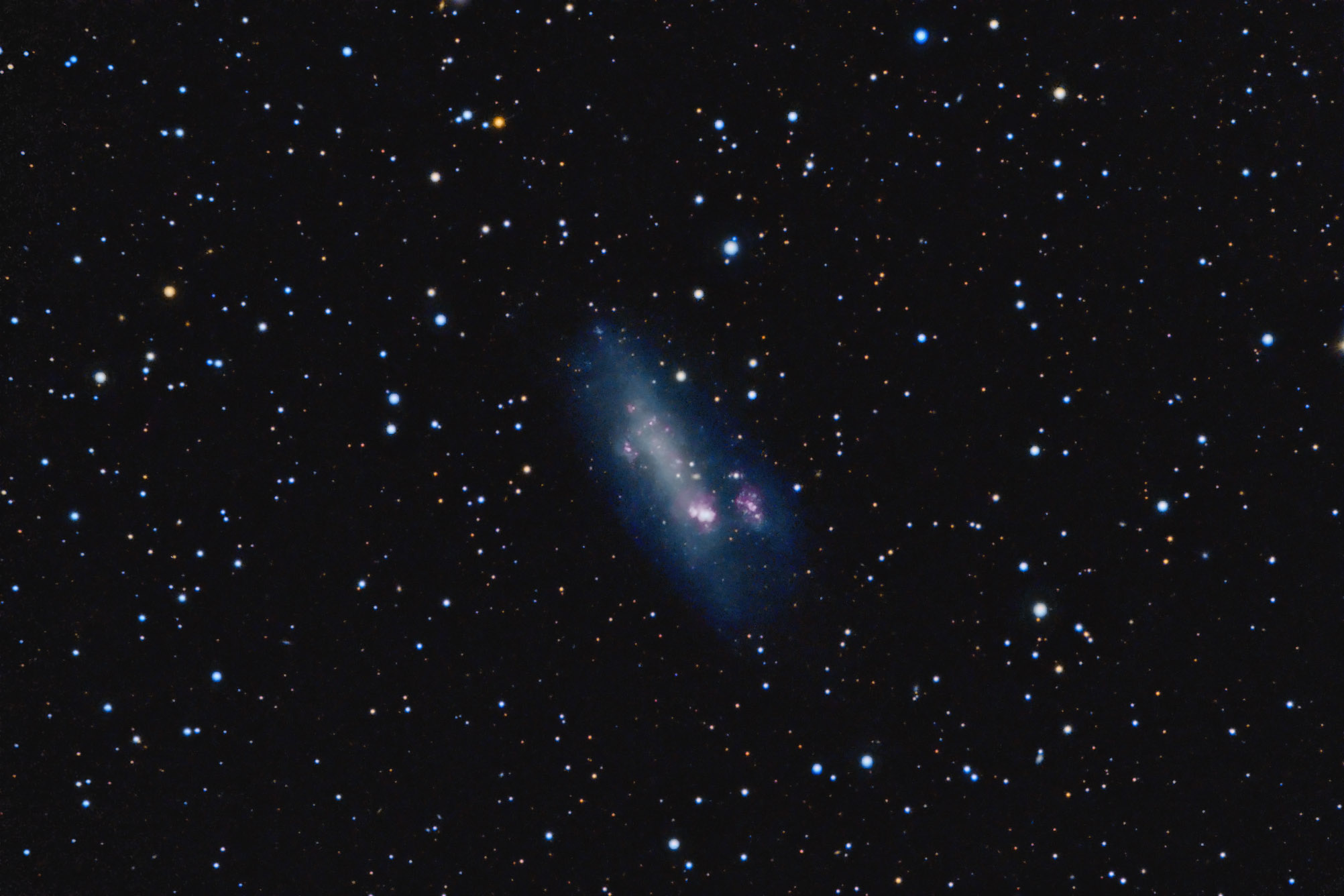