NGC 2415 is a strange galaxy in Gemini or is it Lynx? Some sources say Lynx while others say Gemini. The Sky puts it about 50 seconds of arc south of Lynx and thus in Gemini. In any case, it is about 180 million light-years distant by redshift. Many sources classify it as a questionable Magellanic irregular galaxy but it certainly has well defined, if peculiar, spiral arms. Several notes at NED say it is a double galaxy showing no tidal effects. I don\'t know if they mean two galaxies in the same line of site or it is a merger of two. I have trouble seeing either but it is very bright and in many images, including mine, seems to have two cores. The one to the right is actually a star cloud when seen at a higher resolution than I had this rather poor night.

It was discovered by William Herschel on March 10, 1790. When son John recorded it (date unknown) he described it as \"pretty bright, considerably small, round, very gradually very slightly brighter middle, mottled but not resolved, almost planetary nebular\". In many images, much of it is burned in much like planetary nebulae often are in survey images. It is in the second H400 program but my log is lost and I left no other notes on it. My memory doesn\'t go back to the 1980\'s all that well.

Turns out the tower of babble got me again. I\'d already picked this one up back in 2009 when imaging Arp 250. That is the odd double galaxy to the upper right. I carried it originally in my 09-04-09 update. That image can be seen at http://www.mantrapskies.com/image-archive/ARP_GALAXIES/ARP250/ARP250L4X10RGB2X10X3R.JPG. It was taken during my \"blue period\" when I didn\'t do G2V color balancing right and everything came out too blue. Conditions for it were a bit better so it goes a bit deeper with better contrast as I was imaging through high clouds for this image.

The field is not well studied for galaxies being in the Zone of Avoidance but some galaxies had redshift data. I\'ve listed all in the annotated image even those without redshift data as there aren\'t that many to cover.

I find several smaller galaxies that are likely dwarf companions to NGC 2415 as they too have a similar redshift. Though the one right beside it had no redshift and the faint smudge below it wasn\'t to be found in NED or SIMBAD. It\'s likely in some catalog somewhere but with thousands to search through I didn\'t look further. Oddly NED says the spiral east of Arp 250 is Arp 250 and gives other designations for the real Arp 250. SIMBAD identifies this false Arp 250 as LEDA 2063674 but has no redshift or other distance data. The real Arp 250 is in his category for \"appearance of Fission\" and does look a lot like mitosis in progress but really is two colliding dwarf galaxies only 70 million light-years distant.

I measure NGC 2415 at about 50 million light-years in size. Not all that big of a spiral. Arp 250 is only 14,000 light-years across with each being half that size. Dwarf galaxies indeed.

NED shows the galaxy cluster Abell 0590 on the east side of the image. It is near but not centered on an obvious galaxy cluster to the northwest. I found no galaxy count for this group but Abell 590 is listed as richness class 1 which means it has about 50 to 70 galaxies in it that fit in brightness between the third brightest member and the one 2 magnitudes fainter. It has no distance measurement but is listed as distant class 6 which means that most of the galaxies are magnitude 17.3 to 18. Most in the group to the NE are fainter so where are the galaxies in this cluster. I put the label where its core is. No diameter was given but it was described as being compact. That fits the group to the northwest but nothing much is seen at its position.

The brightest member of the group to the NW is interesting. NED classifies it in some catalogs as a quasar and others as a galaxy. Considering its red color and that it has a physical size I vote for galaxy. Most say it is an HBLLAC galaxy. That stands for high energy BL Lac galaxy. This is what Wikipedia says about BL Lac objects.

\"A BL Lacertae object or BL Lac object is a type of galaxy with an active galactic nucleus (AGN), named after its prototype, BL Lacertae. In contrast to other types of active galactic nuclei, BL Lacs are characterized by rapid and large-amplitude flux variability and significant optical polarization.[1] Because of these properties, the prototype of the class (BL Lac) was originally thought to be a variable star. When compared to the more luminous active nuclei (quasars) with strong emission lines, BL Lac objects have spectra dominated by a relatively featureless non-thermal emission continuum over the entire electromagnetic range.[2] This lack of spectral lines historically hindered BL Lac\'s identification of their nature and proved to be a hurdle in the determination of their distance.\"

Those with an unusually high energy cutoff have the leading H, those with a low energy cut off have an L prefix. Other prefixes are found but these seem to be the ones that are in current use. Read more about this at https://ned.ipac.caltech.edu/level5/Urry1/UrryP6_2_6.html

Four asteroids are visible in the image, well one is really faint thanks to the clouds I had to image through. Details on them are in the annotated image. Magnitudes are estimates by the Minor Planet Center. A fifth one should have been in the image but it was labeled as needing positional data and I found no trace of it though it should have been visible if the magnitude was reasonably correct. 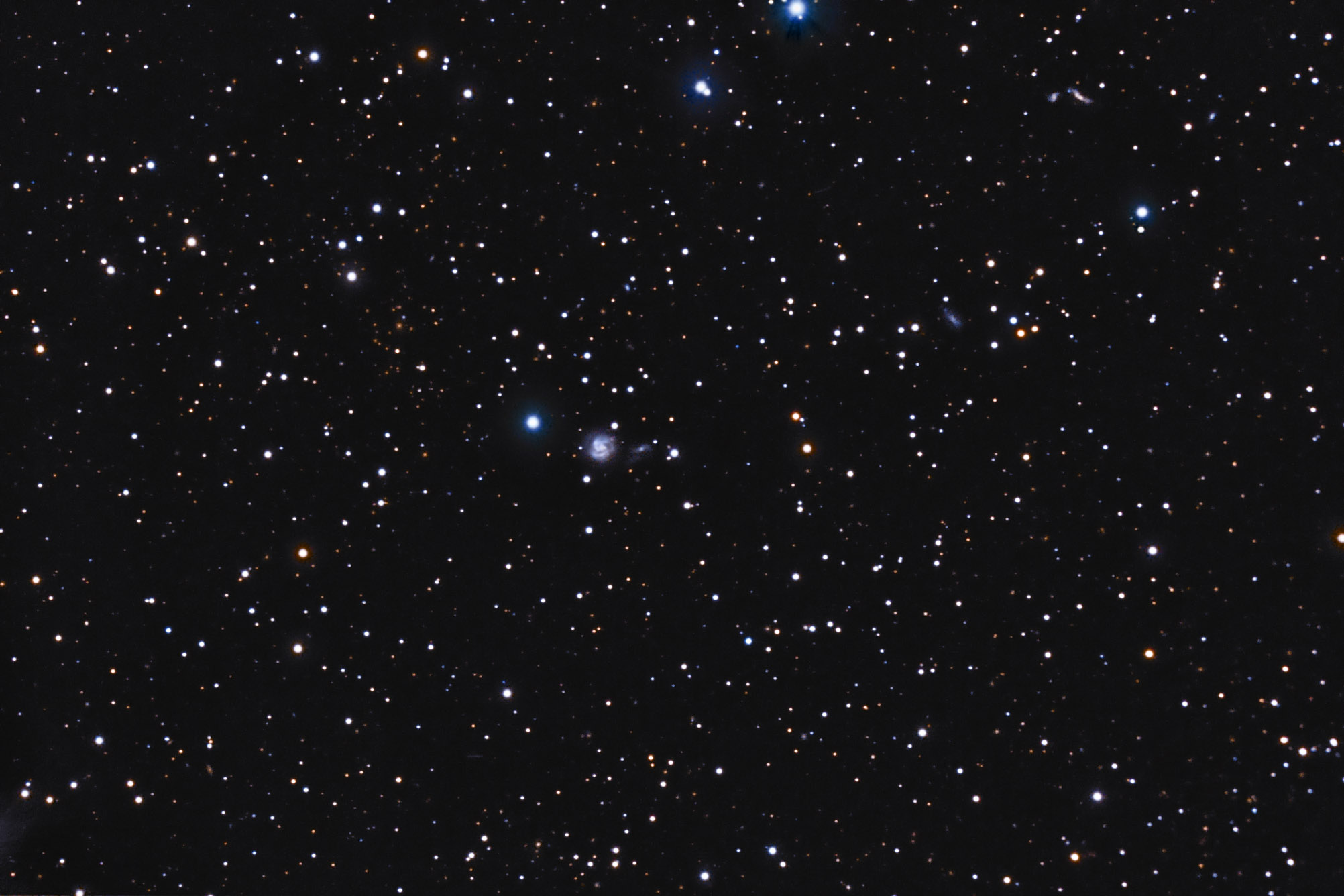 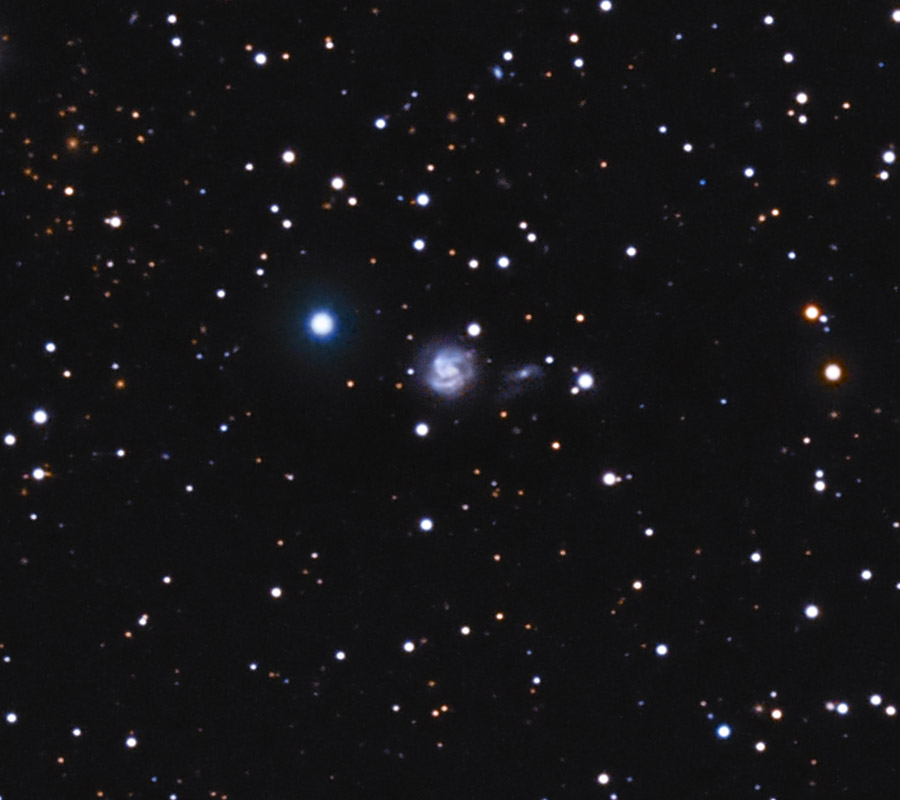 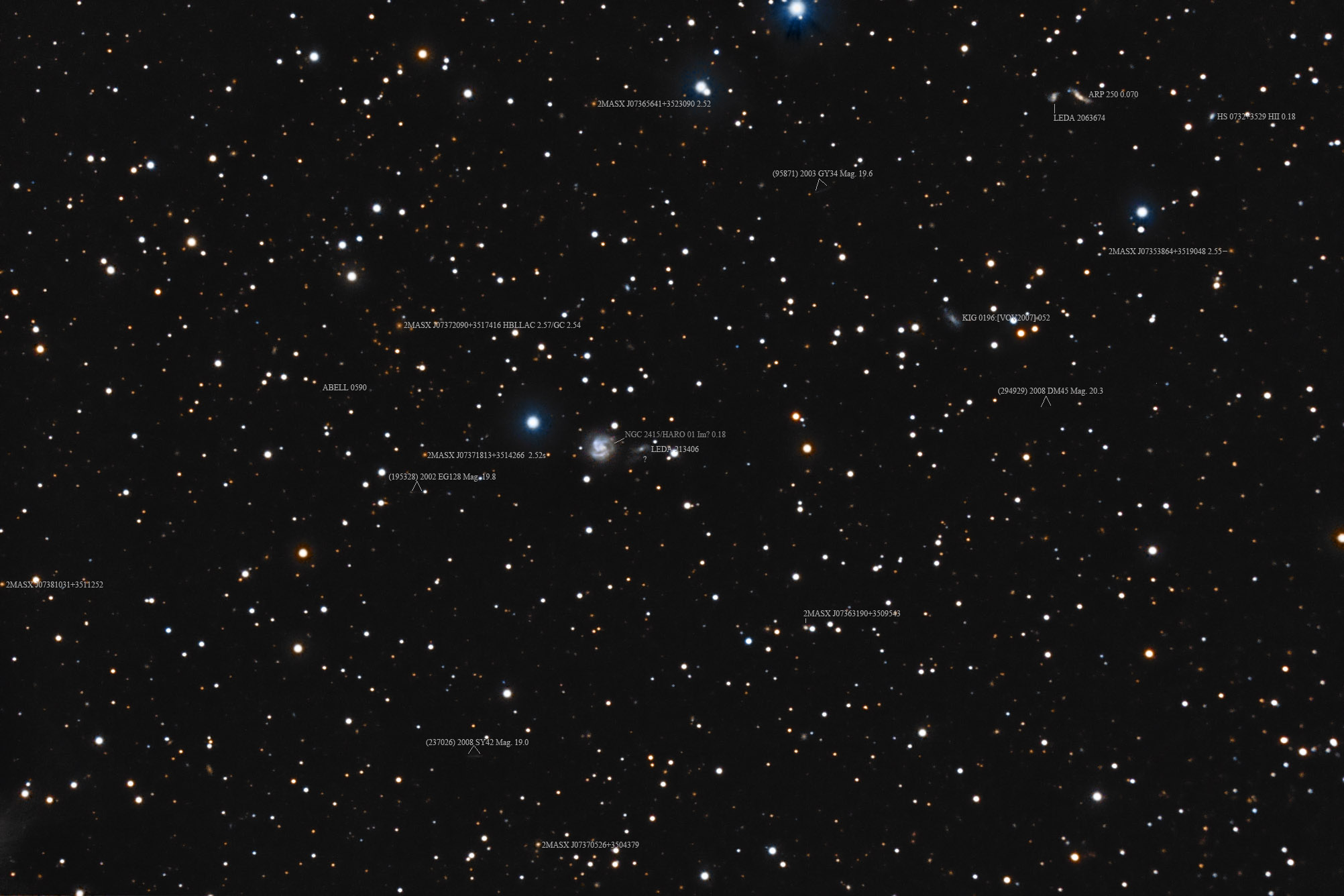