NGC 2420 is an open cluster in Gemini not far from the far more famous Eskimo Nebula. It is another Herschel 400 object I picked up. It was discovered by William Herschel on November 19, 1783 using his 18.7\" reflector. In looking this one up I found this is about all the various sources I found agree on. Even the visual description varies greatly. One using a 12\" Dob said it was mostly a smudge that became more obvious if he moved the scope -- a common way of enhancing faint visual objects. His drawing shows only the bright orange stars and none of the fainter blue ones. Yet my log says: \"Tight, rich cluster... It is a good object well worth the side trip when looking at NGC 2392\". And I was using a 10\" scope. Things get worse when looking at other factors. Various sources put it at 7 to 10 thousand light-years away. One says it is in the Perseus Arm of the galaxy, another that it lies 3000 light-years above the plane of the galaxy so wouldn\'t be in any arm of the galaxy. Its age is said to be 1.1 billion years in WEBDA but a press release by the NOAO ( http://www.noao.edu/outreach/press/pr02/pr0204.html ) puts its age as 1.7 billion years. Either way, it is unusually old for an open cluster. These are normally torn apart after much less time by tidal forces in the galaxy\'s disk. So the age, either of them, support the idea it is well above the plane of the galaxy. Of course, it will have to dive through the plane and spend some time below the plane as well but if its orbit carries it well above or below the plane then such trips would be few aiding its longevity. The NOAO release says its stars have the same metal content as the sun but they are younger. Also, its location is very odd for having the necessary ingredients to even form a cluster let alone one with this metal content which may mean it formed in the disk and somehow got its orbit changed. Could this mean it formed in some galaxy ours has cannibalized? That might explain its odd orbit but then other pieces of that galaxy should be evident and I see no mention of that. Lots more work is in order here!

The field has several \"bright\" and interesting galaxies but only two have redshift data. They appear to be related as they are less than a minute of arc apart and have almost the same redshift values. The rest have no redshift data. I annotated the brighter ones anyway. I\'d not have annotated the image at all except it contains 4 rather obvious asteroids all a bit fainter than 19th magnitude.

This image was taken over several nights. Blue data was highly focused by good seeing that was lost due to clouds. This made the blue stars much smaller than those taken other nights by the luminance, red and green filters under much poorer seeing. Even blurring the blue to try and make it match I ended up with some color fringing I couldn\'t seem to solve. Seems combining color data taken under near one arc second seeing with that taken under 3.5 arc second seeing doesn\'t work all that well. Note seeing got so bad for the luminance data I used only 3 of 8 frames taken so this doesn\'t go as deep as usual. After lots of work, this will have to do.

Please note I don\'t trust either my color balance nor that of the NOAO image. Mine is iffy due to the treatment I gave the blue data to try and match the much poorer red and green nights that may have put too much blue into the blue stars. The NOAO image seems too orange. The bright \"red\" star below the NOAO image is shown as being G0 which usually means a rather white star, not the red star their image shows. It is \"bright\" (magnitude 9.22) as it is only about 200 light-years away. 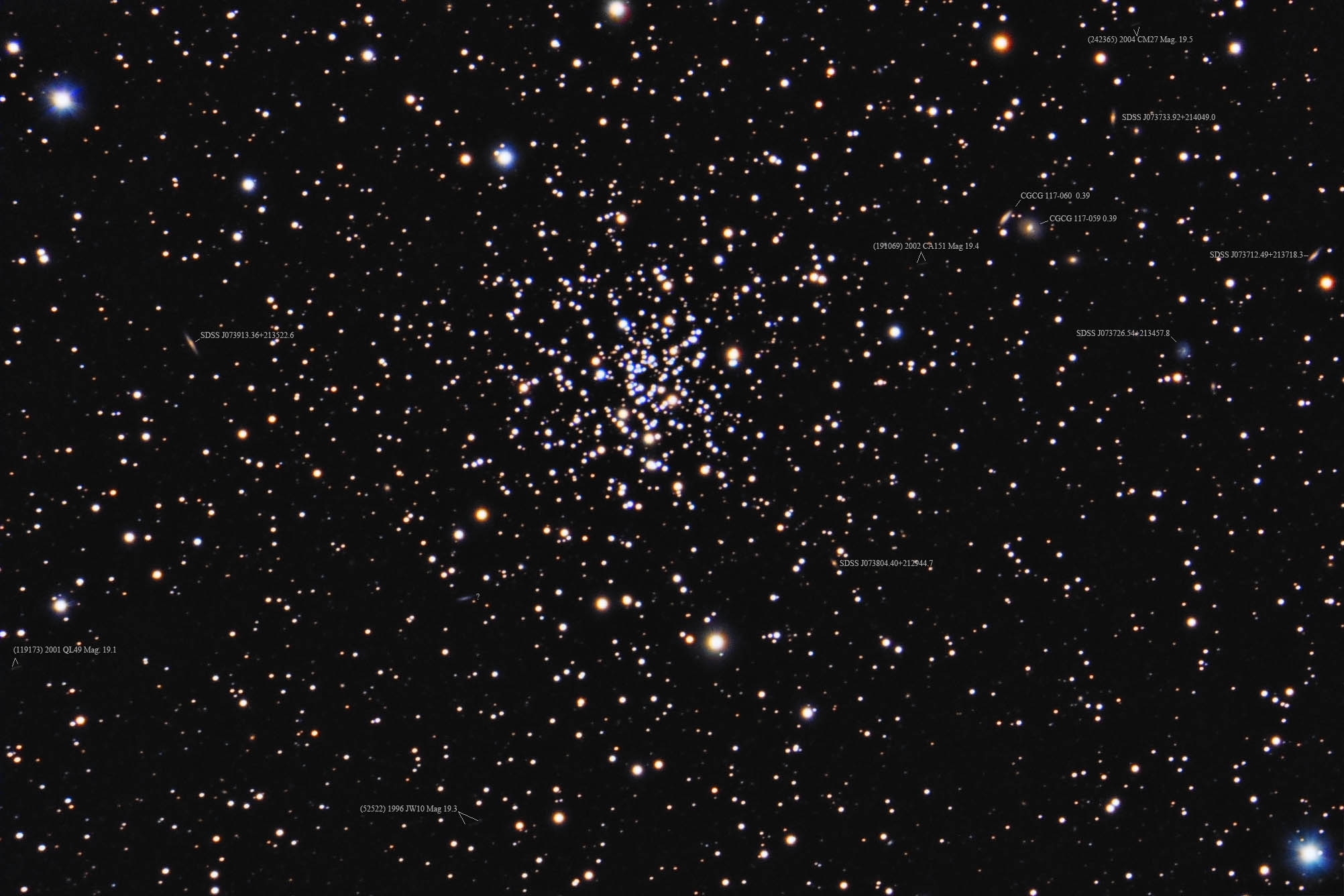 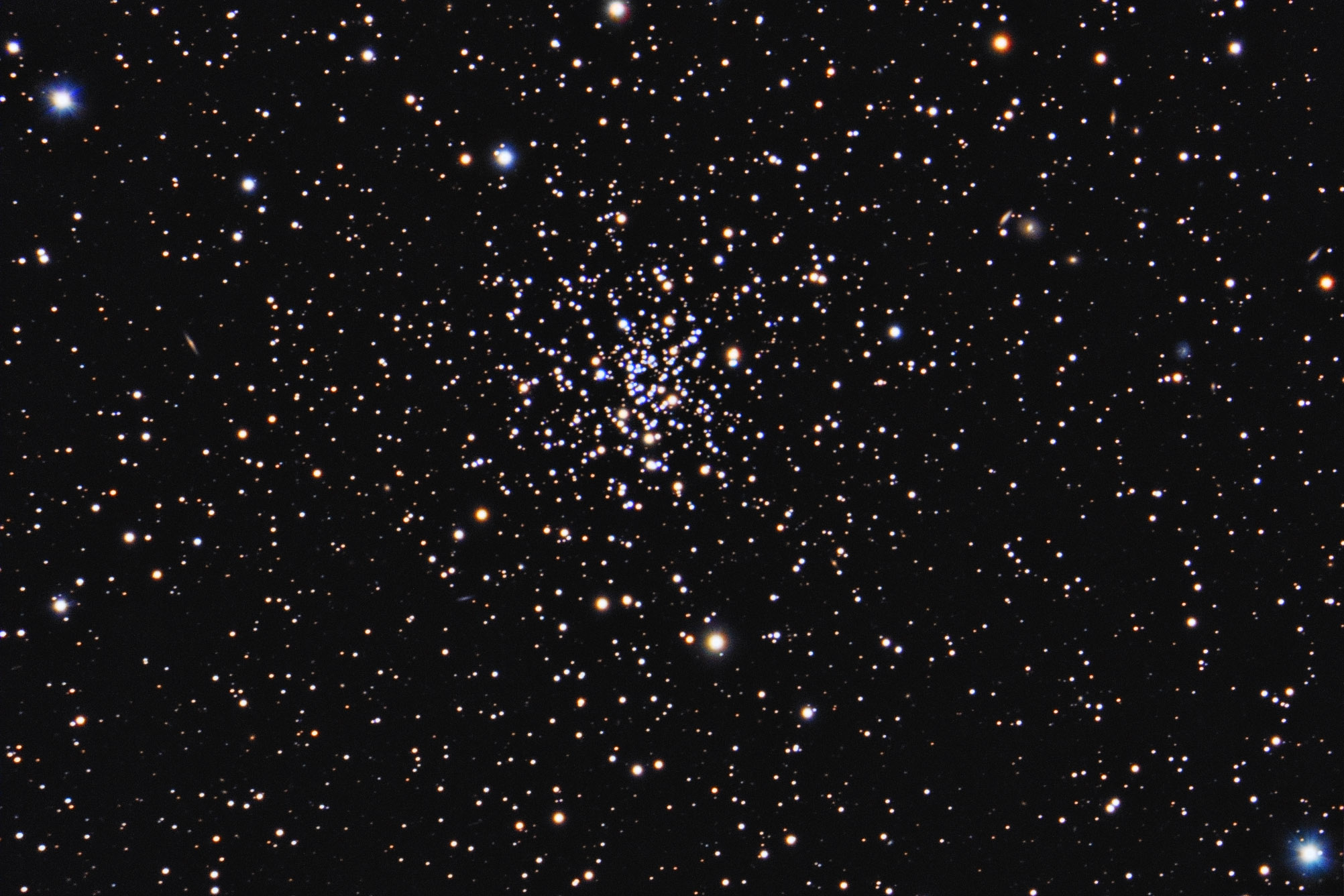