Hubble took the definitive photo of NGC 2440, a small 76\" of arc planetary nebula. Their photo was taken with narrow band imaging of various elements and thus the photo\'s colors are false but the detail tremendous. I had to work through the earth\'s atmosphere to get what little I could. Seeing was lousy making for rotten stars, with deconvolution I was able to pull some detail out of this tiny planetary. The star at its center doesn\'t show. You do see two bright regions on either side of it. The star shines with almost all of its light being in the ultraviolet part of the spectrum. Thus it doesn\'t get through our ozone layer so we can\'t really see it from earth. It is possibly the hottest star known. The surface temperature of our sun is about 10,000 F degrees. This guy has just recently puffed off its outer layers exposing the core where the fusion that powered the star took place. That went dead when the outer layers were lost exposing the super hot core. These cool rapidly so this one was caught soon after the change. Its temperature is more like 400,000 F degrees! 40 times hotter than our sun! This is why it emits mostly ultraviolet light. It is these outer layers that glow red and blue in my shot. The Hubble image can be seen at:
http://hubblesite.org/image/2058/news_release/2007-09 Their image has south up so is upside down from mine.

This is another very early image of mine taken with poor technique and limited processing skills. Also, it is three degrees below my usual 15 degrees south declination limit. This further limits my seeing considerably. It\'s been on my redo list now for some time but seeing that low just never seems to happen. The vertical elongation of the stars is due to atmospheric diffraction. I now can compensate for that in processing but couldn\'t when this was taken. This stretches the luminance stars into short streaks while the color images no longer align properly. I managed to deal with the color issue back then but not the luminance issue. Deconvolution just made that worse, in fact. Also, I severely underexposed the luminance data. This low a minimum of 60 minutes is needed but I took only 25 minutes and did so in too short of an exposure to control read noise.

NGC 2440 was discovered by William Herschel on March 4, 1790 and is in the original H400 observing program. My log from March 23, 1985 with my 10\" f/5 at up to 300x on a typical night reads; \"2 small arcs surrounded by a large elongated outer shell. Seeing was too unsteady to be sure of detail. Elongation is along the same axis the two arcs are seen on.\" Those inner arcs are the bright starlike objects in my image and are quite obvious in the HST image linked to above. 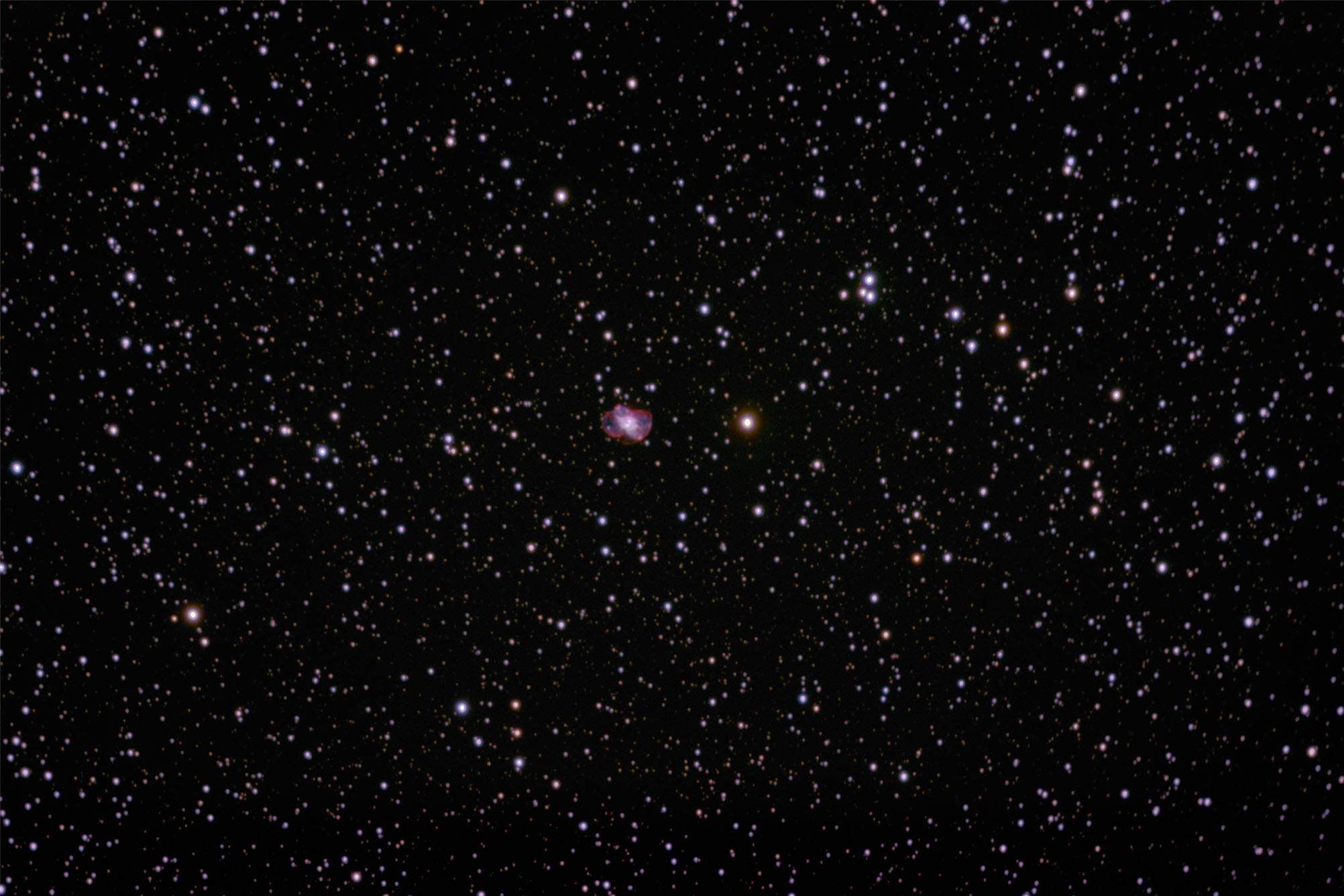