This interesting pair of galaxies is located in Cancer a bit over 3 degrees northwest of M44. They are at quite different distances so are unrelated. I\'ll start with the NGC galaxy as it is the less interesting to me of the two. It was discovered by William Herschel on January 11, 1787 but isn\'t in either of the first two H400 observing programs.

NGC 2595 is classified as SAB(rs)c at NED and is located a bit over 200 million light-years from us. At that distance, it is about 160,000 light-years across if you count the tip of the extended arm. I found these notes on it at NED:
\"Slightly asymmetric spiral pattern, no disturbing object visible\" (de Vaucouleurs)

\"Bc with compact blue core and blue spiral arms\" (CGPG)

`Barred spiral with prominent nucleus and distorted outer regions which extend to 70\" = 18 kpc radius. There are no other galaxies nearby\' (Sargent)

Yet NED indicates there is a possible disturbing object, ASK 484686.0. It looks as if it is a knot in a rather detached arm segment but NED doesn\'t indicate it is part of NGC 2595. It may be all that remains from the core of a disturbing galaxy or it may just be a star knot. In any case, it is surprising it didn\'t make Arp\'s list with the highly pulled out arm.

UGC 04414 appears to be a barred spiral with a detached ring. It is nearly 350 million light-years distant by redshift and even further away by other distance estimates. It is classed as S0a rather than a barred spiral. That might explain the inner structure, S0 galaxies can be spindles, but what about that ring? The one note at NED on it says: \"...lens with high surface brightness.\" Again that\'s the inner structure, what about the ring? I wish I knew. I found nothing on it. How does everyone ignore this well-formed ring? Maybe I\'ve missed something. If so, please let me know.

The annotated image includes several galaxy clusters. The distance to most is by photographic redshift while the distance to the Big Cluster Galaxy is usually spectroscopic and more likely the better distance estimate. Photographic redshift is indicated with a \"p\" after the distance. Also included is a galaxy group of 6 galaxies with a spectroscopic redshift that matches that of a 15 member galaxy cluster\'s big cluster galaxy. There\'s nothing seen at the position for the group but its error bar is 15 seconds of arc which does include a couple faint fuzzies but not the big cluster galaxy. Still, I think they are referring to the same object. Besides the normal collection of faint fuzzies, there is one blue quasar in the upper left corner at nearly 11 billion light-years. 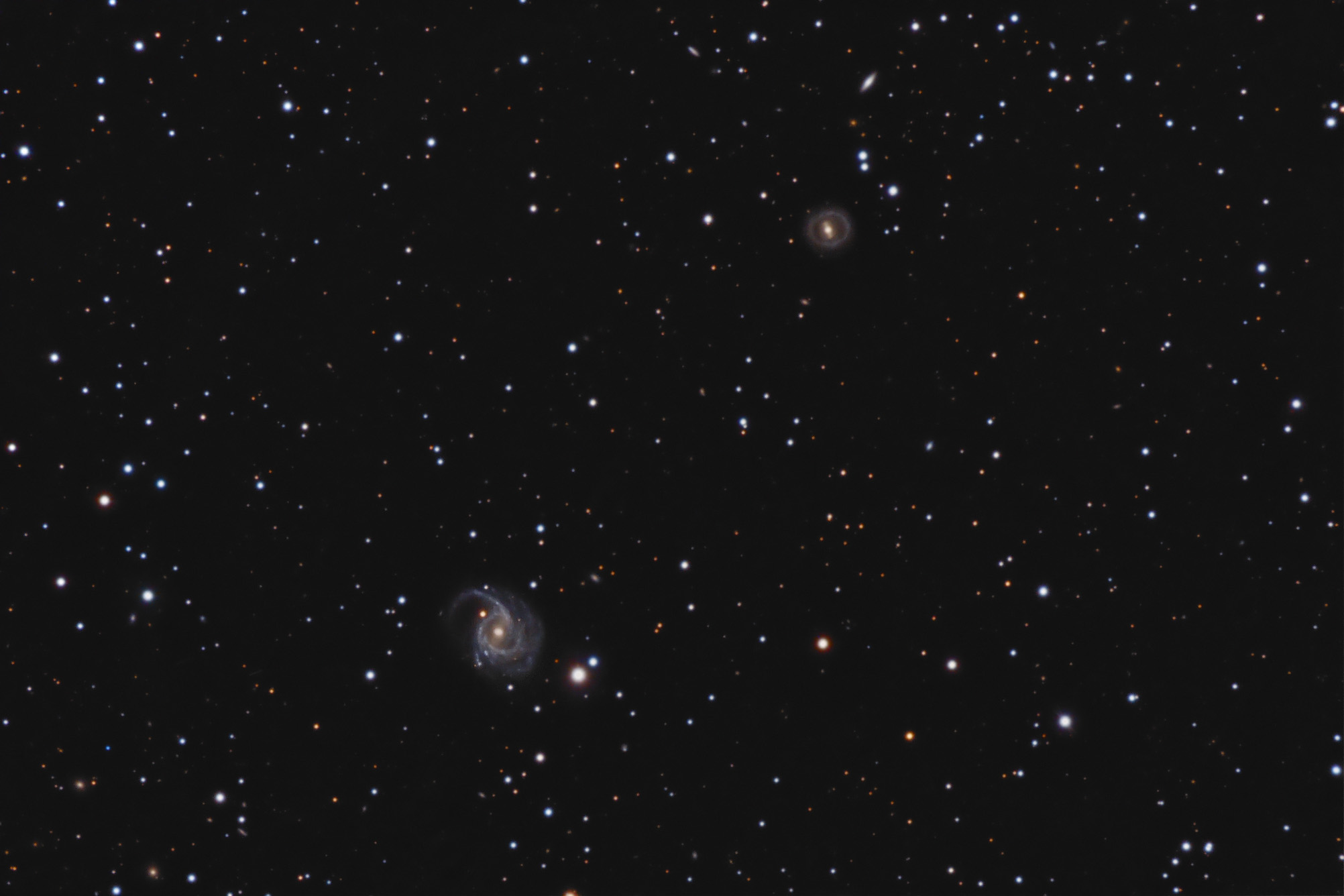 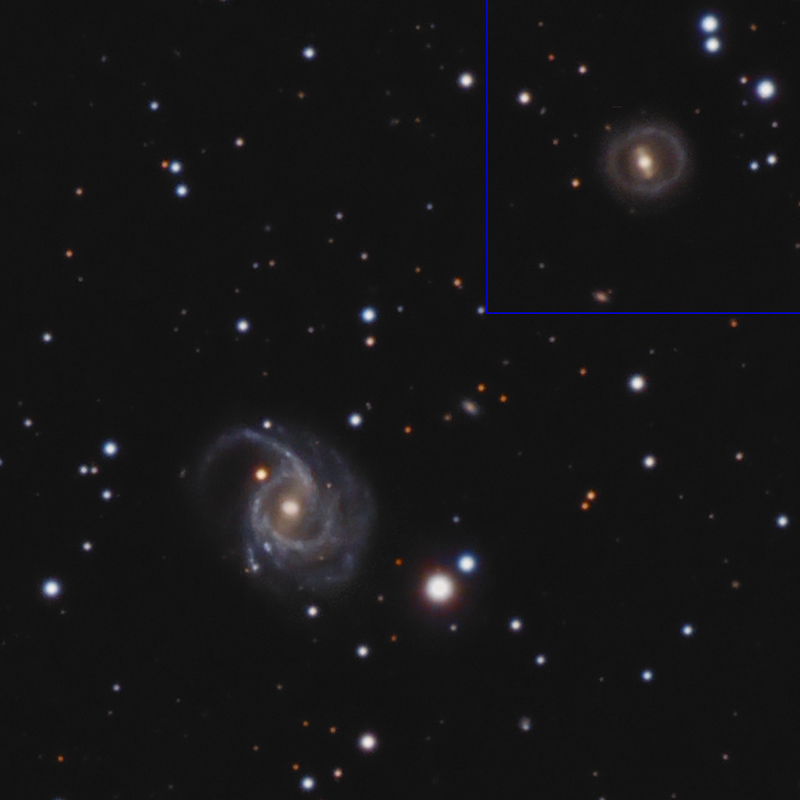 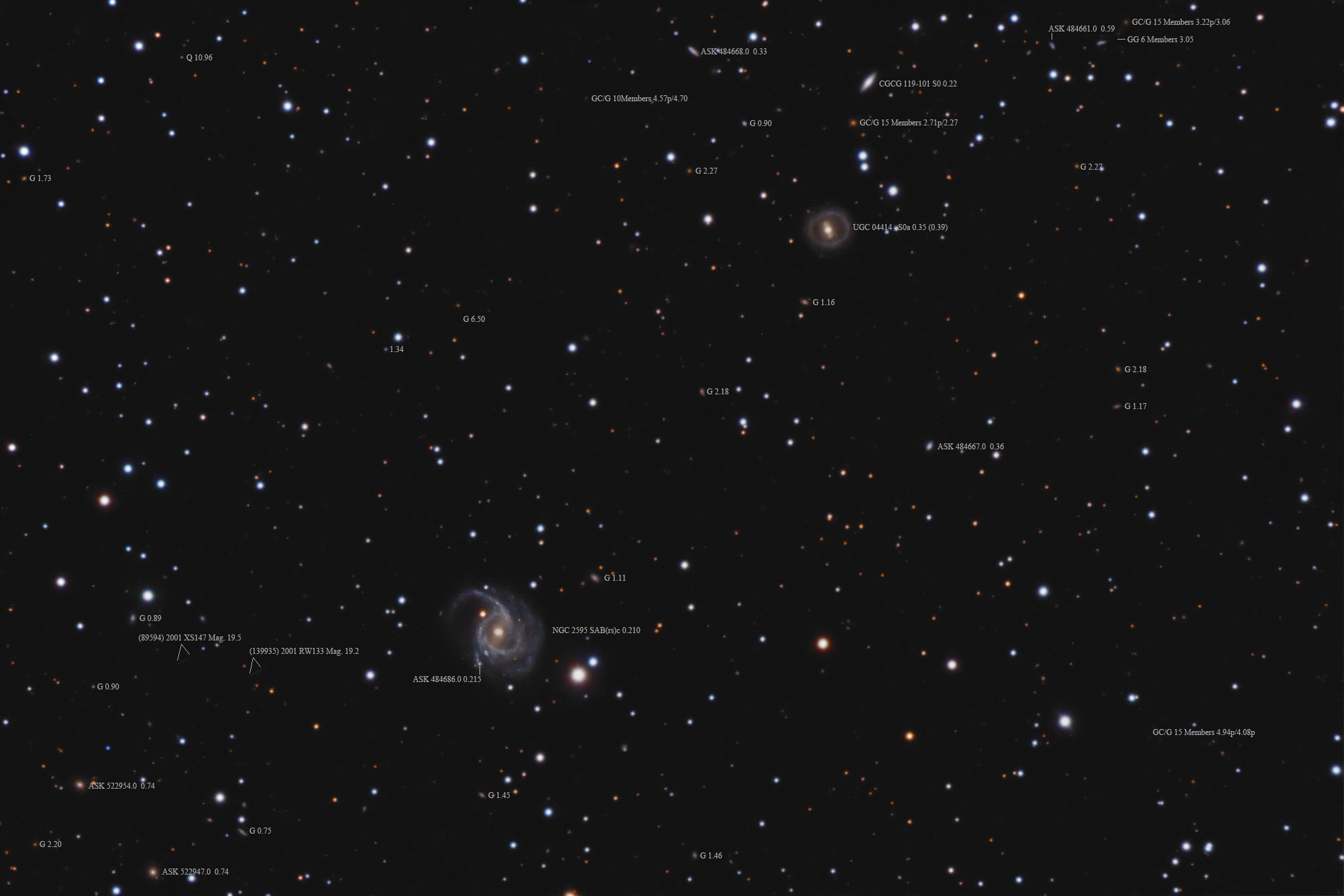