NGC 2661 is a face on spiral galaxy about 1.5 degrees northwest of far the more famous open cluster M67. It\'s 200 million light-year distance makes it appear rather small from our viewpoint but I measure it at nearly 80,000 light-years across. It is really a larger than average spiral galaxy. It is classified as an Scd: galaxy indicating its arms are spread wide. I hardly see recognizable arms, just a blue disk with one arc at the southern edge. Otherwise, I only see scattered star clouds. The galaxy is rather blue with only a small golden core region. A very old 1973 paper describes it as \"Patchy -- Asymmetric broken arms, no disturbing object visible.\" While I agree with most of that there may be a disturbing object that is visible. I say \"may\" as I\'m not so sure. NED, however, lists a round blue object, seen against it as the galaxy, ASK 610560.0. To me, it is just a star cloud same as many others in the galaxy. I suppose it could be the core of whatever \"disturbed\" it. NED usually notes these as part of a galaxy, not a separate galaxy but not always. For now, I\'m saying it is just a star cloud in the galaxy. NGC 2661 was discovered by William Herschel on March 19, 1784. It isn\'t in either H400 observing program.

What I didn\'t realize is I also imaged NGC 2664. This very sparse star group was first logged by John Herschel on March 20, 1830. WEBDA had nothing on it but a position. SIMBAD calls it an open cluster. I was leaning toward it being an asterism. I finally found this paper https://www.aanda.org/articles/aa/full/2004/46/aa1121/aa1121.html . It was looking for Open Cluster Remnants, 0pen clusters torn apart by tidal forces of our galaxy. This was one candidate of it studied 3. It concluded \"All three aggregates clearly emerge from the mean Galactic field, but, regrettably, the close scrutiny of proper motions and radial velocities reveals that we are not facing any physical group. Instead, what we are looking at are just chance alignments of a few bright unrelated stars.\" A long-winded way of saying it is just an asterism as I first thought it to be. The label in the annotated version is right in the middle of the asterism. Most catalogs would put the two bright blue stars to the upper right of the asterism outside the defined border but since it is just an asterism you can\'t be wrong either including or excluding them.

The annotated image shows the normal mix of distant objects. One has me puzzled. It is a point source listed as a galaxy south and a bit east of NGC 2661. At least it is a point source in my image. NED, however, says it isn\'t a star as it is some 25 million light-years distant by verified spectral redshift. Using their size measurements (barely beyond point source) I get a size of 220 by 360 light-years. Something is wrong here so I just labeled it with a question mark. It is SDSS J084604.26+123417.7 if you wish to solve this puzzle.

There are 4 asteroids in the image, one on the northeast edge of the asterism is very faint. The Minor Planet Center lists its estimated magnitude at 20.7. That may be slightly too faint for a moving target. Some of the distant galaxies in the image are as faint as 22.7. 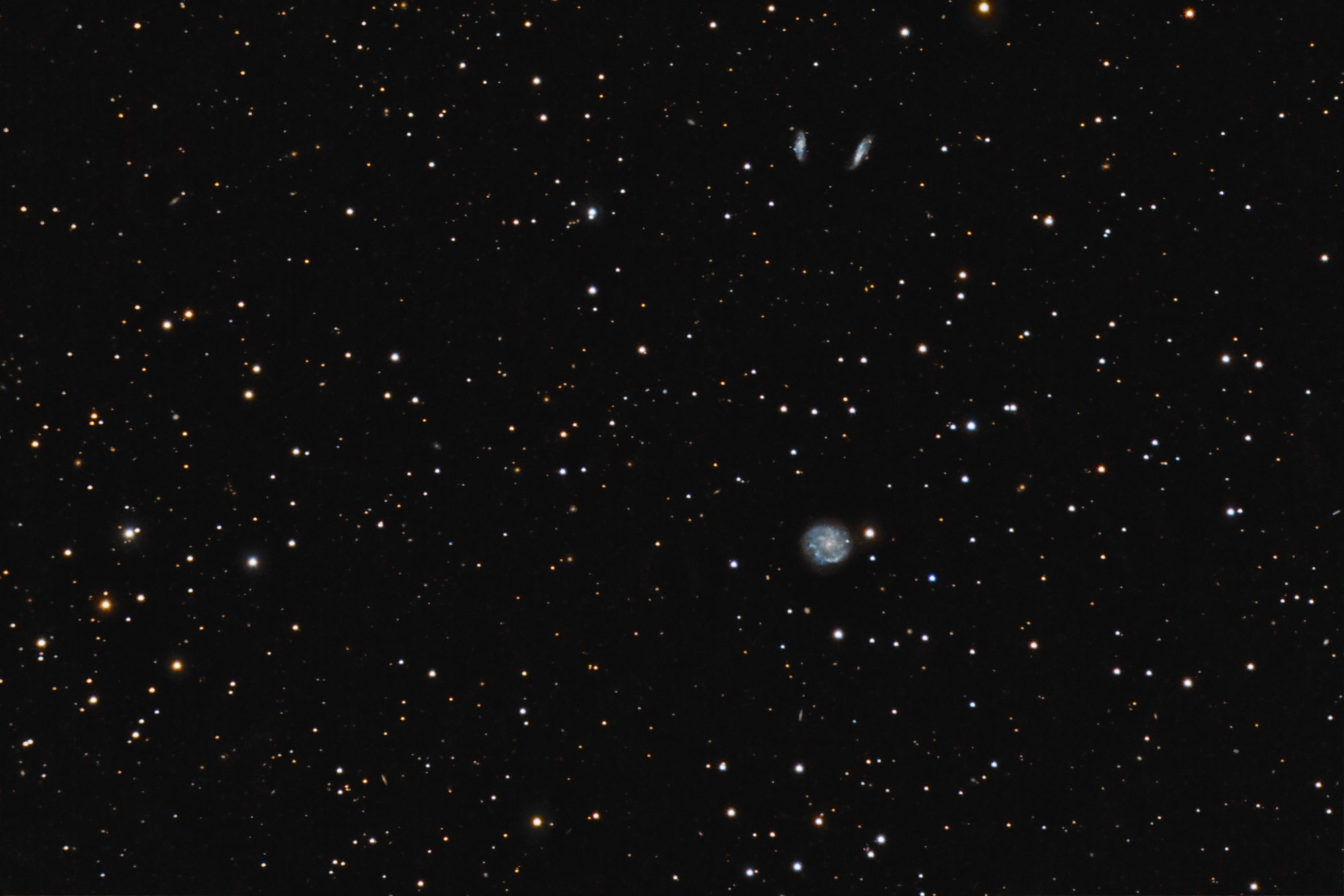 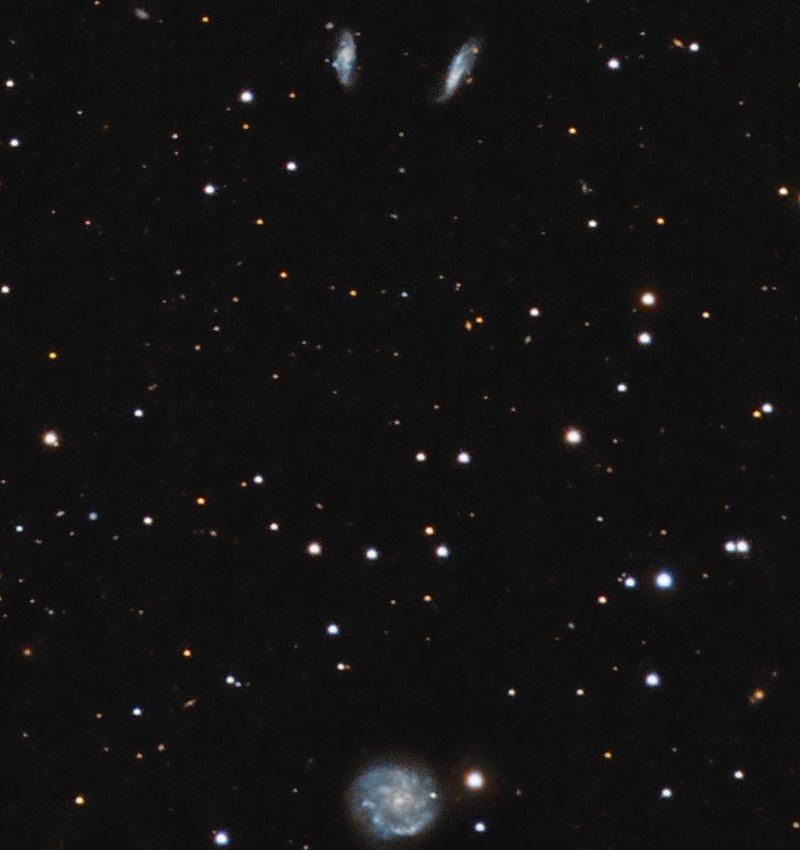 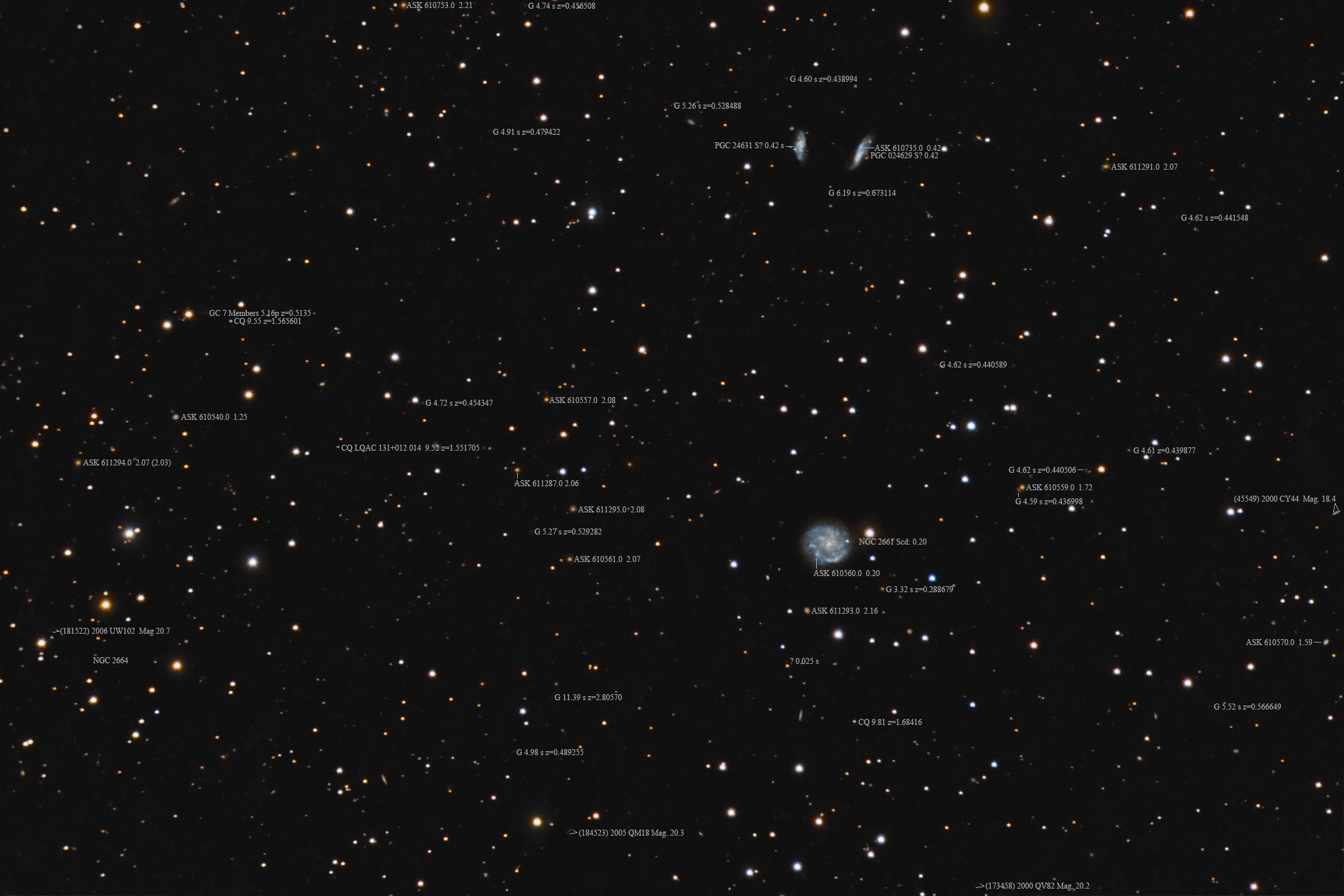