NGC 2681 is a rather odd spiral galaxy in Ursa Major some 40 to 50 million light-years distant. NED gives it the very complex classification as (R\')SAB(rs)0/a Sy3 while the NGC project says simply Sa. Notes at NED say it has 3 bars and three stellar points in the core all within one kiloparsec (3260) light-years. That would be 13 to 17 pixels in my image but I see no hint of these in my image. Resolution far too low I suspect. It appears to have undergone a starburst in the core similar to that we currently see in M82 but it is long over in this galaxy as it is dated to a billion years ago. Most likely it is due to the influx of dust and gas from a companion it digested. If all those bars and stellar points near the center are any indication it may have feasted several times. Some papers call it a LINER galaxy while others say a Low Luminosity Active Galactic Nucleus galaxy. NED says Seyfert 3. In any case, the black hole it harbors is still feeding at a steady but low level. http://adsabs.harvard.edu/abs/2001ApJ...551..197C

There\'s one apparent companion to NGC 2681 in the image; MCG +09-15-039 has about the same redshift. Unfortunately, NED has nothing else on it.

NGC 2681 was discovered by William Herschel on March 17, 1790. It is in the original H400 observing program. My log entry from April 14, 1985 with my 10\" f/5 at up to 100 power on a fair but humid night reads; \"Large, round, faint galaxy with a starlike nucleus. Arms evenly faint with no brightening until the point side nucleus is reached.\" I suspect I was only seeing the inner bright arms rather than large faint outer halo as that would be a large brightness difference before reaching the nucleus. Humidity can limit seeing fainter features like these out arms. One I need to revisit visually.

There are a lot of other galaxies in the image. Those with redshift data are labeled. The few with catalog names other than those that just list its coordinates are also listed by their most common catalog designation. There seems to be a scattering of galaxies at about 960,000 light years across the image. If their redshift is photometrically determined a \"p\" is placed after the distance. These are usually less reliable than spectroscopic determinations. Several galaxy clusters are noted. Usually, the position is the same as the anchoring \"Big Cluster Galaxy\" so I made only one annotation work for both. If the position of the cluster\'s center is different then a line is drawn to that point on the image.

Those objects designated as Ultraviolet Excess Sources (UvES) are all quasar candidates. All seem to have only photometric redshifts available. 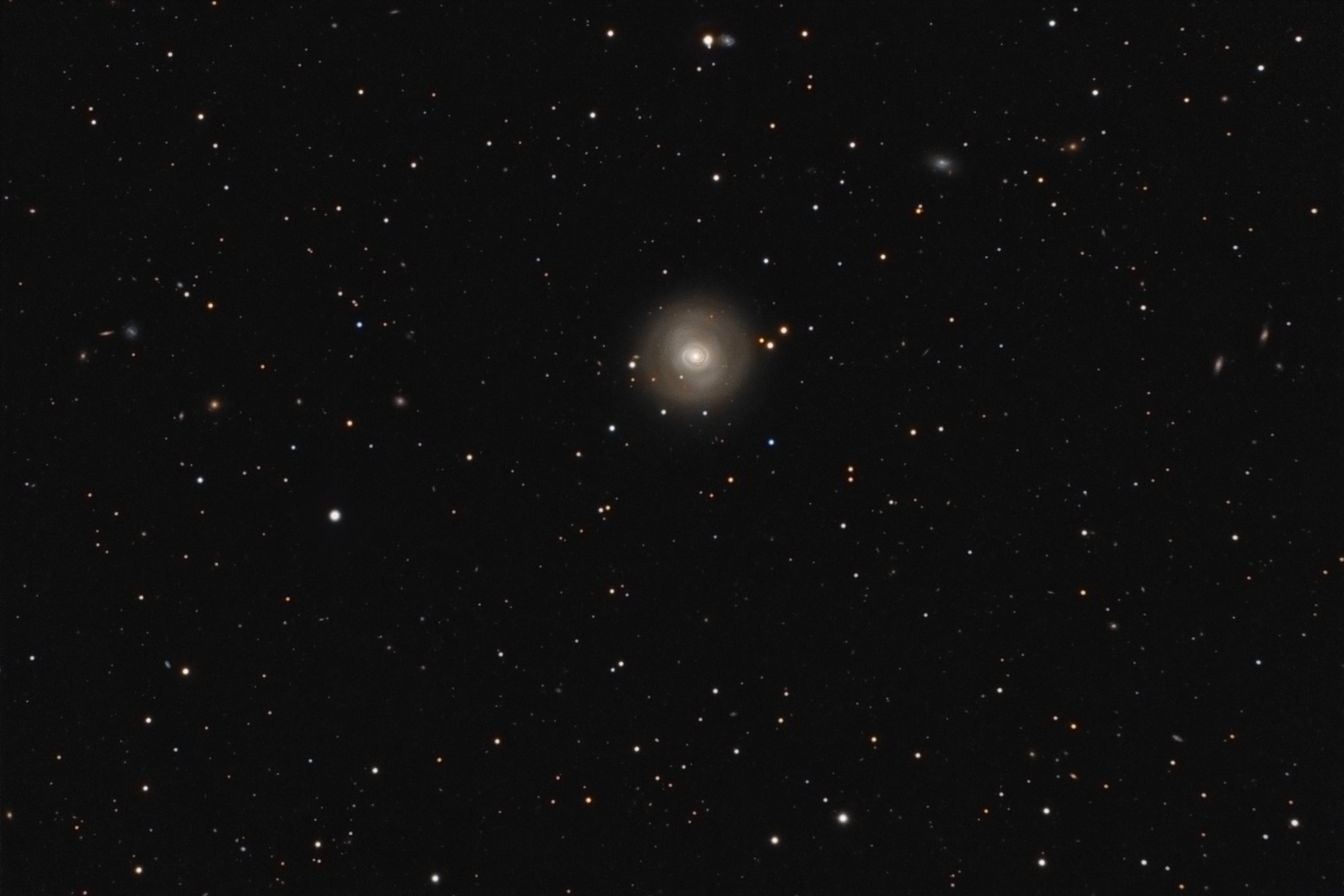 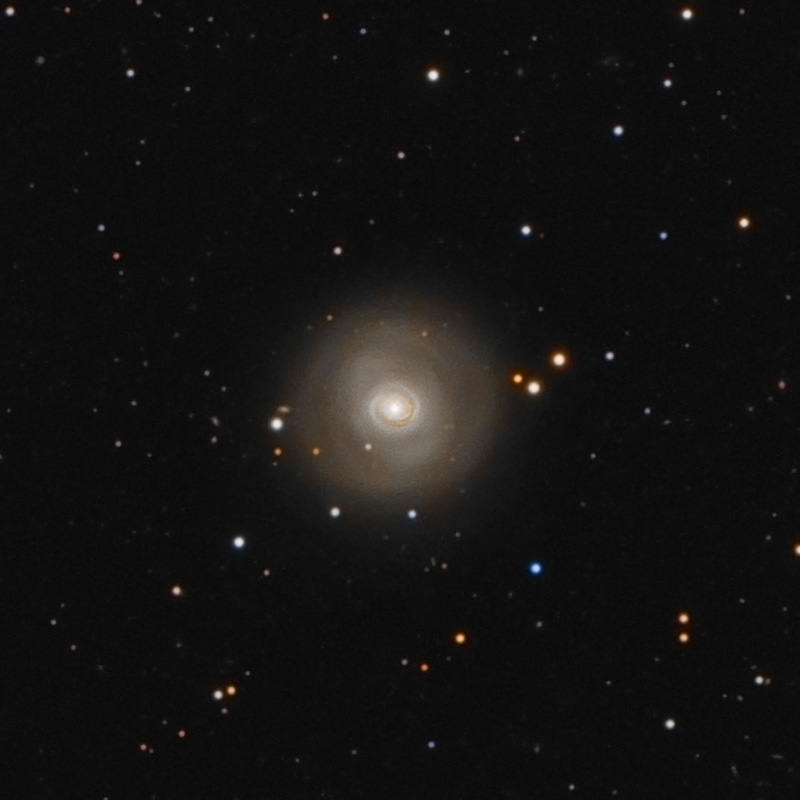 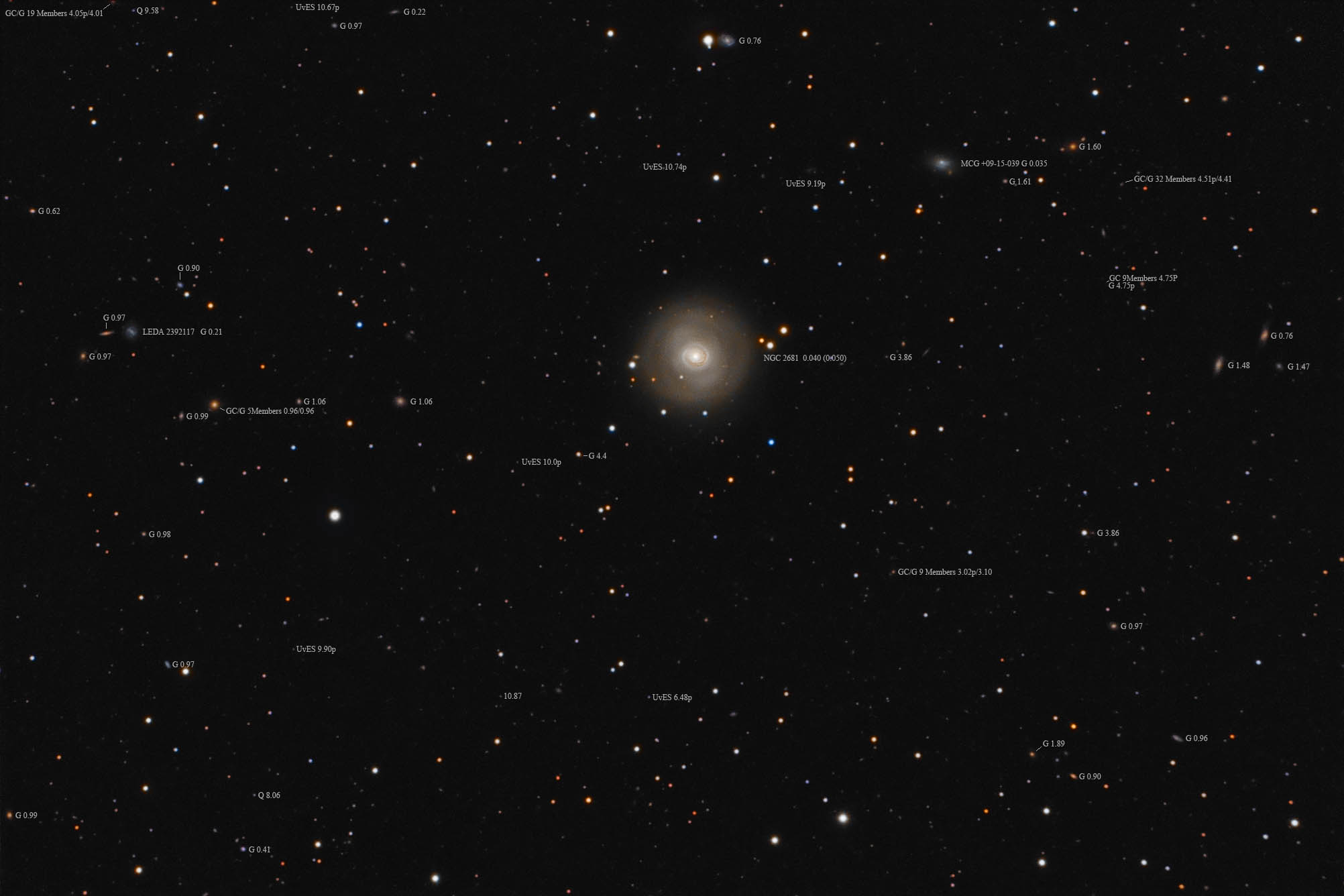