NGC 2684 is a rather non-symmetrical galaxy by the front feet of Ursa Major. Redshift puts it about 140 million light-years distant. It lies among a lot of other galaxies most of which belong to a galaxy cluster much further away. According to The Sky, it is known as the \"Pancake Galaxy\". Apparently, because it is thought to be extremely flat though it isn\'t listed in any flat galaxy catalogs and seen face on I don\'t know how you verify this. It was discovered by William Herschel on March 9, 1788. But isn\'t in either Herschel 400 list. While the outline of the galaxy is a rather nice oval its brightness falls off rapidly on the southeastern side making it look very lopsided. In fact, the blue star clouds in the arms are missing from this faded part of the galaxy further making it appear dim and lopsided. NED classifies it as S? Usually, that means there\'s a question whether it is a spiral or not but this is obviously one, I\'d say it has a pseudo ring as well. That leaves me wondering what the question is in this case. The NGC project says it is S pec. That I can agree with. Maybe NED is trying to decide if it is peculiar or not. I just don\'t know.

There are two other NGC galaxies in the image that are double galaxies, NGC 2686 and NGC 2687. They were discovered by R. J. Mitchell on March 11m 1858. Based on redshift the two that comprise NGC 2686 are at quite different distances, 710 million light-years for the large, brighter western member and 320 million light-years for the smaller and fainter eastern galaxy. Things get even more confusing at NED which identifies the western member as the bright cluster galaxy for a galaxy cluster of 22 galaxies which it puts at 1.62 billion light-years. Over twice as far away. The larger distance is the result of a photographic redshift estimate. These usually are fairly good. Maybe not in this case. More confusing my The Sky names the western member as the \"Spindle\" galaxy. It doesn\'t look at all like a spindle to me. NED classifies it as E while the NGC Project says C. Now that confuses me. C usually means a compact galaxy. I\'ve not seen that applied to large elliptical galaxies before. Is that a typo?

NGC 2687 is the pair to the northeast. The eastern member is the larger and is also listed as a bright cluster galaxy, I assume in the same cluster as its redshift is similar to that of the eastern member of NGC 2686 at a redshift distance of 670 million light-years. It is listed as S0^ at NED and S at the NGC project Its western companion is rather spindle-like (did The Sky put the label on the wrong galaxy?) but NED had no distance estimate for it. So is it a true companion or not? It shows no indication of interaction so if it is they are a line of sight pair not close enough for long enough for an interaction to be seen.

The next NGC galaxy in the image is NGC 2688 to the southeast of the others. It appears to be a member of the group at about 700 million light-years. NED calls it an Sb galaxy while the NGC project says S0. That\'s a major disagreement. Looks like Sa to my eye. The last NGC galaxy is NGC 2689. NED doesn\'t classify it but Seligman says S0. It too appears part of the galaxy group. These were also discovered by R. J. Mitchell on the same night as when he found 2686 and 2687. NED says it and the others were found by the Earl of Rosse. He did take credit for the discovery but it was made by his assistant R. J. Mitchel. The good Earl took credit for a lot of work done by his assistants. He did make the discovery possible so gets that credit but I prefer to go with the assistant that actually found it.

Several other apparent galaxy clusters can be seen in the image though I find little on them. Near the top of the image is a rather white F5 star. It has lots of galaxies around it. One is listed as the position of a 9 member galaxy cluster at 2.17 billion light-years, again using photographic redshift, Again confusion sets in as below it NED lists a bright cluster galaxy at a distance of 1.51 billion light-years. Same cluster or a different one? Then below this star and to its right are a bunch of very faint and likely very distant galaxies. Due to cloud issues, I didn\'t get enough color data to color them so they come through white. NED lists some of them but none with distance data nor any indication of a cluster they may belong to.

The image has a few quasar candidates, all with photographic redshift measurements that NED labels as Ultraviolet Excess Objects. NED indicates these are likely quasars but is apparently awaiting actual spectroscopic data before making this official. Sometimes photographic redshift can be misleading so this is a good idea.

One rather strange galaxy I found nothing on is SDSS J085520.49+490712.4 to the east of NGC 2688. It has two very elongated plumes or arms. The western one short and bright and the eastern one long and faint. Likely this is due to an interaction with another galaxy. Seeing none around that are disturbed it may be a merger situation. With nothing on it, this is purely a guess.

There are two asteroids in the image. One quite bright and obvious to the northwest of NGC 2684, the other much fainter to the southwest. Normally the color frames are seen against dark sky and barely show if they show at all. In this case, they are big and bright for the bright asteroid. This is due to the horrid sky conditions this was taken under. My sky was very cloudy which gave the asteroids a bright background to color. When I dimmed that to my usual level I left it bright for the color portion of the asteroid trail. In this case, I started with blue but conditions got so bad I stopped taking data for a bit. Then did a meridian flip and decided things were good enough for luminance so did that then just continued on with red and green. Clouds then shut me down. The trail of the 20th magnitude asteroid is more like that of one at 21.5 magnitude showing I was losing about 1.5 magnitudes to the sky this night. The bright asteroid passed right over a star during the last of the blue frame. this resulted in half the star being blue and half its true white color. I changed it back to white so the blue trail appears a bit shorter than the other colors. A blue and white star looked odd so it had to go.

The clouds made for horrid glare circles around the stars, even fainter ones had large halos. I only sort of dealt with them so don\'t look very closely at the stars. They have the remains of my heavy-handed attempt to control these halos which were different sizes for each color as the cloud conditions changed. 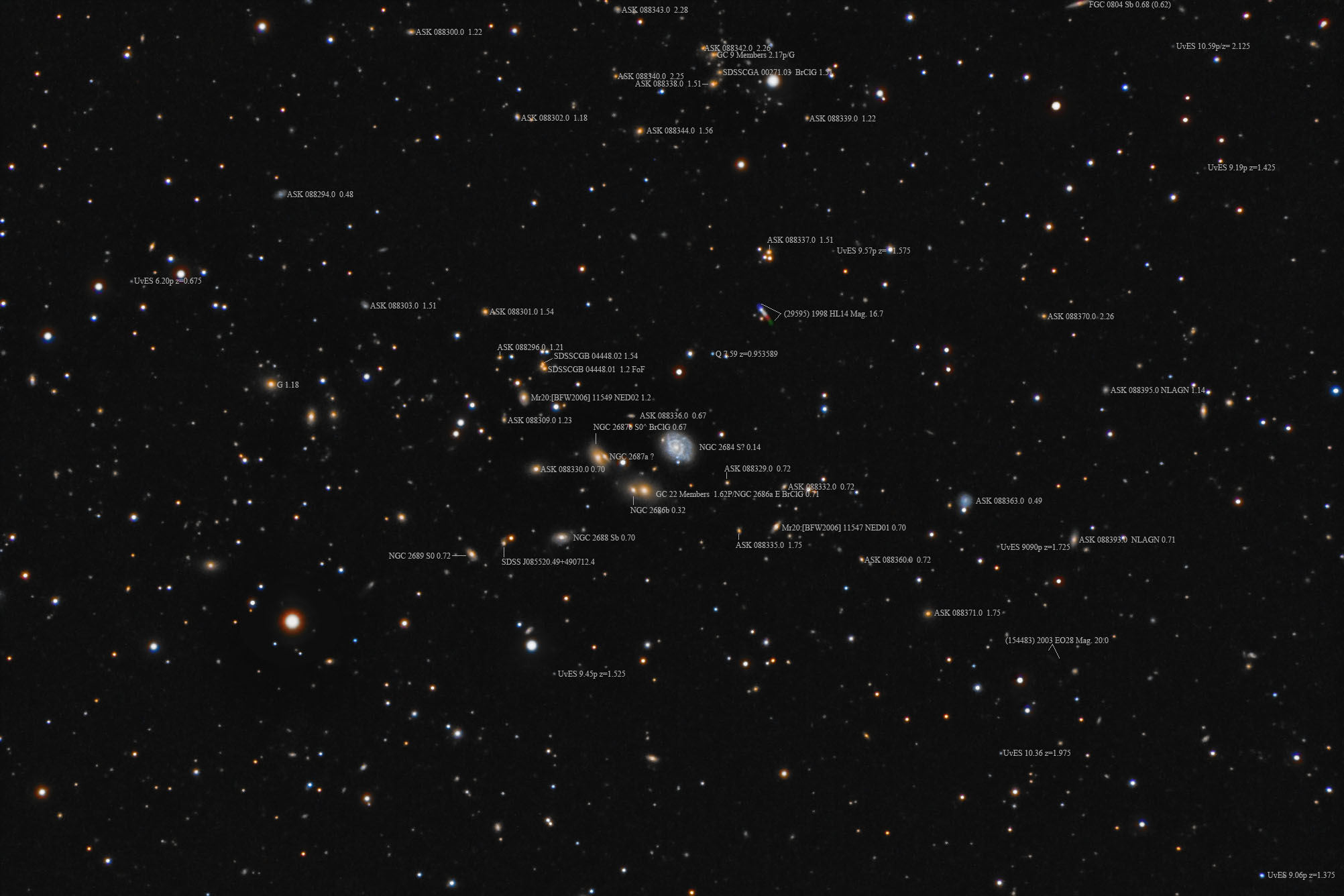 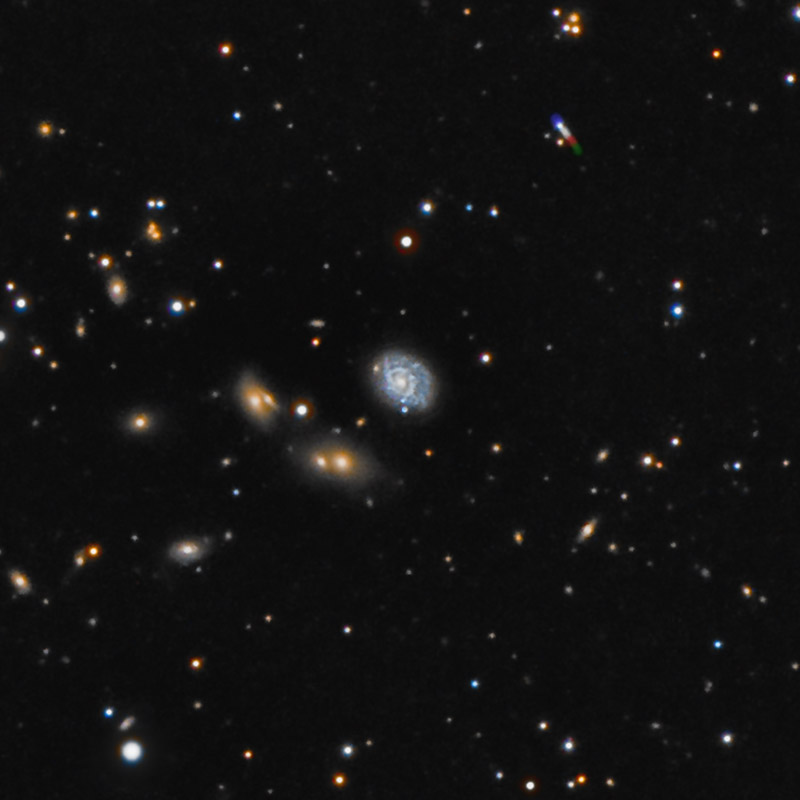 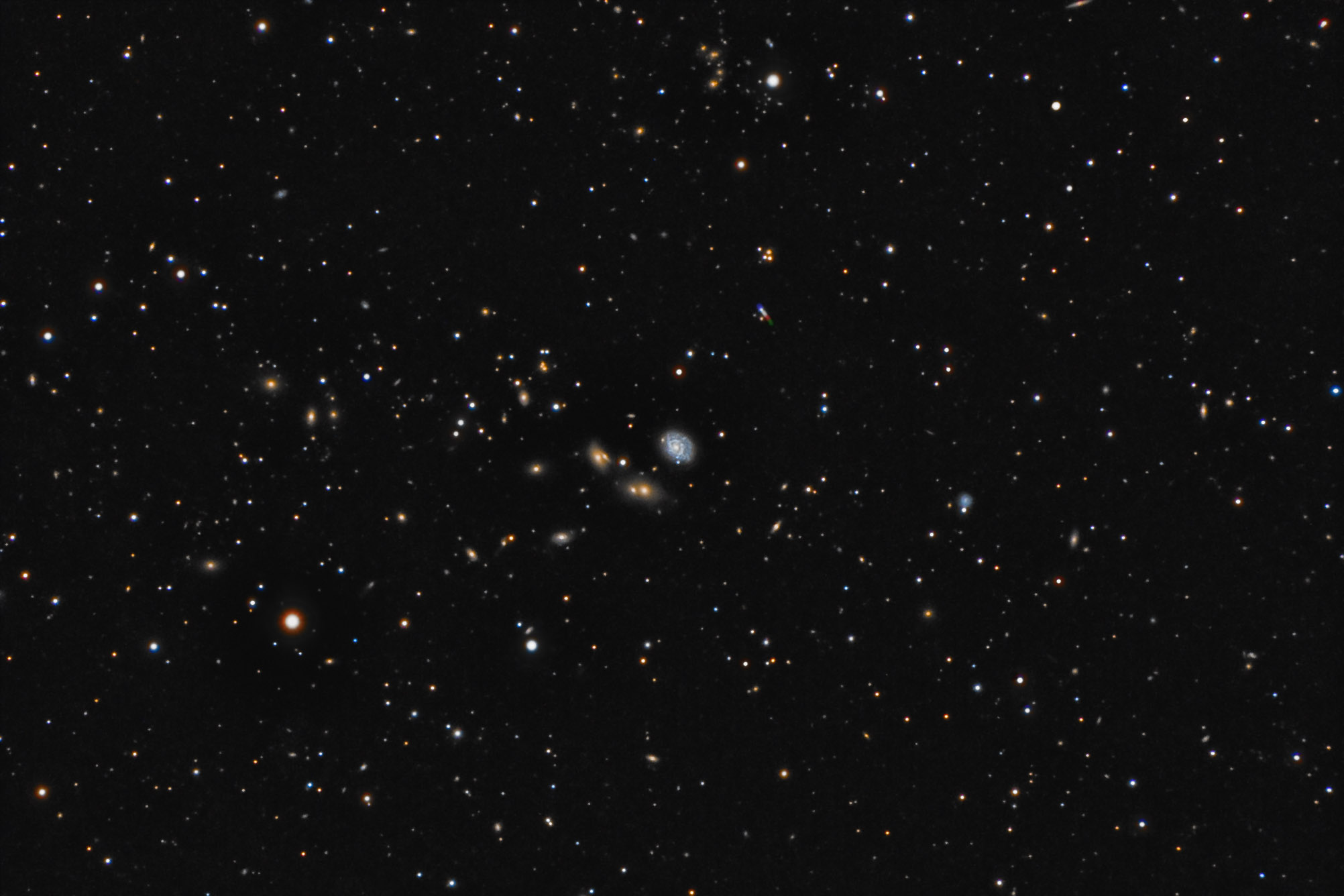