NGC 2750 is a triangular shaped galaxy about 135 million light-years distant (125 million by a single Tully-Fisher measurement) in northwestern Cancer. It\'s odd shape and two heavy arms have resulted in it being listed as two or three different galaxies. The bright arm on the west is LEDA 093099 with a distance of 135 million light-years; the two vertical knots in it listed as ASK 523821.0 at 132 million light-years and the long mostly straight arm to the north listed as LEDA 4087828 at 138 million light-years. Since this is a mostly face on spiral it is a bit difficult to explain the three different redshift determinations. If it were tilted it could be due to rotation but this must be due to different error bars in the measurements. For its odd shape, it is simply classed as Sc by all that I checked. It was discovered by William Herschel on March 11, 1785 but rather faint and not in either Herschel 400 observing programs.

The field is full of strangeness. To the north is SDSSCGB 00484 a group of 4 dwarf galaxies sharing the same halo. I found only one distance measurement for this but the error bar on its position was 45\" of arc and pointed to empty space just west of the group. Thus I put a question mark by that distance. There\'s nothing else in the area of the error circle so I think I\'m right in doing this.

To the west is UGC 4794. It is a strange looking galaxy that is classified as S? with a spectrum dominated by Wolf Rayet stars and HII emission. Its disk is very faint but it has a strong arm that takes a sudden dogleg west and a core region with three bright areas rather than the normal one. Is it the result of a merger? I found nothing on it to help with its odd shape.

High to the northeast of NGC 2750 is UGC 4774. It is only slightly more distant. It is listed as SBdm. The odd thing about it is the row of bright blue clusters in a line near its northern edge. Linear features like this and the northern arm of NGC 2750 are rare in galaxies and difficult to explain. Again I found nothing to help.

Southeast of NGC 2750 is a double galaxy or two in the same line of sight. Only the fainter northern galaxy had redshift data. It is apparently a dwarf companion to NGC 2750. Its possible companion had no redshift shown so I can\'t say if this is a true pair or not. They certainly overlap. Not far southwest of these to is another pair. The northern one is starlike and almost lost in the haze of its larger southern companion. Unfortunately, I couldn\'t find a redshift for either so that is why the question mark. West and a bit south of NGC 2750 brings us to another pair of galaxies, red ones this time, ASK 523824.0 and KIG 0293:[VOV2007]070. The former has a redshift putting it nearly a billion light-years away but the latter had none so I don\'t know if these two are really related or not. Again that results in a question mark.

The image contains a few quasars including one to the east that is listed as both a galaxy and quasar. Its PSF is that of a galaxy rather than quasar in my image so I listed it first as a galaxy. At only 3 billion light-years seeing a galaxy as fuzzy isn\'t at all unexpected though usually a quasar so outshines its galaxy the fuzz is lost in the glare.

Transparency was unusually good for this image. About what I was used to before all the gunk of the last two years moved in. Thus I was able to easily pick up galaxies down well past 22nd magnitude. The faintest with redshift listed is just below NGC 2750 at magnitude 22.3. Others I didn\'t label went past magnitude 23. This also allowed me to again pick up asteroids near 21st magnitude. The image has two of brighter than 18th magnitude and to of 20.8 magnitude. All 7 are detailed in the annotated image.

There\'s a surprising amount going on in this frame once you start looking more closely at it.

For some reason, I ended up taking an extra blue frame. I left no note. I do that when I suspect something ruined one of the first two frames but in this case, all were equal so I used all three. 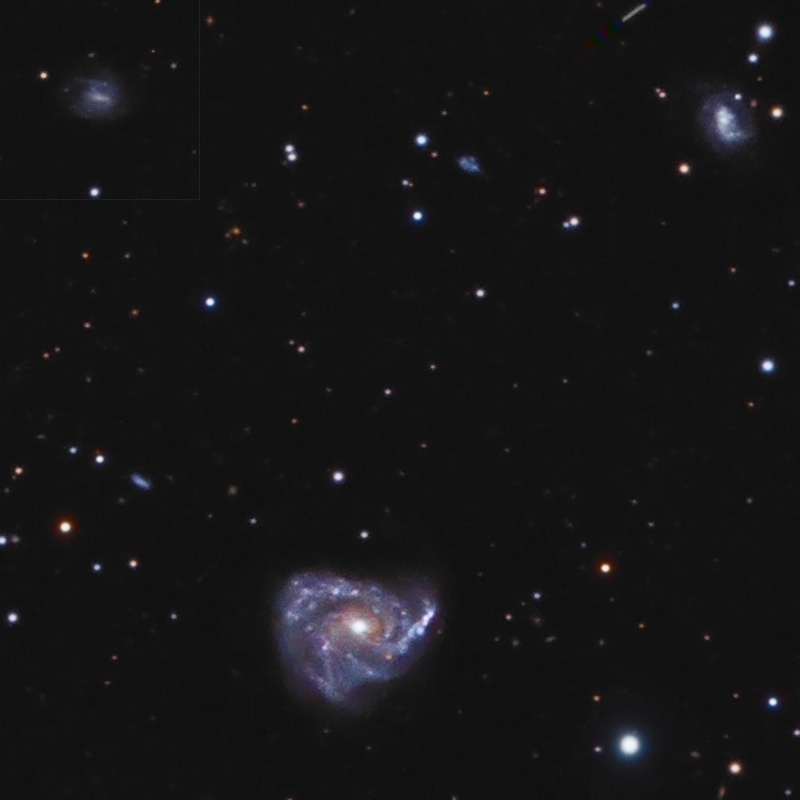 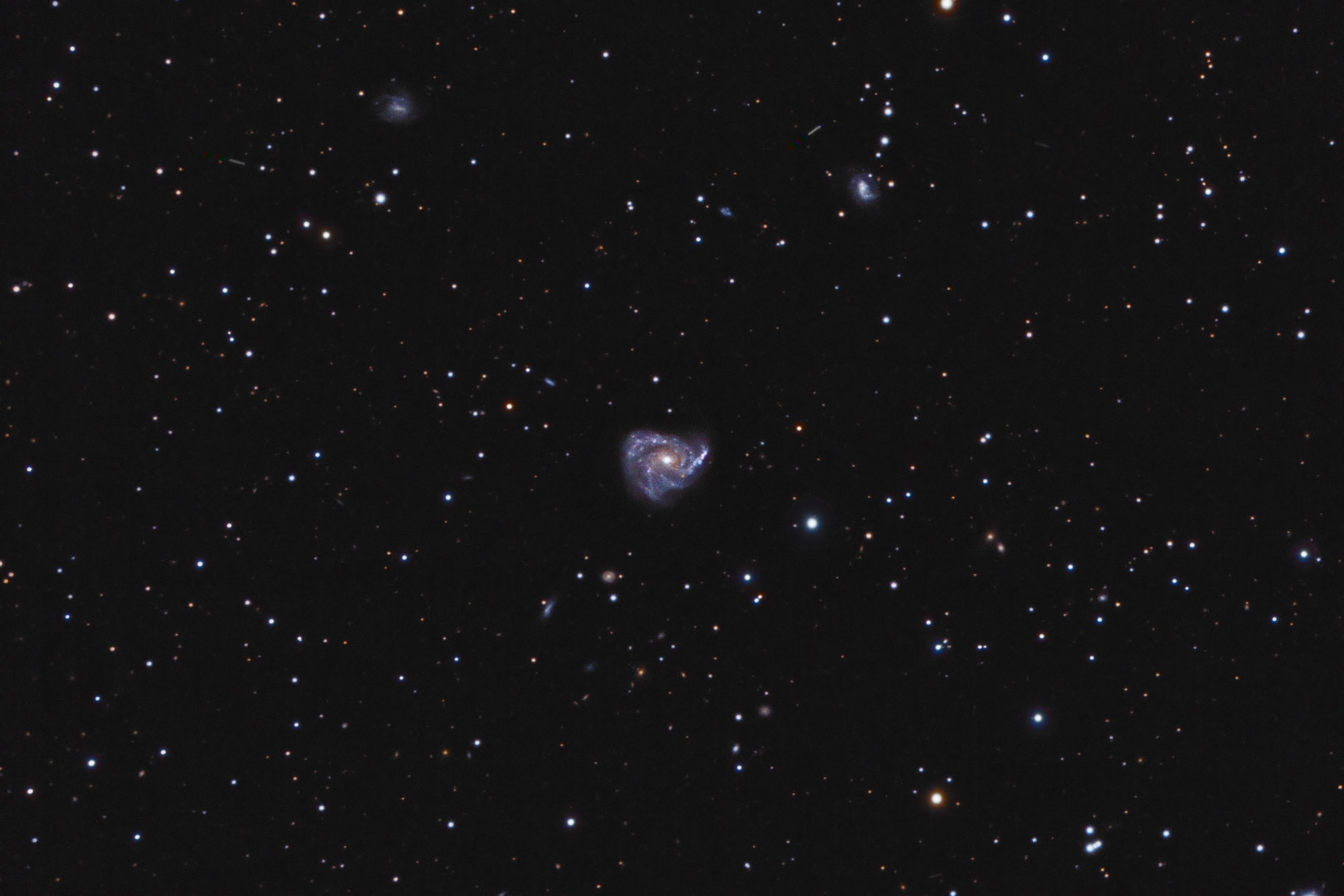 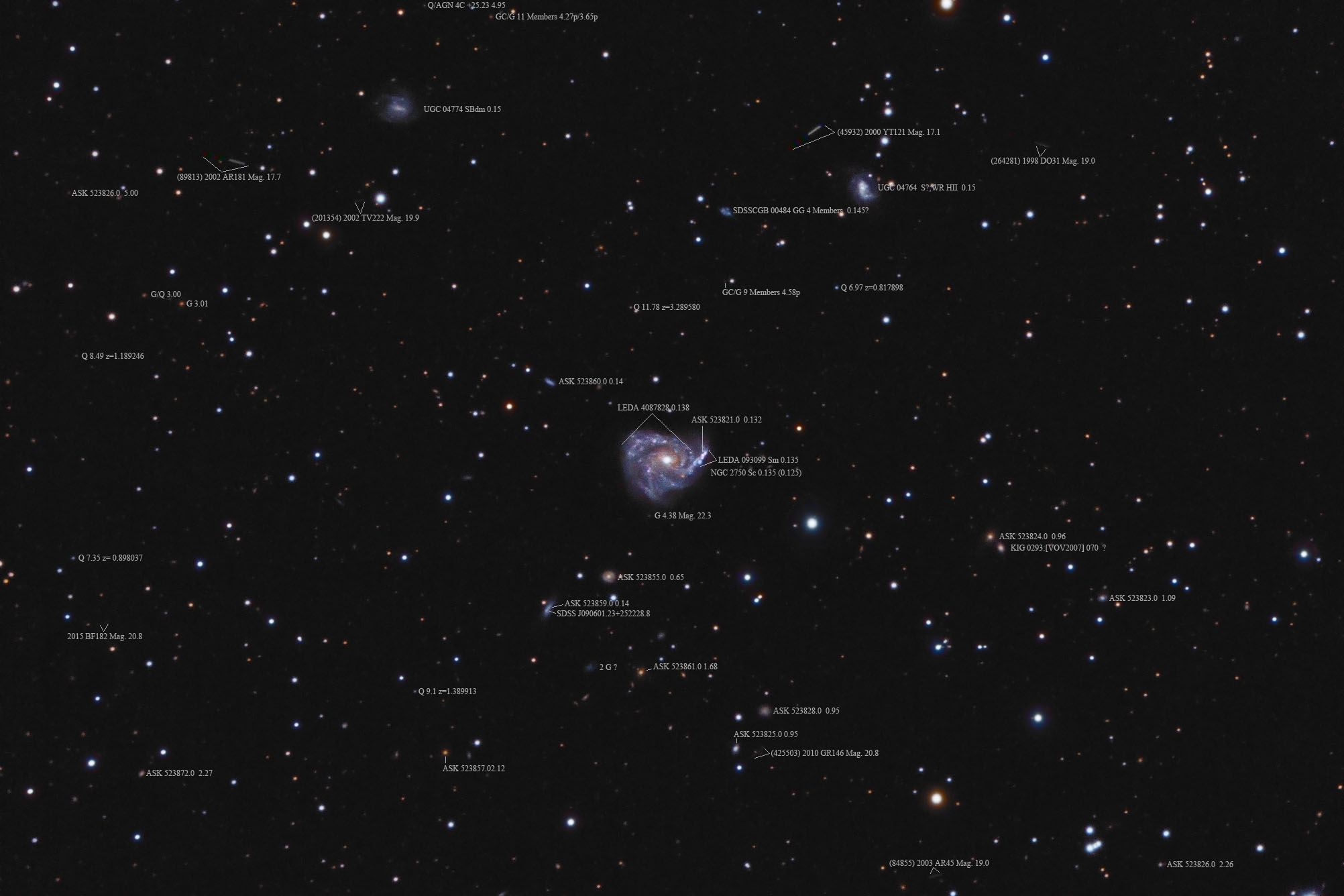