NGC 2775 is a flocculent galaxy in southeastern Cancer. Redshift puts it about 76 million light-years distant by redshift and 55 million light-years by a Tully estimate. NED classes it as SA(r)ab AGN? The NGC Project says simply Sa. Other papers have yet other opinions including Sa(r), S0/a. It is a strange galaxy in that the core region is nearly featureless with a star-like point at the core. After a rather evenly bright, featureless disk there\'s a dust ring followed by flocculent arms. Then another dust ring separates these rings from a featureless outer band that fades away. Longer exposure time would likely trace this area out further but add no detail. The contrast of the galaxy seems very low as if viewed through a mist. Could this be due to a huge spherical halo of stars around it? Seems quite possible but I found nothing much about this in the literature I read. If its distance is about 76 million light-years it is some 110,000 light-years across, a large spiral.

It was discovered by William Herschel on December 19, 1783. It is in the original H400 program. My log from April 14, 1985 with my 10\" f/5 on a humid night at up to 100x reads; \"large, round galaxy, gradually brighter toward the starlike nucleus.\" I suspect the humidity prevented me from seeing its full extent.

An odd red object is seen in the middle of the flocculent rings to the southwest. It is listed by the Sloan survey as SDSS J091019.53+070141.2 and at a redshift distance of 82 million light-years. NED lists it as a separate galaxy rather than part of NGC 2775 but gives it a maximum size of 0.04 minutes. This translates to a galaxy of only about 950 light years in size! A dwarf galaxy indeed. The red color in the blue of the flocculent arms certainly would indicate it could be a background (or foreground) dwarf galaxy of old stars. Unusual to see a red dwarf, however. Could the red be due to seeing it through a lot of dust in NGC 2775? Nope turns out there is a much simpler solution. I found this HST image of the galaxy:
http://cseligman.com/text/atlas/ngc2775hst.jpg It is oriented the same as mine. Note it is just a foreground star. Apparently, the redshift comes from NGC 2775\'s spiral arm, not the object/star. Sometimes the pros get it wrong it would appear.

NGC 2775 has a small companion, NGC 2777 to the northeast. It has a similar redshift to NGC 2775 so likely a true companion. NED classes it as Sab? NGC project says Sb-. Seeing was poor for this image making NGC 2777 look rather odd. Better images show its arms are made of mostly very large star knots. It\'s these knots that give it the very odd appearance in my low-resolution image. I need to revisit this one under better seeing conditions than the near 4\" of this one. Then it would look more like a spiral. If the distance is 83 million light-years it is a dwarf spiral only 15,000 light-years in diameter.

Also in my image is NGC 2773. It has a redshift putting it three times more distant than the other two so it is not related. The distance also makes it hard to see any detail. Both NED and the NGC project class it as S?

North of NGC 2775 is the odd galaxy LEDA 213577. NED has the essential note about it saying: \"May be an interacting pair.\" That certainly appears reasonable. The two parts of this object are very different shades of blue. It has the same redshift as nearby NGC 2777 but even smaller. If two galaxies they are really dwarfs. End to end the object is only 11,000 light-years long at 84 million light-years with the bright blue object being less than 5000 light-years across. These sizes would argue against this being two interacting galaxies. A small dwarf with a large bright star knot at one end may be a more likely explanation. I\'d sure like to see a high-resolution image of this one.

There are two objects IXO 32 and IXO 33 that NED shows as a quasar, Xray Source and an AGN. One, south of NGC 2775 has a distance of only 3 billion light-years and is not star-like but shows a disk like other galaxies at this distance. On the other had the other, north of NGC 2775, is over 11 billion light-years distant and is star-like. It is also blue which is rather expected of such objects rather than the slightly red color of the close one that matches typical galaxies at this distance. I can\'t explain why this difference.

Near the bottom of the image is a very odd looking galaxy at 1.63 billion light-years, 2MASX J09104935+0653231. I put the label well to the right as there\'s faint fuzz between the label and the core of the galaxy and more fuzz doing up and a bit left of the core. This north piece is far brighter than the one going west. NED gives no clue as to what is going on here. The north going fuzz looks a lot like a faint disk galaxy seen somewhat edge on that has no core as it is rather oval in shape. The west one appears more round. Are these three objects, the result of two interacting galaxies or something else? I haven\'t a clue but it sure is strange. It appears to be part of a group of galaxies that fall into the 1.63 to 1.66 billion light-year distance range. Though I didn\'t see any listed at NED. Also, there are quite a few galaxies at about 1.8 to 1.85 million light-years in the image. They would appear to be part of some galaxy group but I didn\'t find one listed in NED either.

While NED has distance estimates for dozens of galaxies too faint to get through my poor seeing and transparency this night there are galaxies in the image NED doesn\'t even list. Three of them form an interesting knot inside the north edge of NGC 2775. Are they three interacting galaxies? Not only doesn\'t NED have any redshift data on any of them, it doesn\'t list anything at their position though far fainter galaxies (too faint for my image) are listed. I\'ve noted them with a question mark. 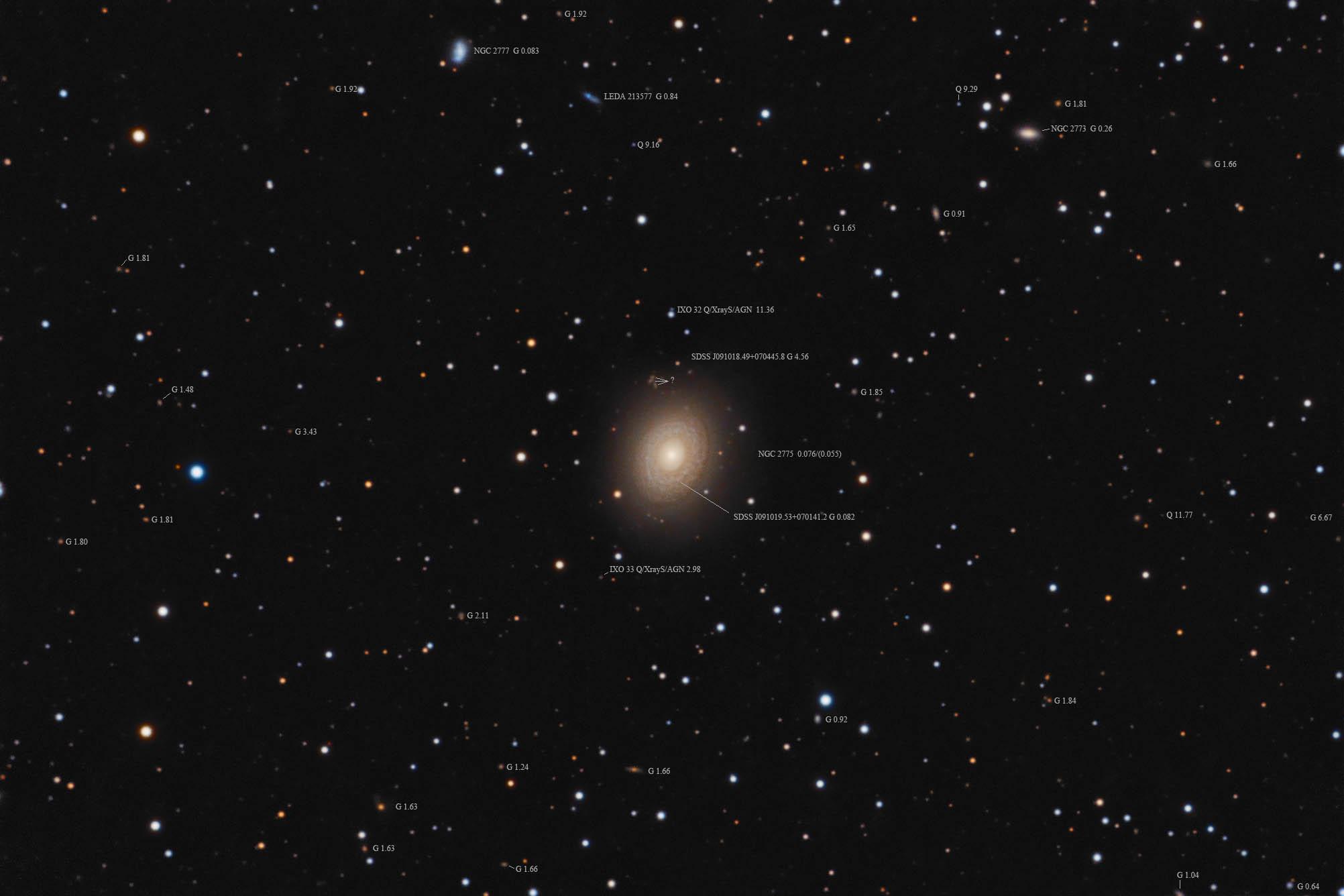 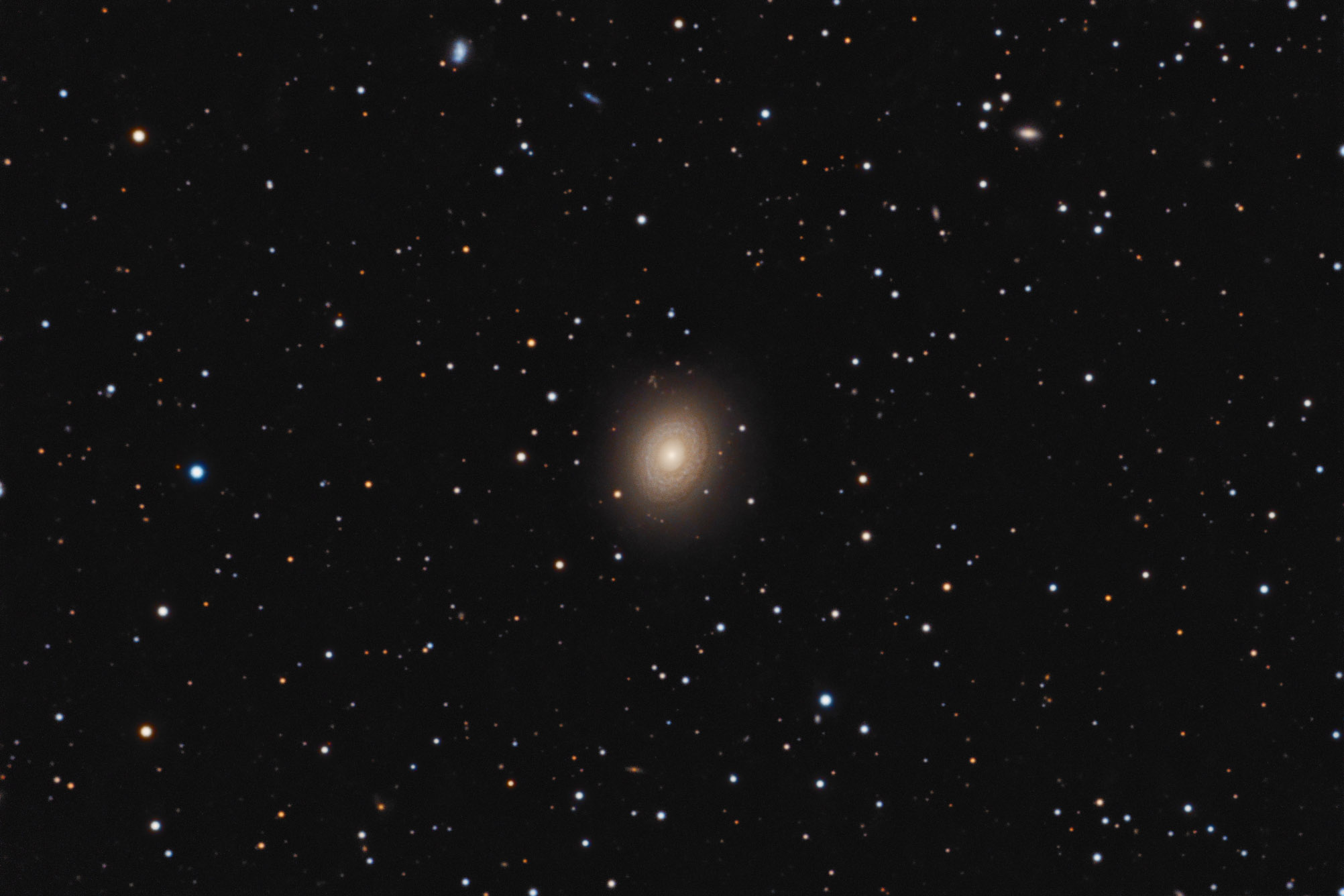