NGC 2841 is a flocculent galaxy in Ursa Major that reminds me of M63 with its tufts of star clouds rather than defined arms. The distance to this one is rather vague. I\'ve seen estimates from 45 to 80 million light years. Redshift and Cepheid measurements favor the shorter estimate while Tulley-Fisher measurements and a type 1a supernova estimate put it further away. Considering large earth-based scopes have resolved a few stars in it I\'d favor the shorter estimates. Hubble easily resolves it into stars. Though there\'s no published Hubble image, you can see some good examples at the Hubble Legacy Archive.

NED classes it an SA(r)b:;LINER Sy1 indicating it has a very active nucleus. The NGC project takes the simple route with Sb I as its classification. It was discovered by William Herschel on March 9, 1788. It is in the original H400 program. My entry from April 15, 1985 with my 10\" f/5 on a humid night limiting how faint I could see using up to 100x reads; \"Large, bright, apparently nearly face on spiral galaxy only slightly elongated but does stretch over to a nearby field star. A starlike nucleus with a beautiful halo about it.\" I\'m confused. My description would imply it is rather round rather than elongated but I was seeing it at least to the star near the northwest end of the galaxy as that has to be the one I mention. That would imply I did see it elongated. Makes me wish I could go back in time and ask myself what I was thinking when I wrote this.

While the Arp Atlas of Peculiar Galaxies has been my main target of late I\'m also working on the objects in the Astronomical League\'s Herschel 400 list from the early 80\'s. This was one of the nicer ones on that list. One that deserves more attention than most astrophotographers give it.

The eastern (left) side appears to be the side closest to us. The flocculent nature of the west side is somewhat hidden by what appears to be a gauze of halo stars. Though after a pass through the high pass filter this difference was greatly reduced.

There are a lot of background galaxies so I prepared an annotated version. One object is considered a quasar in some catalogs and a just a galaxy with a strong AGN by another. Looking at the PSF in my image it is that of an extended object rather than a point source so it appears I\'m picking up some of the galaxy the quasar is in. Not all that common but considering it is only about 2.44 billion light-years distant not surprising. It is labeled as Q/G in the annotated image since more catalogs say quasar than galaxy.

The brightest background galaxy in the image is CGCG 265-009. I found no attempt to classify this odd blue galaxy. It looks like a two-armed barred spiral with lots of disconnected star clouds in the disk unrelated to the arms. It would seem to fit somewhere in Arp\'s Atlas of peculiar galaxies.

The Sloan image of NGC 2841 is at:
http://astronomerica.awardspace.com/SDSS-19/NGC2841.php
It doesn\'t show the flocculent nature very well, probably because of its heavy weighting toward IR light. The dark line is the gap between the CCDs that make up its imaging array. 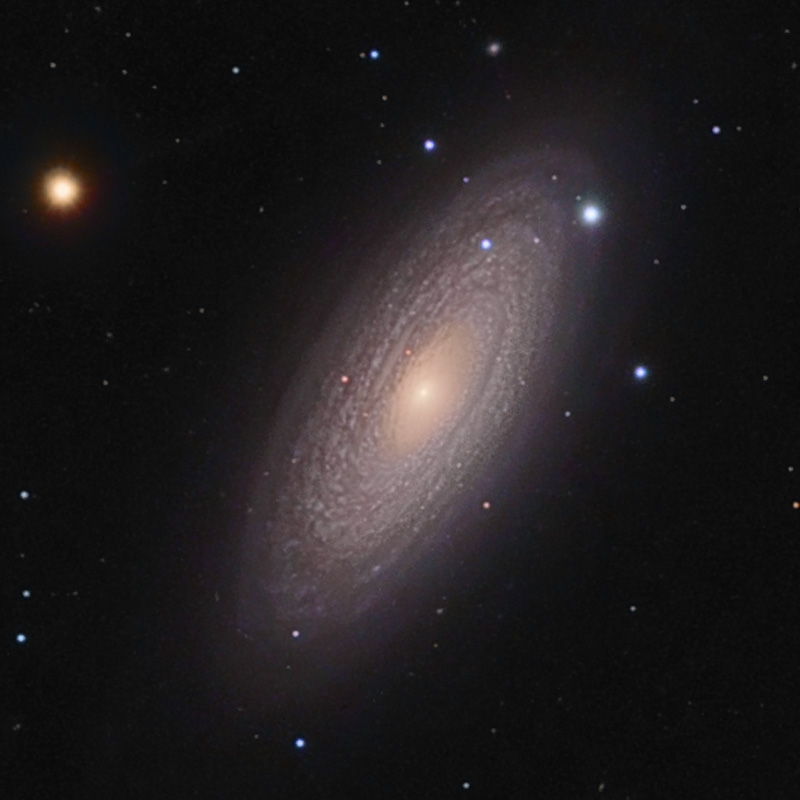 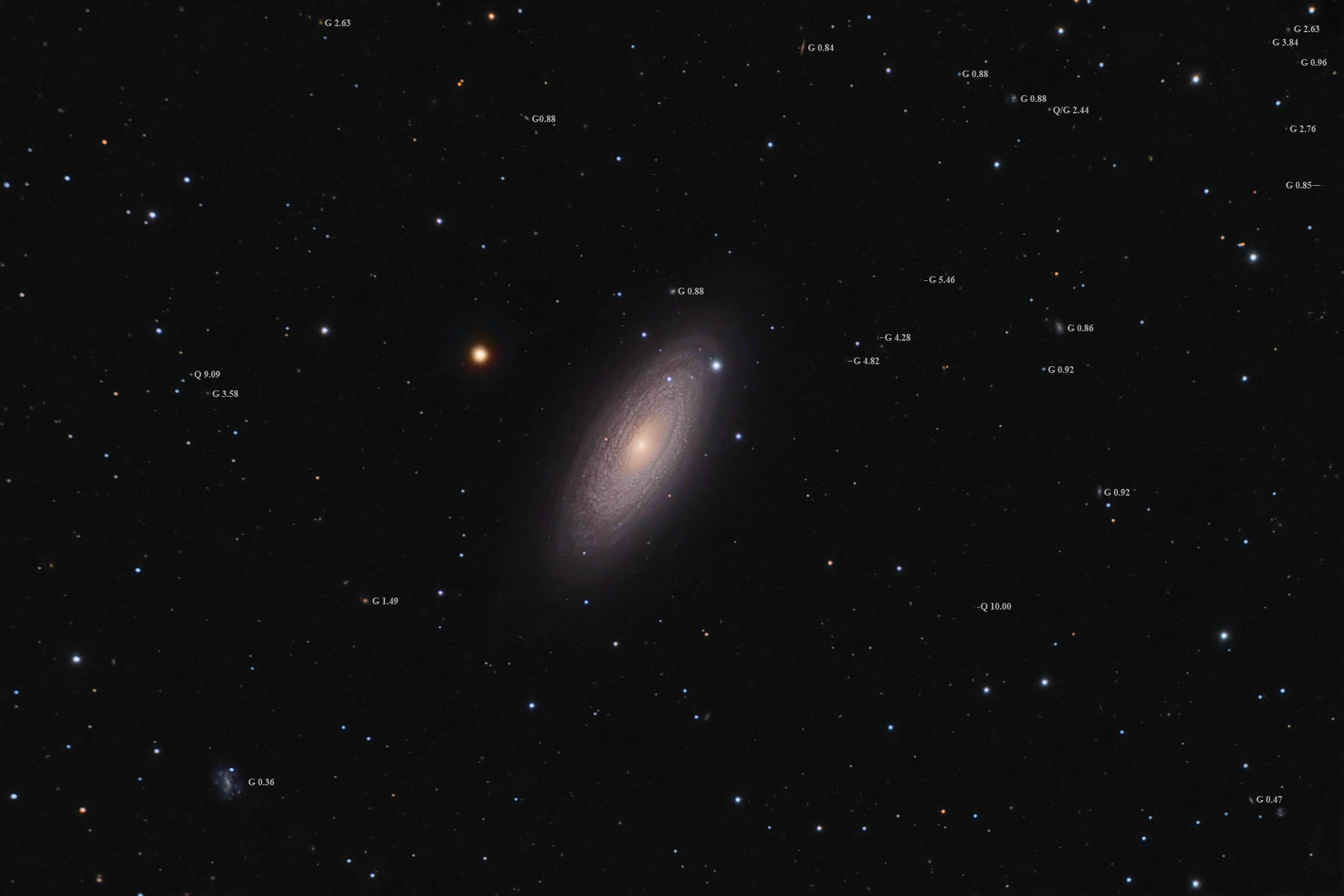 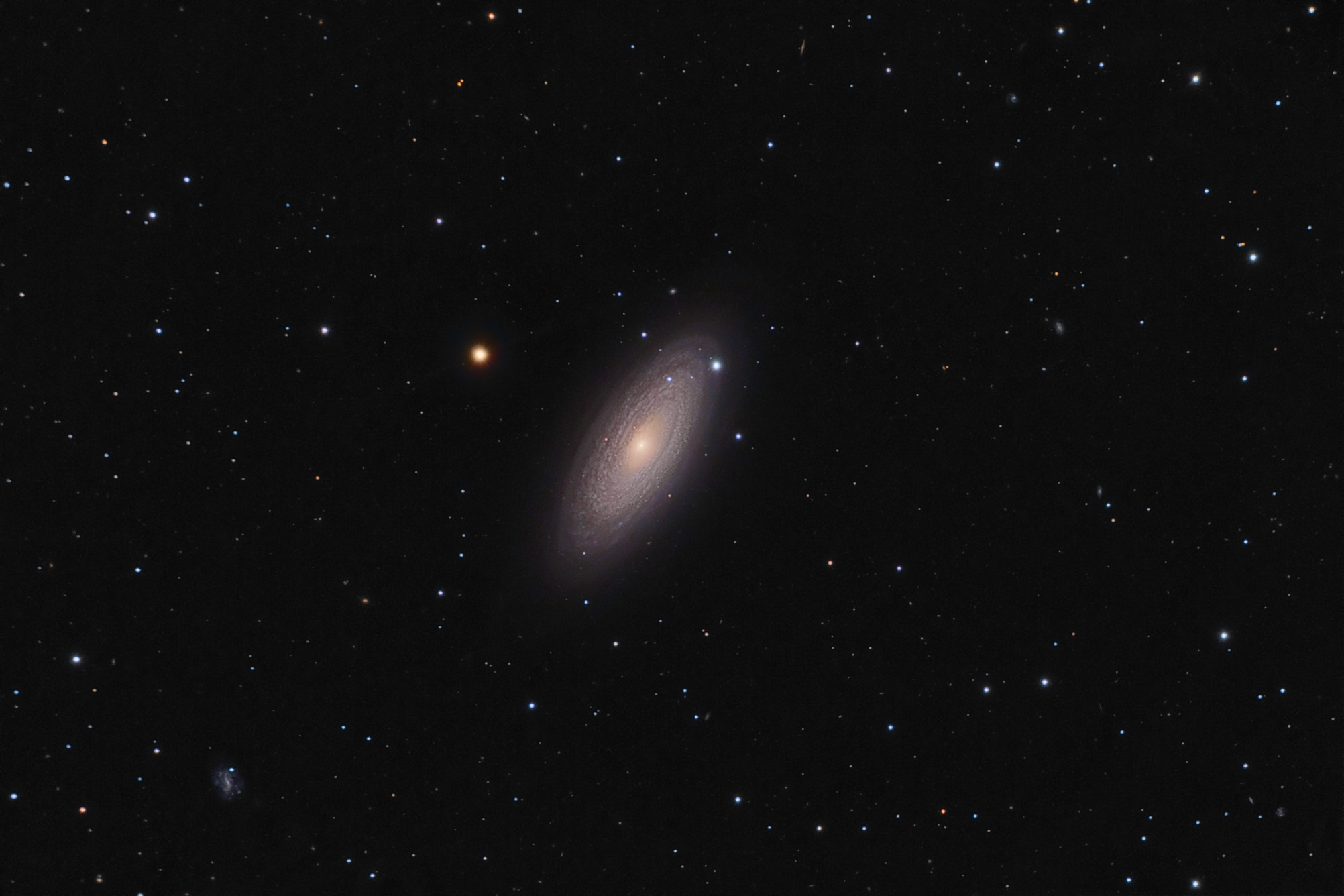