The three NGC galaxies were all discovered by William Herschel but not on the same night. He tended to leave the scope at a set declination and pick up what the earth\'s rotation brought into view. Thus he found NGC 2929 and 2230 on November 30, 1834 but didn\'t sweep up NGC 2231 further north until nearly a month later on December 23, 1834. All are too faint for either H400 list.

NGC 2929 is listed at NED as having a companion on its long drawn out arm that I\'ve marked on the annotated image. It looks like just another knot in the arm to me. I rather doubt it is a real separate galaxy. I\'ve noted it in the annotated image. The odd drawn out arm would fit several of Arp\'s categories, especially that for spiral galaxies with a heavy arm. NED lists it as S?. I think they mean it is a spiral, they just can\'t say if it is Sa, Sb, Sc or Sd so leave that letter as a question mark. The NGC Project just says S. While it looks rather small that\'s due to its distance of 350 million light-years. It really is some 150,000 light-years across.

NGC 2930 is really messed up but has some hint of spiral structure. I\'m surprised it isn\'t listed as Sm. Maybe that is why it too gets a question mark at both NED and the NGC Project. It is some 70,000 light-years in diameter.

NGC 2931 at first glance appears to be a spiral but its arms aren\'t very \"normal\" looking to me. NED didn\'t even try to classify it. However, the NGC Project gives it an S? While it appears larger than 2930 I measure its size as being about the same, 70,000 light years. It\'s just that it is rounder so covers more area but actually is about the same diameter.

All three NGC galaxies were discovered by Heinrich d\'Arrest on February 21, 1863.

The pair of galaxies to the east, CGCG 122-039, appear to be somewhat disorganized spirals as well though I found no one willing to try and classify them. Their redshift puts them slightly further away though I suspect this is more due to their motion in the group than a real distance difference. MCG +04-23-021 is about 65,000 light-years in size while its companion to the east is almost 80,000 light-years across. Its longer drawn out form that makes it appear smaller due to the viewing angle seeing it more edge on.

Since all of them appear disturbed it makes me wonder if they all didn\'t interact in some way in the past resulting in their motley appearance as we see them some 350 million years ago. 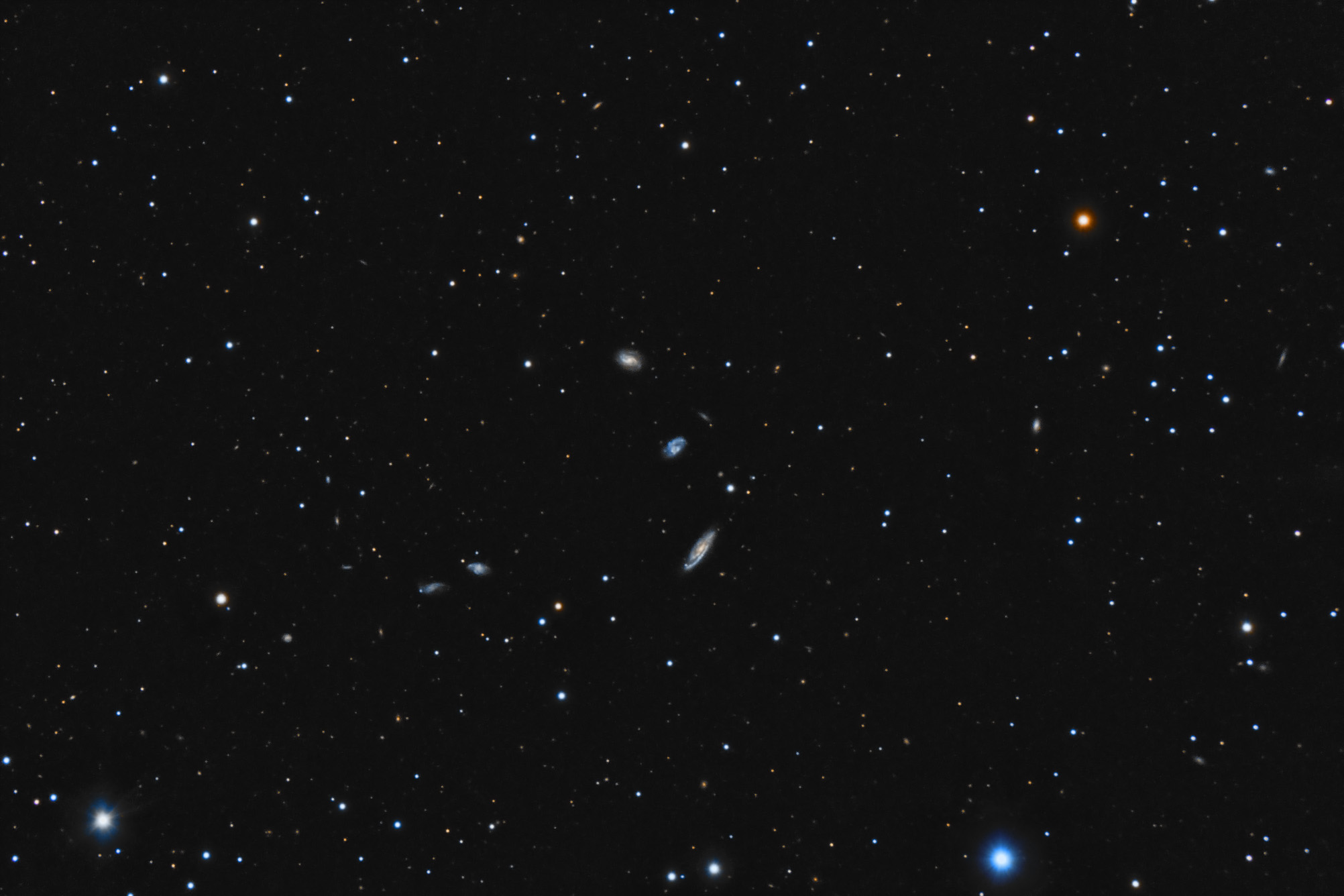 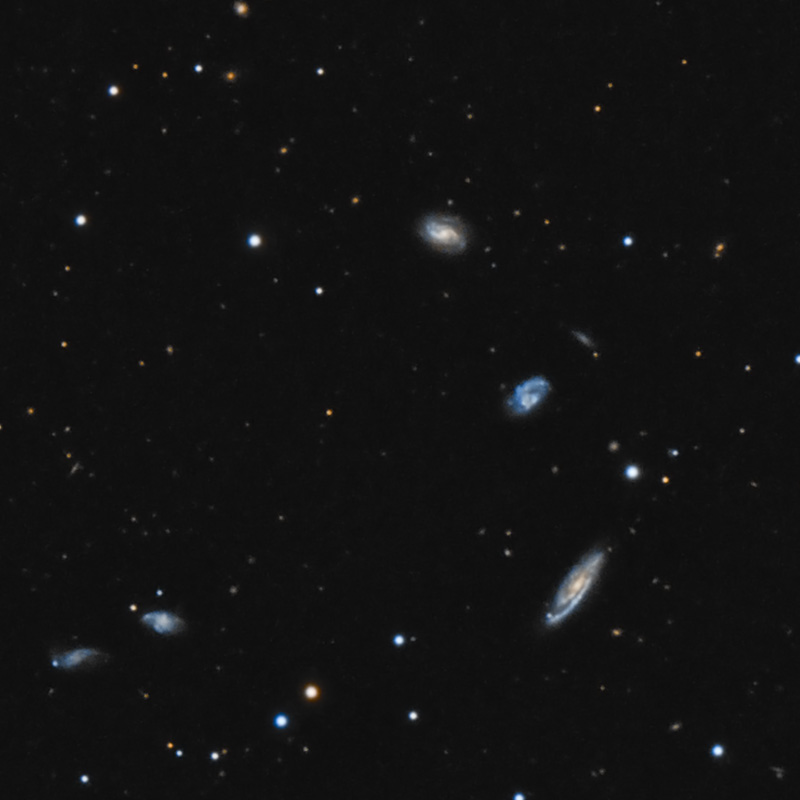 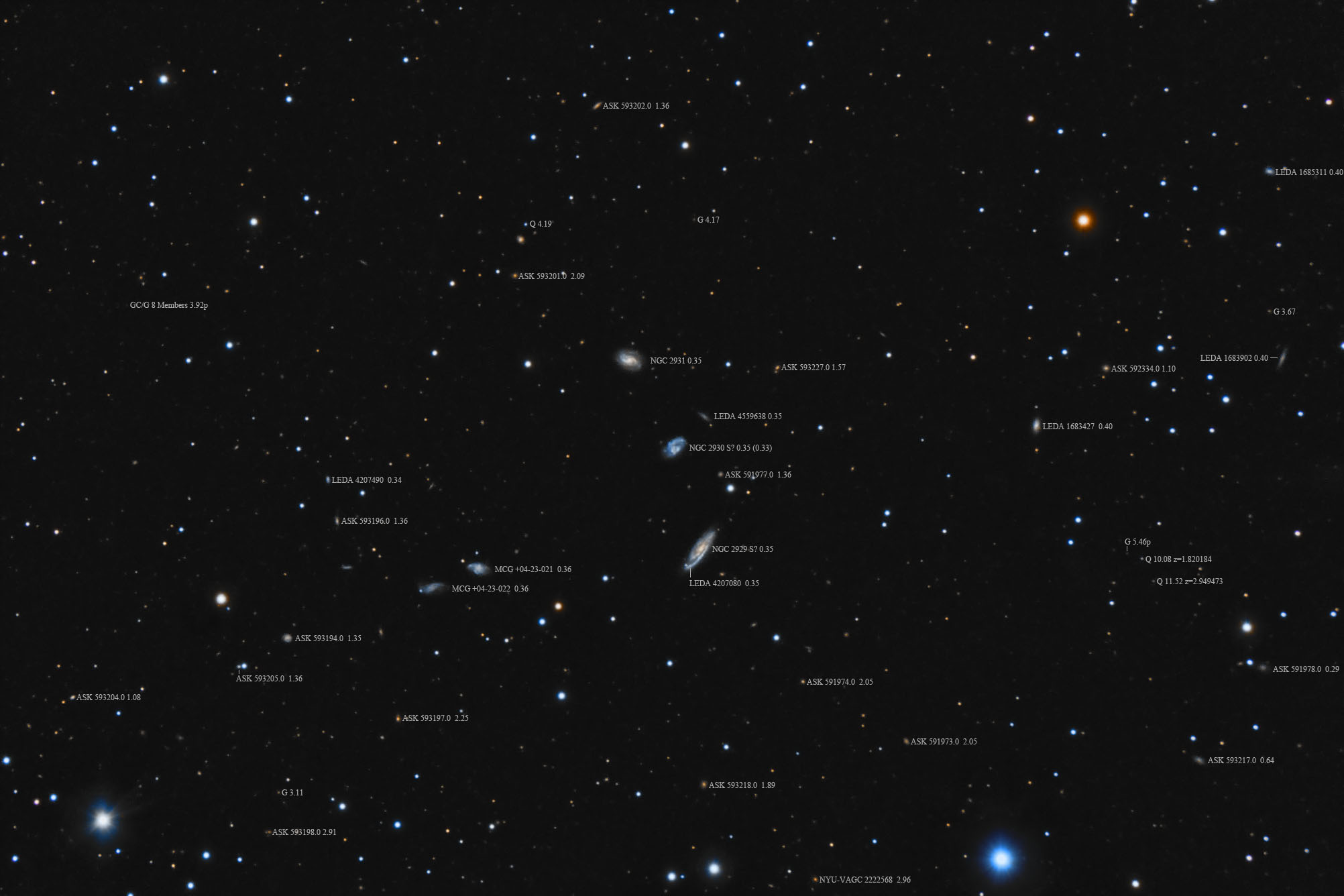