NGC 2943 anchors the WBL 229 galaxy group about 400 million light-years distant in western Leo. While the group is listed at NED as having only 4 members there are many galaxies at about the same redshift as NGC 2943 as shown in the annotated image. The galaxy is a huge elliptical. I can trace it out to about 330 arc seconds on the original FITS stack. At 390 million light-years that is over 600,000 light-years in diameter. It dwarfs more normal sized galaxies in the group and those like NGC 2933 at half that distance. The field contains 4 NGC galaxies at about 400 million light-years, NGC 2934, 2941, 2943 and 2946. With NGC 2933 and its companion LEDA 4207399 at half that distance.

I\'ve noted all galaxies with redshift data in NED. If it is known only by its coordinates I use G for galaxy or Q for quasar rather than a catalog name. One is a quasar candidate noted as QC. One nearby object was listed as both a quasar and galaxy so it carries both labels. A small galaxy group and a galaxy cluster are noted at the location of the anchoring bright cluster galaxy. A \"p\" by the look back time means it is photographic rather than spectroscopic.

Conditions were poor the nights this was taken. I had to combine two nights worth of data to get enough data but ended up with a higher noise level than I normally get with half that number. One night was interrupted by clouds. Both nights had lots of asteroids in the image. In one the trails show the break due to clouds so you can tell which night a particular asteroid was in the frame. The first night had 6 and the second 8 though one of the 8 was very faint and is entirely within NGC 2946 and didn\'t survive processing so isn\'t noted. While I\'ve noted the estimated magnitudes given by the Minor Planet Data Center they seem rather erratic. Some asteroids are very red. My sensor is poor for red which might explain the inconsistency. The second brightest asteroid has the common name of Allilandstrom which is named for Allison (Alli) Landstrom. The naming citation reads: \"Allison Landstrom (b. 1986) was awarded second place in the 2004 Intel International Science and Engineering Fair for her medicine and health project. She attends the Southridge High School, Beaverton, Oregon, U.S.A.\" It was discovered by LINEAR on Nov. 1, 2000. http://neo.jpl.nasa.gov/programs/linear.html

If you are wondering about the double star to the northeast of NGC 2943 that has fuzz around it, so was I. It really is a double star. The fuzz is due to MCG +03-25-012, a background galaxy. Looking at the Sloan image the part to the lower right of the double star looks normal but then above the double star is more fuzz that if part of that galaxy is hard to explain. Something odd may be going on here but without turning off those two stars I can\'t tell what it might be. NED has no distance data on it so I didn\'t include it in the annotation. 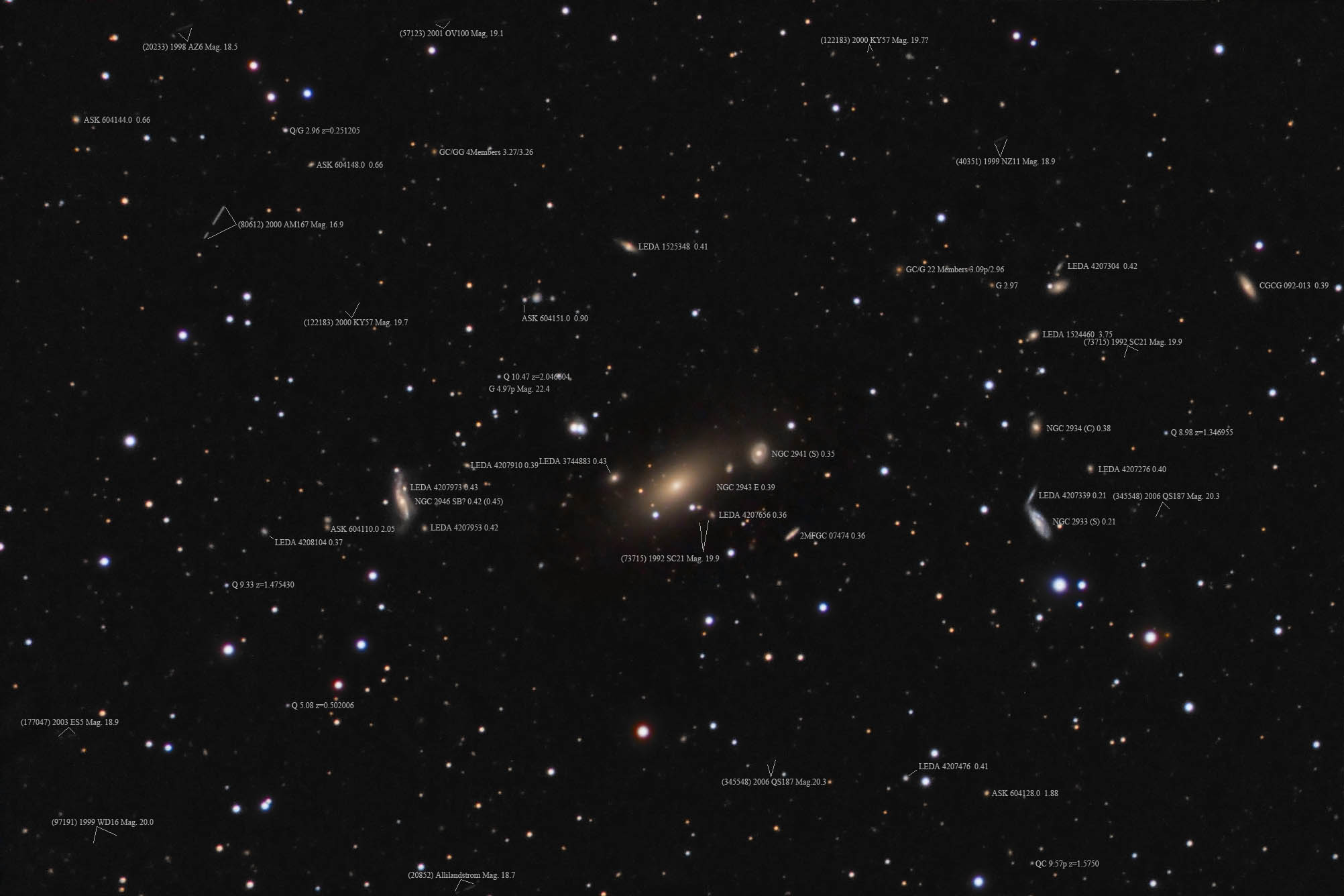