NGC 2950 as a (R)SB(r)0^0 galaxy just below the neck of Ursa Major about 67 million light-years away. I measure its size at about 67,000 light-years 1000 times less than its distance. Others, apparently not seeing its outer halo out as far I do put it at 50,000 light-years across. It is considered a double-barred galaxy. One paper, http://iopscience.iop.org/article/10.1086/381080/pdf indicates the bars have a different pattern speeds. It was discovered by William Herschel on March 19, 1790.

It is in the original H400 program. Being rather blah its being in the program was the only reason it went on my to-do list. My notes from April 15, 1985 on a humid night while celebrating the end of tax season using my 10\" f/5 at up to 150 power reads: \"Very small, faint, round galaxy. It seems to have a starlike nucleus surrounded by a bright ring located half way to the edge of its halo. Interesting but hard to see due to its small size and need for averted vision.\" I suspect that the humidity was worse than I realized that night. Apparently, I was only seeing the inner parts of it. I never looked at it again until taking this image and then I only looked at it with the camera.

I found only a very few color images of this galaxy and no two were similar in color. Even two Sloan images varied quite a bit. Otherwise, I found few images of this one and not even one at Astrobin where many imagers post their pictures (not me). Considering it\'s dual bars aren\'t seen except in IR light and it\'s rather blah otherwise the lack of images doesn\'t surprise me.

It is listed at NED as being part of the NGC 2950 group, a group of 4 galaxies. NED doesn\'t say what the other three are. I assume PGC 027788 at almost the same redshift is one of the three. The others must be outside my image. I didn\'t go looking for them. Some quasars are classed as HiBAL. This stands for High ionization Broad Absorption Line. There are also LoBAL quasars with Low ionization. Also just BAL. Though only those classed as HiBAL quasars were in this image. I suspect most of the Candidate Quasars will turn out to actually be quasars but I left their designation as a candidate to be conservative. If quasars, there\'s a surprising number of them in the image. Arp held on to his belief quasars weren\'t distant objects but were ejected from active galaxies. Their redshift was due to something other than the expansion of the universe. NGC 2950 doesn\'t appear to be very active, though the double bar may indicate a merger long ago. I wish I could ask Arp how this one fits with his ideas.

Due to dawn fast approaching I took only 1 green frame saving it for last. I don\'t think that hurt the color at all. If it were a more interesting galaxy I\'d put it on the reshoot list but for now, I have more to take than I have half a chance to ever catch. There\'s a whole universe of things out there to the image! With only 1600 or so taken, I have a long way to go. 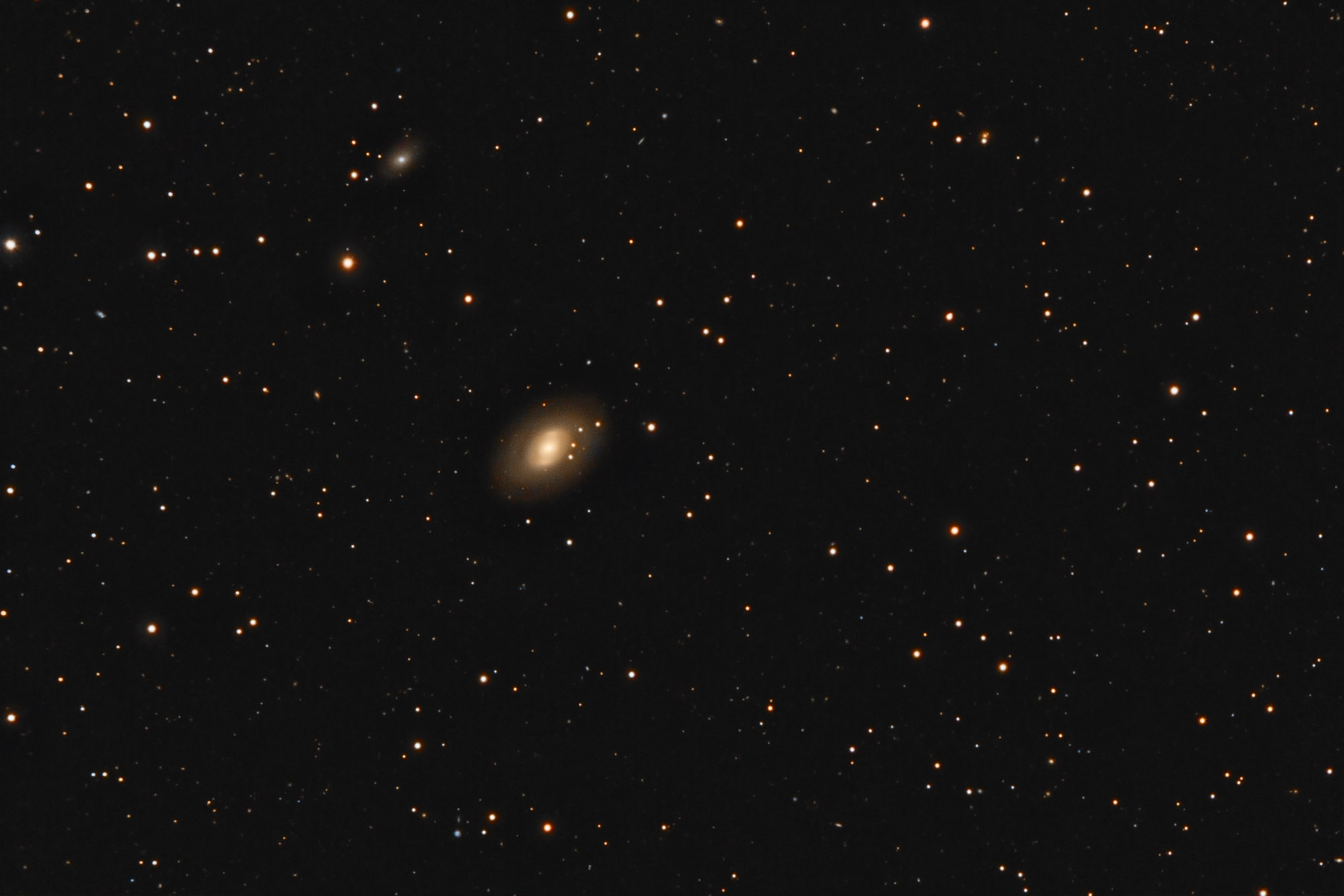 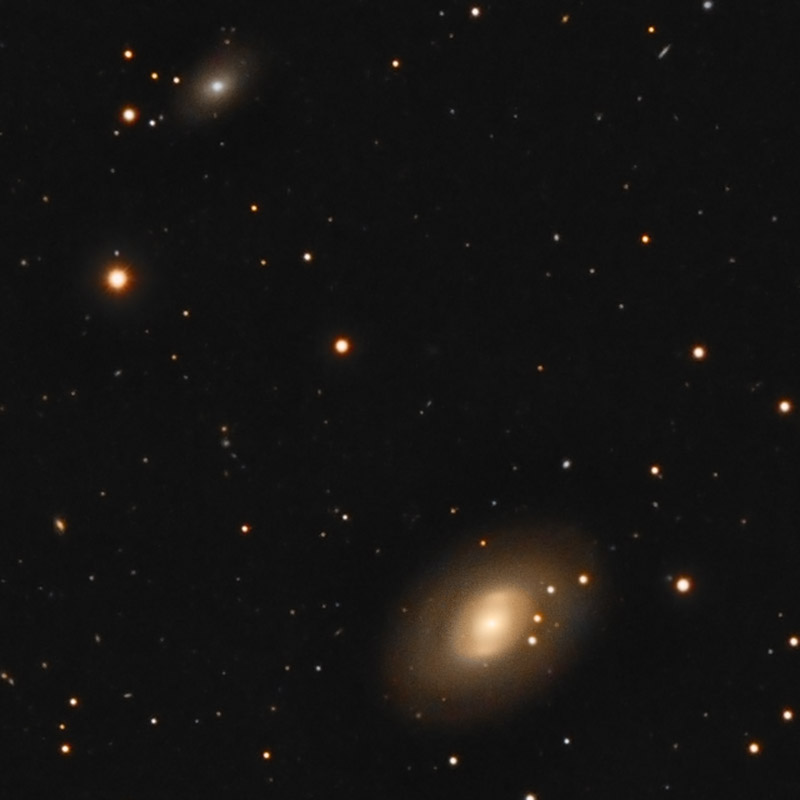 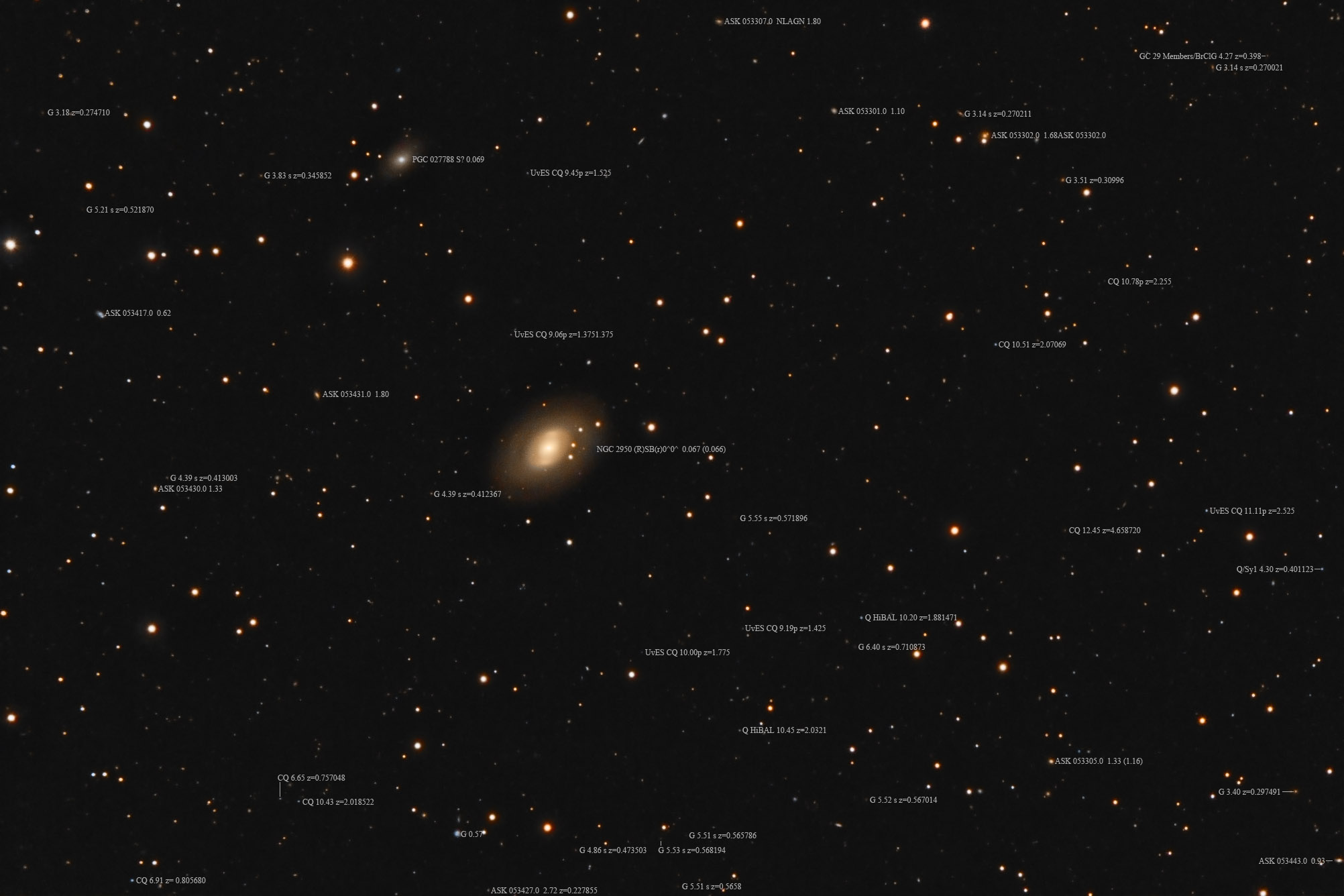