This group of three NGC galaxies is sometimes known as the NGC 2964 galaxy group. Why it is named for one on the end rather the middle one I don\'t know other than it is the brightest of the three. It\'s about as far from the more famous Leo Triplet as you can get being located in the northwestern corner above Leo\'s head.

NGC 2968, in the middle, is a very strange galaxy. Redshift puts it about 84 million light-years distant. Tully Fisher estimates are all over the board ranging from 22 to 84 million light-years. The greatest agreeing with the redshift. It was discovered by William Herschel on December 7, 1785 though isn\'t in either of the Herschel 400 lists for some reason. NED classifies it as I0 which I\'ve not heard of before. Probably the irregular equivalent of an S0 galaxy. The NGC Project just says irregular. It is strange with a bright core with a very weird dust lane that snakes all over the map and an outer faint region. It has two NGC companions NGC 2970 and NGC 2964. Some papers consider it not interacting with either. Some say it is interacting with one or the other. One cites the obvious plume to the north as proving it is interacting with NGC 2970 since it blew a supernova in the plume in 1970. How that proves it I don\'t know. To me, the strange shape and its odd dust lane and plume seem possibly due to a merger with the plume showing the path of the digested companion. The dust lane may have come mostly if not entirely from the digested hapless galaxy. Neither of the companions seem the least bit disturbed which, well, disturbs me. If it were interacting with either I\'d expect one or both to show some sign of it. I found no papers considering this possibility, however. There is an SDSS galaxy seen against or through the disk of NGC 2968. If it were interacting with either I\'d expect one or both to show some sign of it. I found no distance data on it. Is it far beyond as it appears or somehow connected to NGC 2968. Again, I found nothing here. I lean toward it just being in the same line of sight and in the far distance. The diameter of NGC 2968 is about 84,000 light-years ignoring the plume. The plume is a minimum of 142,000 light-years long making the galaxy 226,000 light-years plume to end.

NGC 2964, below NGC 2968, is a Herschel 400 object (original list) being discovered by William Herschel on the same night as NGC 2968. That\'s the reason I had this area on my to-do list. But one look at the focus frame convinced me to center on NGC 2968 instead as even in the 10 second frame to check centering I saw the plume beyond NGC 2970 showing faintly. I didn\'t know what it was until I did a quick internet check. NGC 2964 is classed as a barred spiral by NED but as an ordinary Sbc spiral by the NGC project. I think from the way the arms come off a ways from the core I see a faint hint of a bar leading to their beginning points. It too seems to have an inner bright region, spiral in this case and a fainter ill-defined disk beyond. My notes on it from April 15, 1985 reads: \"Faint triangular puff of a galaxy gradually brighter toward the middle. Forms a nice high power pair with NGC 2968.\" So I saw no detail in it and can\'t explain the triangular shape I saw. I have another mystery. I was a practicing tax CPA in 1985 so how the heck did I have time to go observing on the night of April 15! I never remember being free as I was usually frantically sending in extensions for clients who failed to get me the needed data for their returns. Amazing I got out that night. The time was 9:28 p.m. NGC 2964 is about 67,000 light-years in diameter assuming its redshift distance.

NGC 2970 is the other galaxy sometimes considered as interacting with NGC 2968 and causing its plume. As mentioned that is possible but I prefer a merger as the plume reminds me of a similarly shaped plume involving the known merger galaxy Arp 189, the Umbrella Galaxy http://www.spacebanter.com/attachment.php?attachmentid=4330&stc=1. NGC 2970 was discovered by John Herschel on March 6, 1828. Its distance both by redshift and Tully Fisher measurements is 87 million light-years. It is classed as E1 by NED and the NGC Project. It is also known as MRK 0405. Markarian galaxies are usually much bluer. This one is virtually white so bluer than most elliptical galaxies, just not as blue as most Markarian galaxies. To me, it shows no sign of interacting with any other galaxy. It is only 25,000 light-years across at its redshift distance. Nearby is ASK 490208 at a redshift distance of 77 million light-years. If right the two aren\'t really related.

To the west of NGC 2968 is ASK 491577.0 and about 2 billion light-years. It seems quite distorted. Just above it is a near starlike galaxy with no redshift data. Are they interacting? Wish I knew.

Below NGC 2964 as the galaxy ASK 491578 classed as a dwarf E6 galaxy about 310 million light-years distant. That would make it some 46,600 light-years across. To me, that\'s rather big to be considered a dwarf galaxy.

In the northwest corner is the very blue ASK 490234 simply classed as \"Spiral\" by NED. It is so blue even the core appears blue. It also looks a bit warped. Though that could be due to a blue field star superimposed over it creating the illusion of a double core. At 220 million light years it is a rather small galaxy at 33,000 light-years in diameter yet it isn\'t a classified as a dwarf. I\'m confused.

The annotated image lists all galaxies with a redshift value and a couple of interest, to me, that didn\'t. 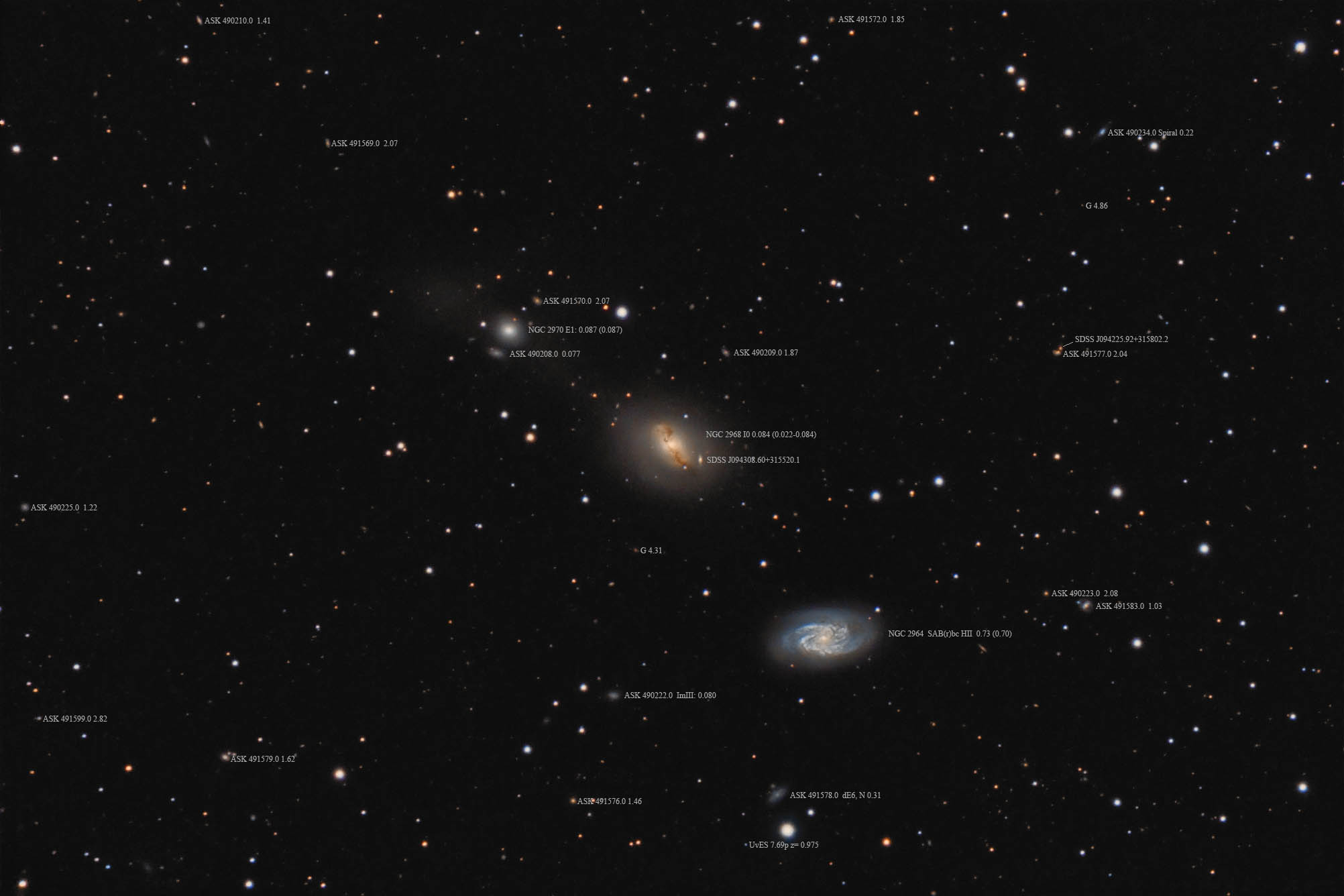 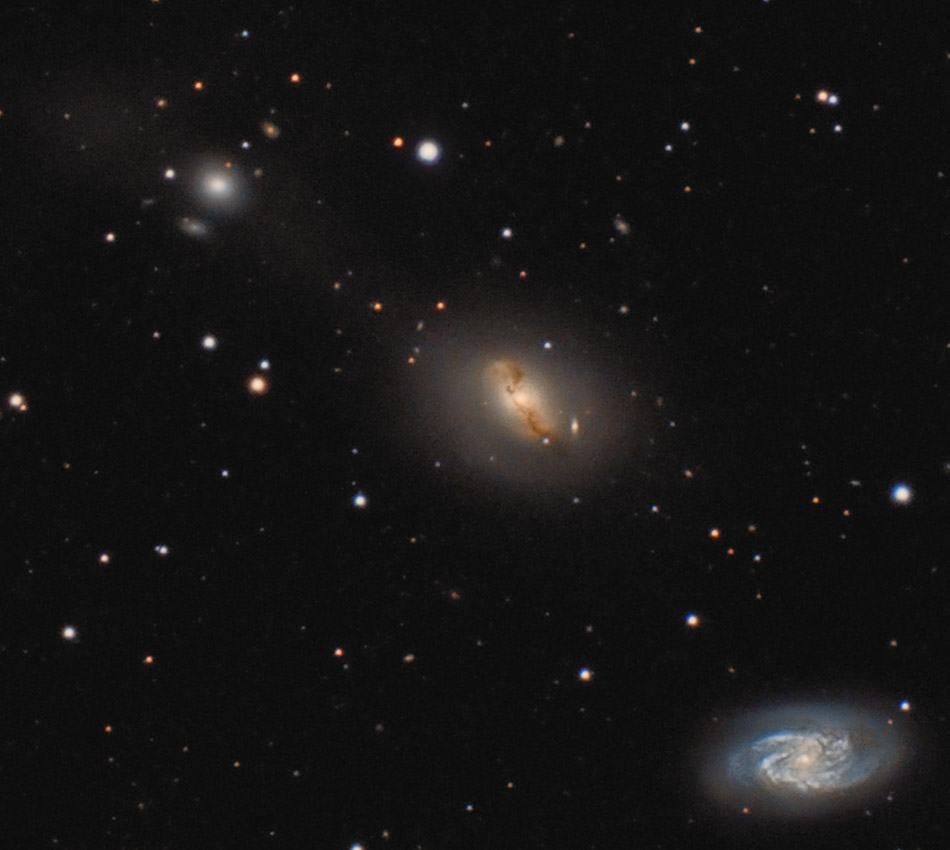 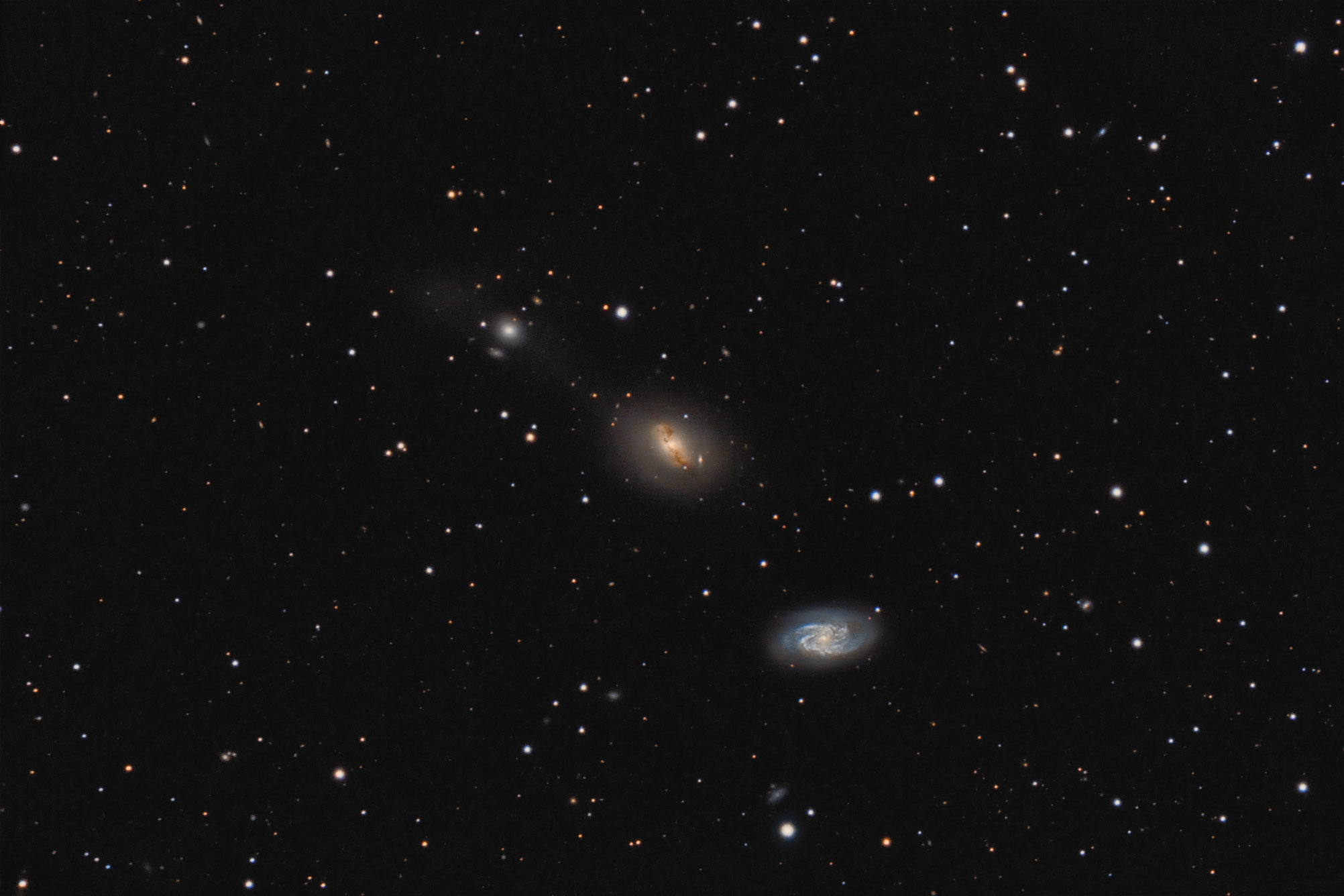