NGC 2976 is a member of the M81 group. This group all seem to have had interactions in the recent past that has caused a period of starburst activity. It is still going on in M82. Many other members have obviously had such a period not long ago. We now see them as very blue galaxies due to all the stars that formed in them. IC 2574 and NGC 4236 are examples of others in this group. NGC 2976 though is smaller than the other two and its spiral structure so disrupted it is hard to tell how to classify it. Most classify it as a peculiar spiral but the classification beyond that is all over the board with no agreement that I can find. Looking through papers on it I find all of the following, SAc peculiar, Sc peculiar, SdIII-IV, S peculiar (they gave up it appears) and a few others that also indicate they really don\'t have a clue. Unlike most spirals, there is no real core to this galaxy. Just an orange spot of older stars marks the core region. No central bulge is seen. It contains many HII regions, over 70 have been cataloged. Seeing wasn\'t good enough for me to resolve this, however. Adding some H-alpha data would help but that isn\'t possible this year.

This image was taken in severe moonlight. Seems it is clear this winter only when the moon is shining brightly off the frozen lake making for horrible conditions. There is a large featureless halo of stars about this galaxy but I can only hint at it through all the moonlight. It is now too far west and in my tree line so I can\'t go back and retry it until next winter. Edit: Years later it still hasn\'t been retaken.

Just to the east (left) of it is GALEX 2485954146456307057. This is a catalog of excess ultraviolet objects cataloged by the GALEX satellite which is currently the main ultraviolet observatory orbiting the earth. (Edit: It has reentered our atmosphere and burned up since I wrote this.) Again, moonlight foiled my attempt to image this guy. It is exceedingly blue and the bright moon makes the sky exceedingly blue at night like the sun does by day. This drowns out faint blue objects. In killing the blue sky from the moonlight I also ended up killing the blue color of this object. It barely showed up in my red data and was faint in green. Very odd for a galaxy. Unfortunately, I couldn\'t find a thing on it other than the listing in the catalog. It too, must be a starburst galaxy to have such an excess of ultraviolet light. It seems to have a faint tidal arm on the side between it and NGC 2976. Though I assume it is a very distant galaxy the lack of information on it makes it impossible to know for certain. I have no redshift data to go by. 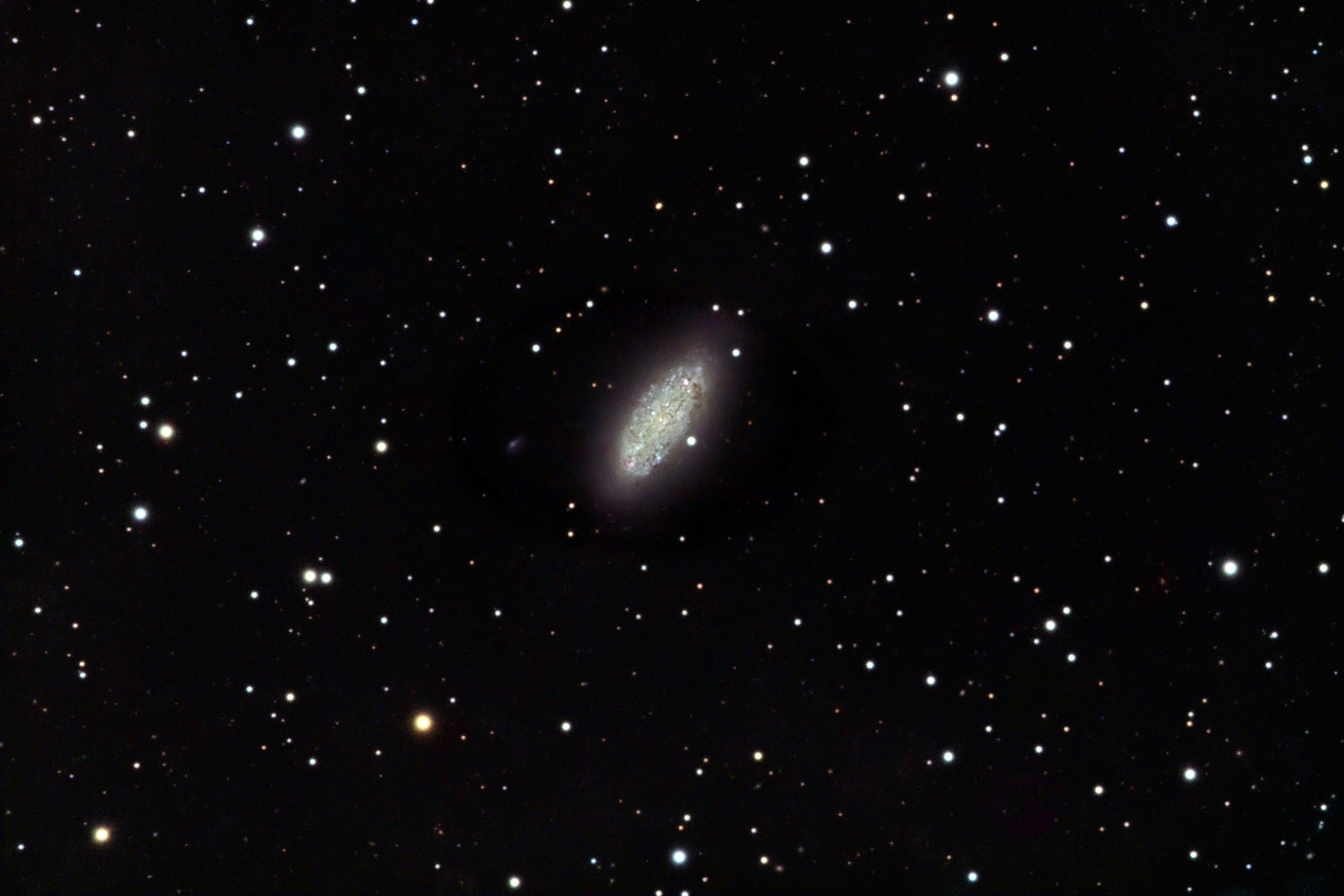