NGC 3079 and NGC 3073 are a pair of galaxies that have interacted in passing. NGC 3079 is the big one in the center. To the right of it and down a bit is NGC 3073. The small blue spiral is CGCG 265-055. The two NGC galaxies are at a distance of 59 and 57 million light years (7073 and 7079 respectively. CGCG 265-055 is 64 million light years and while apparently related isn\'t considered to be interacting from the notes I can find. Odd as its very blue color would indicate massive star formation which can be a sign of interaction. Yet 7073 shows little star formation going on. NGC 7079, however, shows major signs of interaction. Its disk is severely warped. It appears like the core is bouncing up and down (or right to left at my view angle) and has been caught far to the left. I find papers citing NGC 3073 having a young stellar population indicating rapid star formation is going on. Yet I see no sign of it in the photo while CGCG 265-055 shows the obvious signs of such star birth. Yet that isn\'t mentioned in the papers I saw. I\'m confused.

Adding to the confusion most papers call 3079 a LINER galaxy meaning it has an active galactic nucleus (Edit: Now that\'s not considered necessarily true). One paper though says it is so active it should be classed as a type 2 Seyfert yet another says they find too little evidence to even say it has an AGN (Active Galactic Nucleus). Sure would be nice if they agreed better than this.

We\'ll settle for it being a rather pretty edge-on disturbed galaxy and leave it at that. Both were discovered by William Herschel on April 1, 1790. NGC 3079 is in the original H400 program. My entry with my 10\" f/5 on April 15, 1985 with my 10\" f/5 on a very humid night at up to 150x reads; \"Large, long streak of a galaxy. Seems to break into two parts toward the northwest end or is this yet another galaxy? I\'ll have to return to this again on a better night!\" I didn\'t do that. I suppose the dust lane near the top of the galaxy plus the field star likely at the limit of my naked eye visibility on this poor night might have combined to give this effect.

There is a QSO above this galaxy just out of my frame. Arp and others at one time argued this couldn\'t be a coincidence. Even though red shift showed the galaxies to be nearby and the QSOs to be distant this had to be an illusion as there were just too many quasars beside galaxies for there not to be a connection. It\'s now known this is wrong. Seems in studying galaxies astronomers would notice quasars in the same field. But since they weren\'t studying empty space without galaxies it wasn\'t realized how common they really are and nearly any field you pick will have one or two in it. Thus it is to be expected that some will be found near studied galaxies. The number found now near galaxies fits well with the average density of quasars in the sky so this idea of a connection between them has faded away though some still cling to his idea.

This quasar is so interesting it has its own post. See my entry for Twin_Quasar 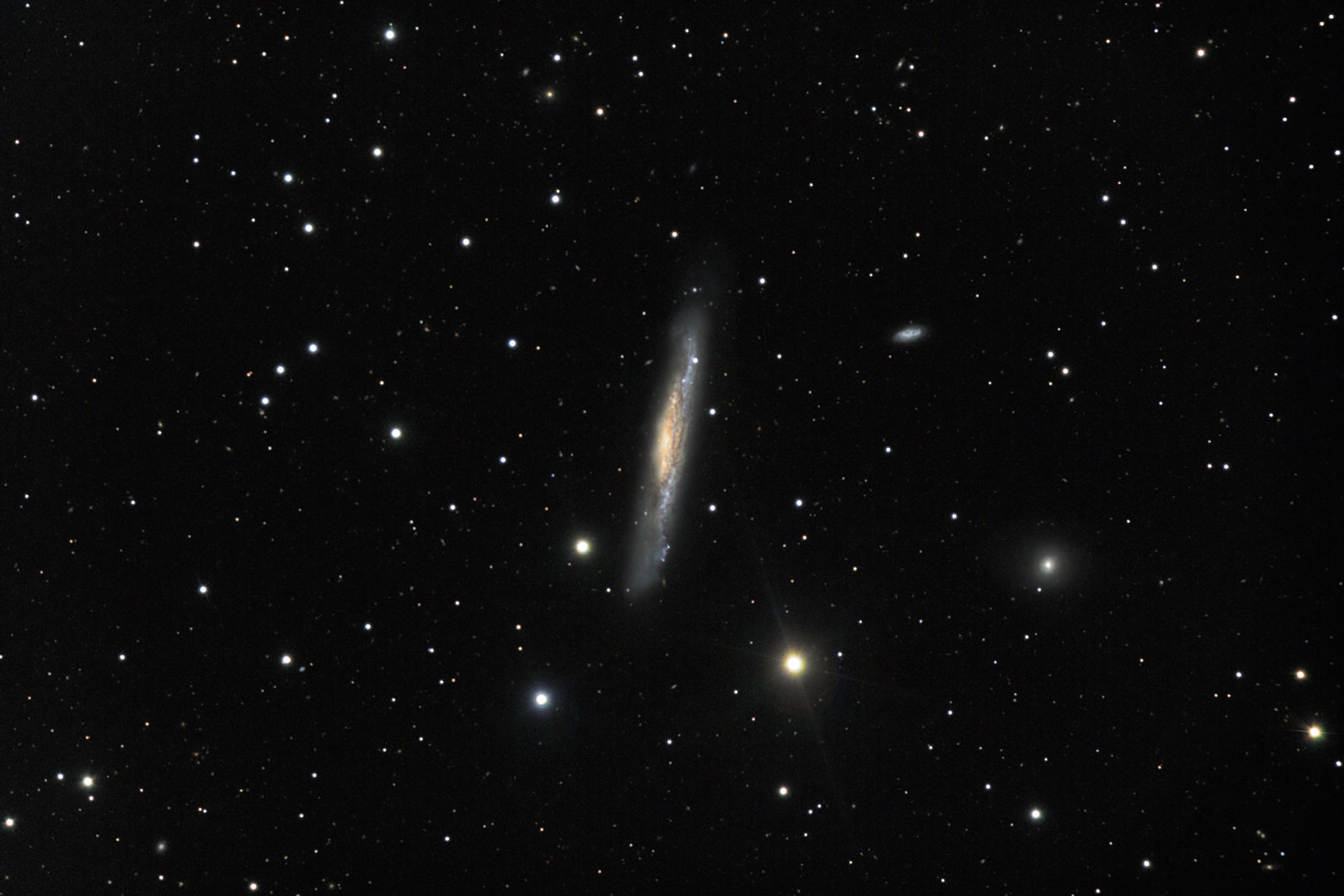