NGC 3115 is one of two galaxies known as the Spindle Galaxy. It is located in Sextans about 10 megaparsecs distant (about 31.6 million light years. Though redshift puts it more distant than that redshift can be rather unreliable this close as random velocities can cause errors of over 10 megaparsecs and much more for galaxy cluster members. The galaxy used to be classed as E7 before the inner disk was discovered. Then it was reclassified as S0-. Some see a slight hook to the disk and say it is S0-/a. This galaxy is low in my skies and was deep in fog rising from the lake which cut both my resolution and limiting magnitude by quite a bit. I was unable to show any hint of the hook structure to the disk nor do I see it on any web images including some by space telescopes.

The galaxy is considered to have a super-supermassive black hole at its core that is about 2 billion solar mass in size. This makes it the closest known galaxy to beat the billion solar mass size for its core. I\'d expect such a super-supermassive black hole (our galaxy\'s black hole is only about 0.2% as big) to be very active but NED\'s classification includes the PAS label which stands for a passive core galaxy. Though lots of X-ray emitting double stars are seen near its core by Chandra. See http://www.nasa.gov/mission_pages/chandra/multimedia/photo-H-11-248.html for more on this. While the X-ray image is blue in the false color composite image at this site I found the core to be slightly blue in my image while the rest of the galaxy is quite red. I don\'t know the source of this but it apparently has some blue stars at the core not found elsewhere. Again this goes a bit against is PAS notation at NED.

The galaxy was found by William Herschel on February 22, 1787. Being big and bright it made the original Herschel 400 list. Reading my log entry from April 15, 1985, I must have been high on something celebrating surviving another tax season and not having to work to midnight on extensions. I say this as my notes say I was seeing an obviously non-existent dust lane. It reads: \"Beautiful! A small version of M-31 complete with dust lane on the western edge. Much detail seen in the spiral arms with averted vision. Oddly the Herschel program says it is round yet it is obviously highly elongated.\" I went on to stop the scope to 4\" and it still was highly elongated rather than round and the night was listed as fair due to high humidity. I was using a 10\" f/5 scope. How I saw spiral arms or a dust lane I can only imagine due to tax season fatigue. Rather than averted vision I must have been using averted imagination. Or was I on the wrong galaxy! I put it to the effects of a nasty tax season.

All sources I found consider UGCA 200 a companion of NGC 3115. They do both have similar redshift. I found only one non-redshift estimate which is less than half the redshift distance. If it is a true companion then it likely lies about the same 10 megaparsecs from us as NGC 3115. Assuming this the irregular Magellanic galaxy is about 17,000 light-years across making it a dwarf galaxy. Most sources call it unusually red for such a galaxy. Its core is slightly red though the outer region is light blue. Overall I\'d call it deficient in blue rather than excessively red though I suppose this is a half full/empty glass issue.

I was surprised to find the galaxy\'s field was not in the Sloan survey\'s field so few of the hundreds of background galaxies had any redshift data. Most that did were fainter than my 20th magnitude limit due to the fog over the lake. Normally I go to about 22.5 and likely would have picked up more of them. Most of the ones lost to fog were from the MDS which stands for Medium Deep Survey which was done by the Hubble Space Telescope. Yet I found no processed images of the galaxy at any HST website.

There\'s one asteroid in the image. Note how its brightness varies along its track. Only one spot does it seem to show the right brightness for a 19th magnitude asteroid moving at its speed. For a bit right after that (it\'s moving up to the right) it almost vanishes entirely due to the fog. This gives some indication how poor conditions were. I took 5 objects this (December 18, the only December night I could open) night. All hurt severely by the fog. This fog is called \"Arctic Smoke\" by locals. Humidity is nearly 100% here in winter. The lake ice is warmer than the land due to the water below seeping up through cracks. This added humidity hits the colder air above the lake and turns to ice fog. As it hits shore trees they are coated with this ice with a white layer of hoar frost. I\'m stuck imaging through this when shooting low in winter. This limits how low I can go in winter. At -7 degrees declination this image is about the limit unless the night is unusually dry. 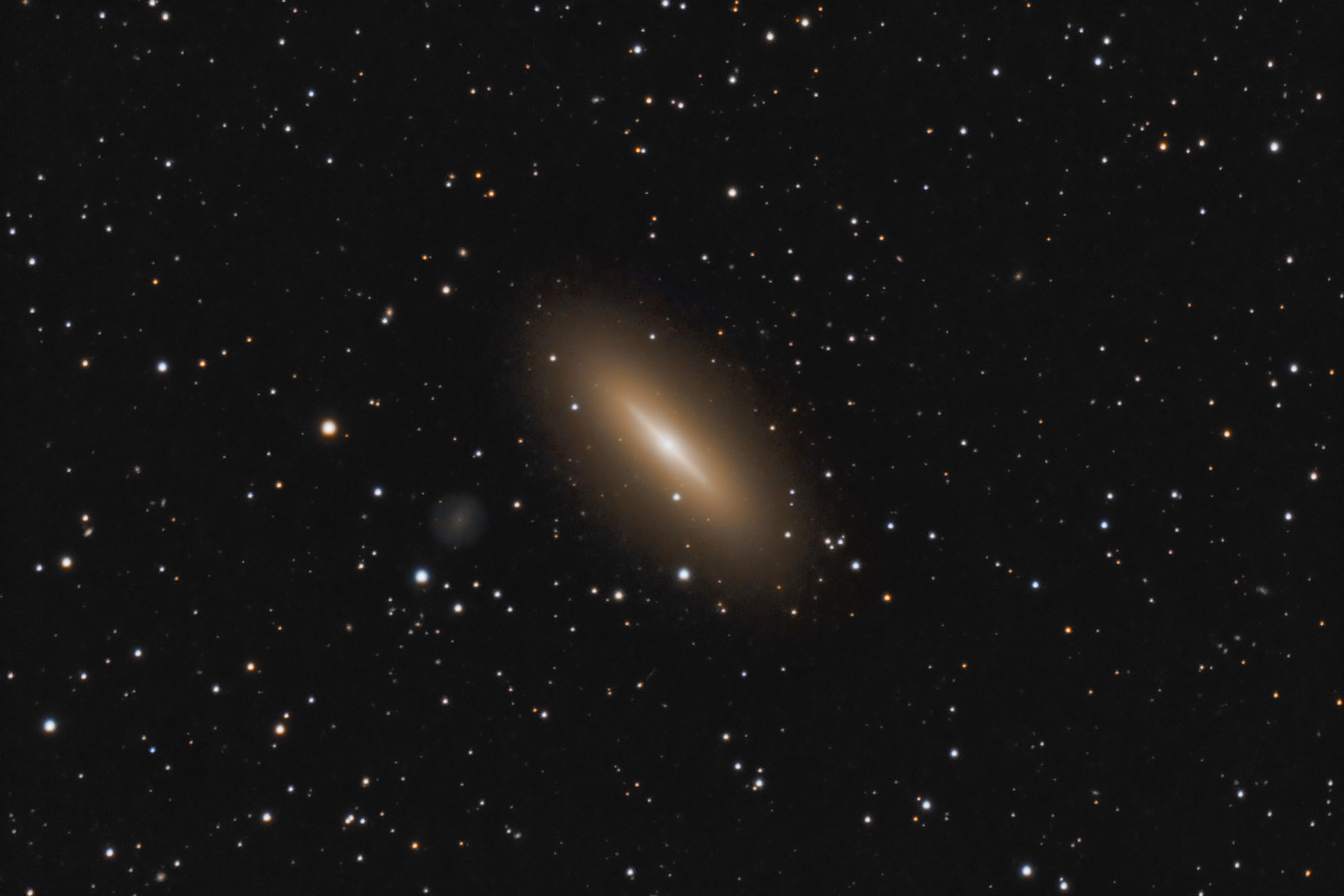 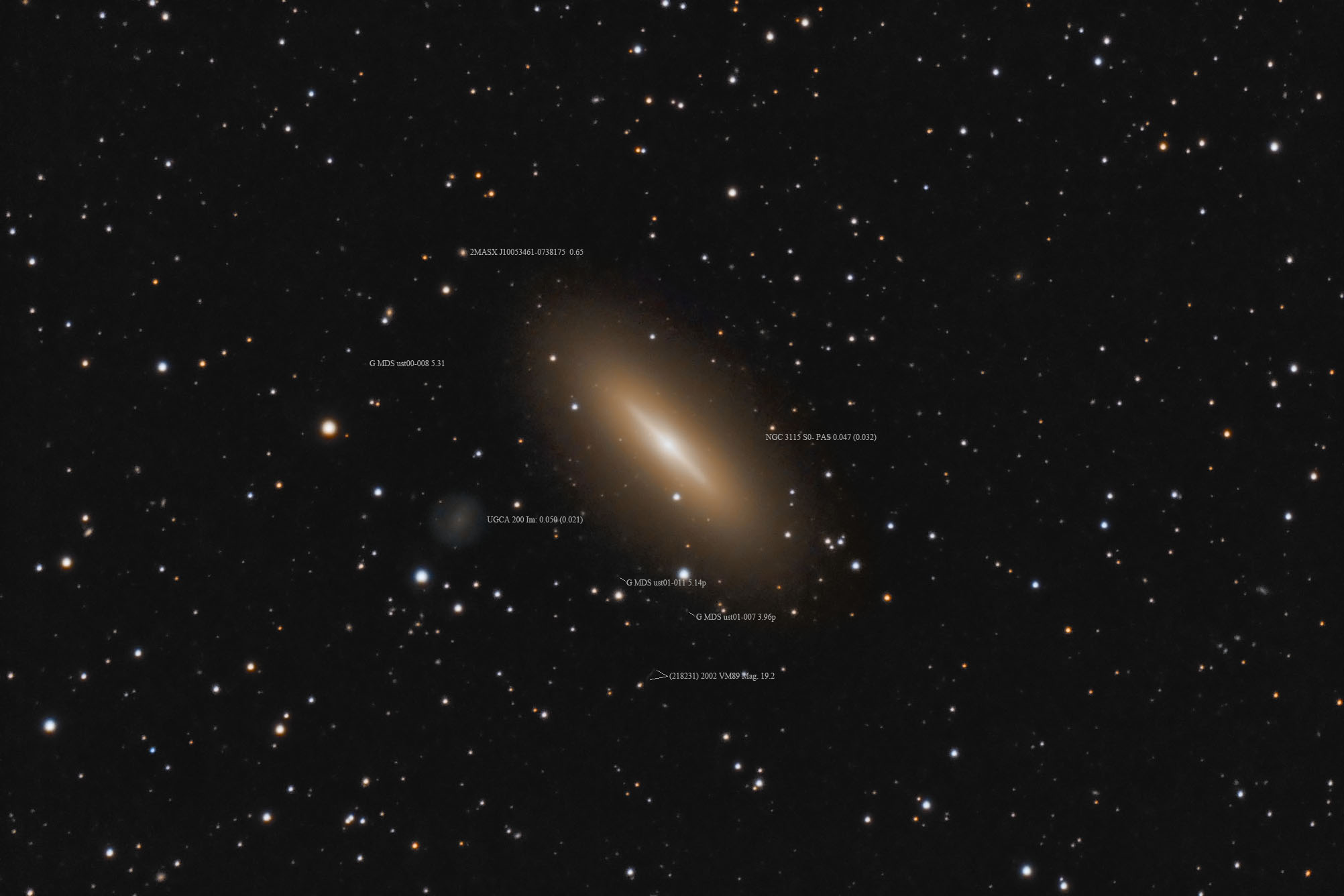