NGC 3206 is a strangely distorted galaxy in Ursa Major just west of the bowl of the dipper. It is quite nearby at about 60 million light-years by redshift and 66 million light-years by the median of 7 Tully-Fisher measurements. Using the latter distance it is a rather average size spiral at 47,000 light-years across its north-south axis. I don\'t find much on it and nothing on how it might have gotten its odd shape. Unusual the shape might be but not enough to garner a peculiar label as most classify it is an SBc or SBcd galaxy. It was discovered by William Herschel on April 8, 1793. It didn\'t make either of the Herschel 400 observing programs, probably due to its low surface brightness.

It has two apparent companions in my frame. NGC3220 at 61 million light-years by redshift is a nearly edge-on spiral with very blue star clouds at the ends of both the east and west ends. While NED and the NGC Project classify it as Sb or Sb: Seligman says Sd? Quite a disagreement unless that is a typo. It looks to my untrained eye as Sb is more likely the case. This one was also discovered by William Herschel the same night as NGC 3206. But then 97 years later on August 8, 1890 Lewis Swift reported it as a new galaxy even though the NGC had been released and his position, as well as Herschel\'s, was right on the galaxy. How Swift didn\'t notice this nor Dreyer when he entered it in the IC as IC 604 I don\'t know. But thanks to this slip it has both an NGC and IC number even though neither discoverer got the position wrong. The blue star clouds at each end make me wonder if it and 3206 didn\'t have a fast close encounter some time back. Like 3206 it isn\'t in either Herschel observing program either. It is much smaller than 3206 at about 21,000 light-years in size as seen from our sideways view.

The third NGC galaxy lies between these two and is NGC 3214. It is an S0/a galaxy and is obviously unrelated as it is some 6 times more distant. So while it appears much smaller than the other two NGC galaxies that is an illusion as it is about 72,000 light-years across. It was discovered by Ralph Copeland, an astronomer on the payroll of Lord Rosse who used the 72\" scope to find this one on March 9, 1874.

It too has a companion at about the same distance (350 million light-years by redshift) that is an Sbc spiral with weakly defined arms that is cataloged as CGCG 290-031. It is some 66,000 light-years across assuming its redshift distance.

A highly distorted galaxy with a faint highly distorted arm or plume lies below NGC 3206. Conditions were poor the night I took this data with very low transparency and a super bright sky thanks to all the ice in the air at an ambient temperature of -36C. Thus the plume or arm doesn\'t begin to show like I\'d expected it to. It is labeled as ASK 210636.0 and it too is at 360 million light-years so could be related to the others. Look around and you\'ll find a couple more at about this redshift distance. All are likely part of a widely separated galaxy group.

Also in the image is a quasar candidate shown as a UvES (Ultraviolet Excess Source) as well as a galaxy that NED considers a quasar at only 1.61 billion light-years. The galaxy shape is quite obvious in my image. Normally I\'d expect a quasar to be so bright the underlying galaxy would be lost in its glare. So I have a problem with the quasar designation and have listed it as G/Q in the lower right or my image. 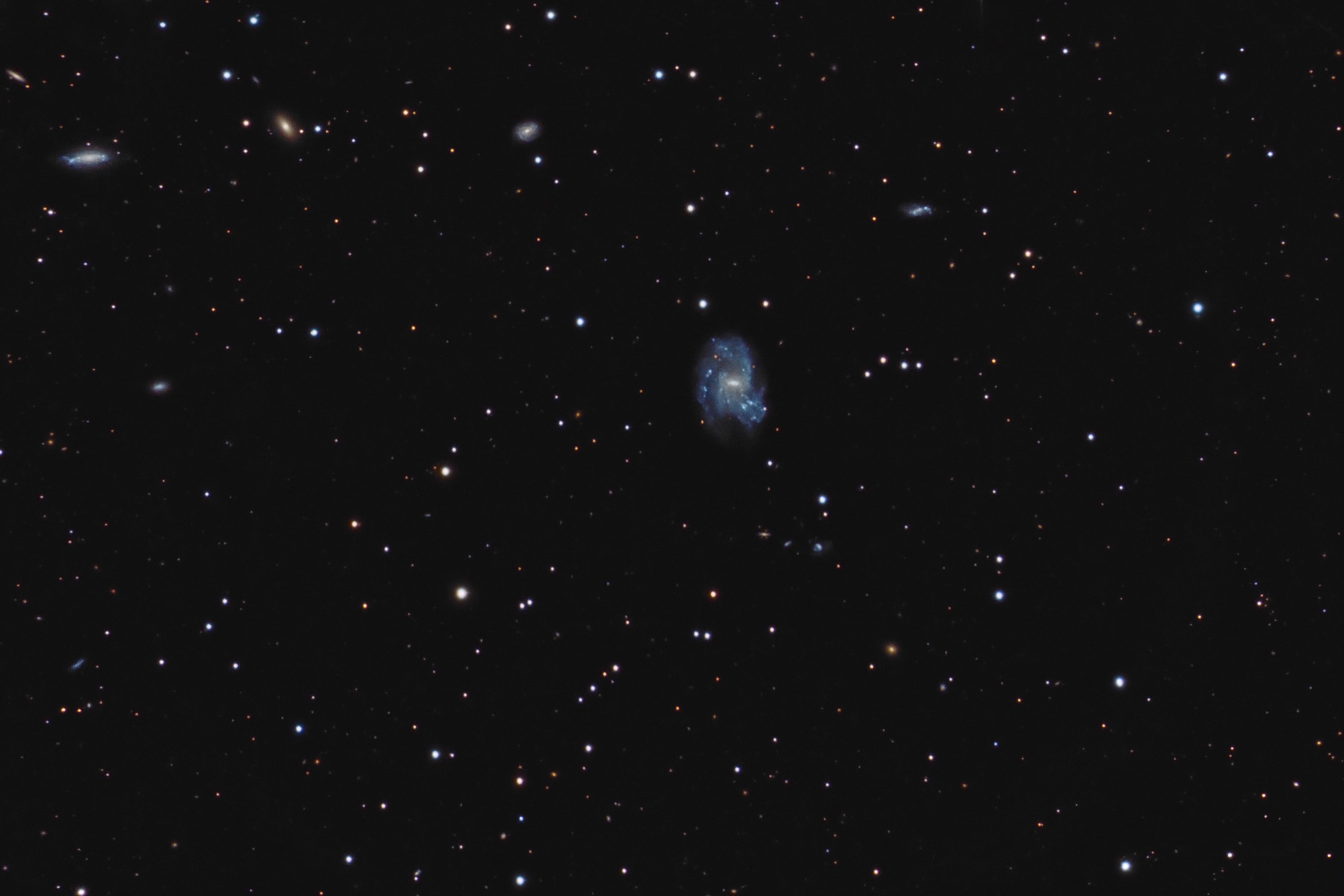 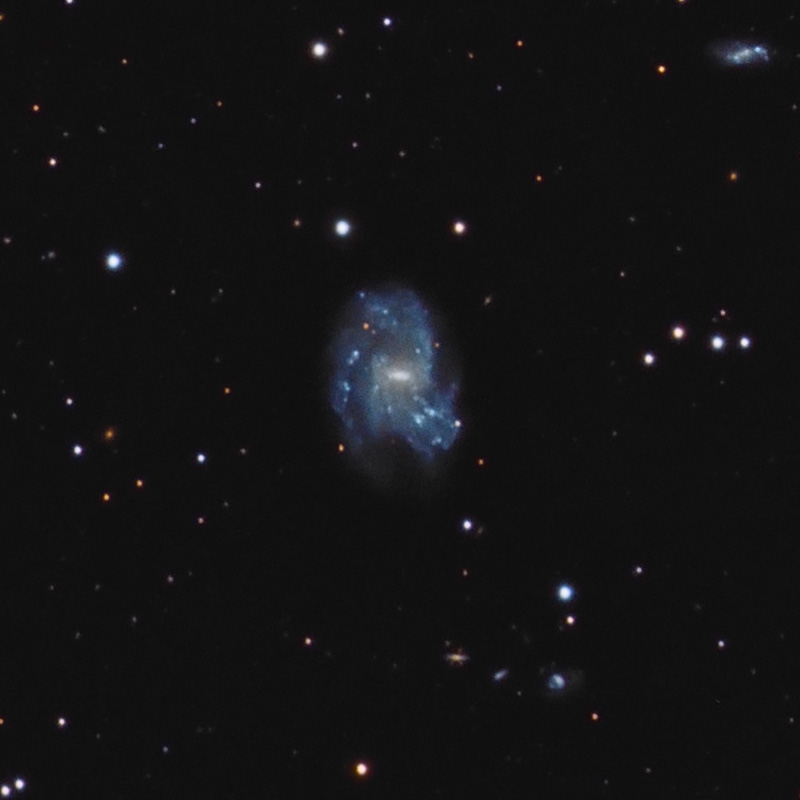 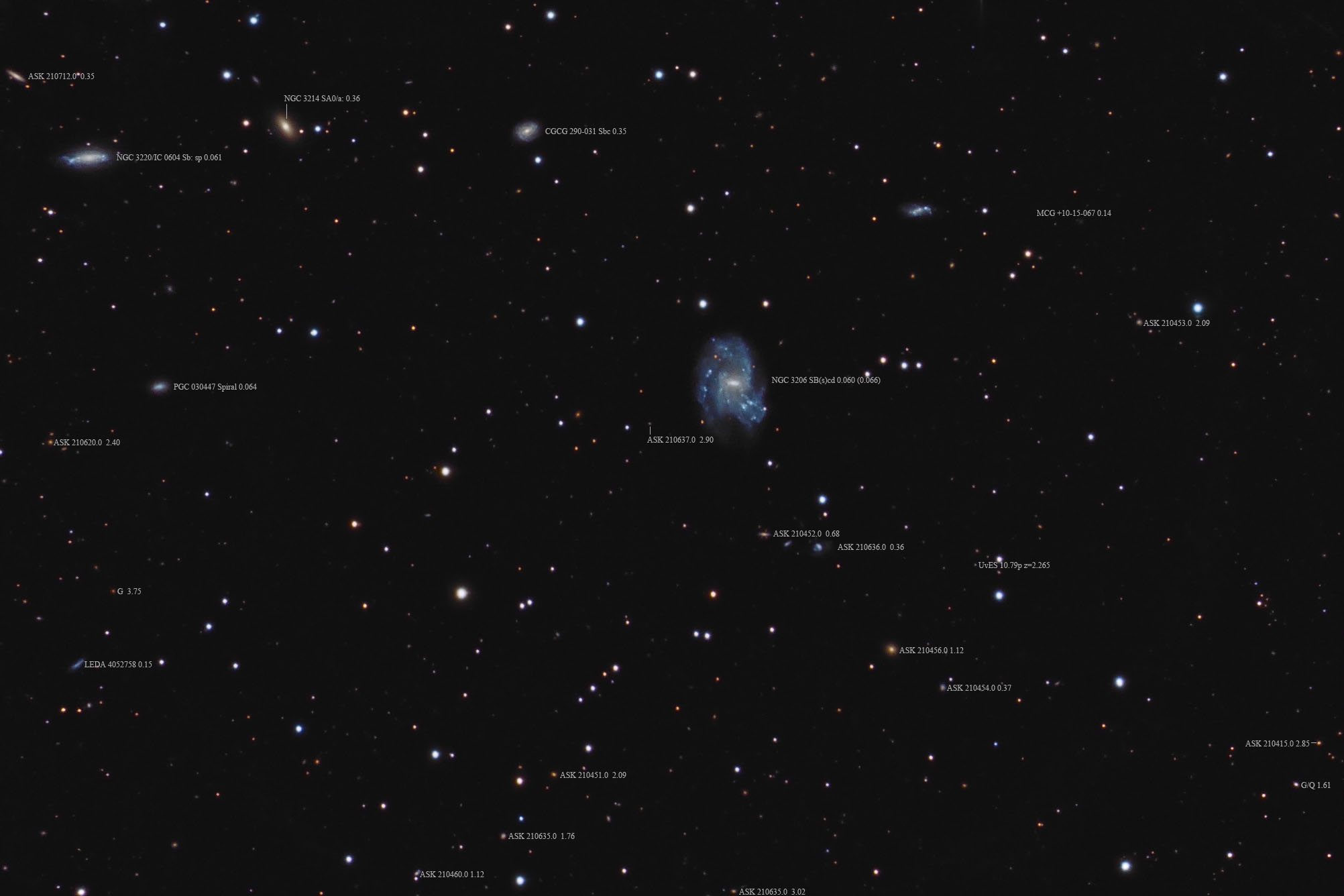