NGC 3254 is a nice spiral galaxy in Leo Minor about 76 million light-years distant by redshift and 94 million by non-redshift measurements. Using the shorter distance I get a size of 112,000 light-years. The greater distance its size is 142,000 light-years. That would make it unusually large so I\'m going to go with the nearer distance and thus smaller size which still makes it larger than our galaxy. Also, like ours, it appears to have only a small bulge at its core. That could indicate a smaller than typical supermassive black hole at its center.

The galaxy was discovered by William Herschel on March 13, 1785. It is in the second H400 observing program, my notes from that somehow got lost in the move up here 13 years ago. I never transcribed them to a computer file as I did the those from the original program. Where\'s a time machine when you need it?

One field galaxy in the image has a rather rare catalog designation KISSB. That stands for Kitt peak national observatory International Spectroscopic Survey Blue spectral region. I assume they left off the final S for spectral region because that would make it KISSBS and they don\'t want to be known for BS. Though Bemidji State University is only about 40 miles north of me and it gives Bachelor of Science degrees so you can get a BS degree from BUS. not only that their team mascot for boys and girls teams makes them the Beavers.

I again ran into what appears to be a mistake in Ned\'s database. There\'s a near point source east of the upper end of NGC 3254 that NED says is a galaxy but it puts the verified spectroscopic redshift at 3.156588. While I can see some quasars at that distance (11.68 billion light-years look back time) there\'s no chance I\'d see a galaxy at that distance, The HST has to look long and hard to see them at that redshift. I\'ve labeled it G? and (Q) for my judgment it really is a quasar and Ned\'s designation as a galaxy is true only because quasars are so bright it dominates and hides most any trace of the galaxy it is in.

Two asteroids were in the far eastern side of the image frame when it was taken. One was bright enough for its color trails to be seen against the background sky glow. I took the two blue and 2 of the 4 luminance frames on the eastern side of the meridian, flipped to the other side and took the rest. Most say to save red to last since it isn\'t hurt by poor seeing as much as the other colors. This is true and I used to do this. But then I realized high resolution of color data isn\'t at all that important but getting the intensity of the colors correct is. This way I balance red and blue at about the same altitude. Green is by far the least important color, I can compensate easily for too little green so now save it to last. I found on difficult nights this helps. This wasn\'t such a night but it is now the order I do things, saving green rather than red for the lowest data taken. That plus eXcalibrator make short work of color balance. 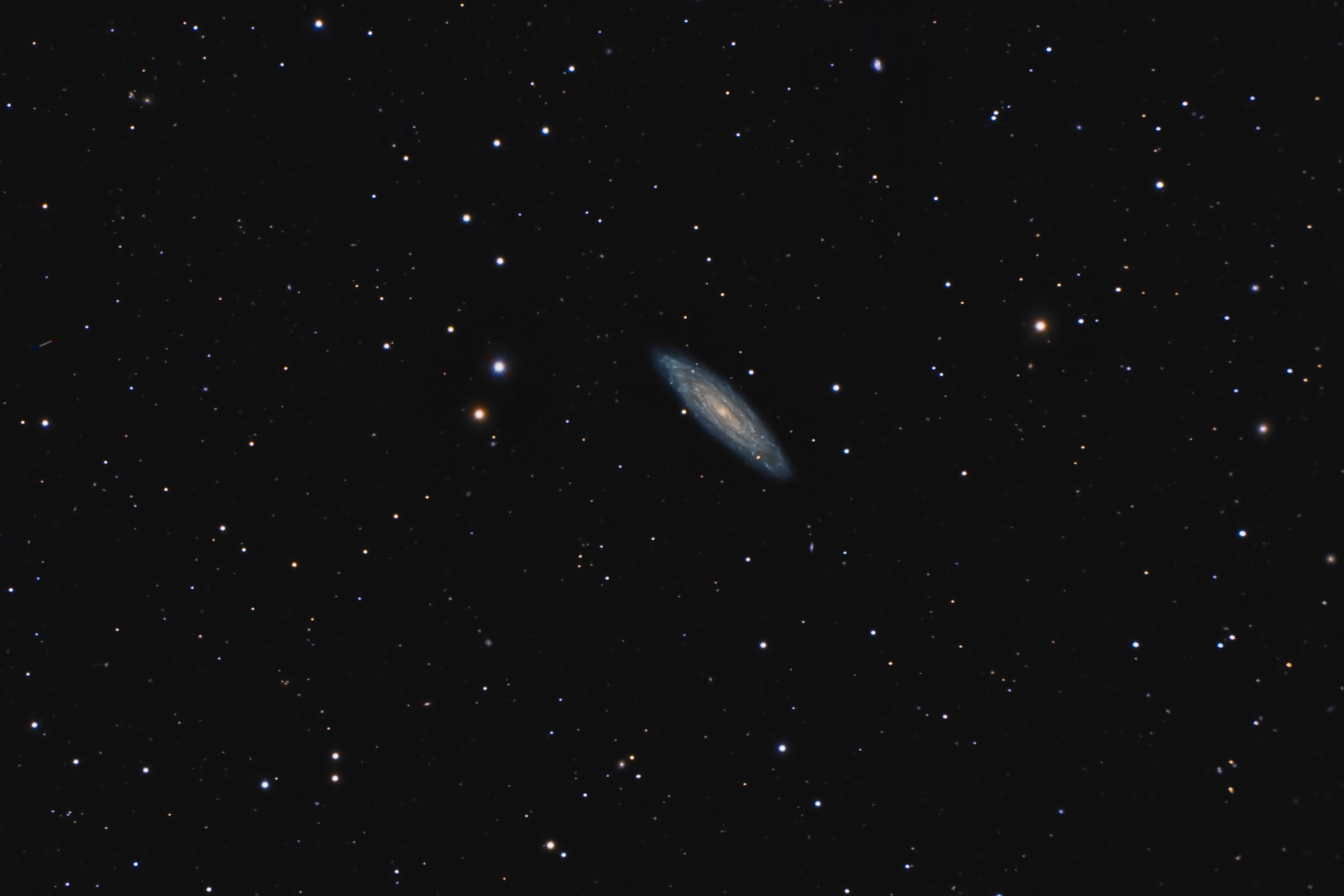 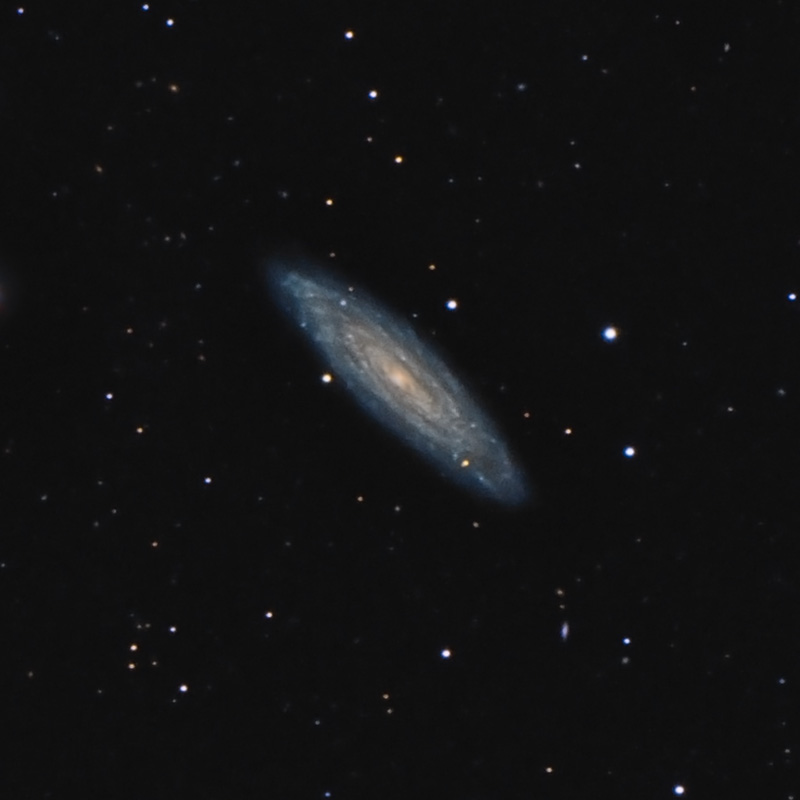 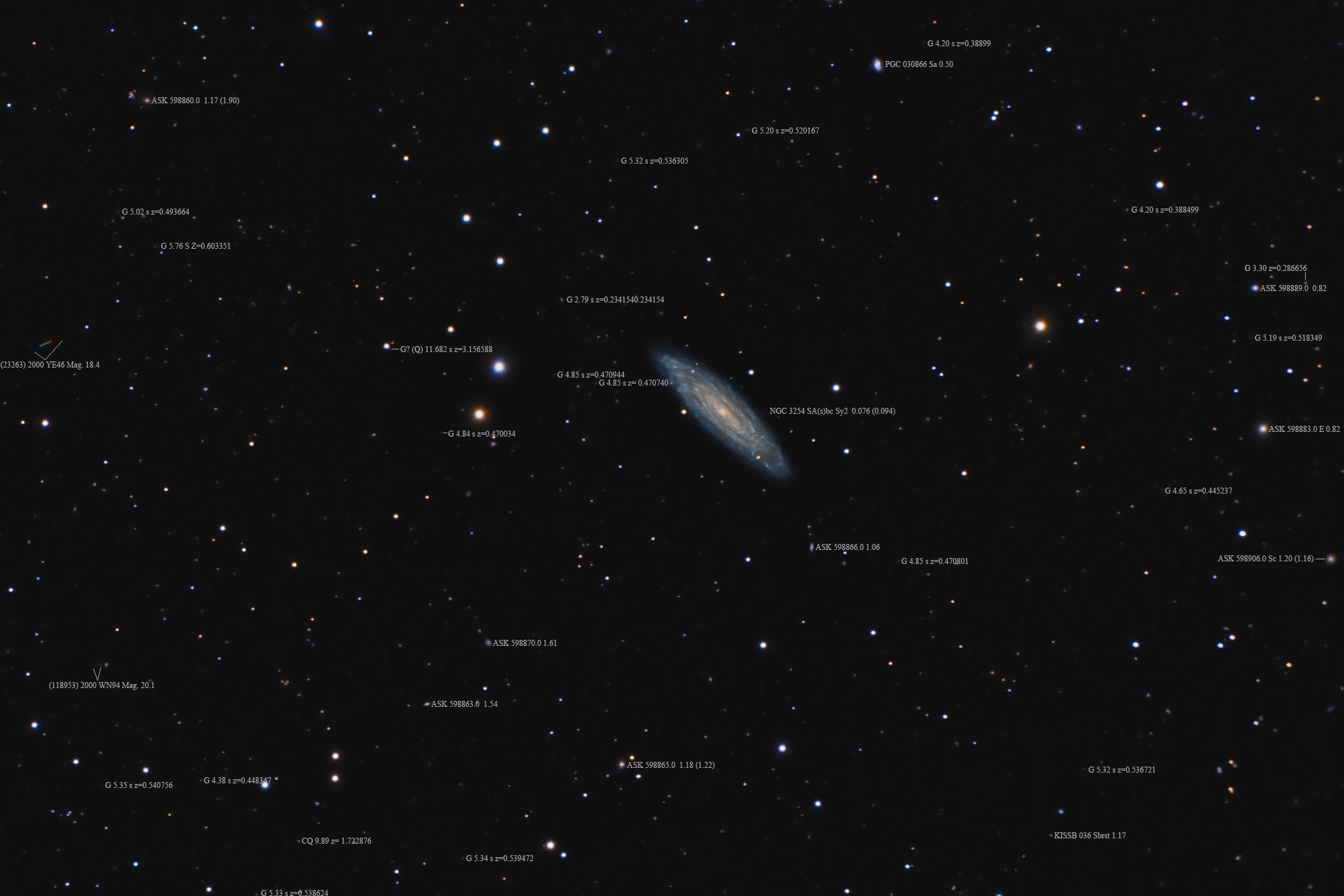