NGC 3319 is a barred spiral galaxy in Ursa Major about 45 million light-years away. It is odd in having a bright, high surface brightness bar with low surface brightness arms. Most of the current star formation is going on in the bar and some in small regions of the disk, mostly in the southern arm. NED classes it as SB(rs)cd while the NGC Project says SBc. Both agree it has HII emission from mainly the bar and southern arm which shows many bright blue HII regions in my image compared to the northern arm. It is quite symmetrical in the bar, just not in the disk. Radio shows the HI to be very asymmetrical as well. Why, considering it is a lone galaxy, is a puzzle. It was discovered by William Herschel on February 3, 1788. It is in the second H400 observing program.

In the upper right corned of my image is a galaxy cluster with a large bright cluster galaxy, likely a cD galaxy, at its core. It, and the galaxy are listed at 1.6 billion light-years. NED shows two entries for this cluster: WHL J103801.8+414625 with 23 galaxies and WHL J103801.8+414625 with 43 galaxies. No size is shown for either. NED describes the latter as a \"fossil group\". This term is used for clusters in which the major cD galaxy is the result of mergers of smaller galaxies in the cluster then for billions of years has had no further mergers since the initial round of mergers created the cD. This one appears to have a rather large edge on spiral with very unsymmetrical arms. This might indicate activity in the group after all. Though it is slightly closer by redshift so possibly isn\'t a member. The difference is small enough to be due to relative motion however. It quite likely is a cluster member. You can read more about these clusters at: http://www.esa.int/esaCP/SEMCFFOFGLE_index_0.html
http://www.gemini.edu/node/172
http://www.gemini.edu/node/258

It appears this cluster is part of Abell 1056. I\'ve marked the center of that cluster as NED has it. It is listed as 24 minutes in diameter so would include this group. Only problem is the cluster is listed at 1.1 billion light years not 1.6 and there are only 2 galaxies, even further east, with about (1.0) that distance. This is an estimate and if based on brightness of the fossil group galaxies would understate the distance. He tended to estimate distance based on the brightness of the tenth brightest member. That would be a member of the fossil group. It is listed with a richness class of 1 which has 50 to 79 galaxies. So likely it is just his estimate that is in error. Other than the cluster the field is rather unremarkable.

As is often the case its the omissions from NED that I have trouble with. There\'s a large smudge of a galaxy just east of the lone quasar in the image (southeast of NGC 3319). It is real, not a reflection as it shows in the POSS plates. But NED has nothing at that position. If you go up from the smudge and a tad right a very faint galaxy is seen. It is in NED at magnitude 19.1. Way wrong as the quasar is also listed at 19.1. But the integrated magnitude of the smudge would be about 19.1. Have they merged two entries? No filter is given for the magnitudes, usually that means they were taken with a V (green) filter. But it could be the filter for the quasar was very different from the galaxy and that accounts for the difference. Though they should have mentioned that.

Down and left a ways from the quasar and smudge galaxy is a cluster of very faint galaxies. Individually most, if not all (I only sampled a few), are listed in NED but no cluster is located at that position. Sure looks like one to me. Unfortunately, none had redshift data so its distance is unknown, at least to NED. 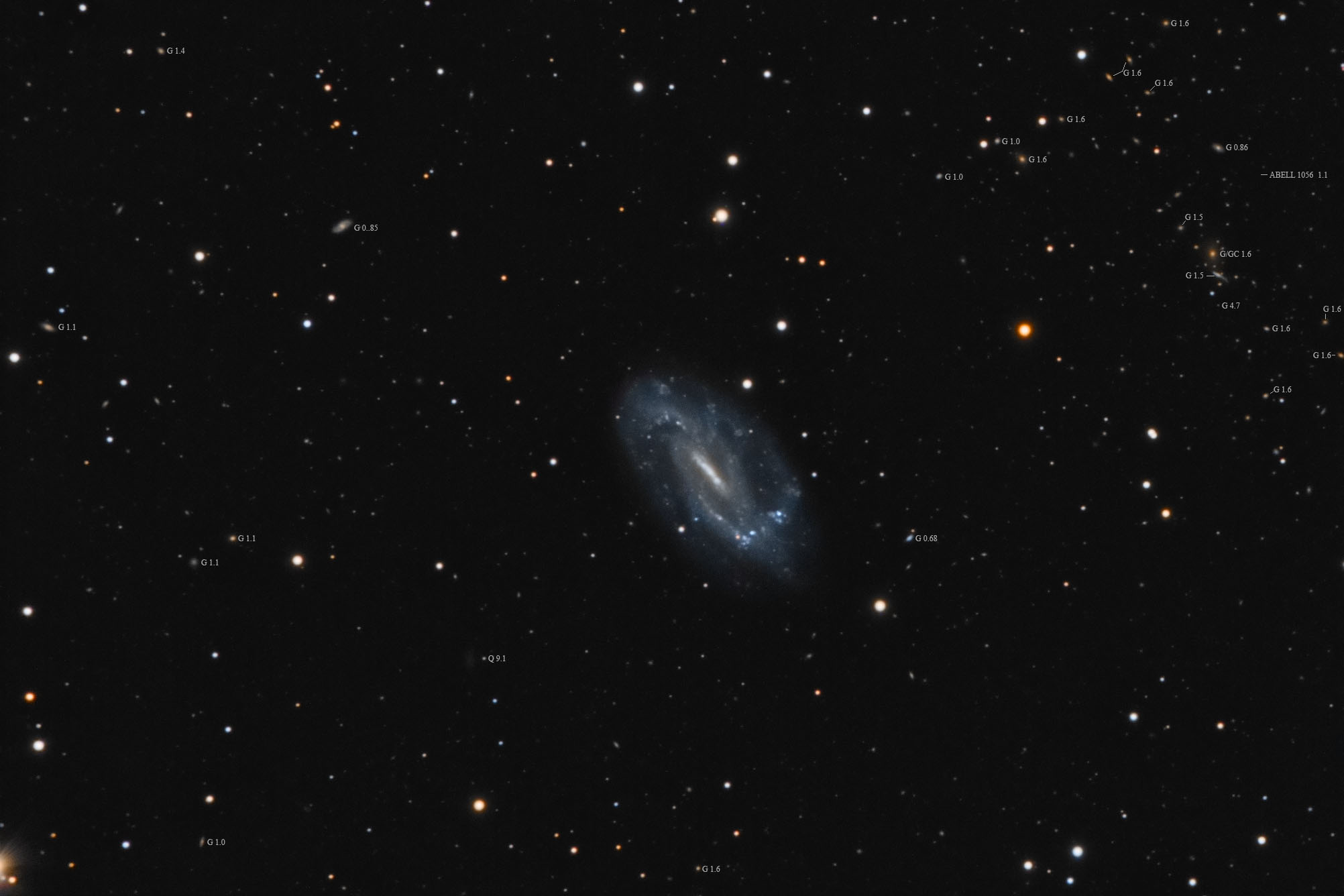 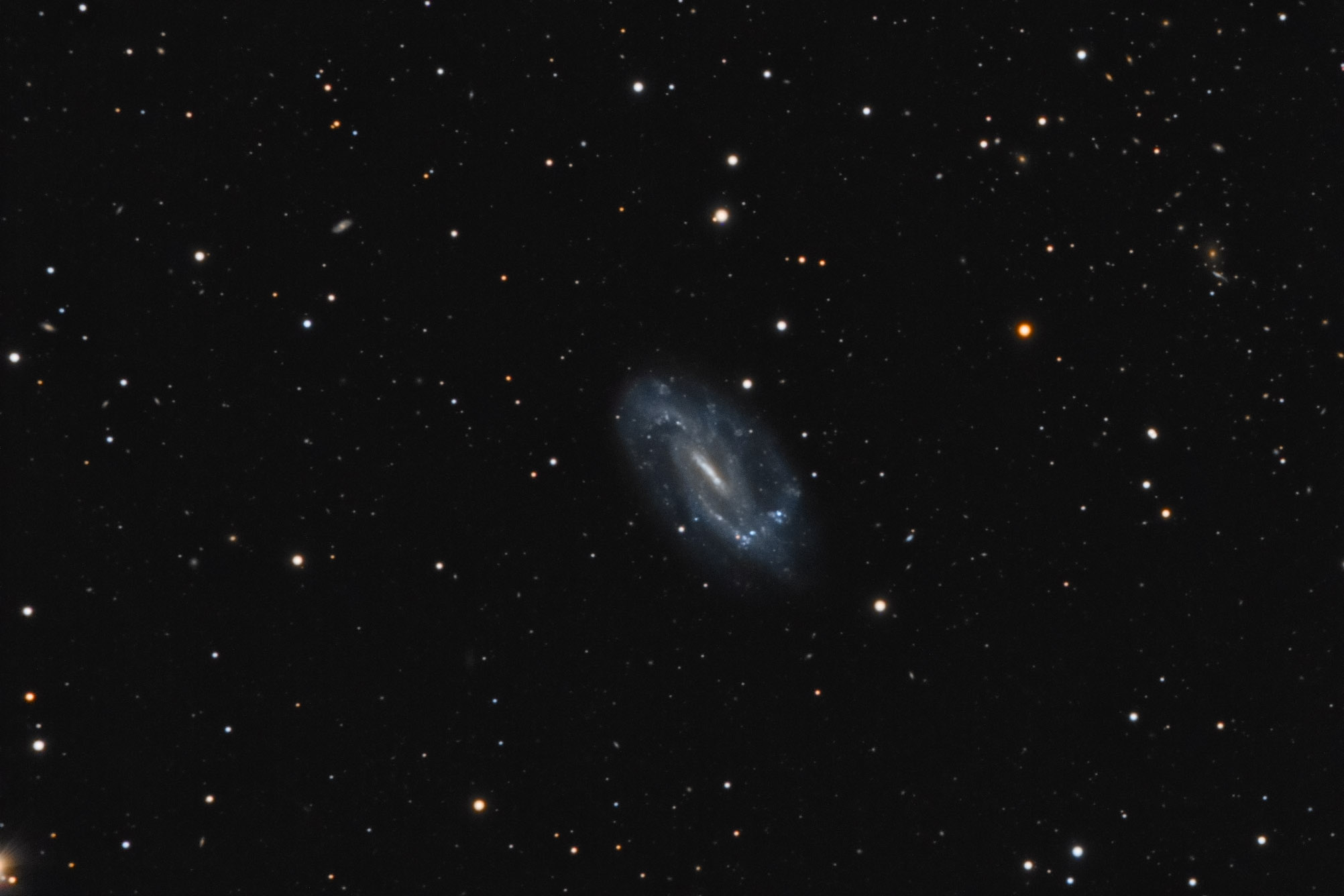 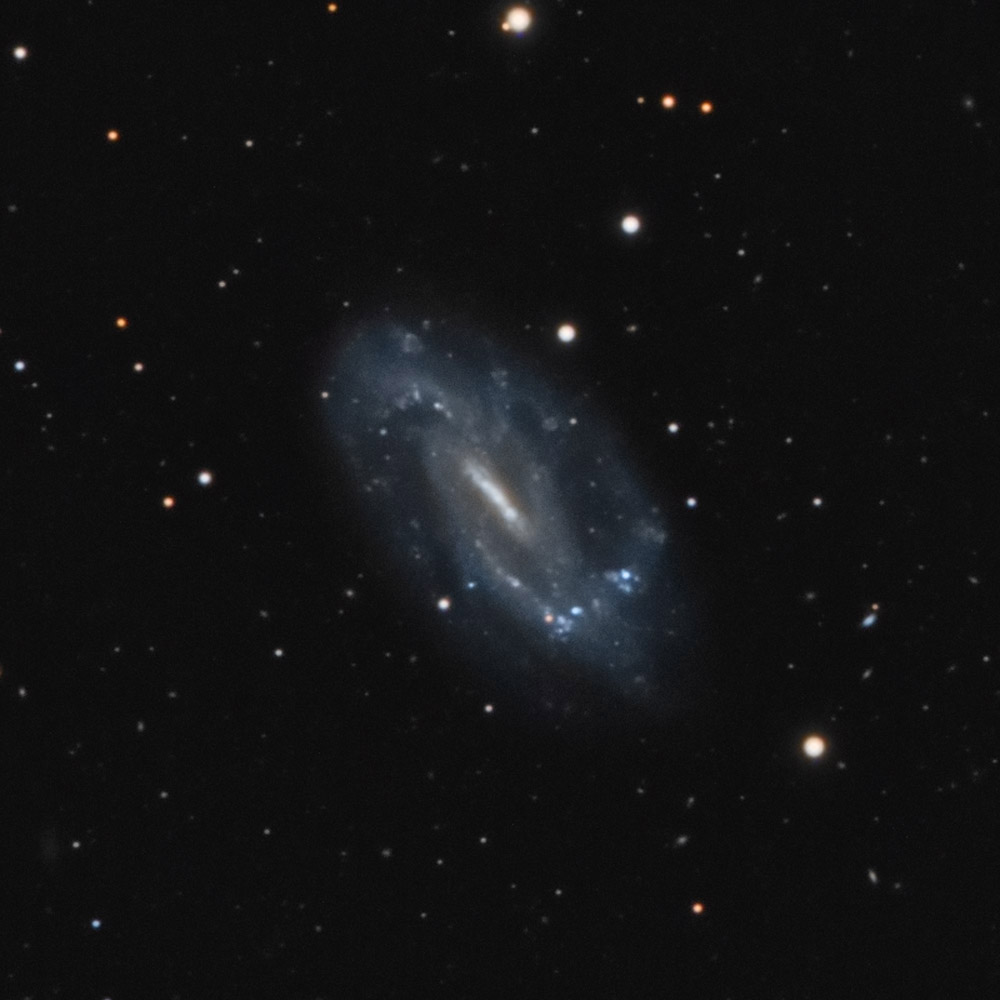