This galaxy field is located in Leo just north of Sextans border. My main target was NGC 3356 a somewhat distorted spiral galaxy. The nucleus seems south of its center and there\'s a drawn out arm or plume on the east side. It is just north of a much smaller galaxy. Both are about 300 million light-years distant by redshift. I doubt that little galaxy could have distorted much larger NGC 3356 so what did? NED shows another even smaller galaxy against NGC 2256. Is it really a separate blue galaxy or just a bright star cloud in NGC 3356?

To the west of NGC 3356 is a quartet of galaxies. At least three of them are likely interacting. The only one to make the NGC list is NGC 3349. It is listed as a WR galaxy. That means its spectrum is dominated by Wolf-Reyet stars. They are massive dying stars. For them to dominate a galaxies spectrum a very large number of massive stars had to have been created at about the same time. They lived their short lives and are now nearing the end of their lives. This likely means the galaxy was a starburst galaxy in the recent past but most of the star-forming activity is now over. Was this starburst triggered by interaction with one or more of the other galaxies? The companion, NSA 137928 has a large faint plume to the north. While the galaxy is mostly red the plume is somewhat blue. Catalogs show it as brighter than NGC 3349 but with more area, it appears fainter. To its south is SDSS J104352.20+064516.2, a very disrupted blue galaxy with a faint core. Its southwestern edge is sharp but the rest is very diffuse. The only distance estimate for it is by the Friend of a Friend method. That just means it appears to be at the same distance as NSA 137928. That appears likely due to the apparent interaction between the two. Did they also interact with NGC 3349 as its WR status might indicate?

The fourth galaxy has no redshift data or any other distance estimate. It probably is a distant galaxy just in the same line of sight but maybe not. I consider it unlikely but possible it is related to the others.

In the lower left part of the image is NGC 3362, a very photogenic SABc galaxy with a Seyfert 2 nucleus. Its redshift puts it only slightly closer than the trio of galaxies including NGC 3349. It would be a great sight if not for its great distance. It too is a very large galaxy. I measure its size as slightly over 145,000 light-years.

NGC 3349 comes in at a more typical 65,000 light-years in size. Its distorted companion is more difficult to measure due to overlap with the southern blue galaxy. I measure its yellow core at only 34,000 light-years but include the plume and it is a huge 160,000 light-years across. The way the blue galaxy fades away makes measuring it difficult. I got very different answers each time. I\'ll say 41,000 light-years but that\'s very approximate and assumes it is at the same distance as the other two.

To the lower left of NGC 3362 as a 12th magnitude star with something hiding behind its eastern edge. It appears to be a rather bright galaxy. But neither NED nor SIMBAD have anything there. Looking at the Sloan image there is a large oval yellow object there that appears to be possibly two objects that overlap. But the glare from the star may be a problem. What it is will remain a mystery unless someone finds a better image of the object. Not easy thanks to the foreground star. Another puzzle is ASK 231737.0. It is a third of the way between NGC 3362 and NGC 3356. It looks like a typical galaxy at its distance of 2.54 billion light-years but many catalogs say it is a quasar. Usually, the quasar drowns out the galaxy leaving only a bit of fuzz around the burned out core. Here I see no sign of a usually bright core. Just to its left is another galaxy trying to hide behind a much dimmer star. It didn\'t escape as did the other hiding object.

Otherwise, the annotated image has the usual assortment of objects including 3 rather dim asteroids. 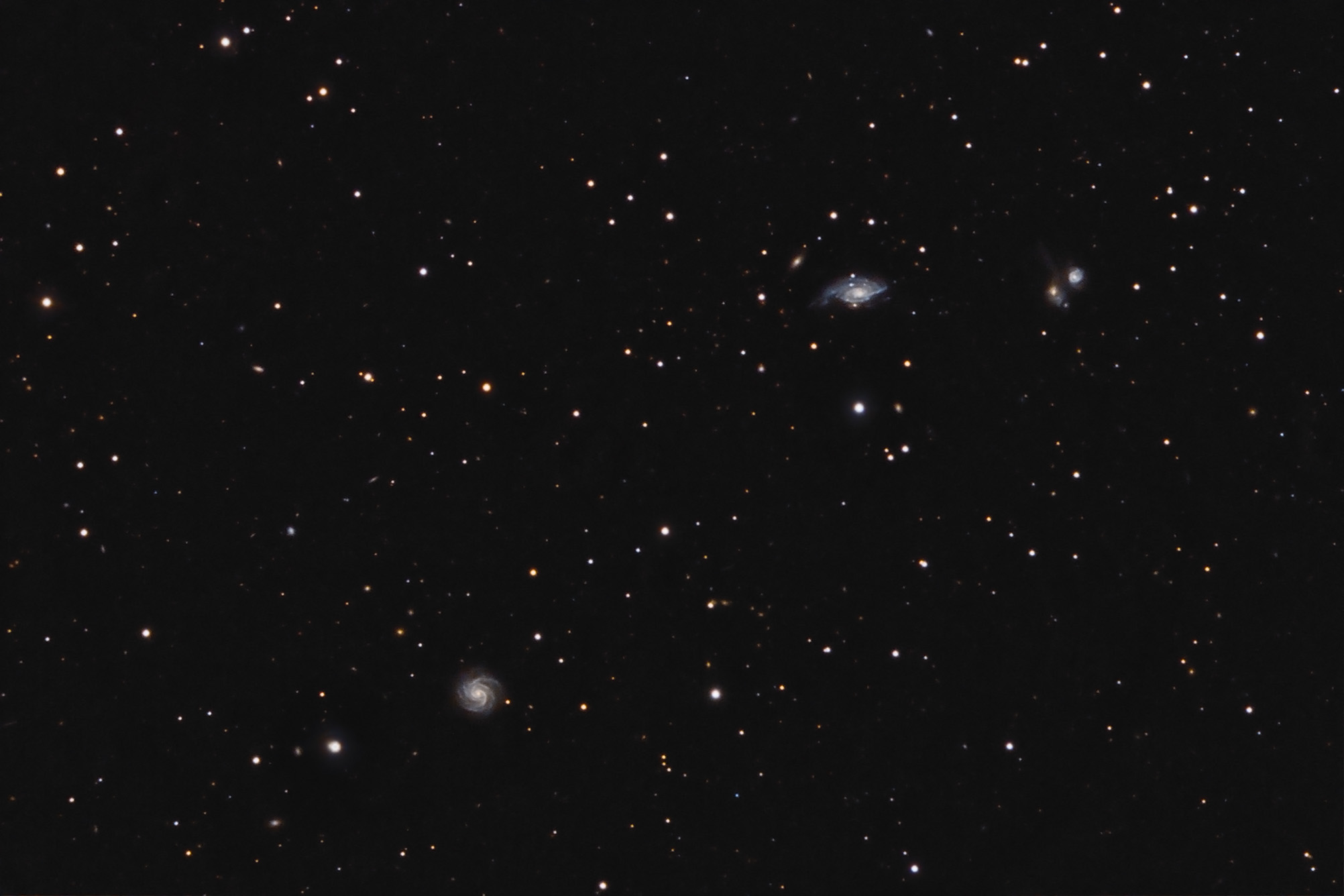 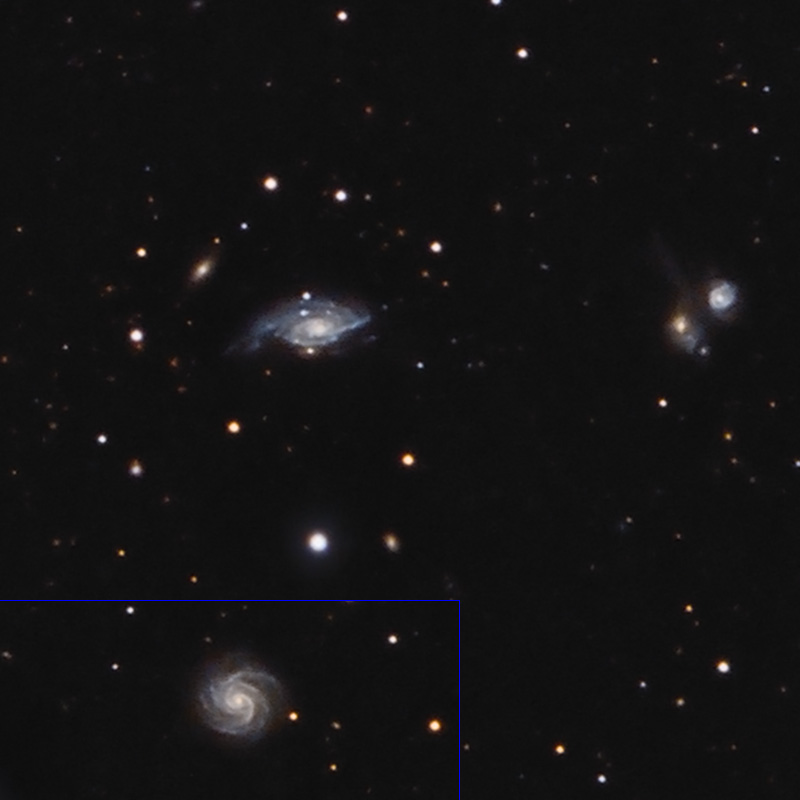 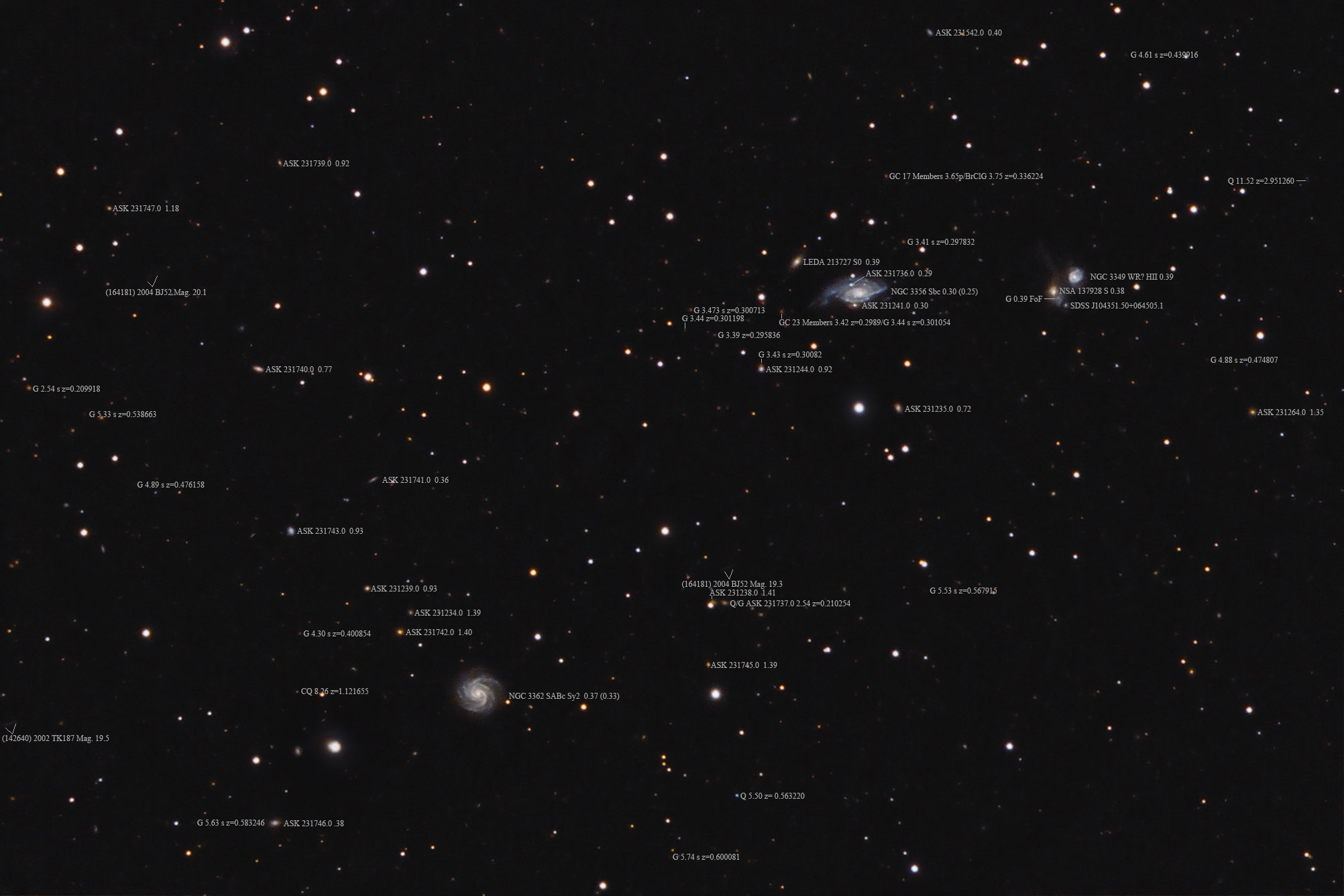