This one reminds me of some floating in space alien with a Men in Black style huge ray gun it\'s firing at something apparently off-screen. Or maybe I need a long rest.

NGC 3447 is a pair of interacting galaxies in Leo about 65 to 66 million light-years away. NED classes the larger western galaxy as SAB(s)m pec and the smaller eastern galaxy as IB(s)m pec. A Tully-Fisher measurement of them says 65.5 million light-years so there\'s unusually close agreement. The eastern member is odd in that the western end is full of bright knots of star formation while the eastern end is very diffuse with no visible structure at all. A golden object is seen at the NE edge of the western galaxy. NED shows it as an IR source in the 2MASS catalog and as an HII source in the Hodge+Kennicutt HII regions catalog. While an HII region can harbor new stars and give off a lot of IR the whole thing looks like a distant galaxy to me rather than an object in NGC 3447a. This mess was discovered by John Herschel on March 18, 1836.

SDSS J105329.58+164359.6 the small blue smudge under NGC 3447 at a redshift indicated distance of 63 MLY seems to be a separate dwarf galaxy. NED shows no classification for it. The three form an interesting triple system that has been little studied that I could find.

Near the right edge of my image on the center-line of the image is SDSS J105215.04+164446.4, an IR strong galaxy seen edge on. The southern arm is very finely defined. The northern one seems mostly missing! At 2.3 billion light-years it is tough to see much detail. Still to have a south going arm that size means it is a very large galaxy. The half a galaxy in my image measures 15.6\" of arc which at 2.3 billion light-years is 175,000 light-years. That\'s for its radius or 350,000 for the diameter if the other half is still there. It is faintly seen but very poorly defined. Why the difference?

WHL J105303.8+165221 is a galaxy cluster at 3.1 billion light years but the Big Cluster Galaxy (BCG) at its heart is listed at 2.8 billion light-years. A surprisingly large difference.

ABELL 1126:[QR95] E and ABELL 1126:[QR95] W are listed as two galaxies in the Abell 1126 galaxy cluster with the same exact position but slightly different redshift. I\'ve listed it as G 1.1/1.2 for this reason. To add to the confusion the position of these two? galaxies are almost but not quite the same as the core of the galaxy they seem to pertain to. NED gives the core the designation 2MASX J10535025+1651022/PGC 32713 at 1.1 million light-years which is listed as a spiral oddly enough and as the cD galaxy for the Abell 1226 group. It certainly looks like an elliptical galaxy to me. All this confusion about the cD galaxy for an Abell galaxy cluster seems odd to me. To its southeast is SDSS J105400.83+164843.2, a real spiral that is closer to the core of Abell 1126. Could these two entries be somewhat mixed-up? That galaxy is not categorized by NED at all, odd given its size, brightness and obvious spiral nature.

GMBCG J163.19257+16.60930 is a galaxy cluster in the lower right part of my image. It is listed with 65 members but with no size. It\'s position is within 1\" of the BCG for the cluster. The BCG\'s spectral redshift puts it at 4.2 billion light-years. The photographic redshift for the cluster says 4.1 billion light-years. To its southwest is another galaxy cluster, NSCS J105243+163554. Nothing is seen at its center. It is said to contain 27 galaxies at 4.4 billion light-years. No size is given. WHL J105238.1+163600 is likely another name for this cluster though with yet a different center and core galaxy though the two vary by about 1\" of arc. It too is 4.4 billion light-years and consists of 47 members in an undefined area. So are all three really one cluster? In any case, there\'s a lot of faint fuzzies in a band through the lower right part of my image.

South of these clusters is GMBCG J163.18556+16.56924. The BCG\'s redshift is from its spectrum while the cluster\'s redshift has been photographically determined. This leads to slightly different distances both about 4.7 billion light-years. The cluster is said to contain 17 members and again no size is given.

ZwCl 1051.4+1656 is a galaxy cluster centered south of Abell 1126 but includes it as its diameter is listed at 67 minutes and containing 345 members. No distance is listed. The label is centered on its central position though I see very little at that location.

SDSS J105237.45+164109.0 may be the most distant and faintest object I\'ve picked up in only a 40 minute exposure. NED lists its green magnitude as 24.8 with a redshift of z=4.815960. That, by their 5 year WMAP calculator, puts it at 12.5 billion light-years light travel time. Looking at it on the Sloan images it is actually very red though nothing came through on the color filters at this position, just too much light loss in the filters. This color is not unexpected since the wavelengths of its light are 5.8 times longer than when they left the quasar 12.5 billion years ago. My chip is rather insensitive to red but likely that is what made it visible in my image. You might need to enlarge the image by a factor of 3 or 4 to see the faint smudge but it is there and the center pixel is precisely at the correct position. It is seen in all 4 sub-exposures as well. It is west-southwest of NGC 3447 to the right of a very bright blue star and is labeled Q 12.5. 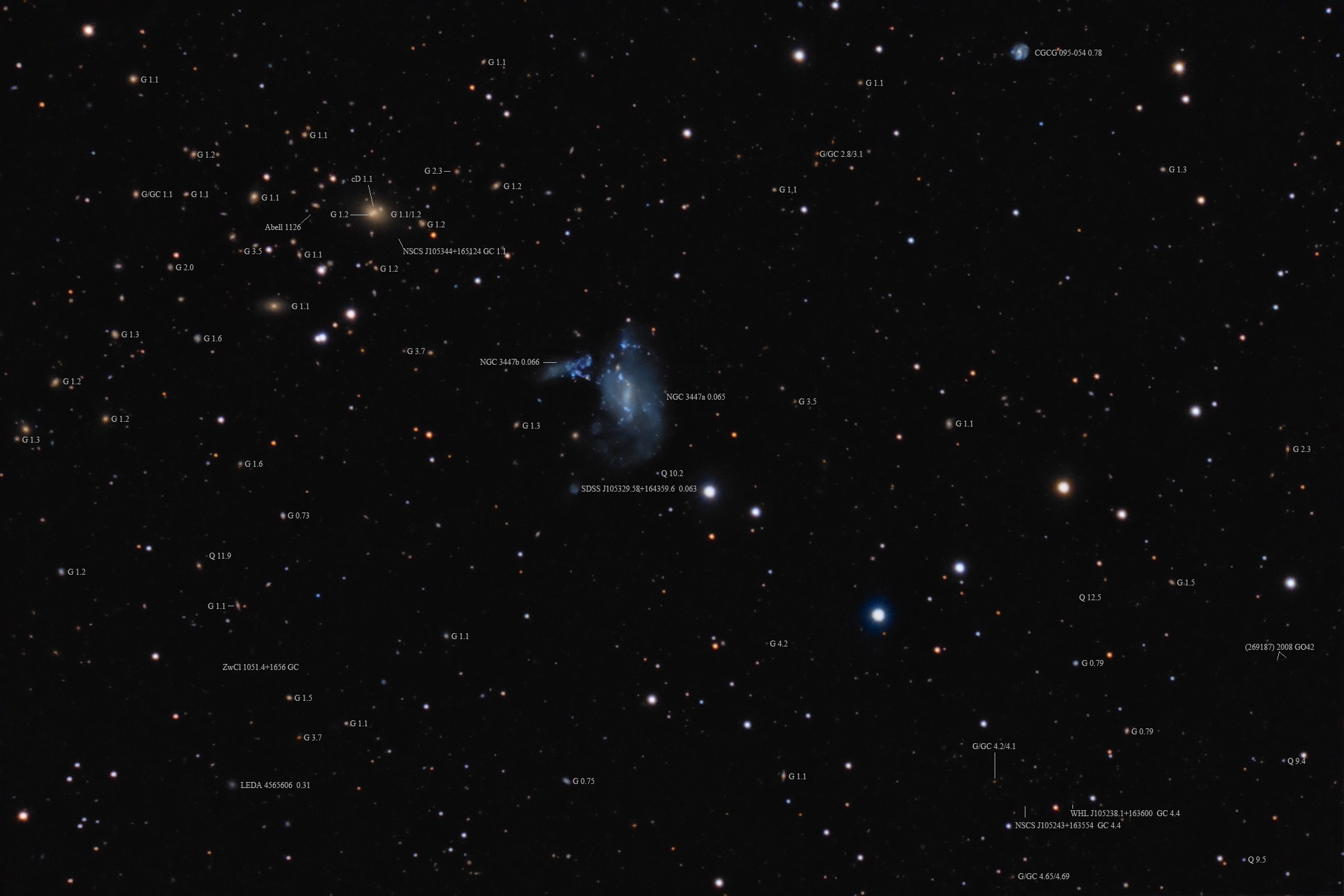 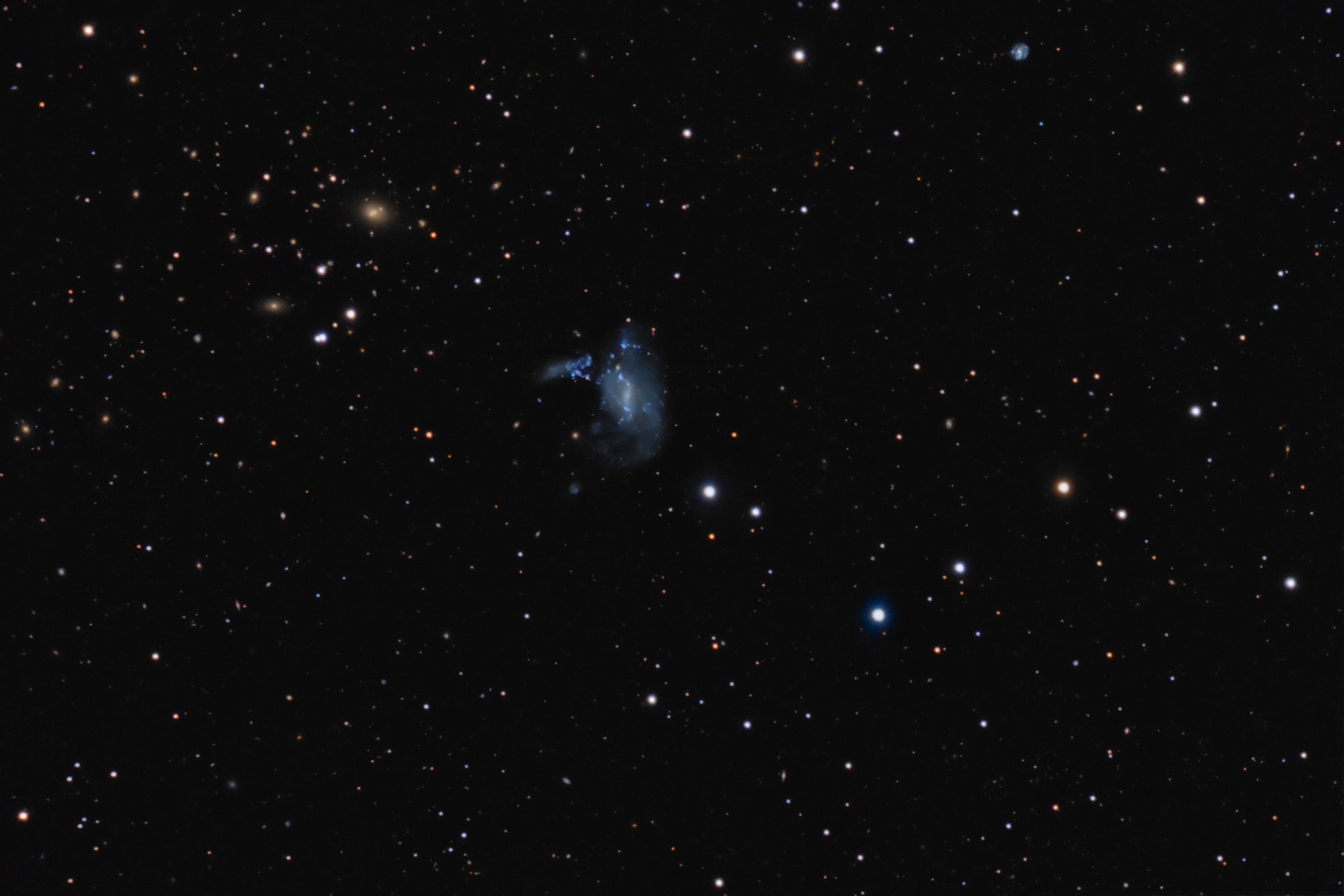 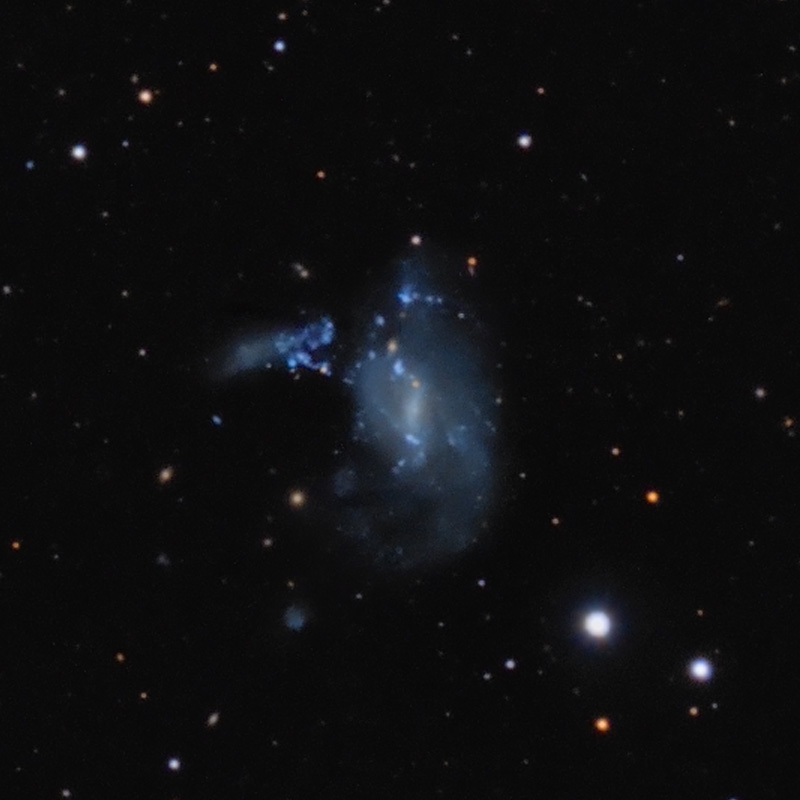