One note at NED says: \"Bright spindle with plume (NGC 3454), disturbed? by UGC 06028 (NGC 3455)...\" while another reads: \"Bright bar with knots and dark markings. Faint, smooth, outer arms. Edge-on. Non-interacting pair with NGC 3455 at 3.8 arcmin.\" So are they or are they not interacting? I found no notes on 3455 referencing the apparently distorted outer arms, especially the western one. About all I can see for a plume in 3454 is the southeastern ansa seems puffier than the northwestern one and seems to be off centerline toward 3455. I\'d surmise these features aren\'t unrelated and some interaction has occurred.

I put these off center to pick up NGC 3443 in the upper right corner. Its redshift is insignificantly different from the other two (I found no non-redshift measurements of its distance) so it is likely a member of the same group. Assuming the same distance it is 50,000 light-years in diameter or 76,000 at the 100,000 light-year distance. It is a rather low surface brightness spiral compared to the first two. It was discovered by Lewis Swift on April 24, 1887.

Also, a likely member of the group is ASK 617911.0 on the left edge of the image. Its redshift is similar. It seems to be quite blue with two odd star clouds NE and SW of the core though the SW one is below the major axis of the galaxy. The other small object just above the SW cloud is most likely a nearby star in our galaxy and not a feature of this dwarf galaxy. It is only about 11,000 light-years in diameter at its redshift distance. There\'s yet a fifth likely member of this group but my framing missed it. It is about one minute of arc above the upper left corner of my image. It is NGC 3457?/NGC 3460. There\'s some debate over this object\'s identity. See the NGC Project entries for these two if interested.

North of the center of the image is an oddly distorted spiral galaxy that\'s small in angular size but rather bright in its core though the outer arms are very faint. NED\'s only identification of it is SDSS J105353.23+173041.6. Since it didn\'t have a redshift distance it wasn\'t labeled in the annotated image.

Due to lousy weather, this one was taken over two consecutive nights. The first night was clouded out after 4 luminance frames. The second night I started again to take the color data but discovered I was taking more luminance instead. I stopped the run and restarted it for color data. By then it was too late to get a complete new object so I decided to take 4 more luminance frames with the time remaining not trusting those I\'d gotten the first night. At the time I didn\'t realize there was a very bright asteroid in the field. Turns out I picked it up both nights. Due to the gap between the first and second luminance frame, it made three trails in the top of the image. The asteroid, discovered by the German astronomer Joseph Helffrich in 1910 and apparently named after the far more famous Italian astronomer Galileo (is Galilea the German spelling of Galileo?) The naming of early asteroids is covered by a copyrighted book so the Minor Planet Center can\'t give out that information. So this is only a guess on my part. Does anyone have better info?

There\'s a 20th magnitude asteroid in the image which I show in the annotated version. Since it shows in only 4 (in only the first night\'s images) of the 9 frames it is nearly invisible in a mean stack of the data though very obvious in the raw data. It barely shows up due to this and the rather poor transparency that first night. 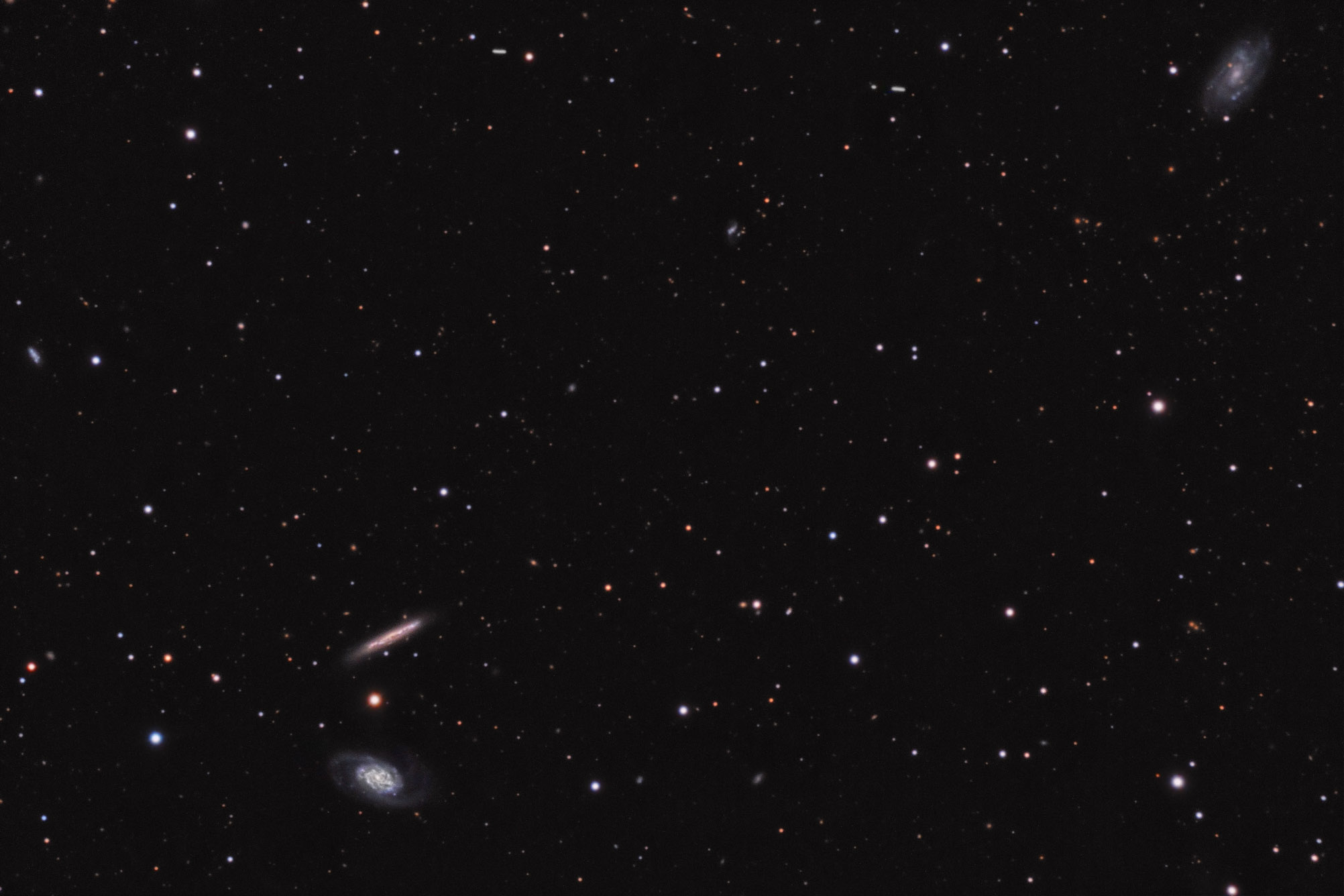 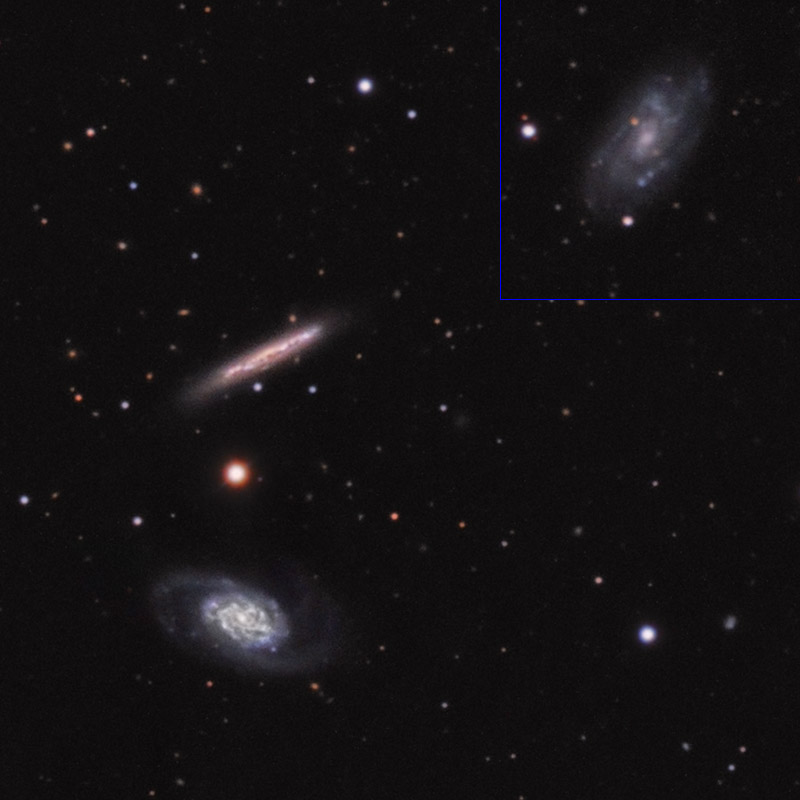 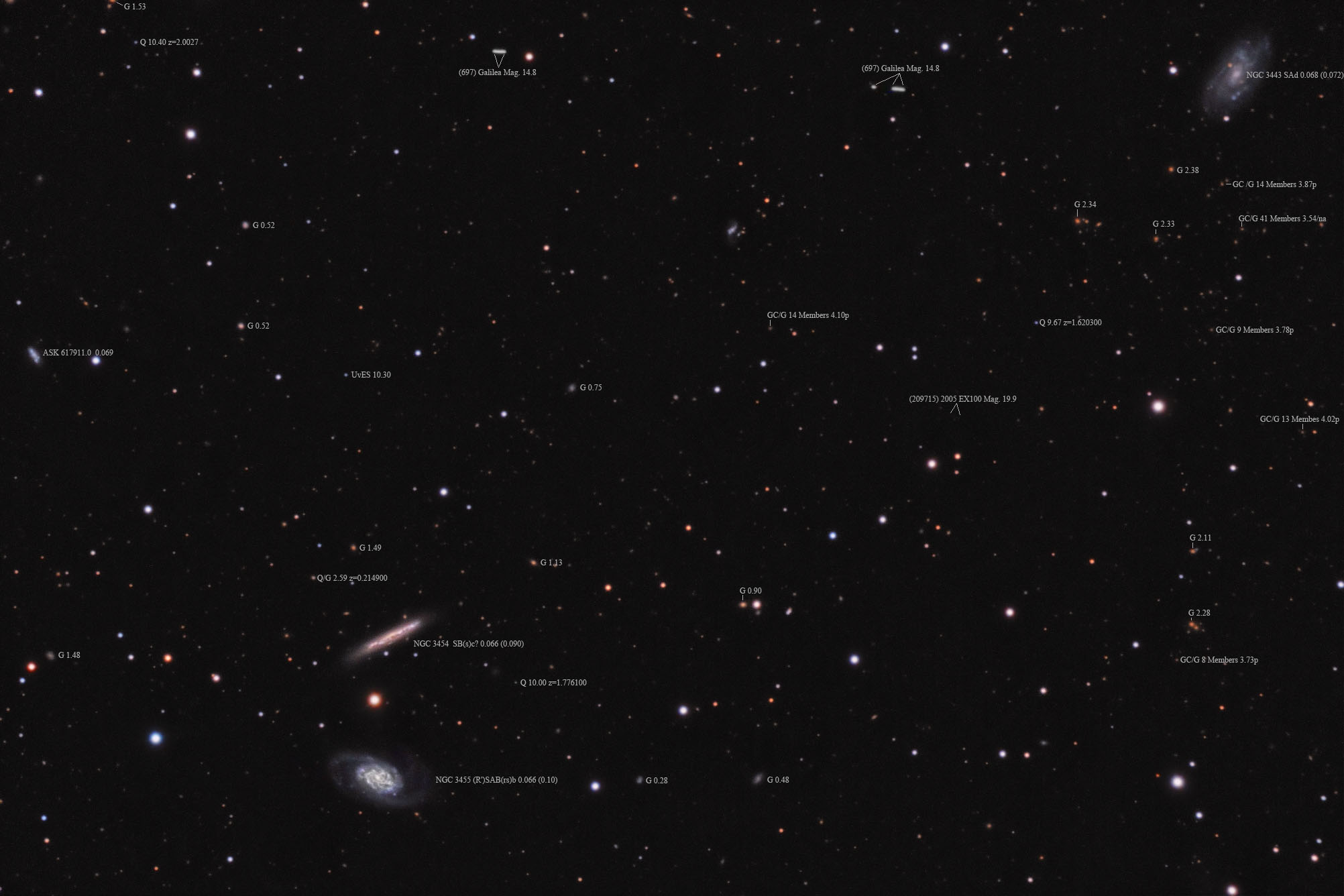