NGC 3501 attracted my attention as it is a neat flat galaxy being #1187 in the Flat Galaxy Catalog. It is classified as Scd by NED and Seligman but the NGC project says Sc. I suppose this difference is partly due to the difficulties of classifying a galaxy seen edge on. Note the lack of any hint of a central bulge. Since there is an apparent correlation between the size of the central bulge and the size of the black hole in a spiral\'s core it would appear this galaxy has a very small black hole. Also, I saw a recent article saying galaxies without a central bulge have had few if any mergers. I\'m not sure I buy that one. The galaxy is located in Leo and is about 68 million light-years distant by redshift and 78 million light-years by the median of many Tully Fisher measurements. Using the redshift distance I get a size of about 80,000 light-years. The galaxy was discovered on April 23, 1881 by Édouard Stephan. I\'m surprised William Herschel missed it.

When I saw I could fit the face on spiral NGC 3507 in the same frame I changed my aim point to include both galaxies. NED classifies it as SB(s)b LINER. Others agree. It certainly is a classic two arm barred spiral. Redshift puts it 61 million light-years distant while two Tully-Fisher measurements say 52 million light-years. Since it is likely these two are related though not interacting I assume they are both about the same distance. Using the redshift distance I get a size of 59,000 light-years. Seen face on it gives the illusion of being larger than NGC 3501 which is not true. This galaxy was discovered by William Herschel on March 14, 1784 which makes it all the more surprising he missed NGC 3501. This galaxy is in the second Herschel 400 observing program. The annotated image points out what is likely a star cloud in the galaxy. It is quite blue so likely full of massive, hot, young stars. It is listed only as Part of a Galaxy by NED.

Near the lower right corner near the right edge is ASK 619400.0. In my poorly resolved image (seeing was poor this night) it seems to have two blue blobs at the top and a red one to the south. Indeed, the Sloan image shows this is a group of three overlapping galaxies. What I can\'t find out is if they are interacting or even related. NED gives the trio a redshift of 1.16 billion light-years but is this true of all parts or just the brightest one. If this is about to be a major collision, things could get interesting in a few million years. I\'ve included the much clearer Sloan image. It may be just two galaxies rather than three. Hard to tell but looks to me like the right one is in front of the main galaxy with the other behind.

Three asteroids show faintly in the image. Due to poor seeing, they are rather faint and fuzzy. Details are in the annotated image. 2016 EW80 was just discovered this year. I took this image on March 12. I note the position given by the Minor Planet Center is off by several seconds of arc. Usually, they are quite accurate. They are asking for observations of it starting April 17. Their last observation was March 10, just two days before my image was taken. The orbit was determined by a 35 day arc so it was likely found in early February. 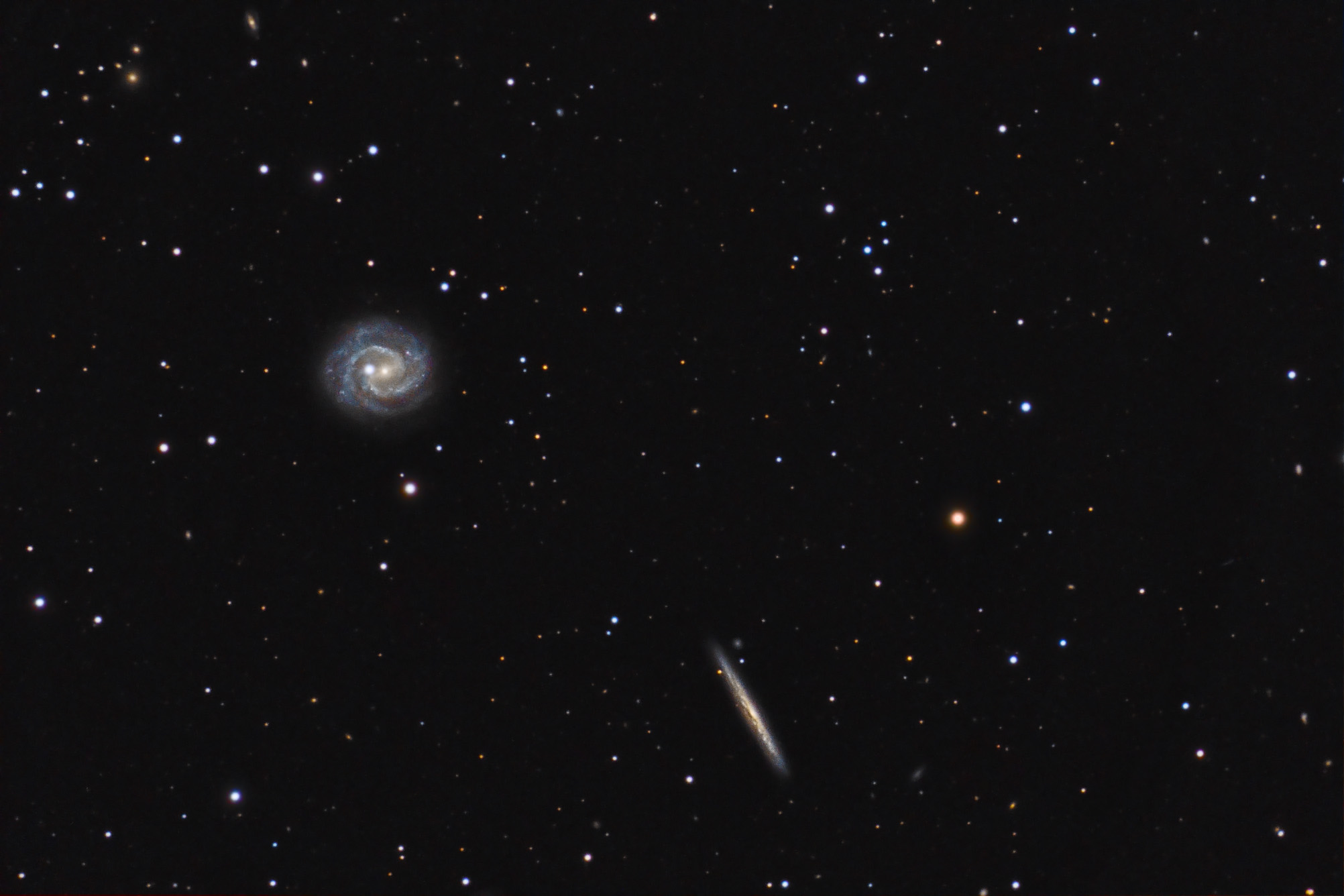 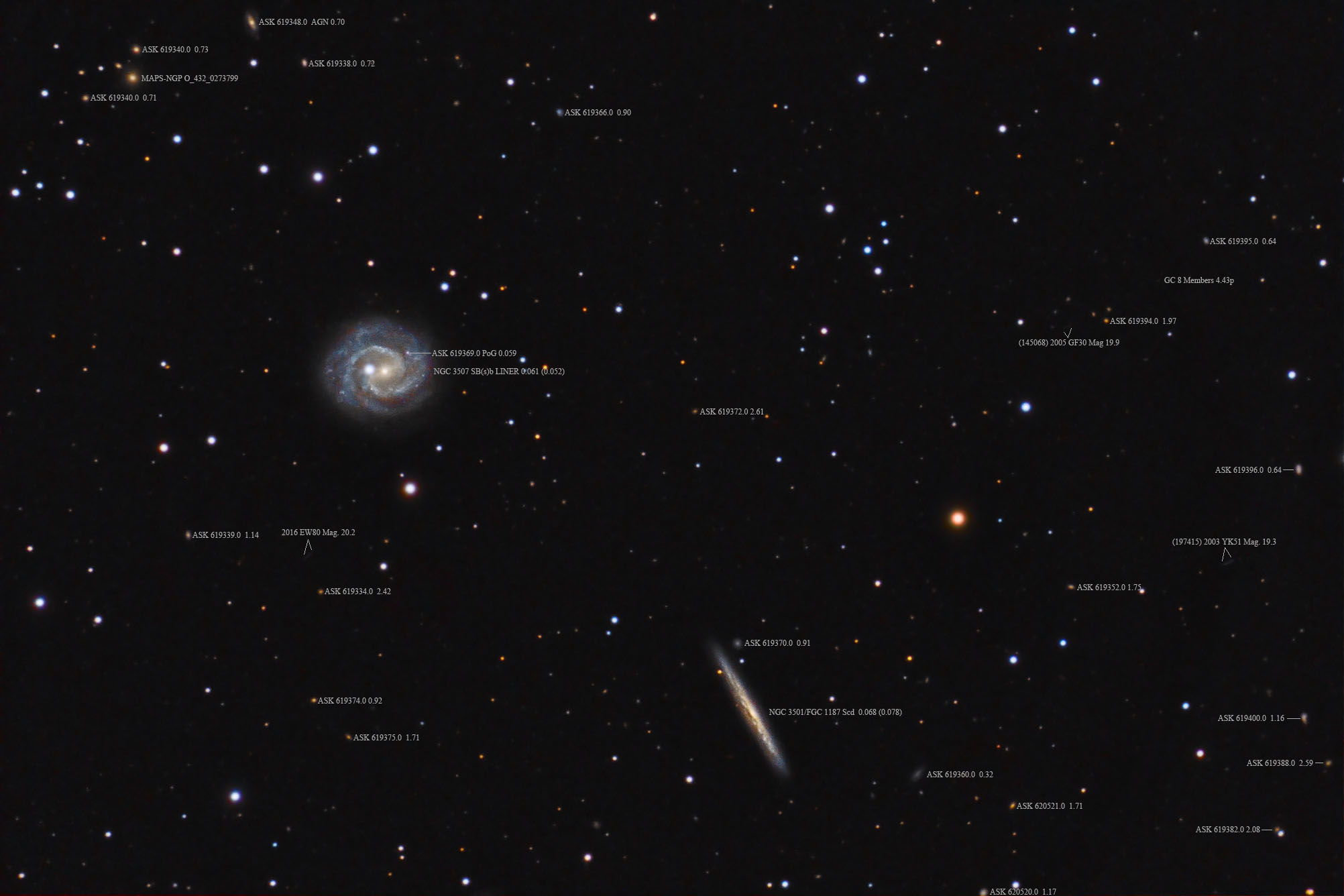