NGC 3504 and NGC 3512 are two interesting near face-on spiral galaxies in eastern Leo Minor near the border of Leo and Ursa Major. Both are considered by some to have starburst cores but NED makes no mention of this in its classifications. These are two rather photogenic galaxies mostly ignored by the amateur imaging community. I didn\'t find even one image of these at Astrobin or the Cloudy Nights imaging forums. Both were discovered by William Herschel on April 11, 1785. NGC 3504 is in the original H400 observing program. I saw NGC 3504 on April 15, 1985 on a night hurt by high humidity. Using my 10\" f/5 at up to 150 power my entry reads \"Large, circular galaxy with a brighter nucleus. Nearby 14th magnitude star on top of the galaxy near its edge. Little detail was seen.\" Sound like I was seeing the outer ring? I\'d think that too faint. So why the circular comment. At least I got the star right as I measure it on my image at 14th magnitude. But it\'s at the edge of the elongated bar, not the ring. Another case of needing Mr. Peabody\'s Wayback Machine. I made no mention of NGC 3512 for some reason. Maybe the night was too poor to see it.

NGC 3512 appears a more normal classic spiral but NED indicates it has elements of a barred galaxy. It too has a starburst core by papers I saw. Its two main arms are not at all symmetrical. The core seems off center to the ring they form in its central region.

There are a number of candidate quasars in the image. Most seem to have spectroscopic distance measurements that should be accurate. If so I suspect that they will eventually achieve confirmed status. Most catalogs already have decided they are.

Otherwise, the background galaxies are pretty much what I get in this part of the sky. Transparency wasn\'t what it was a few weeks earlier so fewer very distant (over 5 billion light-years look back distance) galaxies are seen. Several NED indicated were bright enough for me to catch on a typical night just didn\'t come through the gunky night\'s skies. Knowing it a bit gunky I used 50 minutes of luminance rather than 40 but I needed more to compensate for the lower transparency. 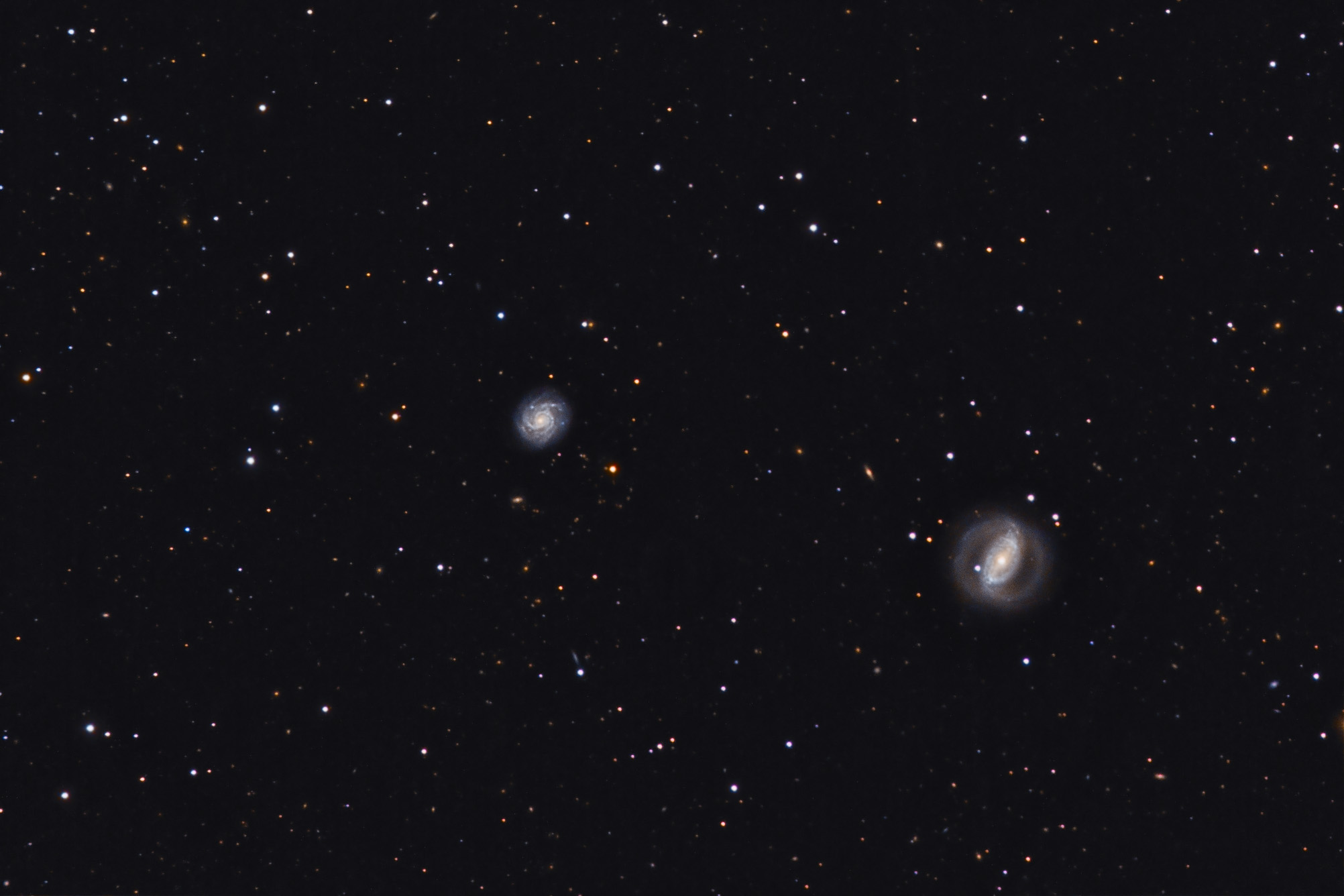 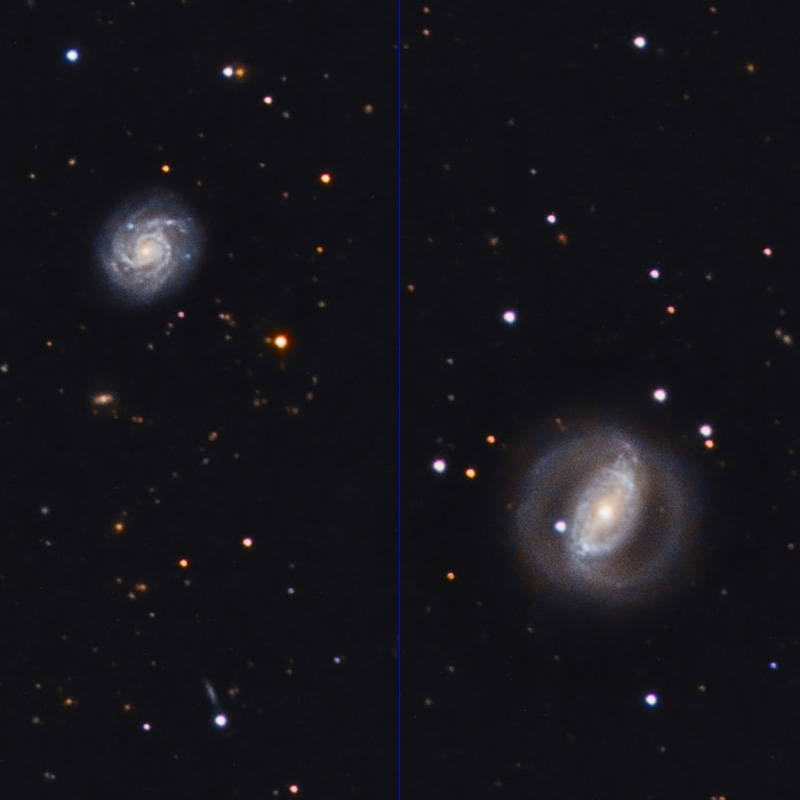 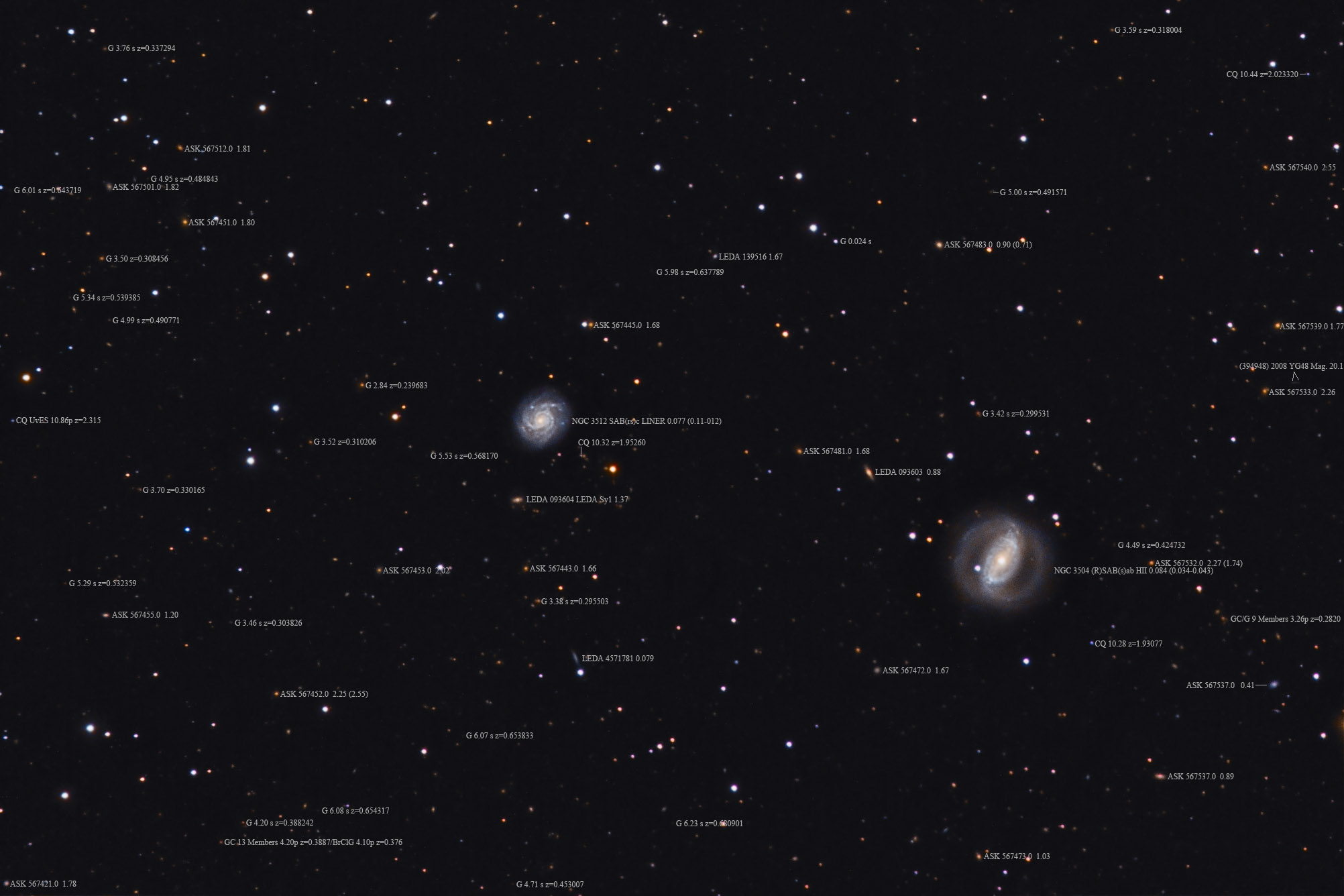