NGC 3583 is a barred spiral, SB(s)b, in Ursa Major about 110 million light-years from us. It would fit Arp\'s category for spiral galaxies with a high surface brightness companion on its arm. Sometimes the companion was a true companion but most of the time either we still don\'t know or it wasn\'t a true companion. This time however it is a true companion and he didn\'t include it. Both have about the same redshift indicating they are related. Most sources NED notes call it an E0 galaxy. I find that odd on two counts. First E0 should be spherical and it is distinctly oval. Also, most E0 galaxies are rather red this one is blue though when IR is added to the mix by the Sloan survey it turns white. Still the wrong color. While it doesn\'t appear to be interacting I can\'t help but wonder if its shape indicates interaction has occurred, likely in the distant past. Something has to have triggered strong star formation in the last billion years or so for it to have this blue tint. NGC 3583 was discovered by William Herschel on February 5, 1788. It is in the second H400 program.

On the other side is what to me appears to be a bright knot in NGC 3583\'s western arm. I have indicated this knot with a question mark. NED considers it a separate galaxy rather than a part of the galaxy. No papers I find mention it however as being another companion. They only refer to the E0 and NGC 3577 5 minutes to the southwest. I still think it part of the galaxy until more data comes in.

West of NGC 3583 is the galaxy cluster GMBCG J168.46640+48.31697. In this case, the distance to the cluster it shows as being estimated photographically while the BCG that anchors the cluster and is highly visible in my image doesn\'t carry this note. Their distances vary though not by much. I\'ve listed both though I feel the difference is due to the difference in error bars between these two measurement methods. The cluster is listed as having 11 members with no cluster radius given. It is 3.5 to 3.6 billion light-years away depending on which estimate you believe.

Southwest of NGC 3583 is NGC 3577. It too is a barred spiral, SB(r)a by NED and SBb by the NGC project. Arms seem too spread out for NED\'s classification so I prefer that of the NGC project. It is what I call a lawn sprinkler galaxy. The bar is long and thin like my old walking lawn sprinkler which spun at high speed and when viewed out my second story window had water going out in a spiral much like the arms of this galaxy. It too seems to have a companion on its arm to the northeast. In this case, however, I think it likely it is a very distant galaxy. Unfortunately, there\'s no redshift data to settle the issue. The companion is SDSS J111346.01+481650.8. NGC 3577, at 250 million light-years, is over twice as far away as NGC 3583 so they are unrelated, they just share nearly the same line of sight as seen from earth. NGC 3577 was discovered by William Herschel on April 1, 1788. It isn\'t in either H400 program.

NGC 3577 does have a real companion, MCG +08-21-004, also at 250 million light-years. It too is a barred spiral and a very blue one. NED, however, doesn\'t classify it or give any more detail on it. Could it have interacted with NGC 3577? Yes, but that doesn\'t mean it has. It has a shape similar to a couple Arp put in his integral sign class though, like them, I see only a very remote similarity to the sign. How or why Arp missed this three for one field I don\'t know.

To the northwest of NGC 3583 is SDSS J111345.41+482405.4, a dwarf galaxy at 100 million light-years. It could possibly be related to NGC 3583 though I saw nothing indicating this. Since I\'m rounding and these distances are estimates they could be considerably closer than the 10 million light-year difference would indicate.

Southeast of NGC 3583 is another galaxy cluster, GMBCG J168.76711+48.22342. In this case, both the galaxy and BCG have photographic redshift measurements which agree. Likely because it is a single measurement. It shows it to be 4.7 billion light-years distant with 8 members. No radius is given. To its northeast is another cluster, GMBCG J168.85254+48.25542 at 4.6 billion light-years. The galaxy just to its north is likely much closer and not part of the cluster though a few other fuzzies in the area could be members. NED shows it with 12 members but again, no radius.

Yet another galaxy cluster is in the lower right corner, GMBCG J168.17596+48.17003 consists of 8 members again in an unknown radius. Its photographic redshift shows a distance of 4.7 billion light-years. 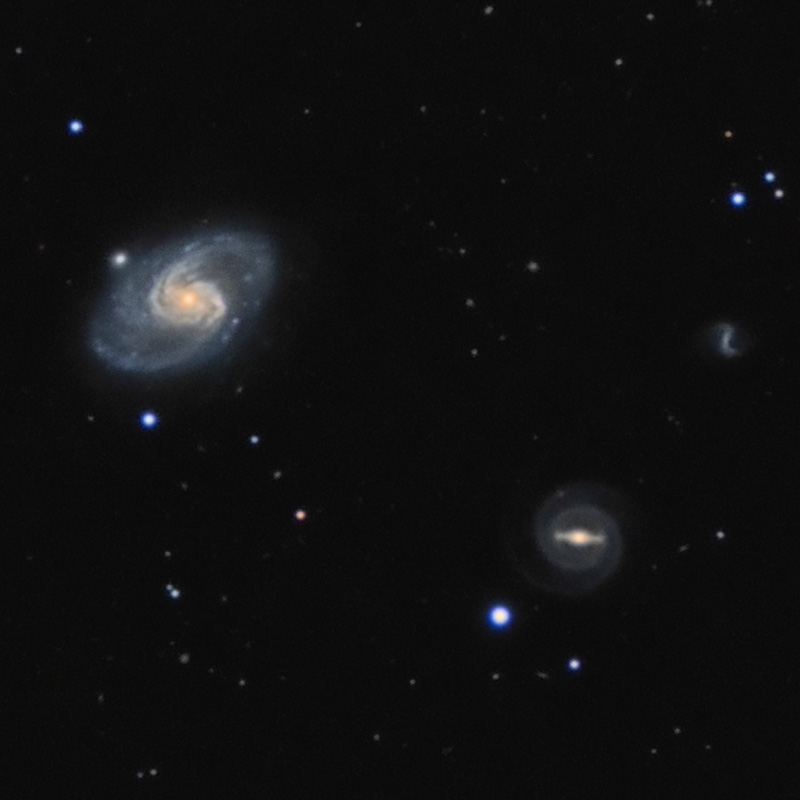 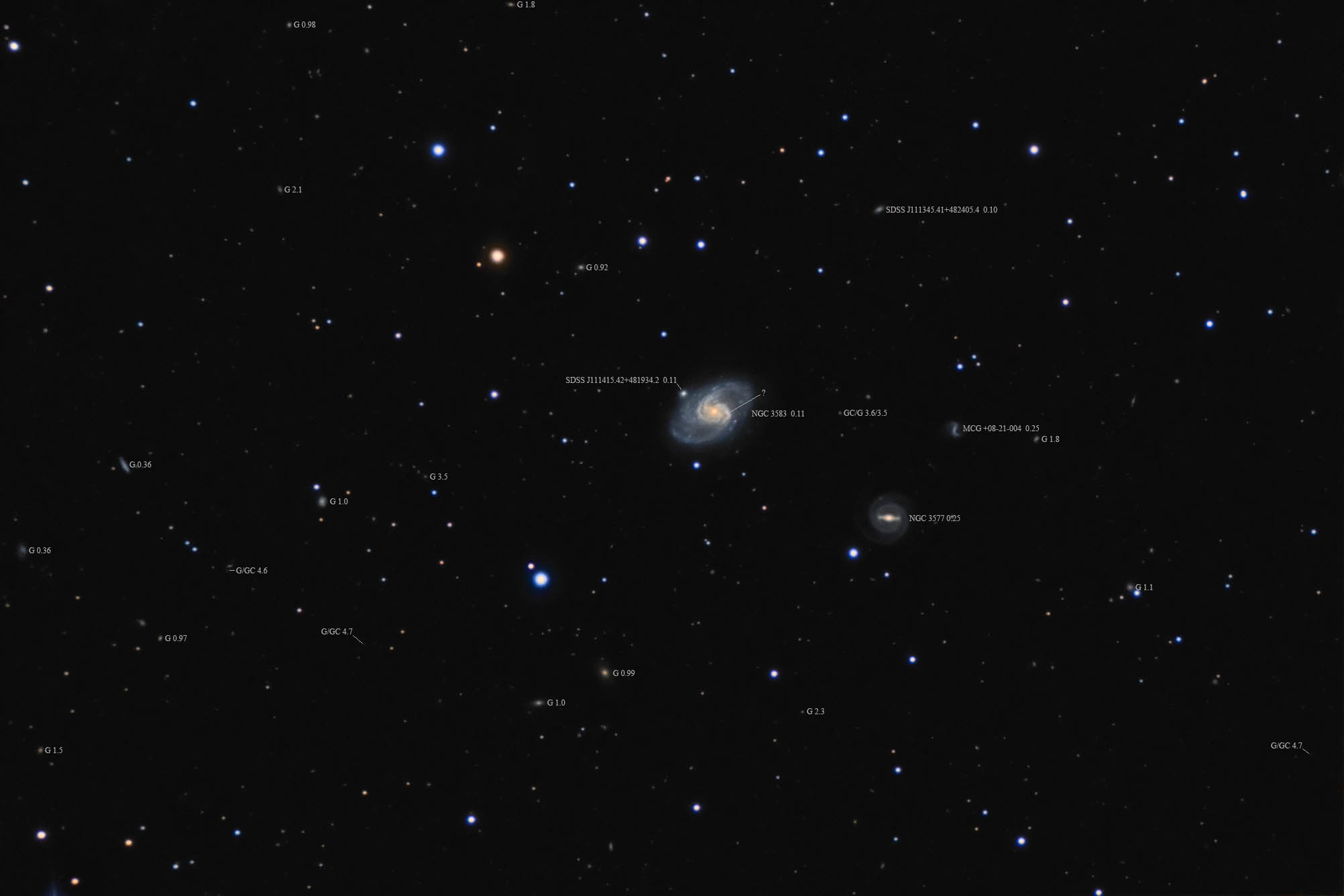 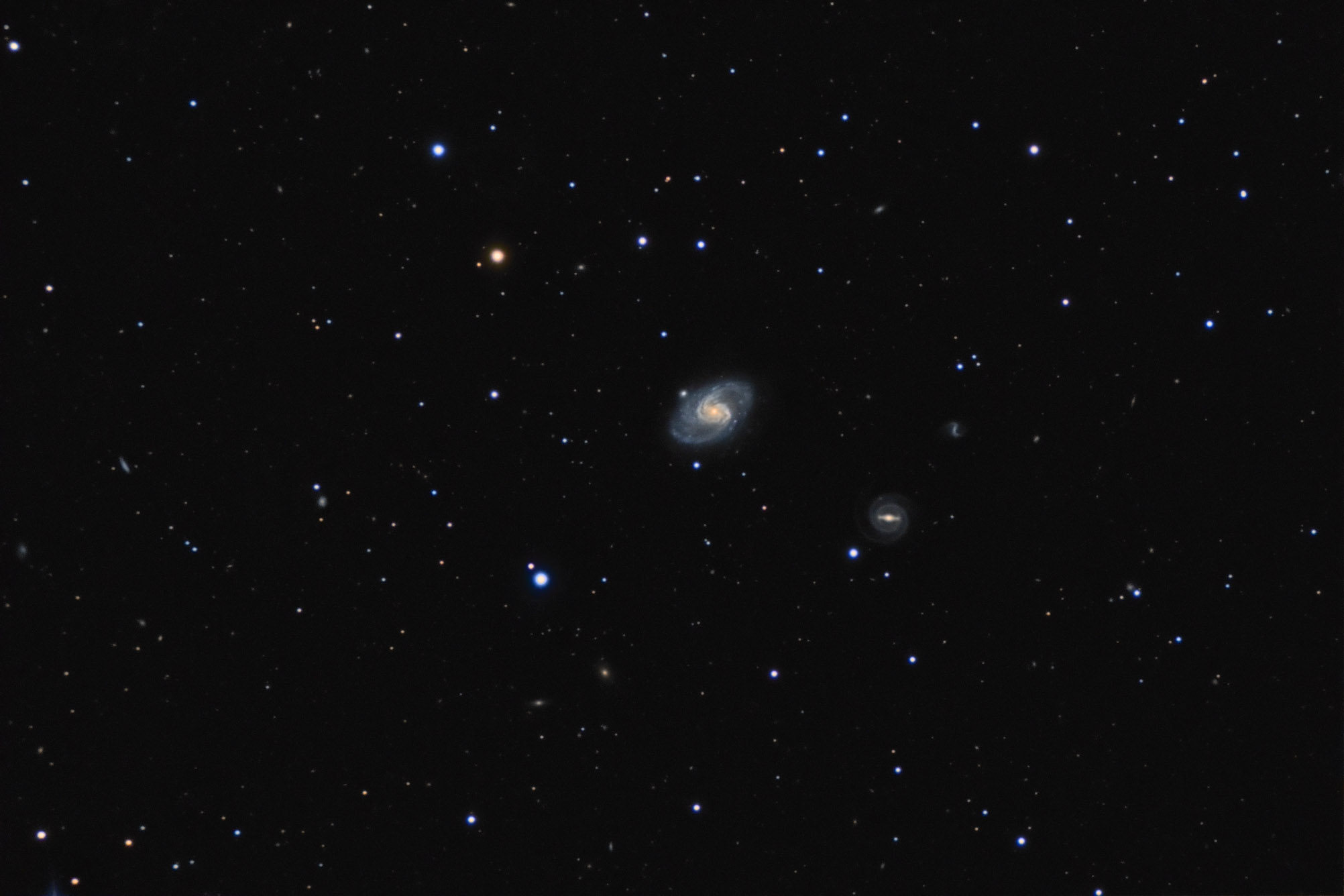