NGC 3683 is a rather strange galaxy in the bowl of the Big Dipper. It\'s tilted dust lane is what first attracted me to this one. Later I realized it was in the Herschel 400 II observing program, another reason to be on the to-do list. I figured the odd dust lane is due to a merger with another galaxy or at least a close interaction with one. I found nothing in the literature even discussing this odd feature. It is noted in passing in over 100 papers but about the only ones giving it much time are those covering the supernova in 2004 that blew in the galaxy. But nothing on the odd dust lane that looks like it could be a polar ring or some other interaction result. Besides the tilted ring that seems to go up and over the northwest end of the galaxy there\'s dust lane at the southeast that also isn\'t aligned with the galaxy. This one runs more east-west than the galaxy does and quickly is lost when it goes off the galaxy\'s illuminated portion. Two interactions in its past. I found nothing on either. If anyone wants to dig through the more than 100 papers that mention the galaxy and finds something on this please let me know. I\'m so short on time right now I can\'t spend as much time researching as I\'d like.

To the upper right is NGC 3674 a mostly featureless S0 galaxy. I thought I had it totally in the frame but see it extended further than NED indicated so I missed its northeastern ansae. Both galaxies were discovered by William Herschel but only 3683 is in either of the Astronomical League\'s observing programs. NGC 3683 was discovered first on March 18, 1790. NGC 3674 was discovered 3 years later on April 8, 1793.

Below NGC 3683 is a quasar labeled FSRQ. That stands for Flat-Spectrum Radio Quasar. These may be similar or even identical to BL-Lac objects. They aren\'t all that common, at least at NED.

A distant galaxy with a single drawn out arm lies to the west-southwest of NGC 3683. It is ASK 296263.0. Opposite the arm is a galaxy. Unfortunately, I found nothing on it. Could it be what created that odd arm or is it just a coincidence? Below and to the right of it is a strange blue galaxy, LEDA 2548235. It is made of two parts. The position at NED matches the gap between the two parts. Also, NED has two very different redshift distances for it. One puts it 150 million light-years away and one referred to in an essential note puts it at 700 million light-years. I used to think the main redshift they give is more likely correct but recently I found one that appears to be wrong and the essential note distance is right. In this case, flip a coin. I tend to favor the closer distance. I wish there was distance data for the blue galaxy to its west. It has much the same color and likely is related. No redshift is published for it that I found. But again, due to time issues, I didn\'t look beyond NED. If someone finds something on it please let me know.

The blue star obliterating the lower left corner of the image is SAO 28035 a Magnitude 6.3 A4 star. I had one heck of a time convincing it to let me see much of the image. When I framed the field excluding it, it sent in a horrid ghost image and blue ring. I finally found this position that got rid of those but I see that cost a bit of NGC 3674. Hipparcos puts it at a distance of 221 light-years. I guess I should be glad it isn\'t closer. 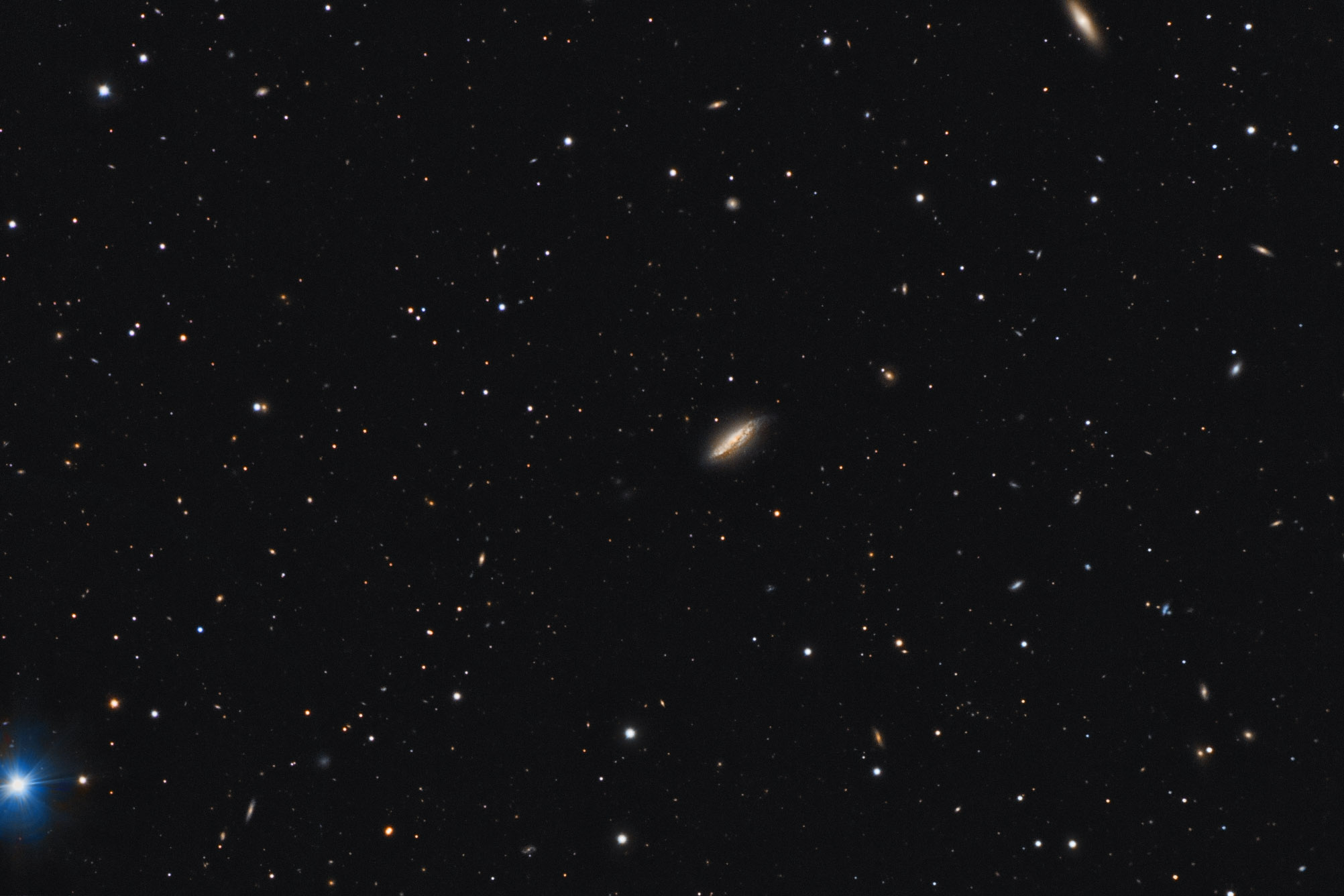 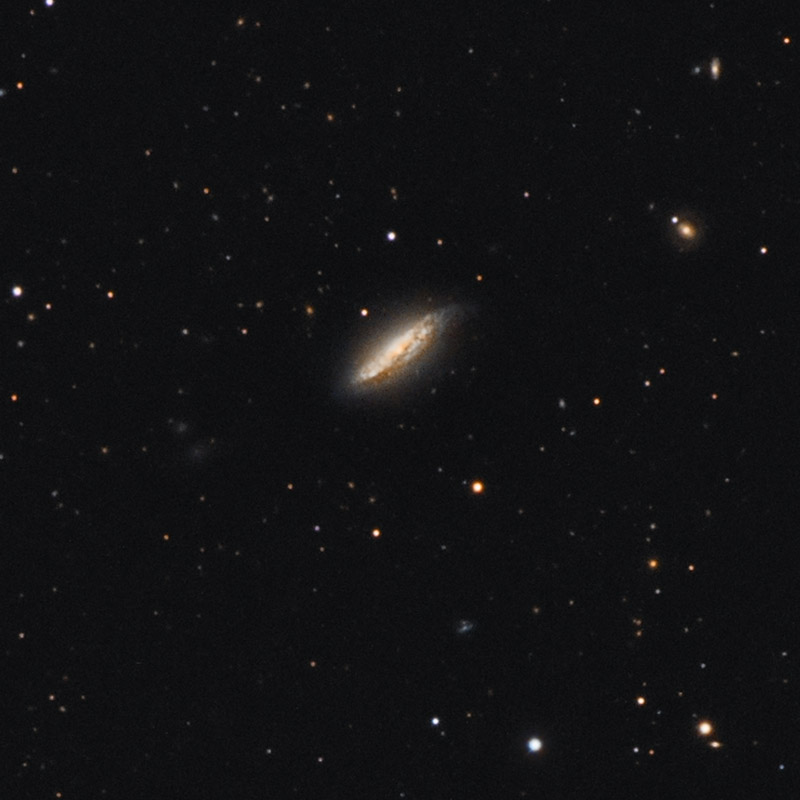 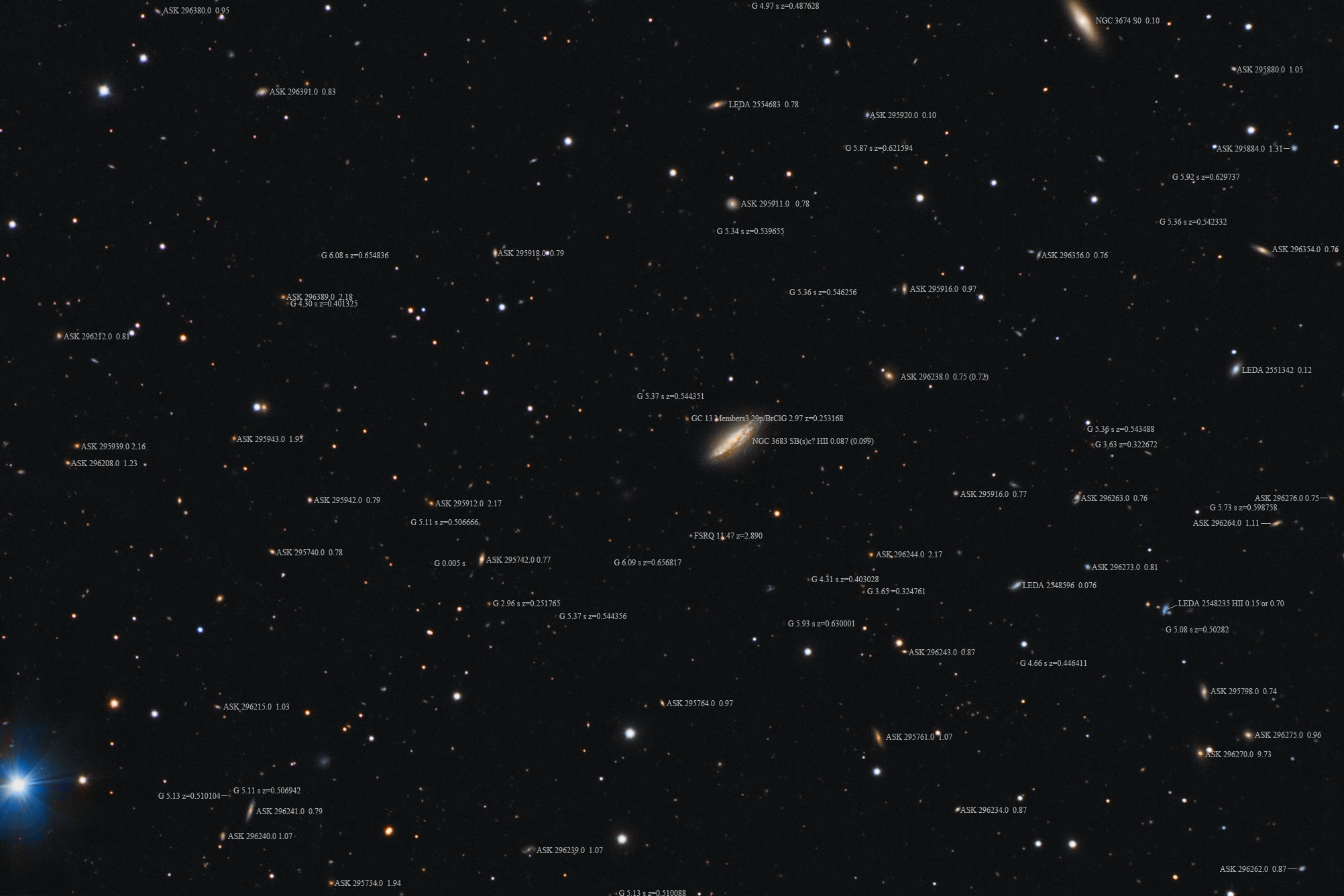