I like it when I can catch 2 objects on my to-do list in one image. They are in the hindquarters of Leo about 280 million light-years distant by both redshift and non-redshift measurements. Both are interesting. NGC 3816 appears to be the result of a merger or collision though I didn\'t find any papers suggesting this. The UGC does call it \"Slightly asymmetric\" and says \"spiral, disturbed?\" It\'s obviously highly disturbed with huge plumes. Including those plumes, it is over 300,000 light-years across. Even ignoring the plumes it is still some 175,000 light-years across. Note PGC 036349 to the east. It has a normally bright northern half but much of the southern half is exceedingly faint. Could it have interacted with NGC 3816? I came up empty trying to verify or deny this. NGC 3816 was discovered on May 9, 1864 by Heinrich d\'Arrest. It seems bright enough Herschel should have seen it but that didn\'t happen.

The other object on my to-do list was NGC 3821, an obvious ring galaxy which NED notes as having a RET nucleus. I had to look that one up. It stands for retired. Now I\'m retired but what\'s a retired nucleus? The term refers to galaxy cores that were starburst cores with starburst activity in the past and are now showing ionization as if still active but that is caused only by the ton of evolved low-mass stars created by this activity long ago. I may be retired but I don\'t have anything that could be called low-mass unfortunately. Thanks to the ring it is also a large spiral at 145,000 light-years in diameter. The galaxy was discovered by William Herschel on April 26, 1785.

When I went to frame the image, the sky reported another NGC galaxy nearby that would be in the field if I moved it a bit west which I did. It is a rather typical S0-: galaxy, NGC 3805. It is not as unusual as the other two but is also quite large as some S0 galaxies are. I can trace it out to at least 200,000 light-years across. Including the really faint outer reaches, it is likely somewhat larger if I\'d have given it more exposure time. It is slightly more distant by redshift than the first two being some 320 million light-years distant again this is both by redshift and non-redshift measurements. It was discovered by William Herschel on April 25, 1785 a day before seeing NGC 3821. Neither are in either of the Herschel 400 observing programs.

This field is on the northwestern edge of the Abell 1367 galaxy cluster which has a redshift distance of 315 million light-years according to NED. Thus these three and many others in the field are likely members of this large cluster about 3/4 of a degree away. My 2008 image of this cluster can be seen here: http://www.spacebanter.com/attachment.php?attachmentid=4630&stc=1

One rather interesting galaxy that\'s twice as distant as the Abell cluster is LEDA 1617816. It has unusually sharp edges, quite blue with two arms that look more like hands on a clock than spiral arms. They don\'t even come off at opposite angles as is usually the case. I was wondering how NED would classify it. I wasn\'t expecting R(K)3 as the classification. I think this is the rarely seen Yerkes classification scheme but usually, the middle letter is lower case, not upper case. What this means is the galaxy is rotationally symmetric (doesn\'t have an obvious spiral or elliptical structure). Has mostly K class stars in the core region and is somewhat tilted to our line of site (1 face on -- 7 edge on). There seems some disagreement if rotationally symmetric should be denoted with a \"D\" or with an \"R\". Sources vary on this but all would use lower case for the class of core stars seen. So maybe this isn\'t the correct interpretation. It\'s all I could come up with.

The night I took this was quite iffy. I started with blue expecting things to not be good enough for luminance. The blue was indeed weak but suddenly the sky cleared so I changed over to luminance but that soon went downhill with the last couple luminance frames being very weak. It then seemed to clear so I tried for green which went well. I thought red had too but when I went to process the data I find the second red image was lost entirely to clouds. I set to redo blue that was so week but the clouds that killed red only slightly parted so the blue redo was also very weak. Thus I ended up with 2 good luminance frames, two weak ones, 4 weak blue, two great green (least useful of the bunch) and only one red but that one was pretty good and had no satellites. Since I didn\'t notice this until I was processing it and it was too late to redo it I am going with what I was able to get. The result is a rather noisy image that still manages to show much of what I was after. 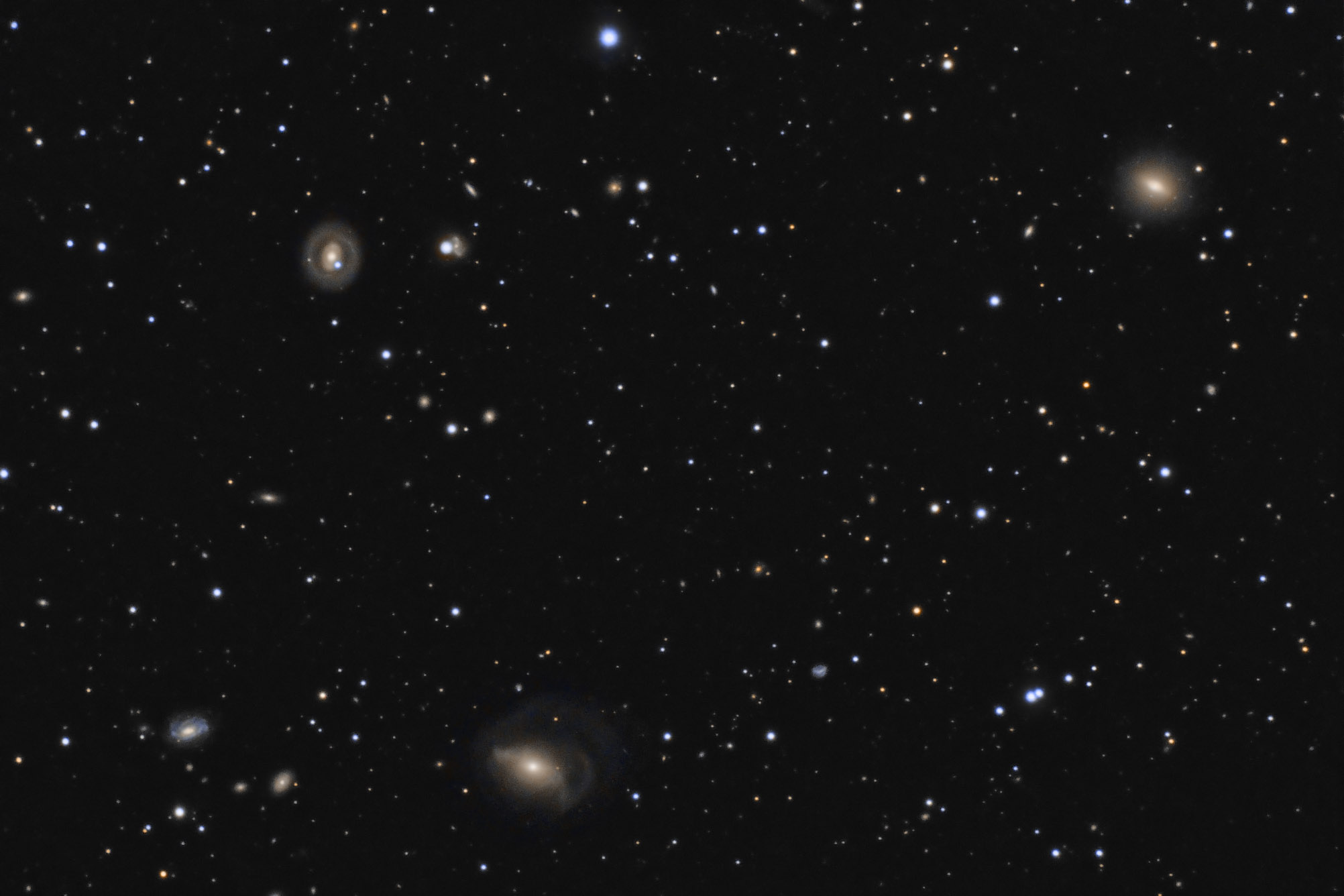 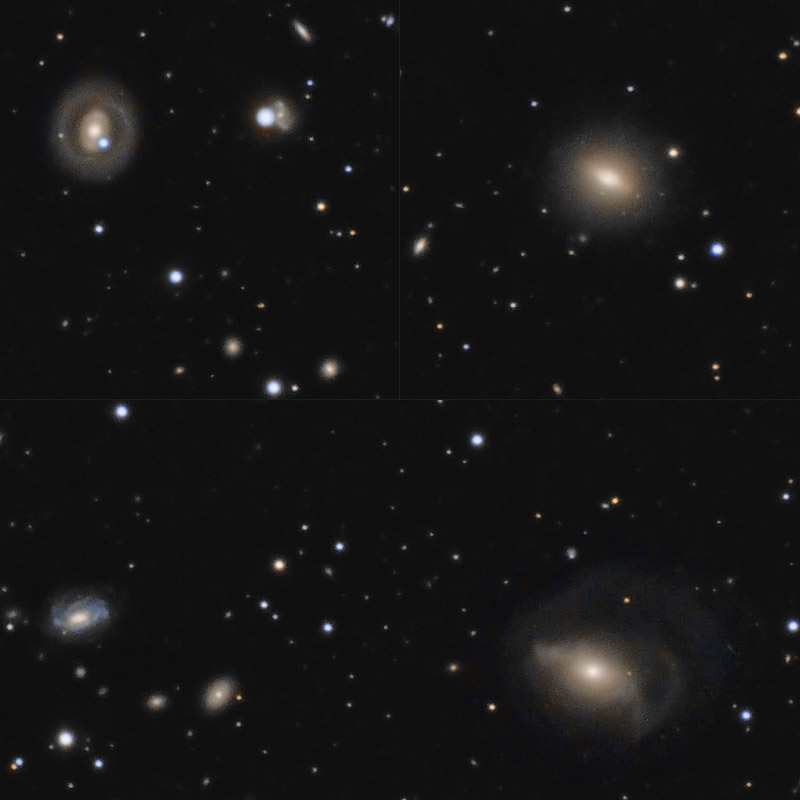 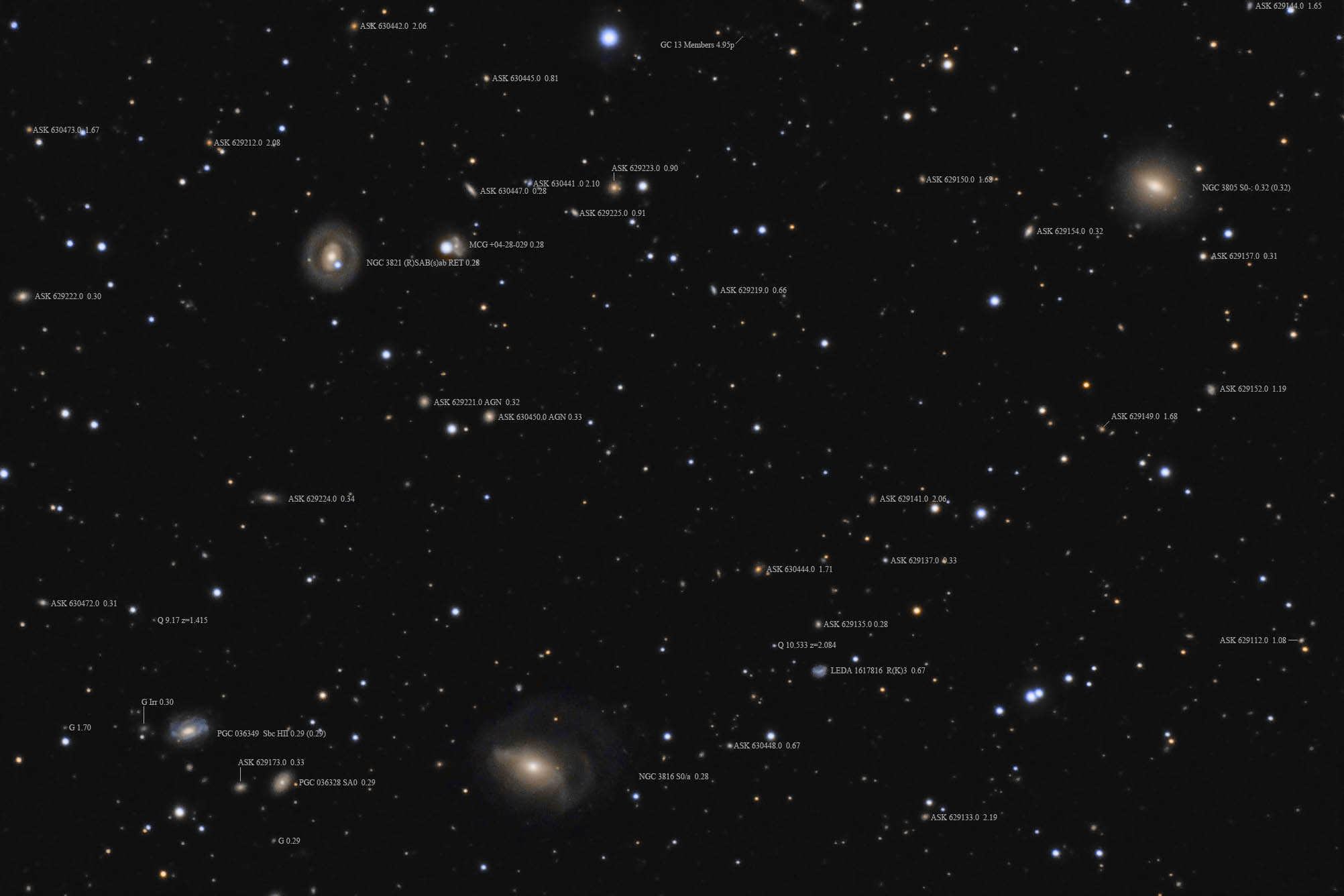