NGC 3877 is a near edge on Sc spiral galaxy in Ursae Majoris just south of Chi Ursae Majoris. That blankety-blank star cast nasty gradients across the image forcing me to do some heavy duty removal. I had moved the galaxy well north of the center and a bit to the side in an effort to reduce the issues but nothing I did could eliminate them.

NGC 3877 had a 12th magnitude type II supernova in 1998 that equaled the galaxy\'s total light output. William Herschel found this one on February 5, 1788. My main reason for imaging it is it is an original Herschel 400 object. While the Herschel 400 guide seemed to think it rather hard and starlike my comments from May 4, 1985 reads: \"Very good edge on with dust lane. Seems more interesting than its listed magnitude would indicate.\" I\'m not sure what I was seeing for a dust lane! Sure no sign of one in my image. I probably was seeing the dark lane giving the galaxy a weak black eye effect and not seeing but the central part of it rather than the full extent seen in my image. Now, where\'s a time machine so I can go back and ask myself about this? Both redshift and Tully Fisher measurements put the galaxy about 50 million light-years distant, very good agreement for a change.

It appears it might be a flocculent galaxy if it was seen face on as I see no real spiral structure but more disconnected short segments. They do make it a rather photogenic galaxy. A note at NED indicates it has many HII regions some quite bright. However, none show up in my image but for a faint hint of something at the north end below the centerline. It may be just a red field star, however. Even the Sloan image shows it may be a star. There is a bright blue star cluster southwest of the core that likely is full of HII emission if seen in H alpha light. Maybe that\'s the bright one the note mentions.

Transparency was poor when this was taken. That plus the glare from Chi Ursae Majoris reduced my limiting magnitude by a full magnitude from normal. Many things that would have shown up in the annotated image didn\'t come through the gunk. I did include two that just barely show in the TIFF version. I don\'t know if they barely survived the JPG lossy compression. You may need to up the brightness of the screen and enlarge the image to find these. Normally they\'d be easy at magnitude 21.3 but not under the sky this night, March 2, 2014. Still, the galaxy came through fairly well. 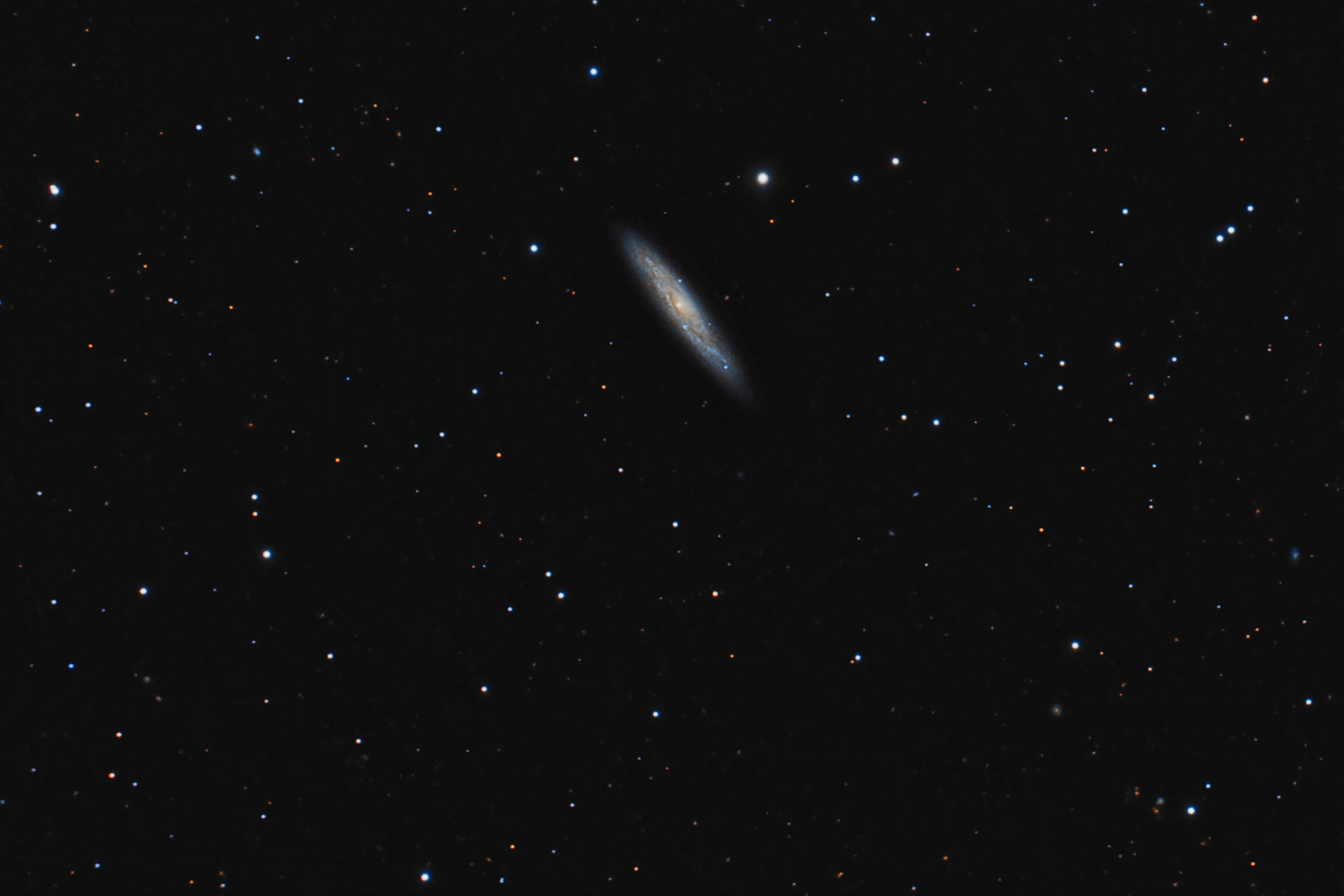 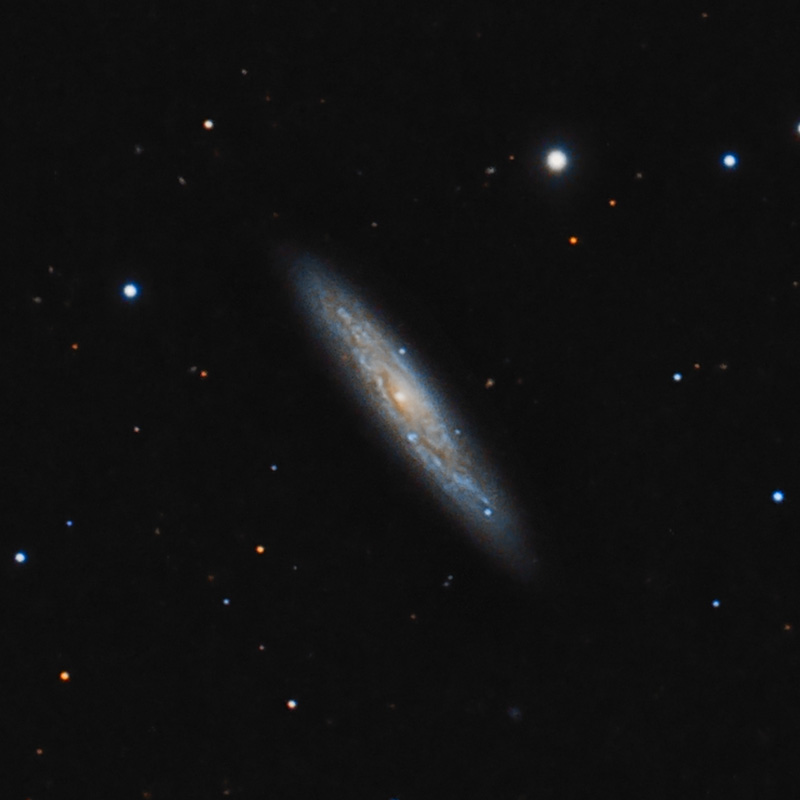 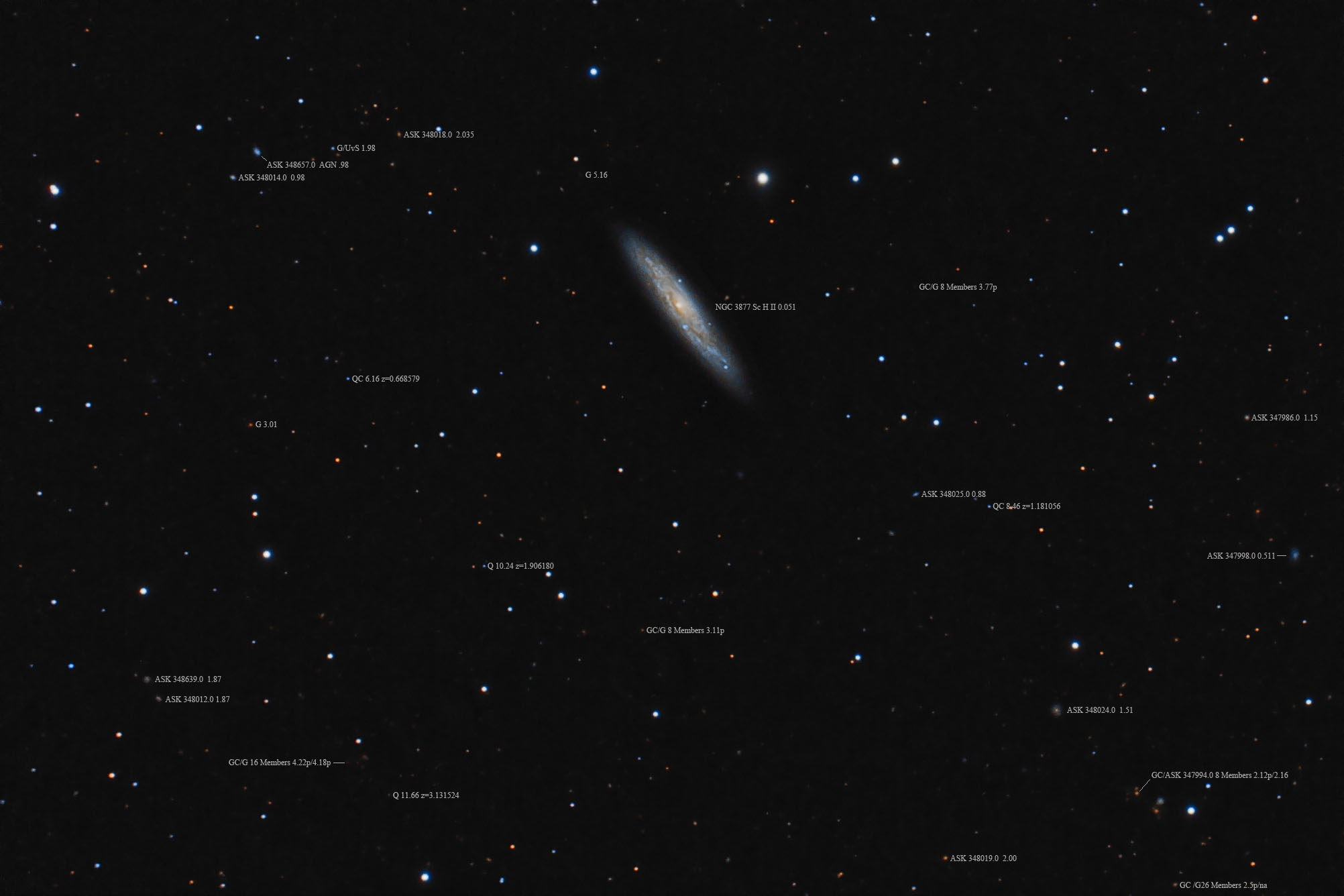