NGC 3884 is a huge ringed galaxy in northeastern Leo about 330 million light-years distant. It is likely a member of the Abell 1367 galaxy cluster. The cluster is centered about three quarters of a degree southwest of this field but is over 2 degrees in radius so easily extends to this region. It is listed at 315 million light-years distant. NGC 3884 is a somewhat red and dead galaxy, as are the other spirals that are likely cluster members. This is not uncommon in clusters where multiple mergers have driven much of the cool gas out of the galaxy and heated the rest to where it can\'t form stars. At a size of some 215,000 light-years, it appears NGC 3884 has had plenty of mergers. It was discovered by William Herschel on April 27, 1785 but is in neither of the H400 observing programs.

The field contains several large and somewhat bright galaxies I\'d have thought Herschel would have seen but apparently didn\'t. North of NGC 3884 is the double galaxy IC 732. The pair appear to be interacting. The northern galaxy seems to have a core that is not in the center but this may be more perspective and it may have a warped disk adding to this appearance. The pair, or maybe only the southern galaxy were (was) discovered by Guillaume Bigourdan on March 29, 1886. His coordinates point to the southern galaxy but his notes say: \"Extremely faint and diffuse, but its existence is certain; I can see brighter points in it which may be stars 13.4-13.5 (magnitude)\". Some say this indicates he saw both galaxies with the core of the northern one appearing star-like to him. Assuming the two are interacting and thus at the same distance from us the two span a distance of 134,000 light-years.

Near the right edge of my image is PGC 36609. I measure its size at nearly 150,000 light-years making it considerably larger than our Milky Way galaxy or even M31. NED classifies it as S0 which is odd as it has some nice spiral arms. I\'d say Sab rather than S0. The arms are faint but quite obvious.

The other large galaxy is PGC 36639 an S0/a galaxy by NED\'s classification. I\'d add to that saying it has an outer ring that should be noted in its classification. It too is much larger than either our galaxy or M31 at 140,000 light-years in diameter thanks to that faint outer ring.

The image contains three rather bright asteroids and four fainter ones. The brightest has no color trail while the two slightly fainter ones do. This is because two of the luminance frames were taken two nights before the rest of the frames including the other two luminance and all color frames. It was only in the frame that first night. All others were in the frame only the second night that did have color data. This also explains why the luminance trails are the same length as each color\'s trail. Clouds had moved in that first night and I had to shut down. Those first frames aren\'t all that great but again, due to clouds the second night I only took two more luminance frames planning on taking more after the color data but clouds had another idea. Typical of what little imaging I have been able to do this year.

But thanks to the Paramount\'s accuracy I combined the two nights luminance frames without needing any alignment! Since dither doesn\'t help much with only 4 frames they were not dithered making this possible. Now if the sky would work as well it would make this old geezer really happy. 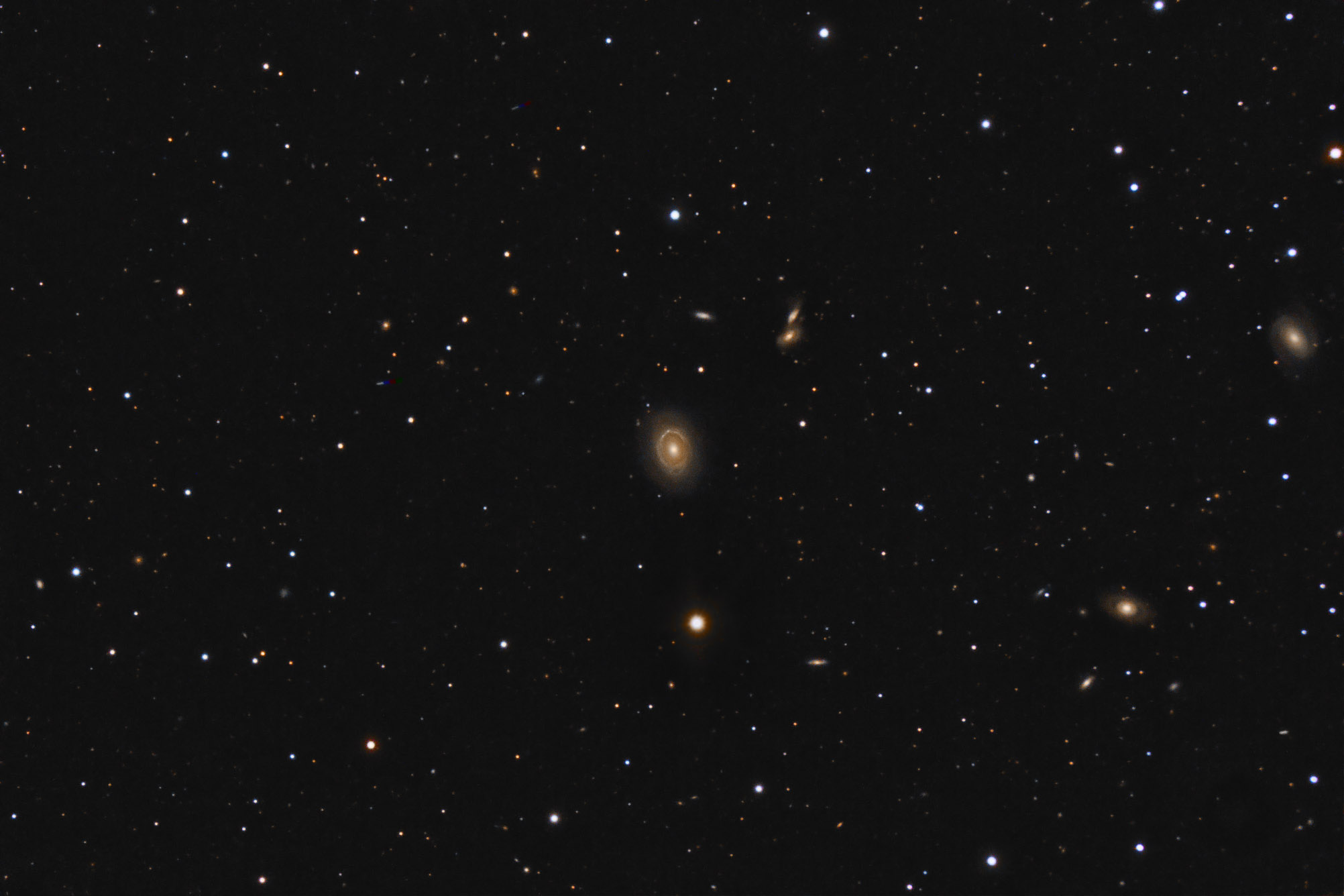 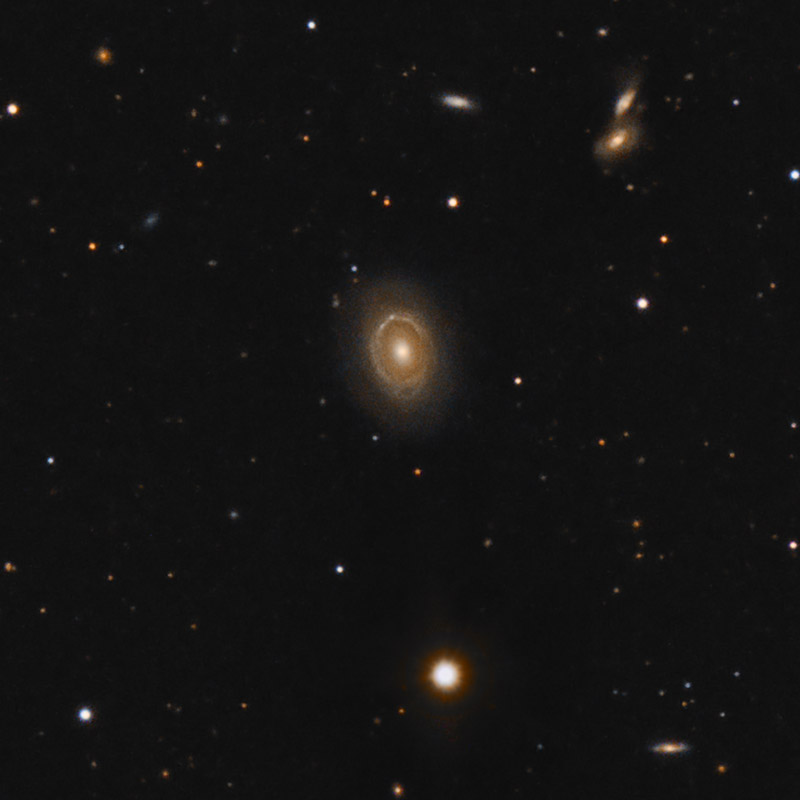 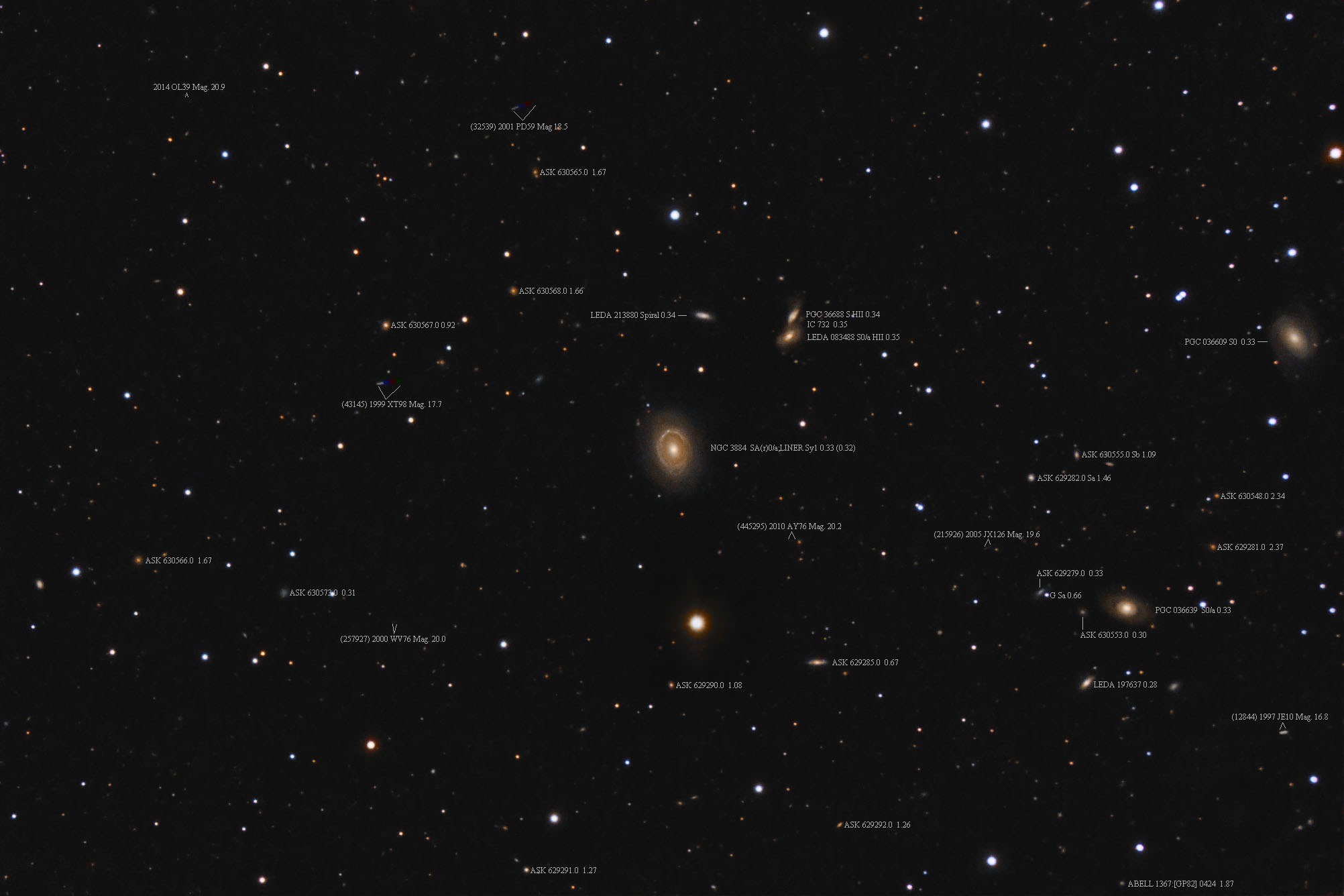