NGC 3906 s an SB(s)d spiral about 54 million light-years distant in Ursa Major about 5 degrees south of far more famous M109. The UGC describes it as: \"Eccentric bar. A large number of thin arms.\" I agree about the eccentric bar but the \"thin arms\" comment doesn\'t fit any image I\'ve seen of this galaxy. I also have trouble with it being a d galaxy. That means widely separated arms of which I saw none. Just a disk full of star clusters. The NGC Project simply says SB... for a classification. That makes more sense to me. There is a blue star-like object at the eastern (left) end of the bar the NED considers part of the galaxy though some sources say it is a blue star in our galaxy. I tend to agree it is just a star. The disk of the galaxy is very off center from the bar. This makes it a sloshed galaxy but I found no mention of this odd fact.

The galaxy was discovered by William Herschel on March 9, 1788. Being rather faint it didn\'t make either of the Herschel 400 observing programs.

It appears to have one companion in the northeastern part of my frame. A rather featureless oval blue blob of a galaxy with little information on it at NED. It\'s rather hard to classify a blue blob so apparently, that hasn\'t been attempted. Most catalogs ignore it though it did make the 2MASS and ASK general catalogs.

In preparing the annotated image I came across a bright red star that wasn\'t there. At first, I thought it might be a new nova. Looking at the POSS plates the star didn\'t exist. When I checked the Sloan image it was there after all but in the wrong place. I then found a star on the POSS plates not on my image nor Sloan\'s. Checking that position in SIMBAD I found it was LHS 316, a high proper motion star. It is moving nearly 2\" of arc per year. Since the POSS plates are 50 years old it had moved some 1.5 minutes of arc. No wonder I was confused. Fortunately, the Sloan image was recent and it hadn\'t moved far though was on the \"wrong\" side of the white star below it. The star is M4.5V so is a red dwarf. Finding it on surveys I find it is some 26 light-years distant so a rather nearby star. Its magnitude is 15.1 in blue light, 13.26 in V (rather close to visual) and 12.3 in red light. It gets far brighter in IR. Since the Sloan image included 3 IR bands it was blood red in their image. I\'ve been making an annual movie of Barnard\'s star moving through the heavens. Do I now add this one to the list? It is moving only 20% the speed, however. A snail compared to Barnard\'s star.

Why all but one of the annotated galaxies are east of NGC 3906 I don\'t know. 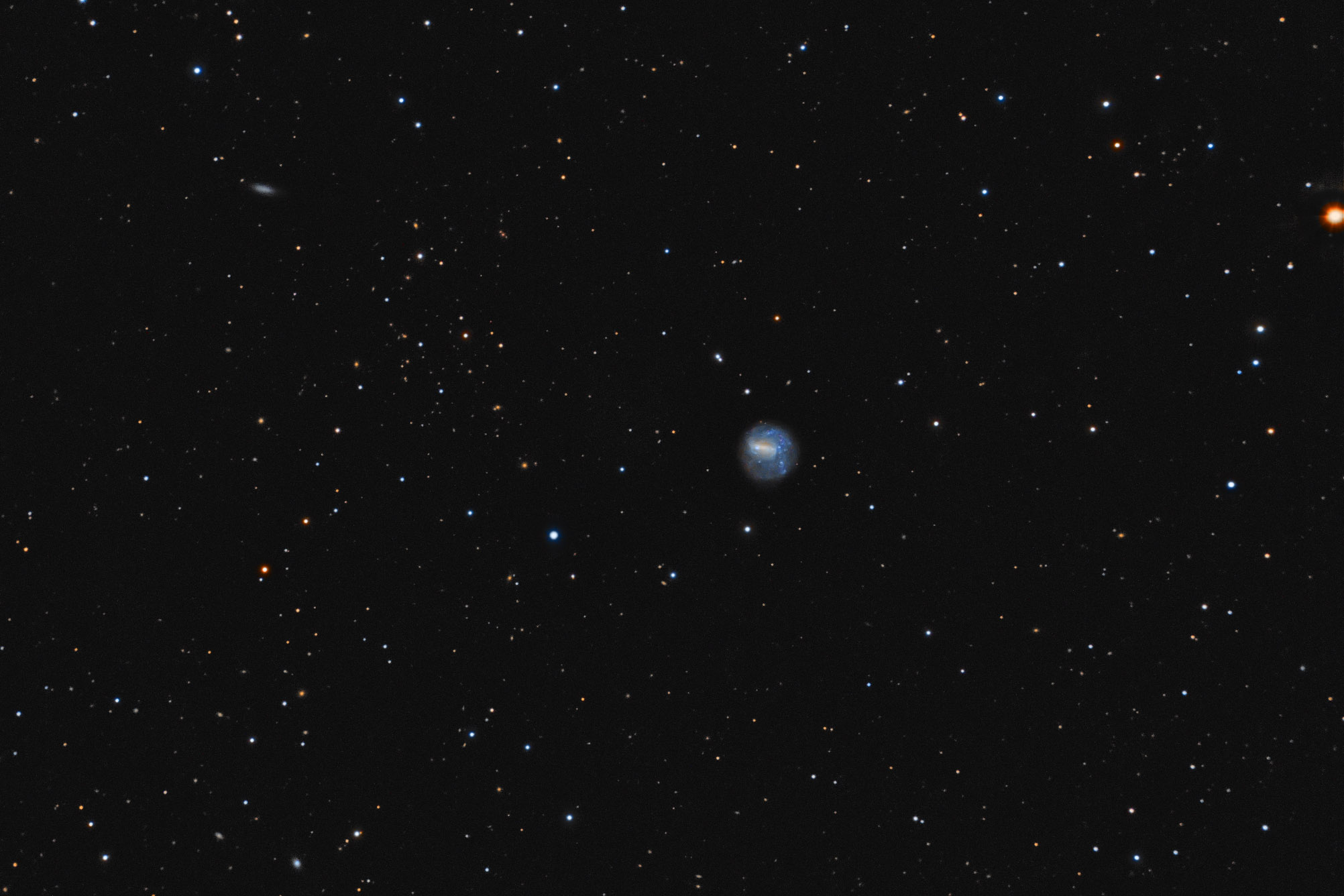 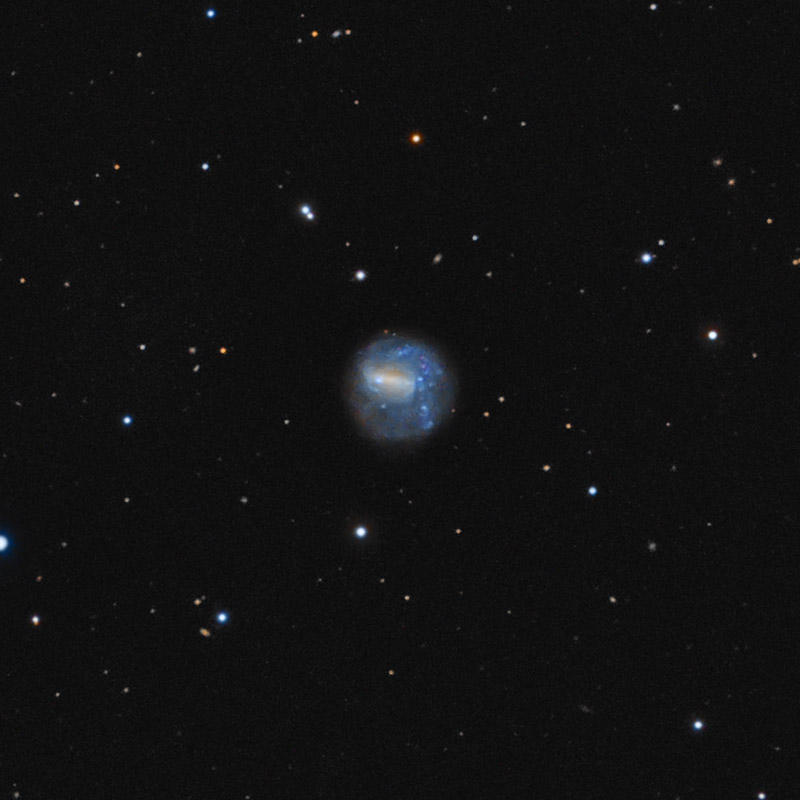 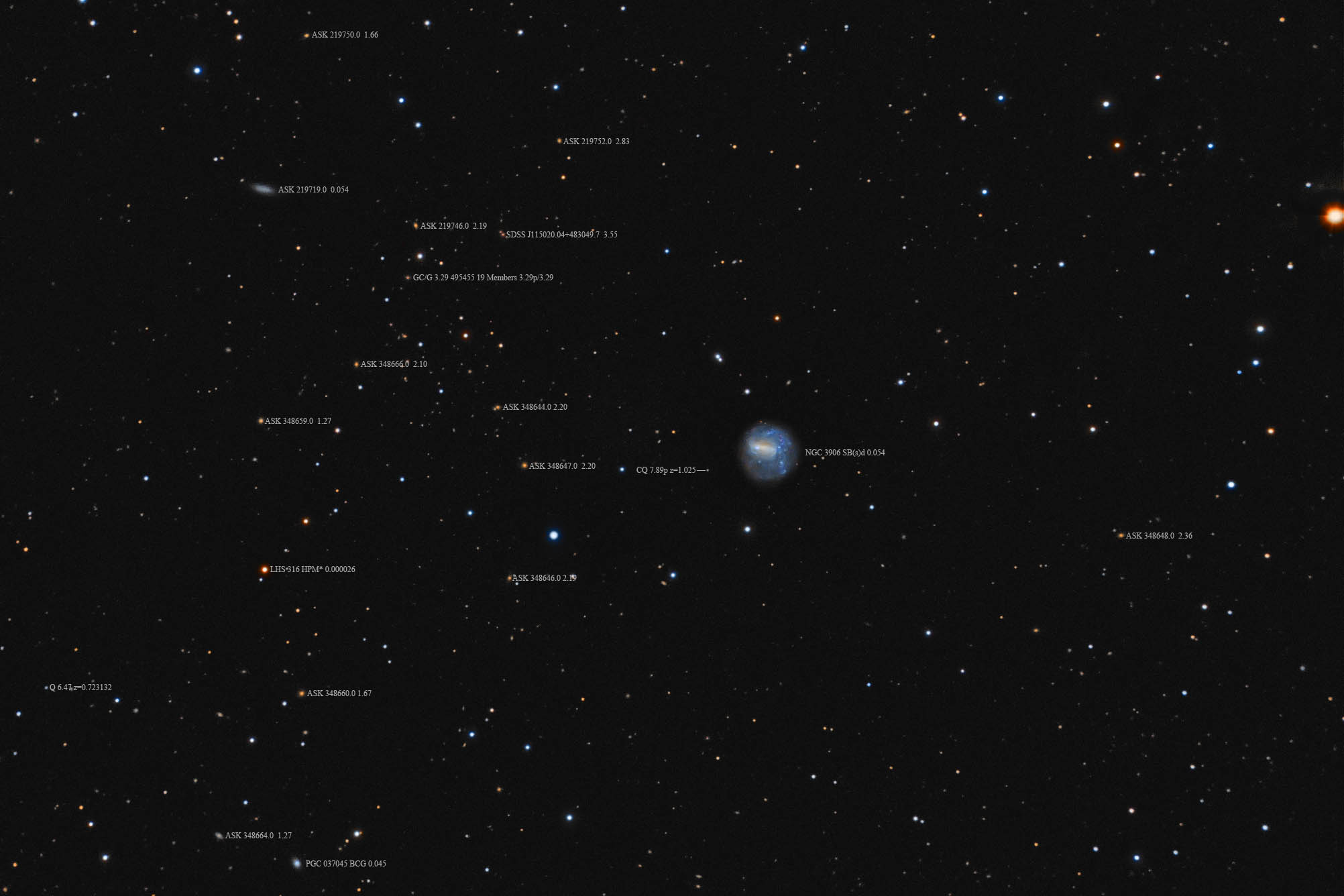