FGC 1315/UGC 06802 is a flat galaxy in Ursa Major two degrees below Phecda, the southwestern star in the bowl of the Big Dipper. While I\'m fascinated by flat galaxies like this one, NGC 3917 is a nice flocculent spiral, a type with many arm segments rather than the full arms of a grand design spiral. So this was a double for me. I centered on the flocculent spiral since it was the more photogenic of the two. By redshift, FGC 1315 is 67 million light-years distant while NGC 3917 is closer at 53 million light-years. Both are further away by Tully Fisher measurements, 74 and 57 million light-years respectively. Either way, they are apparently more than 10 million light-years apart so not related, just in the same line of sight as seen from our galaxy. There are quite a few galaxies scattered around the field. Assuming their redshift distance is correct, FGC 1315 has a diameter of about 45,000 light-years while NGC 3917 is much larger at 75,000 light-years. It is not seen edge on so its flatness can\'t be determined very well, but appears to me to also have a very small central bulge. In fact, it did make the 2 micron flat galaxy catalog as 2MFGC 09297. This catalog has less strict standards for flatness.

The annotated image gives the details. Only one quasar is in the image. While a couple of very small galaxies look like short asteroid trails they are just other, likely very distant, edge on galaxies that might have made the Flat Galaxy Catalog if closer so their flatness could be measured. The bulge must be no more than 1/7th the galaxies length to make the catalog.

Lots of red galaxies can be seen in the lower right corner of my image. They are likely members of the galaxy Cluster ABELL 1387, whose center is out of my field of view. It is listed as having 50 to 79 galaxies in a cluster that is 28 minutes of arc across. That\'s more than the height of my image frame. It is class III which means it has no obvious center with no condensation toward the center. Its distance is listed at about 1.68 billion light-years which is a good fit for the redshift of the few galaxies in the corner of my image with redshift data.

LEDA 2399182 is a very blue compact galaxy between NGC 3917 and the ABELL cluster. Seen on the Sloan Survey image it appears it could be a double core galaxy. Or possibly two very blue round galaxies seen nearly atop one another. At a distance of only 67 million light-years, they are very small with the diameter of the object being only about 4,000 light-years. If two each is likely about 3,000 light-years across. Compact indeed.

This one was taken on about the best night I had last November but winds were running over 40 mph that night. I can work up to about 30 mph but at 40 there\'s some elongation of the stars. Though oddly it isn\'t even across the field with sometimes stars right near each other showing different elongation. I am still scratching my head over how that can be. When I get high winds seeing is usually poor. Another oddity is that it was about average this night. 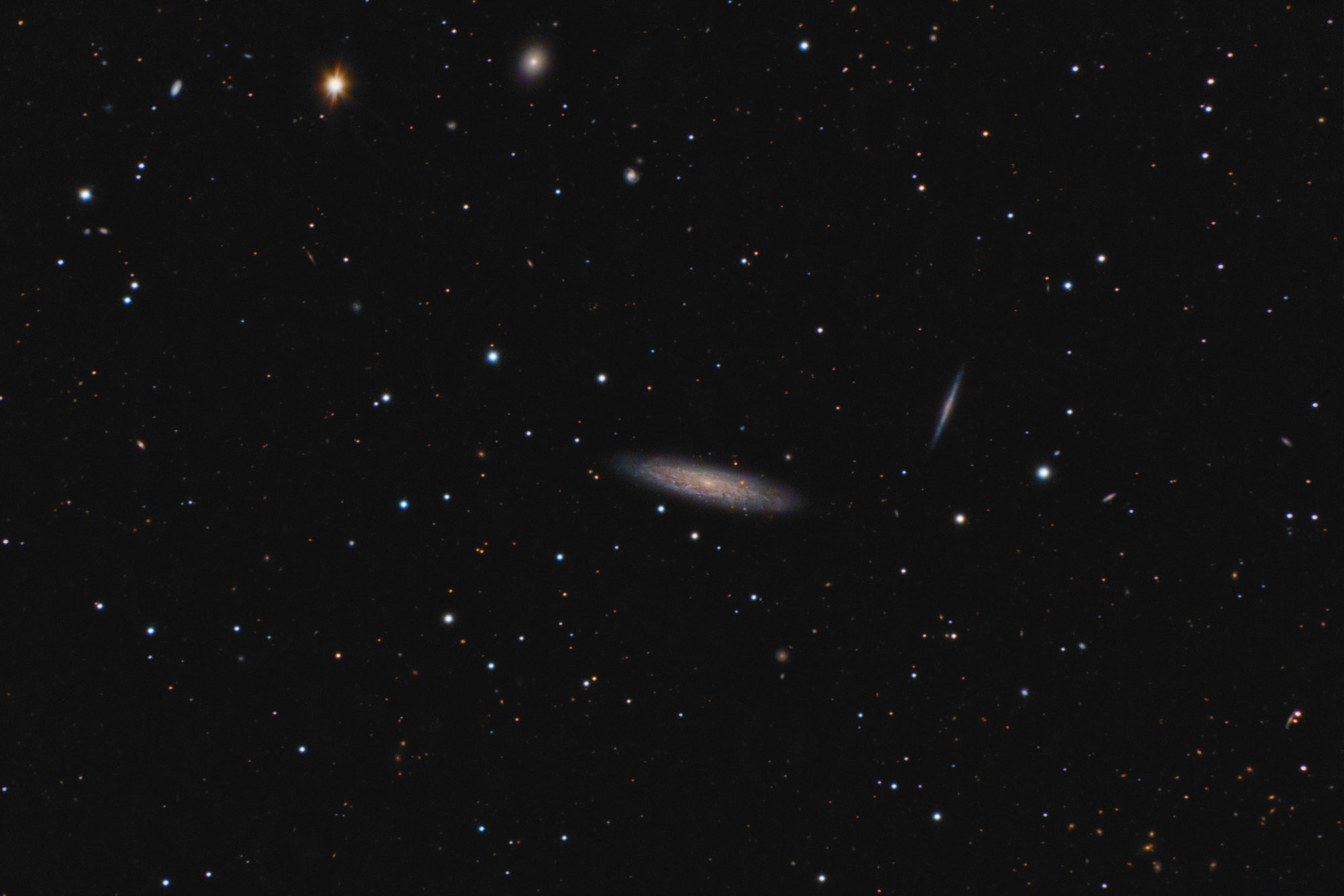 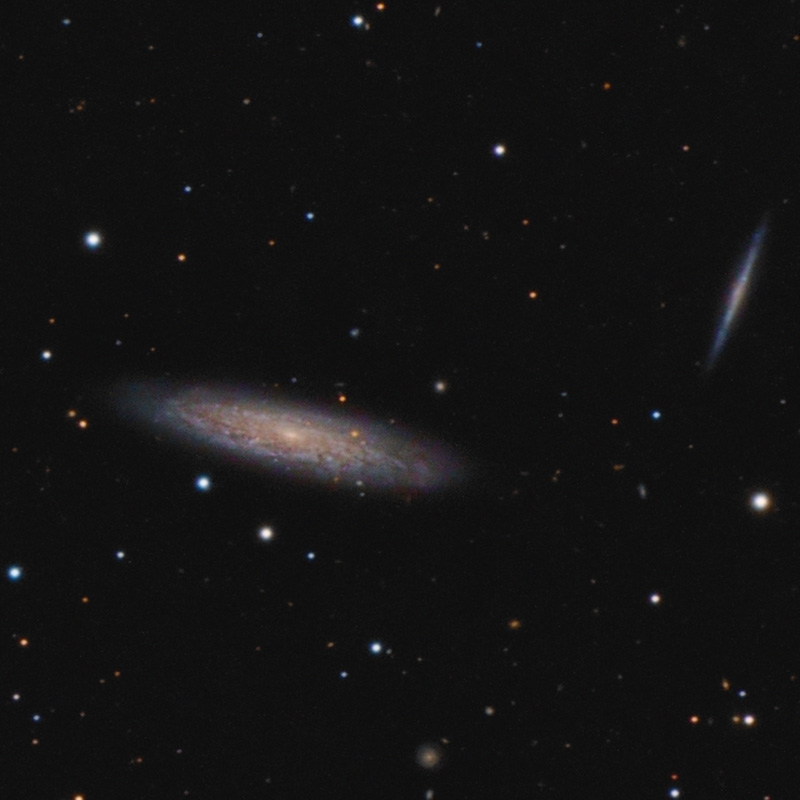 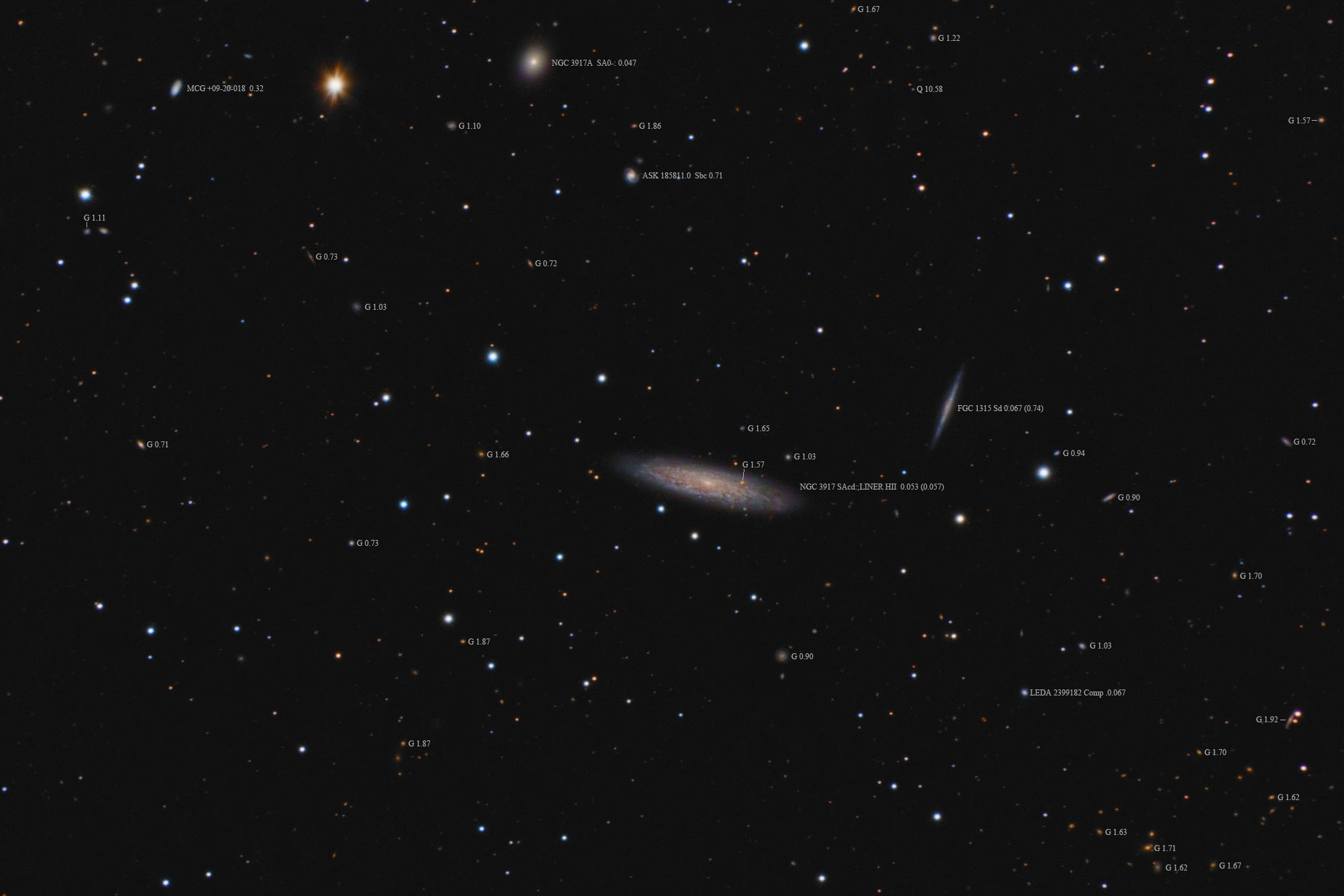