NGC 3997 is a galaxy that\'s part of a large group that goes by many names. The NGC Project uses the name NGC 4007 Group which has its own baggage I\'ll get to later. The group is located in Leo just over the border with Coma Berenices and lies some 220 million light-years away.

NGC 3997 is a rather confusing galaxy. Its structure is very disjointed with plumes everywhere. One arm appears could be considered a separate galaxy if the rest of NGC 3997 is masked out. The annotated image hints at the confusion. The main core is listed as NGC 3997 but only .24 arc seconds away is NGC 3997 NED01. Since it is only a quarter of a pixel away I didn\'t note it. Nor could I see anything on the Sloan image. Yet NGC 3997 is listed at magnitude 14.02 and 1.7 by 0.6 minutes while NED 01 is 1.63 by 1.23 minutes at magnitude 15 and listed as I pec. To me, this fits the area better than does the description of NGC 3997.

If that wasn\'t confusing enough between the odd arm that could be taken for an edge on disk galaxy and the core is where NED puts NGC 3997 NED02. I see nothing at that position yet NED sees a galaxy measuring 1.97 by 0.67 minutes. Just the size of that odd feature that could be taken for an edge on galaxy. Just the position is wrong. Then I noticed NED gives the error circle as 5\". That is sufficient to just include it. The annotated image points to the center of the error circle but I do think they mean that object that appears to be an edge on galaxy. No redshift is given, however. It is classed as simply pec for peculiar. NGC 3997 itself is listed as SBb pec. Also at about its position, well 9\" away, is 2MASXI J1157489+251615, an IR galaxy. It is listed as .9 by .4 minutes and magnitude 18.1. The position is closer to the apparent edge on galaxy (arm) than the core but not exactly. Yet it shows only a 0.5\" error circle, the minimum NED normally uses. I didn\'t put it on the annotated image as things were getting a bit crowded. Go up two pixels from the end of the NED02 line and left 2 pixels for its position. The 2MASS catalog calls it a low surface brightness galaxy. Another piece that looks like it could be a separate galaxy is the blue object under the core. NED shows nothing at or around its position but for the objects already mentioned. After this, my head was spinning and I didn\'t dig deeper. I probably should have. In any case, NGC 3997 looks to me to be the result of a likely merger with another galaxy or a merger in progress with all its disjointed arms and plumes. It was discovered by John Herschel on February 23, 1832.

Now for some of the other NGC galaxies in the field. At least they aren\'t all confusing but there are issues with some of them as well. So hang on for a sometimes bumpy ride.

NGC 3987 is a classic edge on spiral classed as Sb by all at magnitude 13.9. But note the bright, star-like object in the dust lane right of its core. This is LEDA 4547376. But suddenly this nice simple picture gets bumpy because NED says this star-like object is really 1.44 by 0.32 minutes in size at magnitude 16. I can\'t see this in the Sloan image however. I just see a small round object. It was discovered by William Herschel on April 6, 1785. It\'s not in either H400 program.

NGC 4005/NGC 4007 is one of those NGC galaxies with multiple numbers. It is classed as S?, Sb and S.. and shines at magnitude 13.9. As to the two numbers the NGC Project has this to say. \"N4007 was discovered by WH (III 325) but was reduced incorrectly and the North Polar Distance in GC and NGC is two degrees too far south (the offset is 45\' south of 4 Comae). This error was caught and corrected by Dreyer in Scientific Papers of William Herschel. Struve and Rosse (object Alpha on the sketch of the cluster) later rediscovered it, so it received the second NGC number N4005, this time at the correct place.

\"All major catalogs identify this galaxy as N4005 although you could argue that by prior discovery, III 325 = N4007 should take historical precedence. In any case, it is clear that N4005 = N4007. Unfortunately, because of the two degree error, the NGC position falls close to N4003. So, Reinmuth (Die Herschel-Nebel), Carlson\'s NGC/IC Correction list, CGCG, UGC, MCG all equate N4007 with N4003 ignoring Dreyer\'s correction. See Catalogue Corrections, Malcolm Thomson and NGCBUGS. - by Steve Gottlieb\" It too is a William Herschel discovery on April 6, 1785. It\'s not in either H400 program.

NGC 4015 is a double galaxy. NED01 is a nice elliptical (rare in this group) of magnitude 13.8 while its companion with nearly the same redshift is a near edge on classed S? and shines at magnitude 12.81. There is a dark dust cloud seen over the elliptical. Since dust is exceedingly rare in such galaxies could it come from the edge on companion? Or is the alignment with that galaxy just a coincidence? It was found by John Dreyer on April 26, 1878.

NGC 4018 is another near edge on galaxy. They seem unusually common in this group! It is listed as being Sab by all sources I checked and is magnitude 14.7. We end the NGC list with one everyone agrees about. Sure wish that was the rule rather than the exception with this bunch! It too was found by John Dreyer on April 26, 1878. Note this is the John Dreyer that compiled what became the NGC and IC catalogs.

I\'ve indicated other members of the group by name in the annotated image. If I thought their angular size indicated they were a member but no redshift data was available to confirm this I listed the name followed by a question mark.

While many galaxy clusters were listed for the field only two could be marked with an obvious core galaxy. One is southeast of the center of my image. It is MaxBCG J179.54663+25.05842. Its core galaxy is very obvious with some detail in my image. Its distance is only 1.8 billion light-years and contains 15 members in an unspecified radius. The BCG is also listed in the 2MASS catalog of IR sources so may still be feeding. At least it is full of dust being heated by unseen newly minted stars. The other cluster is on the far western edge of my image. It is GMBCG J179.11209+25.16277. It is listed as having 11 members. It BCG also is in the 2Mass catalog as an IR source. In the case of the first cluster, there was no redshift value for the BCG. For this cluster there is but it differs from that of the cluster itself. The cluster is listed at 3.4 billion light-years and the galaxy at 3.2 billion light-years. The galaxy\'s redshift is by spectroscopic measurement while the cluster is photographic. So I expect the 3.2 billion light-year figure is the one to use here.

The NGC 4005/7 group extends well beyond my field of view. Those with wider fields will pick up far more than I have so this is a good group target for small systems. I\'d like to see what you get. Under dark skies, it should be quite spectacular. 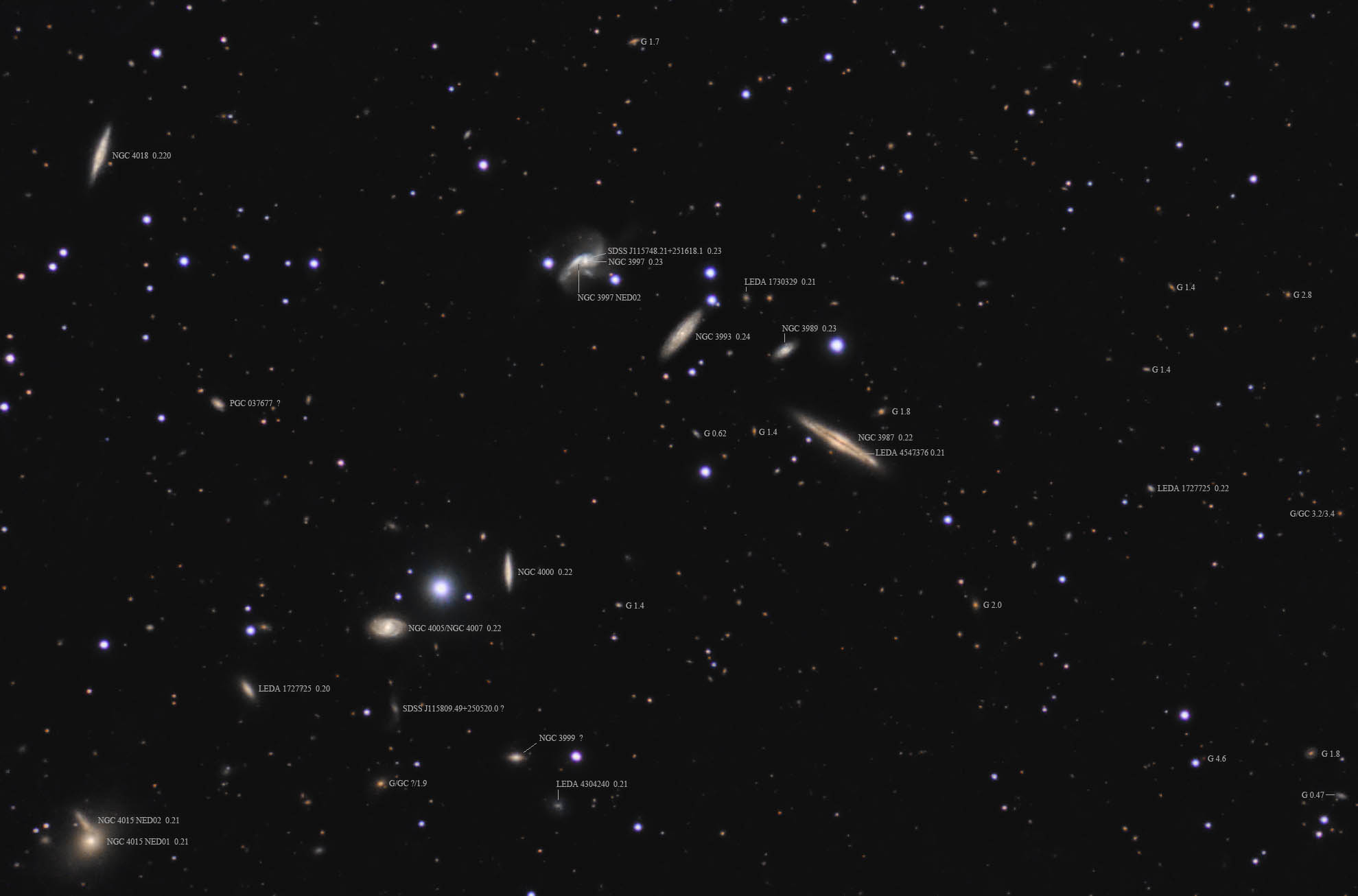 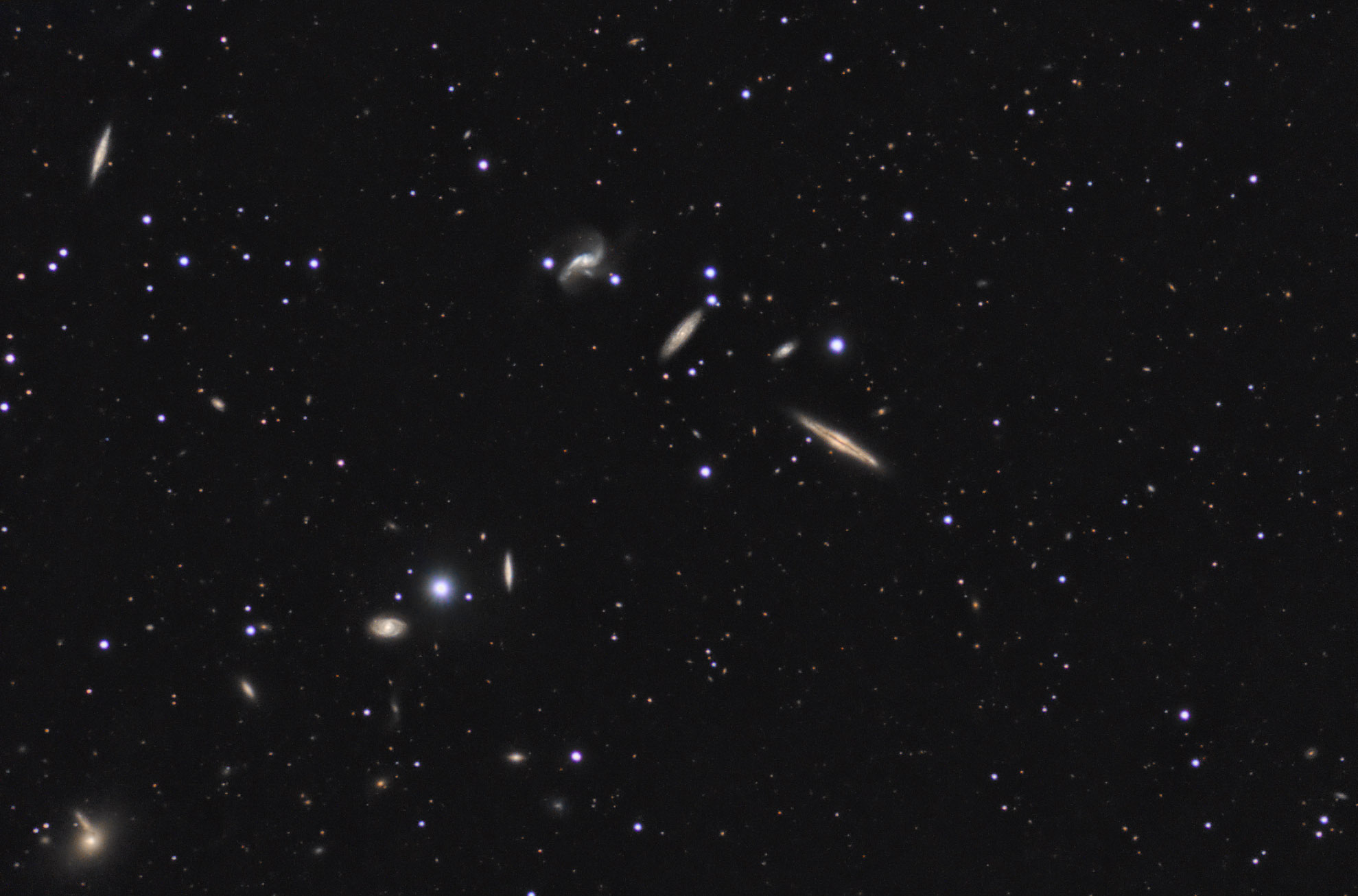