This field attracted me as a study in the contrast between a high surface brightness galaxy and a very low surface brightness galaxy. Both are about 50 million light-years distant and are found in Ursa Major about a degree northwest of more famous Arp 18 (NGC 4088). They are considered members of the M109 galaxy group. NGC 4026 is an edge on S0 galaxy. Note that the intensity of the disk drops away from the core then brightens again before fading normally. This bright region may indicate a ring if seen face on. Is the ring due to dust hiding the inner parts of the disk or just a higher star population? Papers I saw disagree. A radio-based paper said it found no dust. Visual observations find dust. Maybe it is both. Certainly, I can\'t answer this from my image. Interestingly, older papers see this one as a hidden Sa spiral but newer ones all say S0. HI radio observations show an HI tail heading south from the galaxy. Its cause seems unknown as far as I could find. Did nearby DDO 102 have anything do do with this? I rather doubt it as its mass seems quite low but it may be dense with unseen dark matter and thus be able to cause a plume in NGC 4026. Some very low surface brightness galaxies have a lot more dark matter than their brightness would indicate though most don\'t seem to have enough to cause this plume. At least not to my way of thinking. Also, it doesn\'t point to DDO 102. It may be due to something it ate long ago. I found no paper trying to explain it, I\'m just reporting it exists.

NGC 4026 was discovered by William Herschel on April 12, 1789. It is in the original H400 program. My notes from that on April 27, 1984 with my a 12.5\" f/5 at 150x under excellent conditions reads \"Starlike nucleus in what looks to be an edge on but is classed E8-S0 in Burnham\'s. No dust lane seen which agrees with the latter classification. Seems 12th magnitude or a bit brighter.\" A paper was written since my observation rule out it being an elliptical galaxy. I don\'t see that starlike nucleus mentioned in my notes but assume that has to do with the stretch I used to bring out DDO 102.

The low surface brightness galaxy is DDO 102 in the David Dunham Observatory\'s catalog of low surface brightness spiral galaxies. it is also known as UGC 6956 and PGC 37682 among other designations. The core is rather faint and its arms very faint. Unfortunately, I wasn\'t able to find much on it or why it is so low luminosity. I assume star formation is weak yet the arms are surprising blue compared to the central bar region. I see no real core just the bar with some star clouds in it. The arm structure is ill-defined. This may be due to it being barely above my noise level. I couldn\'t find any deep images of this that showed any more than my image.

After constant complaining about how bad the nights have been this one was taken on a better than average night, at least better than I\'ve had in some time. The annotated image shows a galaxy near the top NED lists at magnitude 22.9. It\'s barely visible. Still, this and the seeing is well above the norm for the last few years. While taken the same night as IC 320 and NGC 0644 conditions went bad after NGC 644 then cleared with much better seeing and transparency for this image near dawn. I\'d have taken more data but dawn ended the night and the following nights were much worse. I did take two extra blue frames due to the faint arms of DDO 102 but in dawn skies. While I used them I don\'t think they helped significantly. 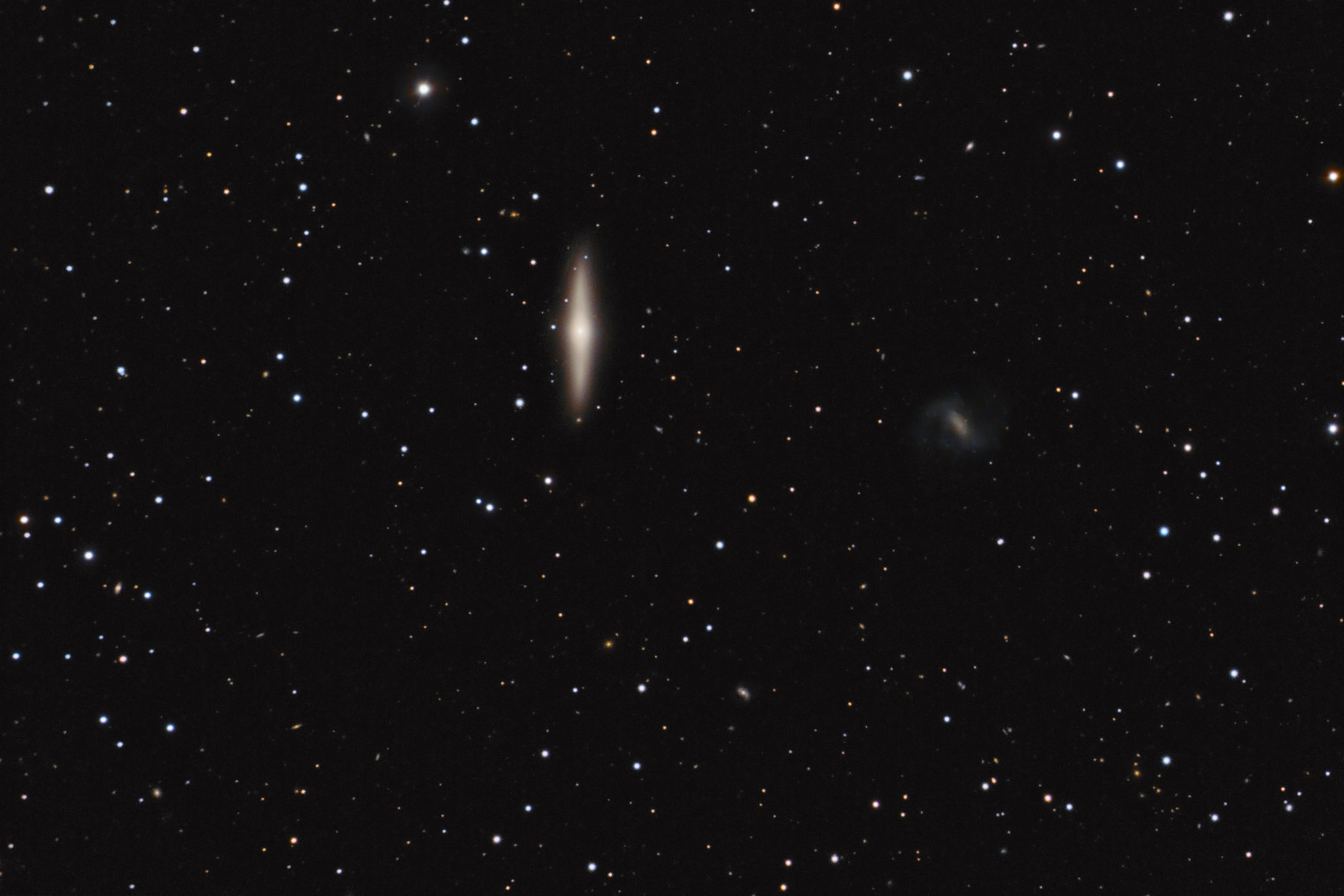 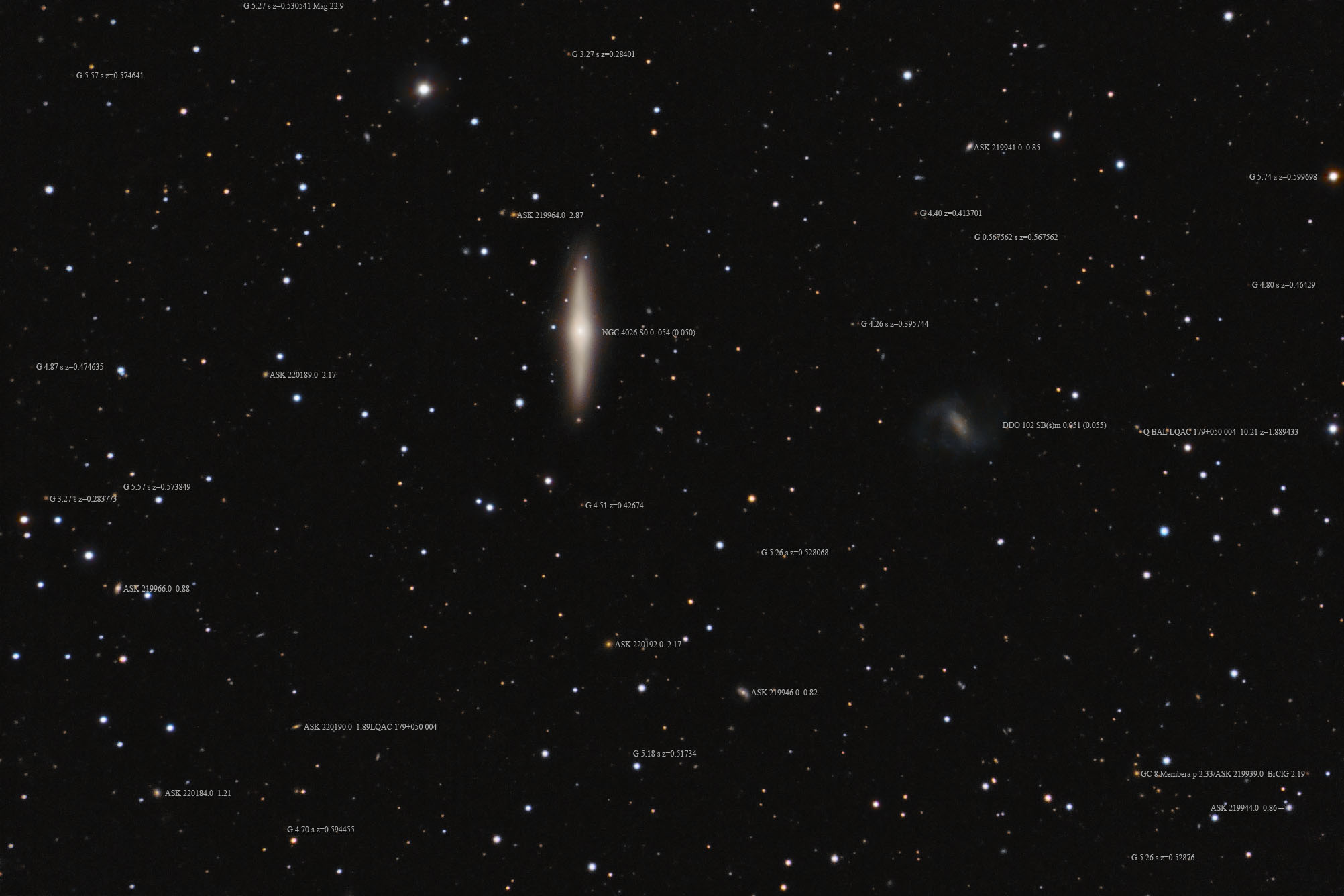