NGC 4068 is an irregular starburst galaxy in Ursa Major. It is thought to be at the end of its starburst phase. NED classes it as IrrAm while the NGC project just says Irr. Redshift says it is about 18 million light-years away but other measurements put it closer with 13 to 14 million light-years being the currently accepted figure that I was able to find. I\'ve shown both on the annotated image. The HST took an image of part of it as part of a three galaxy series of dwarf irregular starburst galaxies; NGC 4068, NGC 4163 and IC 4662. I\'ve imaged the first two. The IC galaxy is only visible from southern skies so always far below my horizon. The HST article is at: http://hubblesite.org/newscenter/archive/releases/2009/19/ Only part of the galaxy fits its limited field of view. You can read all about it at that site which saves me a lot of typing.

Below and left of NGC 4068 is SDSS J120431.81+522749.0. It is listed in the 2MASS catalog of IR sources. It looks rather peculiar. All NED says about it is that it has an AGN at its core. While this doesn\'t necessarily mean it is the result of interaction it appears that it is a likely merger candidate with the very odd arm structure and plumes. The northern plume is rather bright but the southern needed a lot more time to bring out as it is just visible in my image. I\'d love to see what Hubble would see looking at this one. At over a billion light-years it is a rather big galaxy. From the end to end of the plumes it is about 70 arc seconds in size. At its distance of 1.089 billion light-years that would be a diameter of 370,000 light-years! It appears to be somewhat tilted to our line of sight.

South of NGC 4068 is the galaxy cluster GMBCG J180.99631+52.47507 which contains only 8 members in an unknown area according to NED. Its position is also that of the Bright Cluster Galaxy (BCG) that anchors the cluster.

Further south is the core of Abell 1457. NED lists it as a galaxy cluster of richness class 0 and a distance of 840 million light-years. Richness class 0 means 30 to 49 galaxies. No diameter is given for the cluster. Galaxies of this distance are scattered across the image so apparently, it is quite large considering the core is near the south edge of the image. I centered the label over the listed center of the cluster.

To the west (right) of NGC 4068 is the galaxy cluster GMBCG J180.73018+52.62528 at 4.2 billion light-years. It\'s BCG has the same position. The cluster is listed as having 13 members. Again, no size is listed. In this case, I do see what appears to be several members in the area. I had to put the label to the left so as not hide some possible faint members.

The galaxy cluster in the bottom left corner is GMBCG J181.46298+52.46936 at 3.1 billion light-years. In this case, the BCG has the same position and nearly but not exactly the same redshift. The difference is in the next decimal point and insignificant compared to measurement errors but I do find it odd when they differ.

Even closer to the southeast corner is WHL J120559.1+522915 at 3.2 billion light-years. While there appears to be a BCG at the exact coordinates of the cluster it isn\'t listed in NED. NED only lists the cluster which it says has 30 members in an unknown area. Though within one second of arc of the cluster position is the 20th magnitude galaxy, SDSS J120559.05+522915.9. Since the cluster\'s position is listed with an uncertainty of 1.5\" but the galaxy\'s position is listed to an accuracy of 0.5\" the two positions likely are the same. Oddly I measure the galaxy as being at the location of the cluster rather than the other way around. Though my software might be fooled by the star directly to the south. I\'ve had that type of error before. NED shows no redshift data for the galaxy. 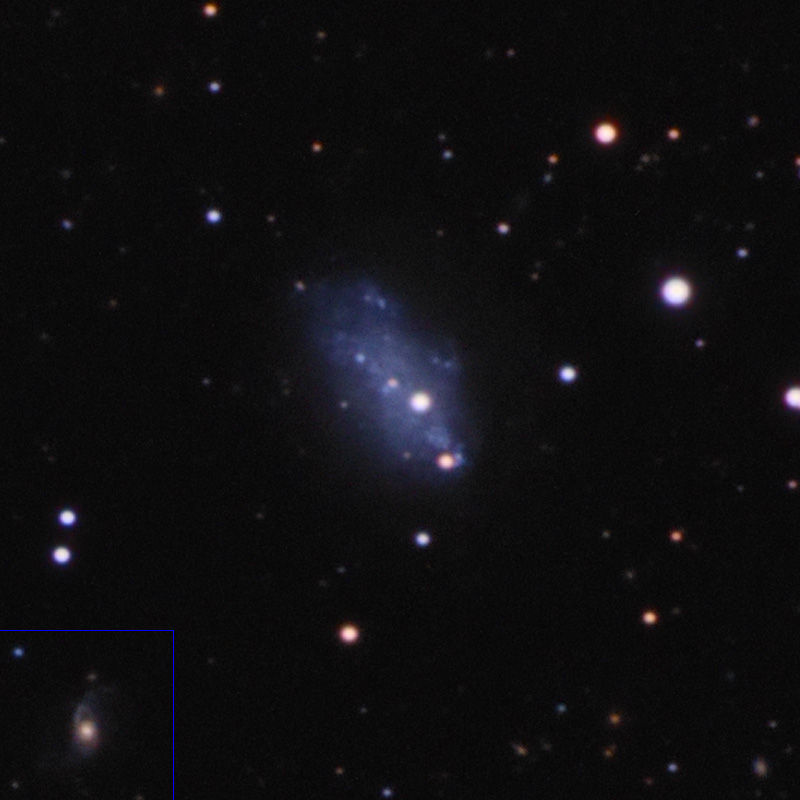 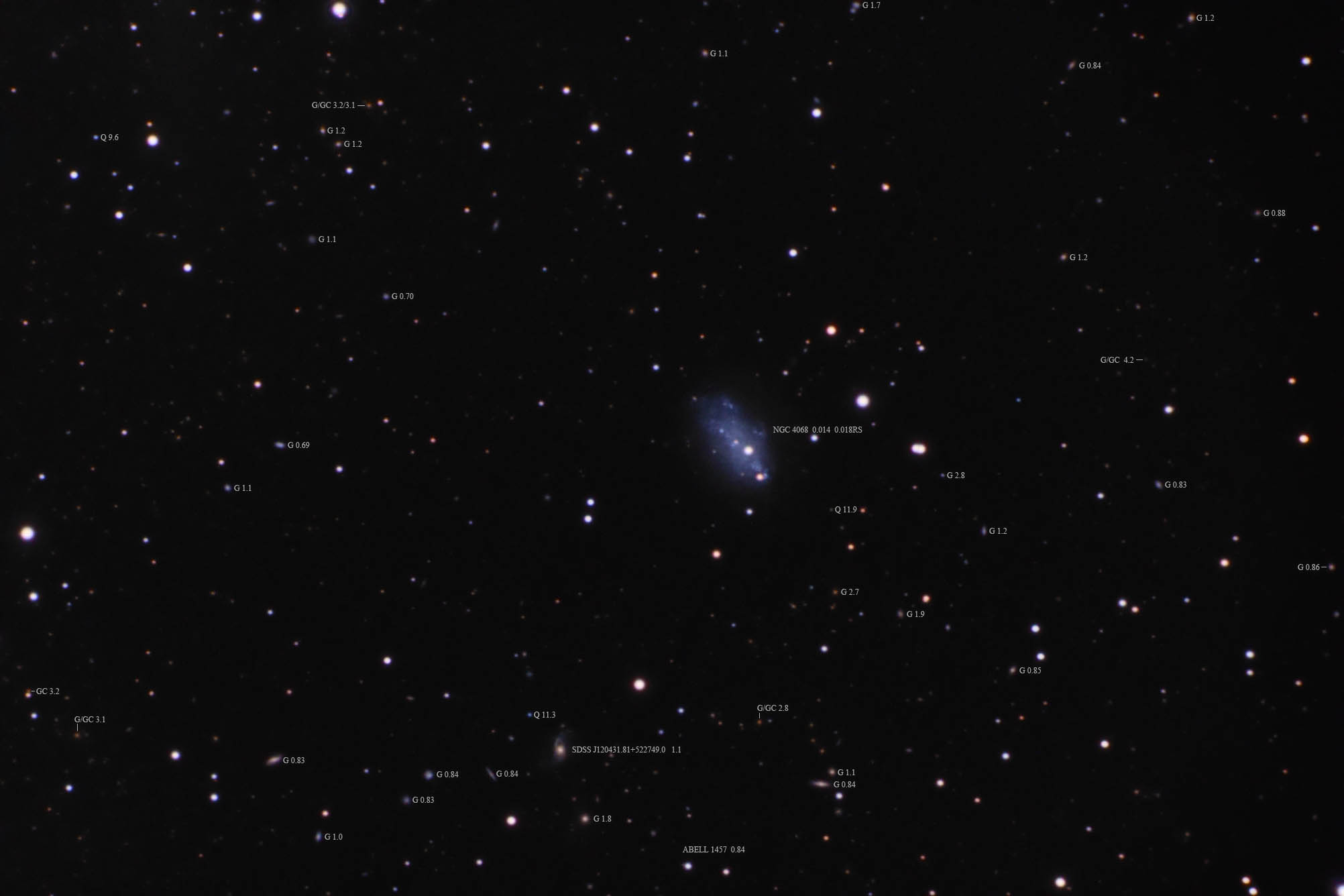 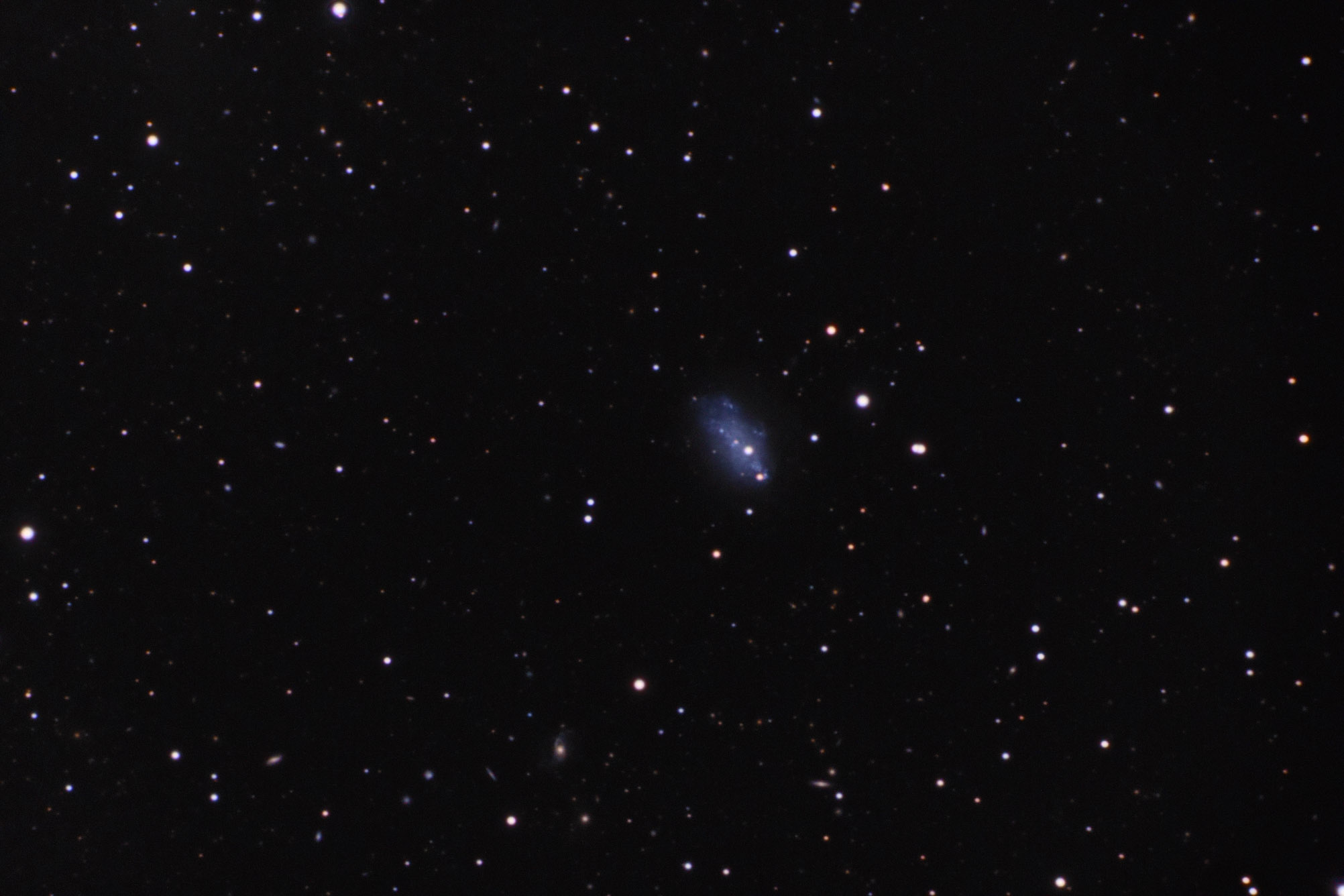