NGC 4102 is a rather strange spiral galaxy in Ursa Major southwest of the bowl of the Big Dipper, not far from the far more well-known M109. It is about 50 million light-years away. I found little consensus on its distance. In fact, I found two different radial velocities giving two different results. Other techniques give even more results. All range in the 47 to 95 million light-year range. Most center around 50 to 60 million light-years. It was discovered by William Herschel on April 12, 1789. My log entry from the original H400 project made on May 4, 1984 using a 12.5\" f/5 scope from the New Mexican badlands on a very good night says; \"Bright nufleus, tilted spiral with some arm detail seen. About 12th magnitude.\"

What caused me to put this one on my strange galaxy list is it seems to have three different orientations of its disk. The very core is oriented nearly north-south. The outer ring is rotated about 30 degrees counterclockwise and the inner disk between the core and outer ring turned another 25 degrees counterclockwise. The entire disk appears warped to me but this may be due to the triple axes of symmetry and thus an illusion. Oddly I found no papers discussing these odd features. The inner disk is quite red with a complex set of dust bands sort of spiraling out. Beyond this the outer ring has a blue band of knots with some HII regions I pull out as pink even without using H alpha data. Beyond this the ring turns red again. So seems to have this ring of star formation. There\'s a bright object I first took for a star near the edge of the galaxy to the southwest. But it is oval. NED shows it to be a galaxy but has no redshift data on it. Could it be the cause of some or all of the galaxies oddities? A bit beyond this compact galaxy is what I take to be a very distant red galaxy just above a red star. Unfortunately it isn\'t in NED at all. It is clearly a galaxy. The annotated image shows others with a question mark as well that are not in NED even though they lie near far fainter galaxies that are picked up. I didn\'t search for these, just ran into them wondering if I could find redshift data.

Several galaxy clusters are in the image. I marked one that had no core galaxy to point to. In a couple other cases there was a core galaxy at that point but NED had no redshift data on it. Since in all cases where a core galaxy did have redshift data it was different than the photographically determined redshift of the cluster those with only one value are all the value for the cluster, not the galaxy. 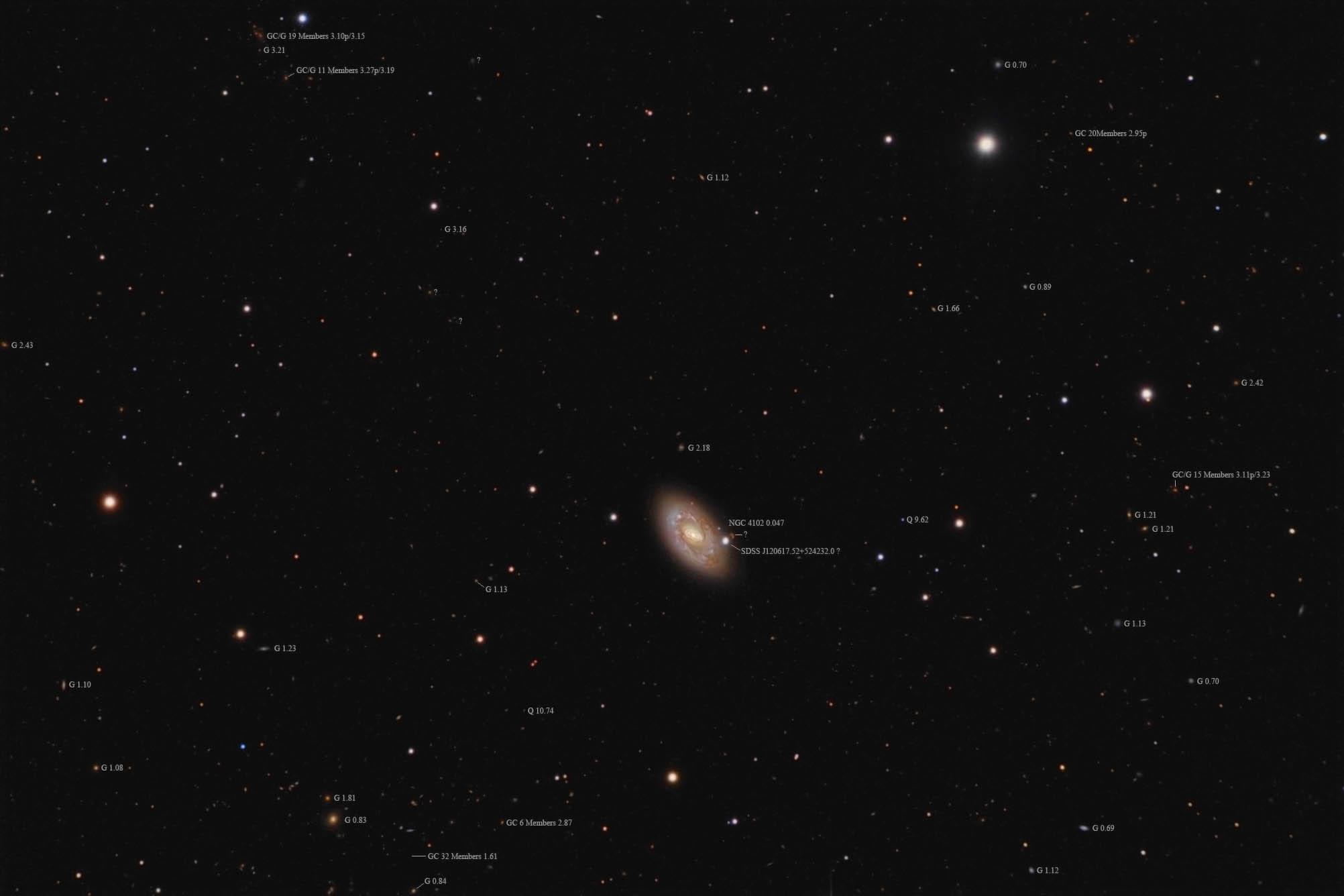 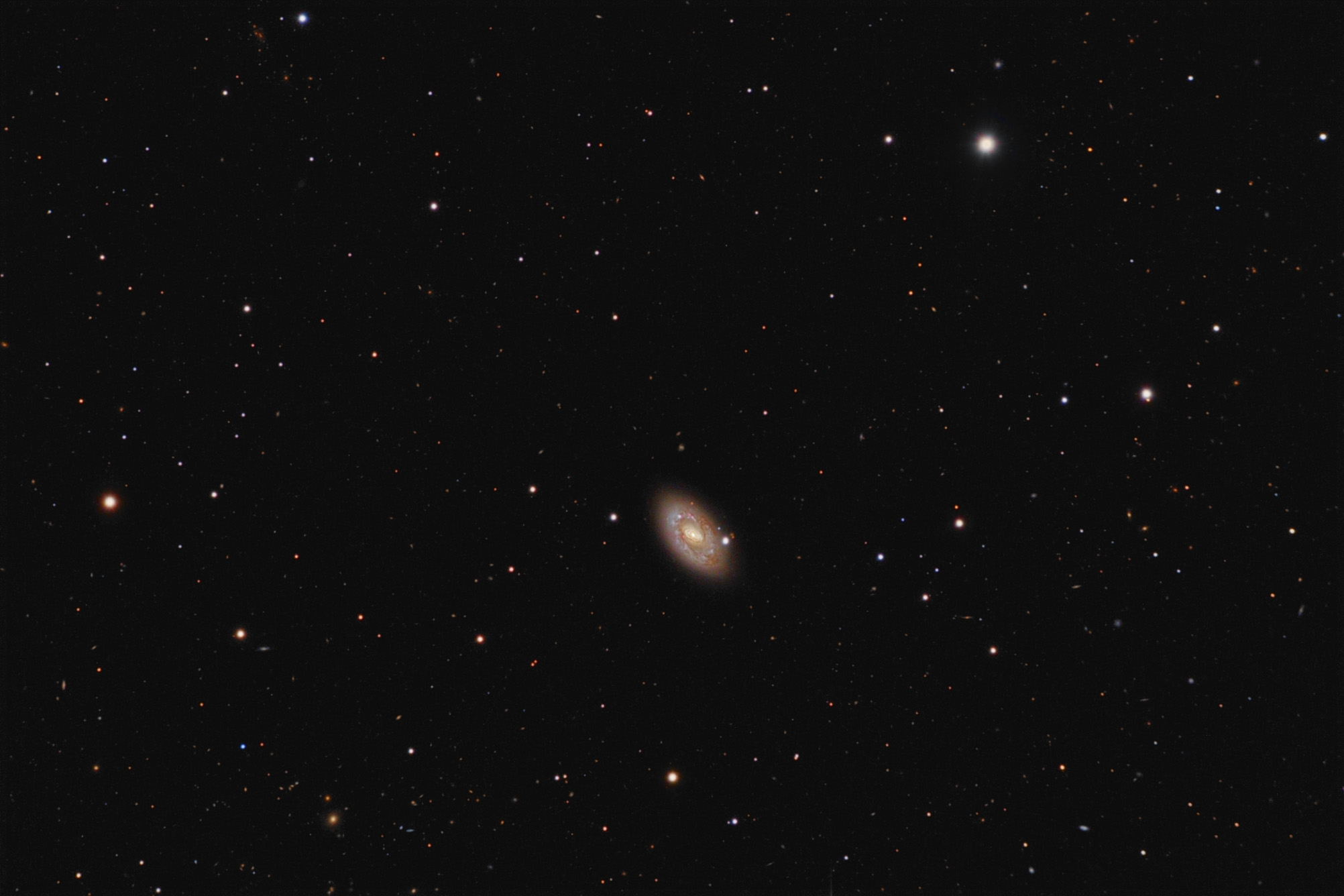 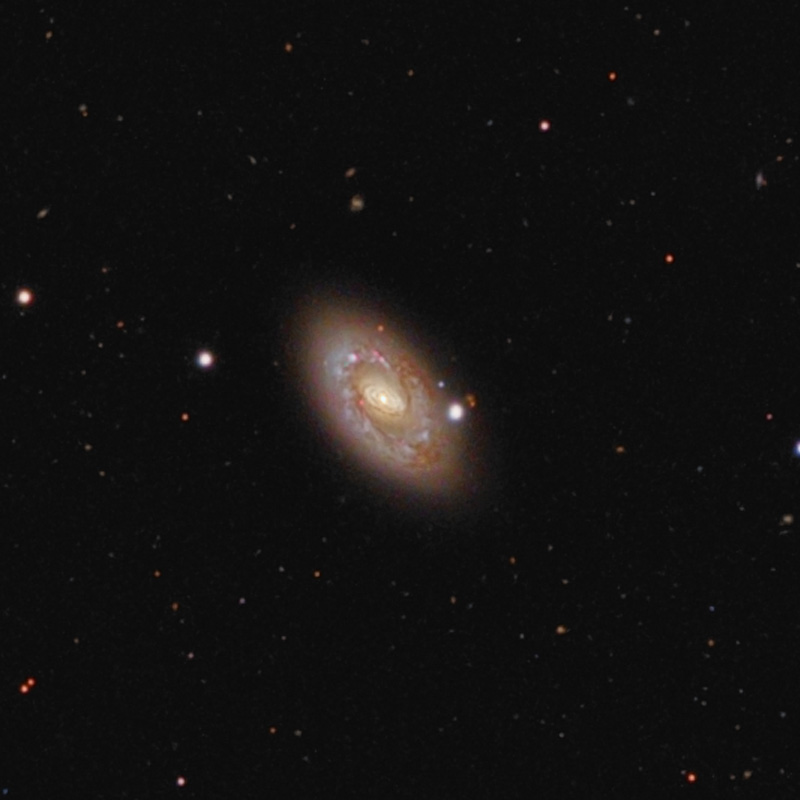