NGC 4151 is one of two galaxies studied in the paper that introduced the concept of Seyfert Galaxies so is one of the most researched galaxies in the sky. So this text is rather long. Yet when I searched for it I found very few amateur images of this rather spectacular galaxy. Why amateurs ignore one of the most important galaxies in the sky I have no idea. How studied is it? Well, it has 67 different catalog listings in NED and 78 in SIMBAD. NED lists 52 detailed notes from papers on it, most major galaxies have a dozen or so. SIMBAD lists 2901 references for it. I didn\'t begin to explore them all. But for all these papers we seem to have a really poor understanding of how far it is from us. I found at least a dozen different distance estimates ranging from about 13 million to nearly 100 million light-years for this galaxy. NED puts its redshift at 57 million light-years while a mean of 7 non-redshift measurements says 22 million light-years. NASA has a nice write up on it that says 43 million light-years. That write up calls it the Eye of Sauron Galaxy and is at: https://www.nasa.gov/mission_pages/chandra/multimedia/11-029.html#.VUHAhpOrF9s . Then I found this article that claims to have pinned down its distance with an error bar of 10% as 62 million light-years http://www.sci-news.com/astronomy/science-distance-eye-sauron-ngc4151-02303.html . With at least 12 different measurements to choose from, roll a dodecahedron die and see what comes up then verify with a Magic 8 ball. I\'m going to go with the 62 million light-year figure as it is the only one to even give an error bar with its estimate.

Using the 62 million light-year figure just how big is this galaxy with his expansive outer arm structure. Again I have some major discrepancies. I measure the arms on my image as being about 8.3 minutes across while NED says 6.3. Other sources give other sizes. None as large as my measurement however. Still, I\'m quite confident in it as representative of the extent I picked up. That gives a diameter of about 150,000 light-years. Large for a spiral but not out of line with other large spirals. Using NED\'s diameter it is only about 114,000 light-years. about the size of our galaxy.

It was discovered by William Herschel on March 17, 1787 and is in the original Herschel 400 list. My comment from March 23, 1985 with a 10\" f/5 at 150 power under excellent conditions reads \"Stellar nucleus with a large outlying area. Bright and easy. Seems far larger than the 2.5\' x 1.6\' size Burnham\'s shows. Forms a nice pair with NGC 4145 a half degree to the north.\" So the size issue goes back a long way. I don\'t know why I didn\'t mention NGC 4156 a much closer companion in my image. Was it too faint for me? NGC 4145 was also found by William Herschel but isn\'t in either Herschel 400 listing. I have imaged it back in 2013. It appears slightly disturbed and has a similar redshift to NGC 4151 and a non-redshift distance of 67 million light-years, within the 10% range of the 62 million light-year estimate for 4151. They may be related and possibly have interacted in the distant past but I can\'t find anything on this.

NGC 4151 is a very photogenic galaxy that amateurs have virtually ignored. I can\'t understand why. The delicate blue streamers mixed into the main disk are quite unique. I\'ve never seen another galaxy quite like it with these fine streams of blue stars that seem to have no connection with a normal spiral pattern, especially at the southeastern end.

UGC 7188 is a really messed up galaxy to the east that probably is a companion to NGC 4156. Though one paper calls it a companion of NGC 4151 with a distance of 57 million light-years. I don\'t know how that was determined. Maybe it just assumes it\'s redshift is the same. I don\'t know. But for such a highly studied area all these discrepancies seems unusual.

On the north edge of UGC 7188 at a position midway between two blue somethings NED says another galaxy with HII emission is to be found. It gives a similar redshift to that of UGC 7188. I think it likely is just a pair of star knots in the galaxy buried in HII and not really a separate galaxy.

There are many other interesting things in the image some cause me to wonder what the... Above UGC 7188 are two galaxies listed at NED from the MDS (HST Medium Deep Survey) In my image as well as the Sloan image they show as stars. No detail at all yet NED lists one as a peculiar spiral and the other as an E0 with debris. How was that possible from images that look just like stars? Also, I thought I was being rather silly using the term debris for the stars spilled out by galaxy collision and here NED is using the term! But no hint of spiral structure or debris was seen. So I went to the HST image. There the lower is certainly a spiral the core seems off center which may have earned it the pec label. The northern galaxy is much smaller, just barely larger than a star in fact but extremely saturated. When I stretched the image something is seen to the south. I can\'t tell if it is another galaxy or a stream of debris but it looks more like another galaxy to my eye. Down and to the right is a larger galaxy with obvious debris that was too faint to show on my image. So at least I know NED was using the HST image to classify these to otherwise points of light.

To the southwest of NGC 4151 is a quasar at 11.53 billion light-years that NED lists as having DLyA characteristics. These are rather rare I think as it is the first I\'ve come across in all the years I\'ve been annotating images. It stands for Damped Lyman Alpha. You can read about what the heck that is at: http://en.wikipedia.org/wiki/Damped_Lyman-alpha_system

Another quasar in the image, this one north of NGC 4151 at only 5.85 billion light-years, is listed as being a BLLAC. This stands for a BL Lacertae-type object. They are often considered not to be quasars but a step or so below quasars in activity level. They lack the broad emission lines that characterize quasars. Though NED often calls them quasars. You can read more about this at: http://en.wikipedia.org/wiki/BL_Lac_object

Several galaxies are sitting behind clouds of transparent gas. We know they are there as they add dark lines to the spectrum but with a lesser redshift indicating they aren\'t associated with the quasar as opposed to DLyA clouds. I\'ve listed both the distance to the galaxy and to the AbLS (the gas cloud with the initials for Absorption Line System). These all are just west (right) of NGC 4151.

To the northeast of NGC 4151 is a tight trio of galaxies. So tight they overlap in my image. The two southern ones have redshift values that put them 2.37 billion light-years distant. They have only one designation each at NED and it is long starting with NGC 4151. I listed both on the same annotation with one distance. The northern member had no redshift data.

Now for another mystery. NGC 4151 is listed at NED as being the center of the NGC 4151/WBl 383 galaxy group of 16 galaxies with a redshift distance of 190 million light-years. Now how can a group be at a distance over 3 times that of the galaxy it is named for? Not only that one single galaxy in the image has a redshift or any other determined distance of even close to 190 million light-years. I\'ve not a clue to this one!

Nothing like imaging one of the most studied galaxies of all time (besides our own local group) and finding all these issues. I expected this one to be super easy and it has taken me many days to figure all this out and I\'m far from finding answers, just more questions.

The first night I tried for this one I got three good luminance frames then was clouded out. I succeeded the second night so have 7 luminance frames rather than my normal 4. Probably helped a bit to bring out the arms but conditions that first night were poor for transparency so I doubt those three were of much help. I know they degraded resolution a bit but hope it was worth it to get slightly more of the faint arms. 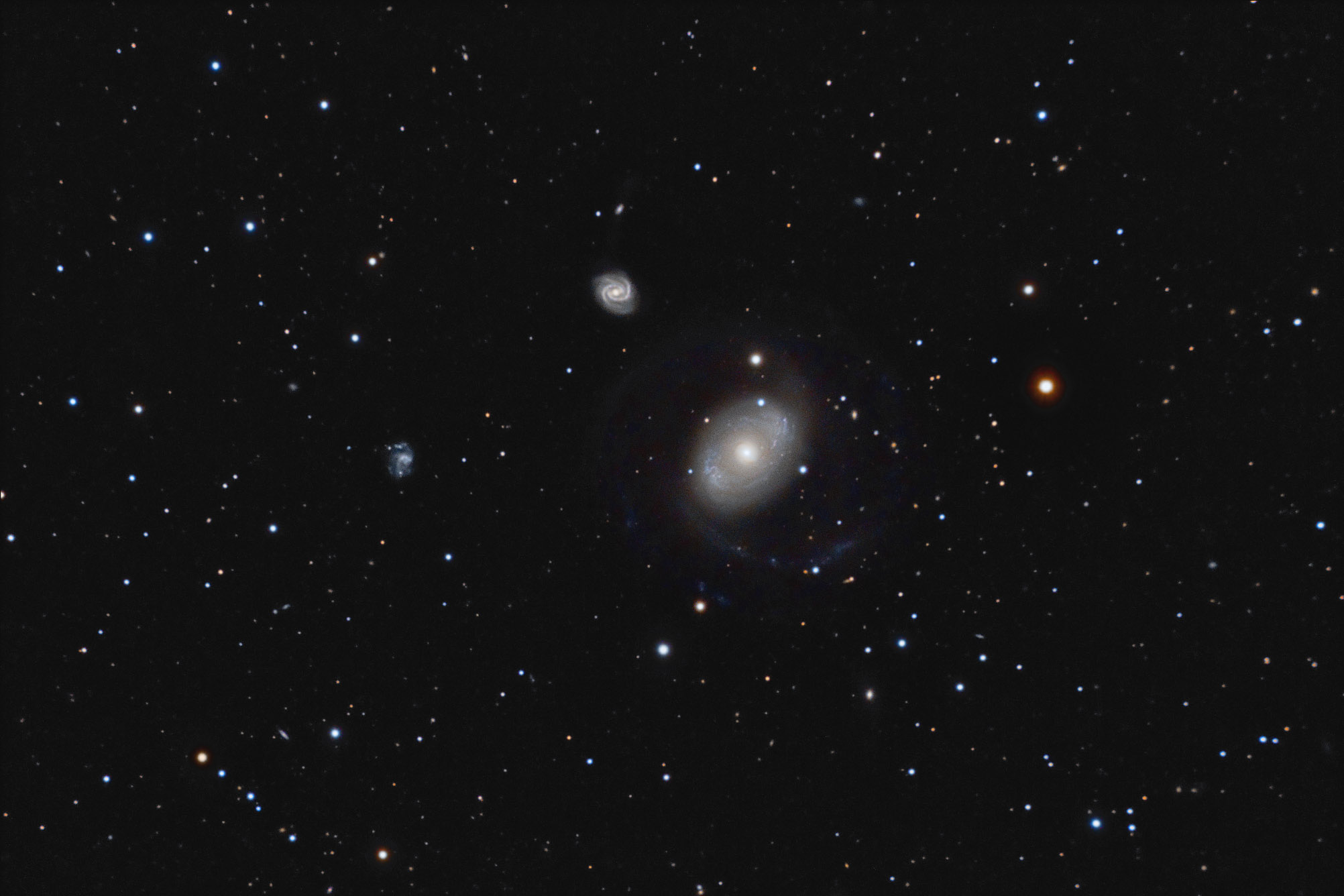 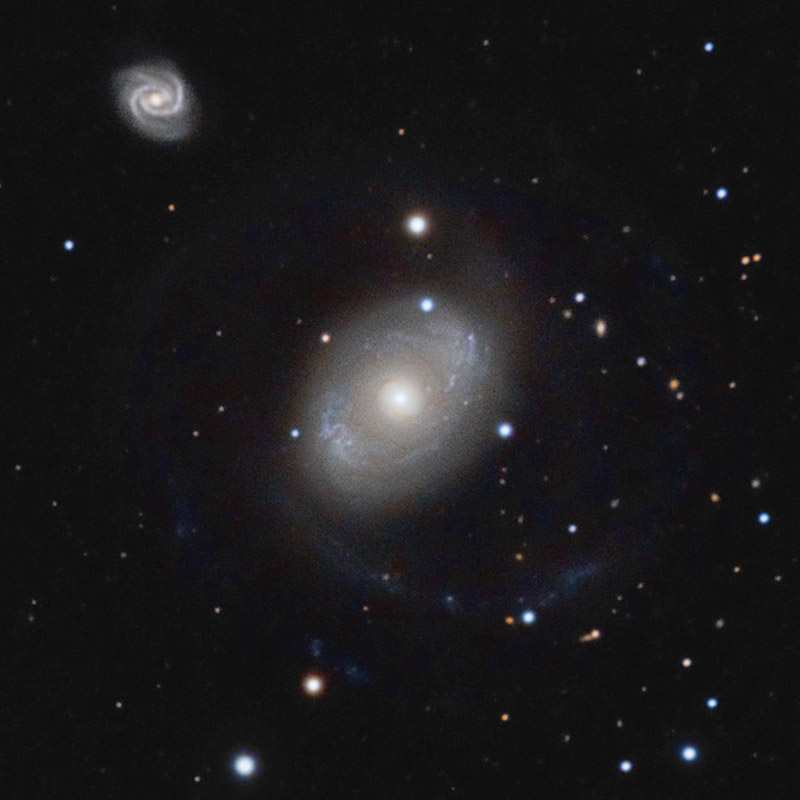