NGC 4157 is a very large, near edge-on spiral galaxy in eastern Ursa Major on the border with Canes Venatici. In fact, the very faint eastern extension of the galaxy lies in Canes Venatici. NED and most others classify it as SAB(s)b?. It was discovered by William Herschel on March 9, 1788 and is in the second H400 program showing not all the \"good ones\" are in the first 400. They saved some for the second. While my notes from the second are lost my notes from the first, indicate I was wondering why some losers were in the first list when some like this one weren\'t. I measure it at about 150,000 light-years across making it a huge spiral. It likely would be spectacular seen face on though I suspect it may not have as bright a surface brightness as say M51 or others in this part of the sky. While redshift puts it at 45 million light-years distant other measurements average out to 54 to 55 million light-years. Most sources I saw say it is likely at least this distant. Some say it is a bit further away which makes it even larger than my 150,000 light-year estimate. For such a nice galaxy I was surprised how few amateur images I found of it. I assume the two faint extensions, most easily seen to the upper left, are due to faint, widely extended arms rather than plumes. If so it might be more a SAB(s)c or even SAB(s)d galaxy if seen face-on.

Also interesting are two possible companions to its south. DDO 111 is a blue galaxy, a bit further out than was expected when the catalog was made if the redshift is right. It certainly is a blue but a star poor irregular galaxy about 25,000 light-years across. It is classified as an irregular Magellanic galaxy much like the two Magellanic clouds near our galaxy. Is it seen edge-on or is it really long and thin? It appears slightly warped as well. For some reason, it carries two PGC numbers 38767 and 38781. Nearby at the same redshift is a dwarf S0 galaxy only about 11,000 light-years in size. Their projected separation is only 65,000 light-years. Likely they are considerably further apart or more distortion would be seen in both.

Also in their area is the distant galaxy cluster of GMBCG J182.80962+50.30621. Most of its galaxies have a redshift distance of 3.85 to 3.87 billion light-years. Just under NGC 4157 is another galaxy cluster, GMBCG J182.79448+50.42954 at 4.58 billion light-years. At least that\'s the distance to its bright cluster galaxy. No other galaxies in the group were listed with redshift distance, likely due to its great distance making most too faint. 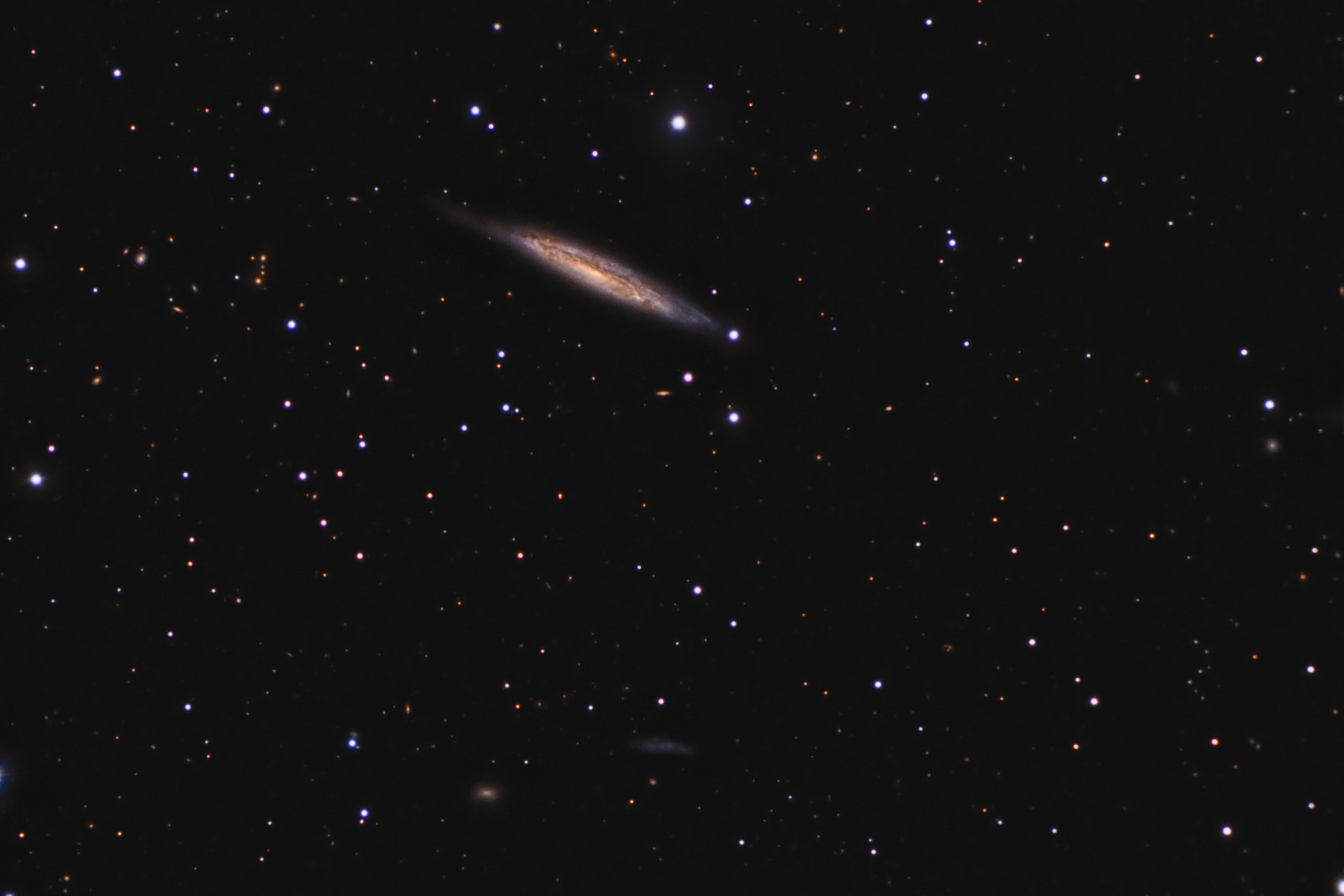 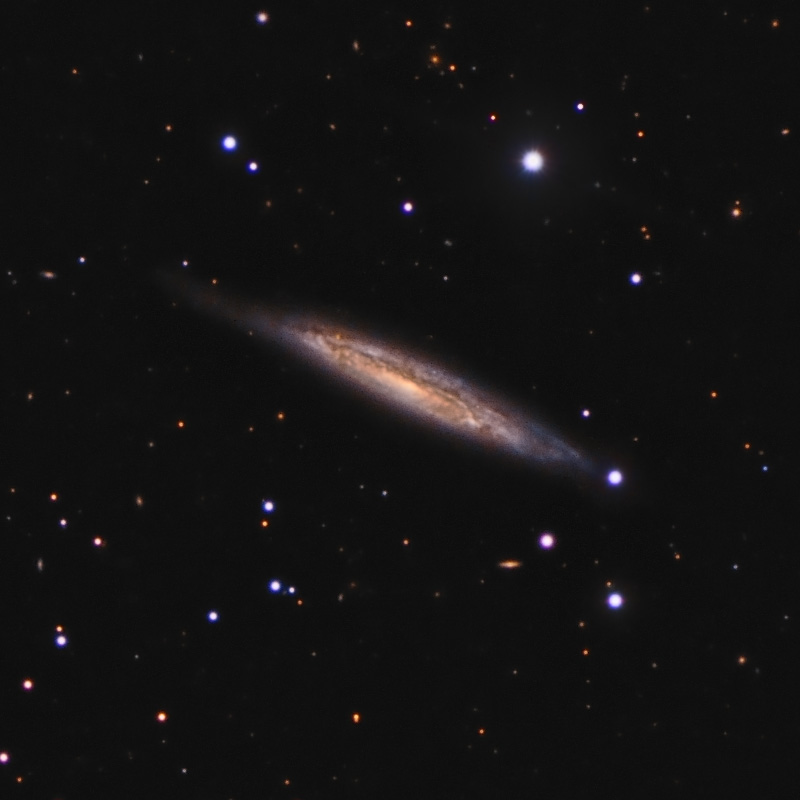 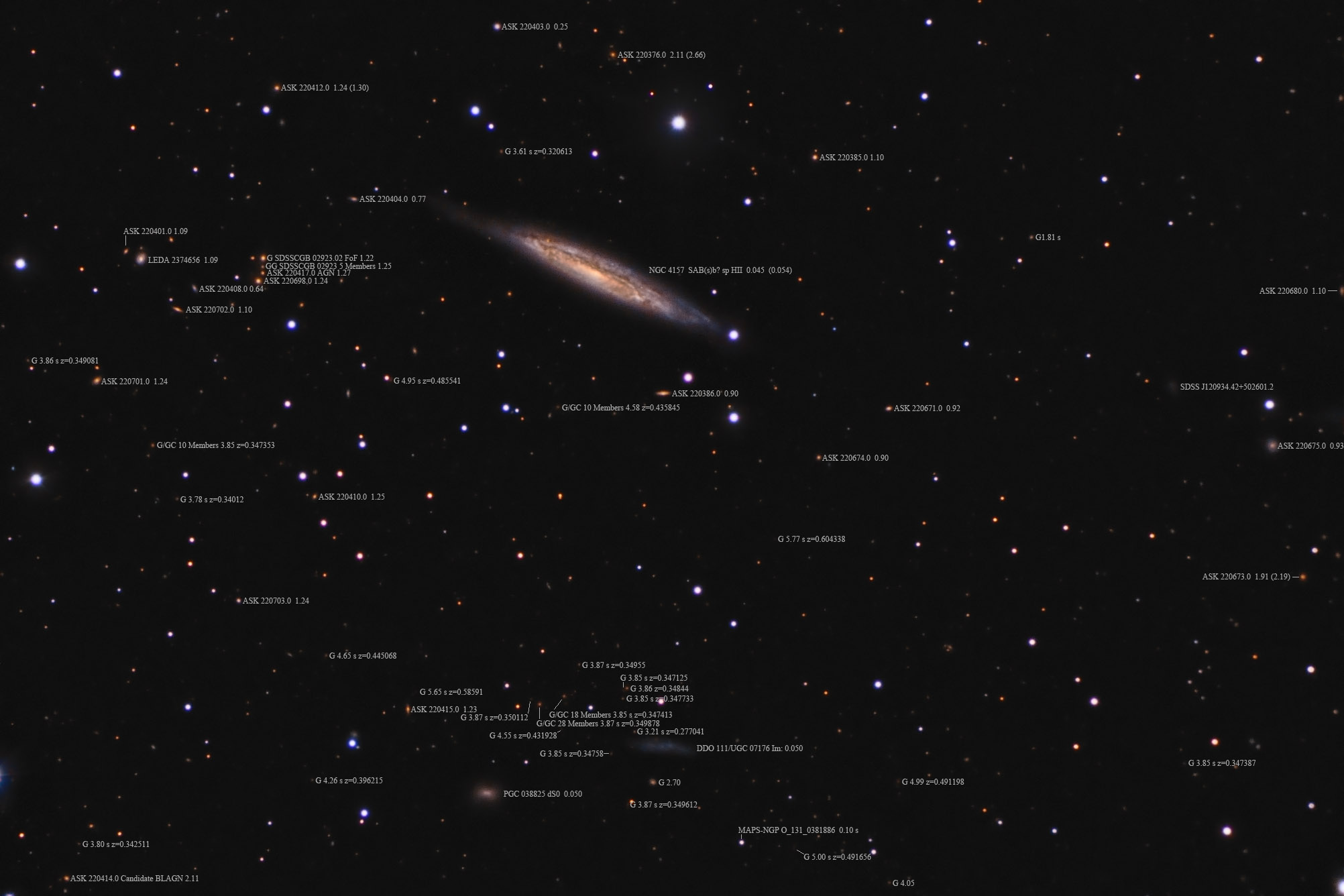