NGC 4163/NGC4167 is a dwarf starburst galaxy that is part of the Ursa Major group just west of the far better known and larger dwarf NGC 4214. It is located in western Canes Venatici and about 935 million light-years away. The HST has studied this and a couple other dwarf starburst galaxies. You can read about it at http://hubblesite.org/newscenter/archive/releases/2009/19/full/ Click the \"Release Images\" tab to see the individual galaxy images. Hubble had no trouble resolving it into stars. My seeing wasn\'t very good the night I took this, over 3\" so I resolved nothing I\'m afraid. Maybe on a better night. While redshift puts it at 20 million light-years this method isn\'t reliable for such short distances. Study of the individual stars, especially the tip of the red giant branch gives the more reliable estimate of 9.3 to 9.5 million light-years. I show both (HST determination in parentheses) in the annotated image.

West of NGC 4163 is the galaxy cluster WHL J121144.6+360943 with 23 members in the proverbial unknown area. The photographic redshift for the cluster puts it at 3.5 billion light years but the spectroscopic measurement of the BCG at its heart says 3.6 billion light-years which is likely more accurate. Quite a few faint fuzzies are seen in the area that are likely members but none anywhere near as big and bright as the BCG of the same name as the cluster.

The NSCS J121108+360614 galaxy cluster to the southwest has no core galaxy. It is listed as having 44 members but no radius is given. Many faint fuzzies are in the area, however. I assume many to be cluster members. The annotated image denotes the center of the cluster as defined in NED. The error circle is 15 arc seconds so the center is rather ill-defined compared to my line. Then all this got blown out of the water when I noticed WHL J121105.2+360656, another galaxy cluster less than a minute of arc away. It is said to have 11 members in that same unknown radius at a photographic redshift of 3.4 billion light-years. So which are which of which cluster is now something unknown to me. This group does have a galaxy at the cluster\'s core position (well in the center of its 15 arc second error radius. But it isn\'t listed as a cD (cluster dominant or center dominant are corrupt definitions but work here) or BGC (Brightest Galaxy in the Cluster) nor does it have a redshift that I found.

A more correct explanation of cD is that it is part of a galaxy classification system from Yerkes Observatory in which c stands for a very large galaxy while D is used for one that is very diffuse. Since many central galaxies of a cluster are huge and diffuse SO or elliptical galaxies due to having merged with many cluster members they get this classification. But they are also the dominant galaxy in the cluster and usually in the center hence the other uses of the term.

Near the edge of the upper right quadrant are some galaxies at 1.7 billion light-years. Just off the edge of my image is the location of the galaxy cluster MaxBCG J182.68333+36.25398 and its BCG. They are shown at 1.7 billion light years. The cluster has no given radius and 14 members. Some appear to be labeled in my annotated image. 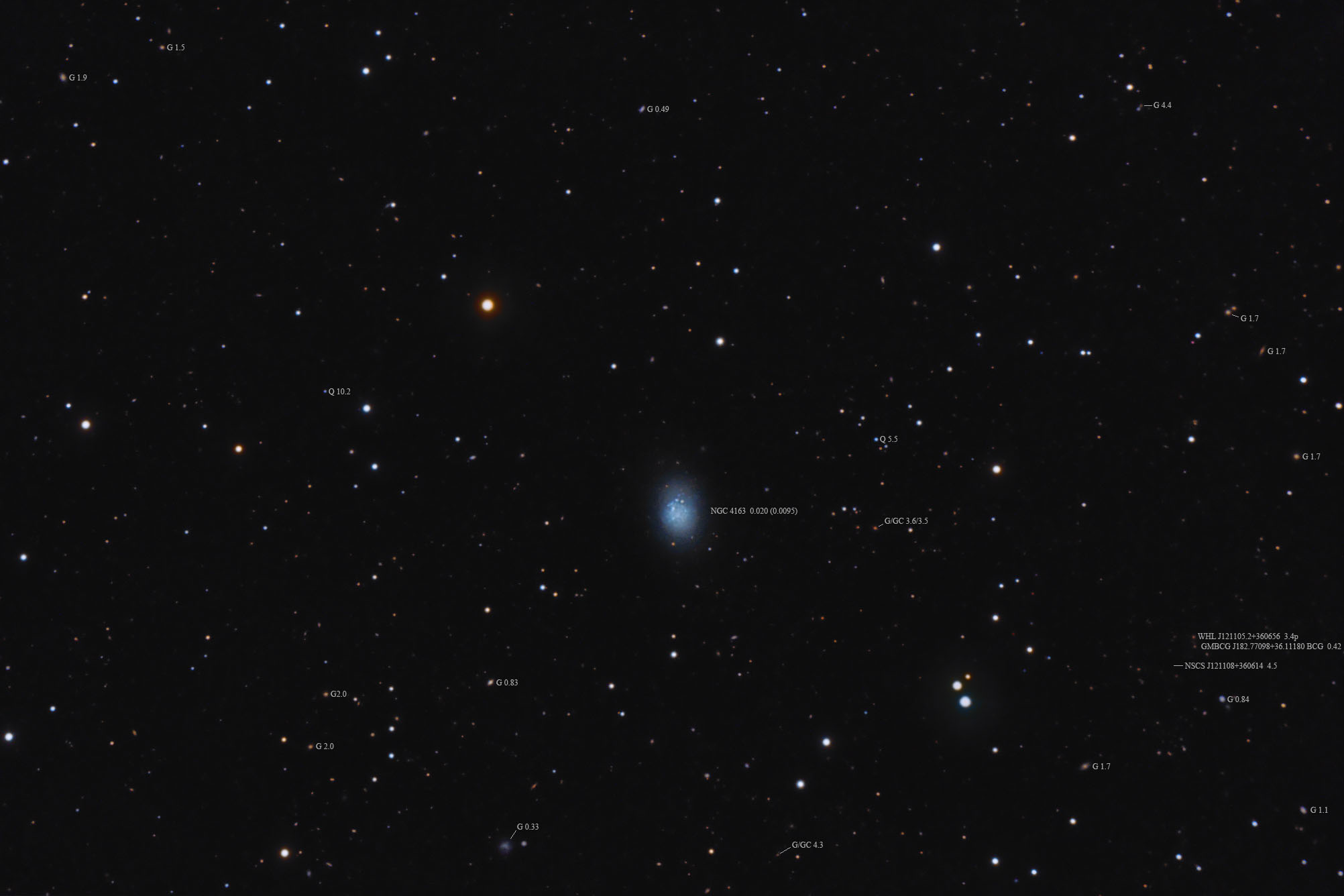 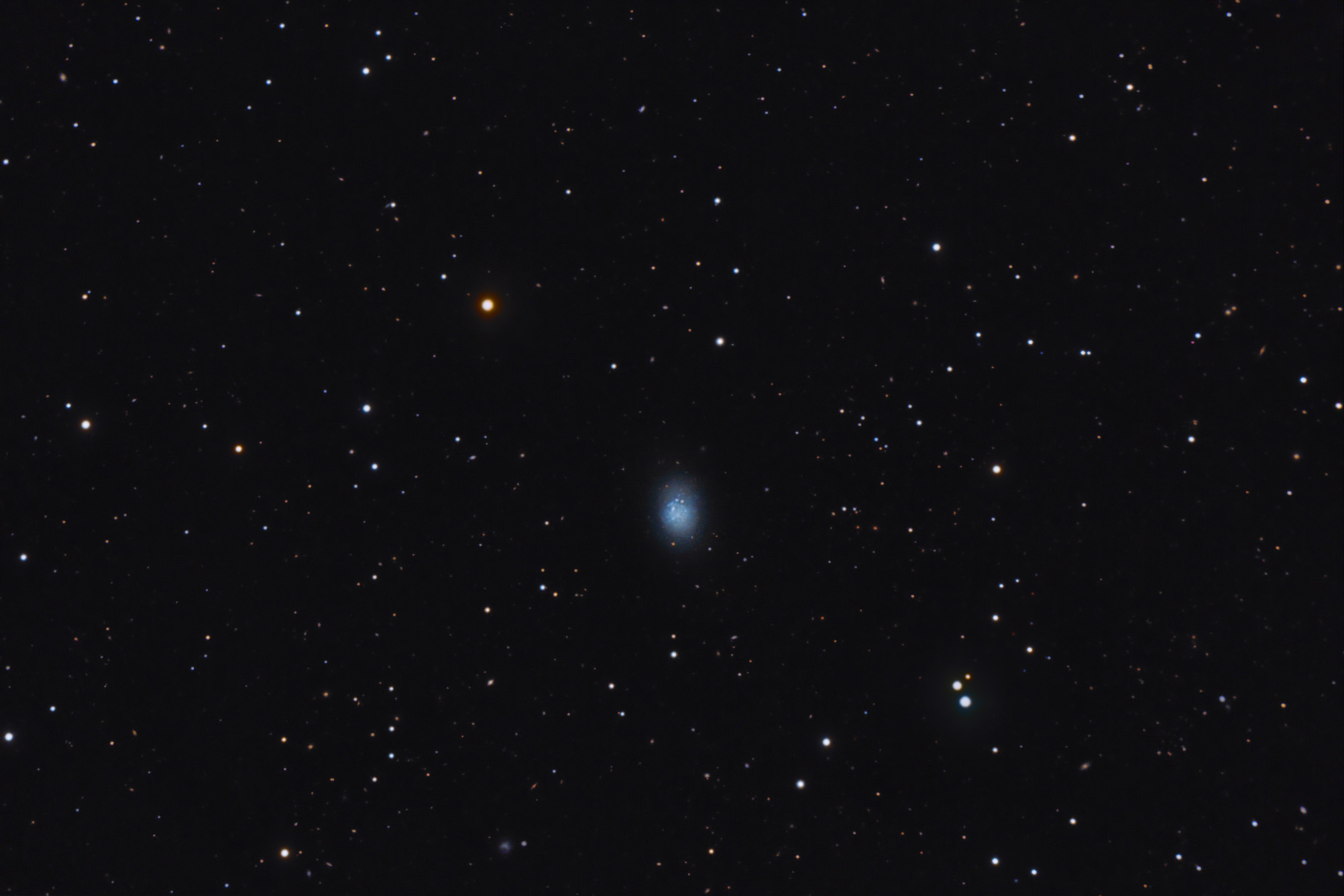 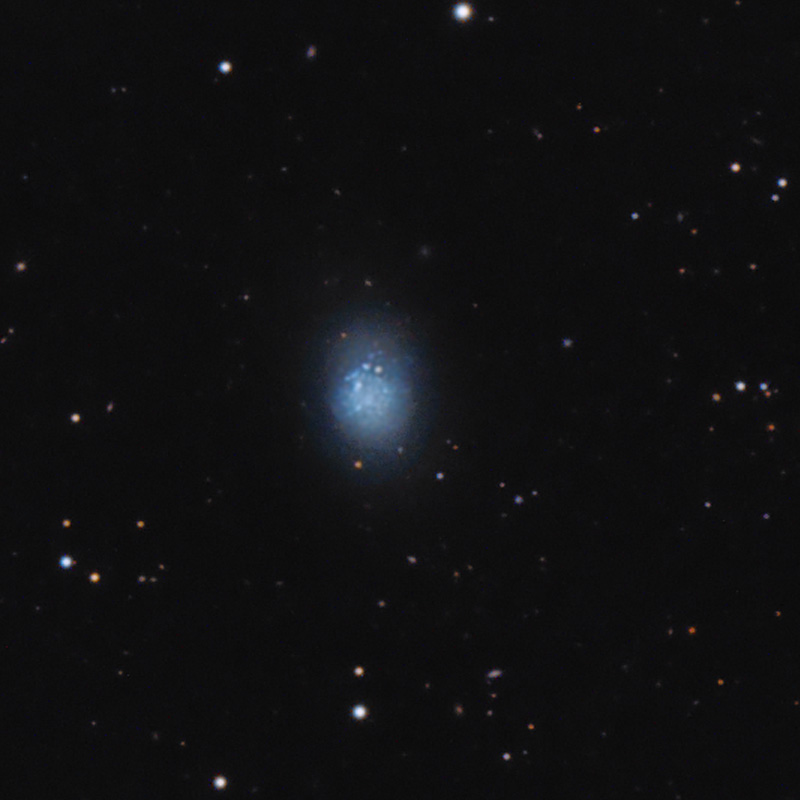