NGC 4183/FGC 1368 is a near edge on flat galaxy in western Canes Venatici 3.75 degrees south of the far more well-known M106. It is classified as SA(s)cd?. Except for a faint dust lane, I see little spiral structure. I suspect seen face on it may be a very flocculent galaxy being made up of many short arm segments rather than full arms. The two blue objects at the top are large star clusters. This one went on my to-do list as an interesting flat galaxy. While it was discovered by William Herschel on April 14, 1789 it isn\'t in either of the two H400 observing programs which surprised me. It is about 53 million light-years distant by both redshift and non-redshift measurements. That agreement is unusual. If you look closely you will see it has faint extensions off either end. They are longer on the northern side. I suspect these are faint arms rather than plumes. The nearly doubles its size. Measuring the obvious bright portion it is about 55 million light-years across but when the faint extensions are included it nearly doubles to over 106,000 light-years in size. Likely a longer exposure than my standard 40 minutes would show it as even larger.

Off the southern end and in the faint extension as a tiny object NED considers a separate galaxy at about the same redshift. I have to wonder if it, like the bright ones to the north isn\'t just another star cluster in the galaxy. If that side is rotating toward us that might explain the small redshift difference. Even assuming the closer 49 million light-year distance it is less than 1000 light-years across. Awfully small for a galaxy but not a star cloud. Those in the northern end are larger yet not considered separate galaxies.

This was a night of better than typical for spring transparency so goes down past 23rd magnitude so I picked up and was able to label galaxies down to 6.4 billion light-years distance. One galaxy is labeled from the KISSx catalog. That stands for Kitt Peak National Observatory International Spectroscopic Survey Red spectral region - candidates. The x is for candidates. 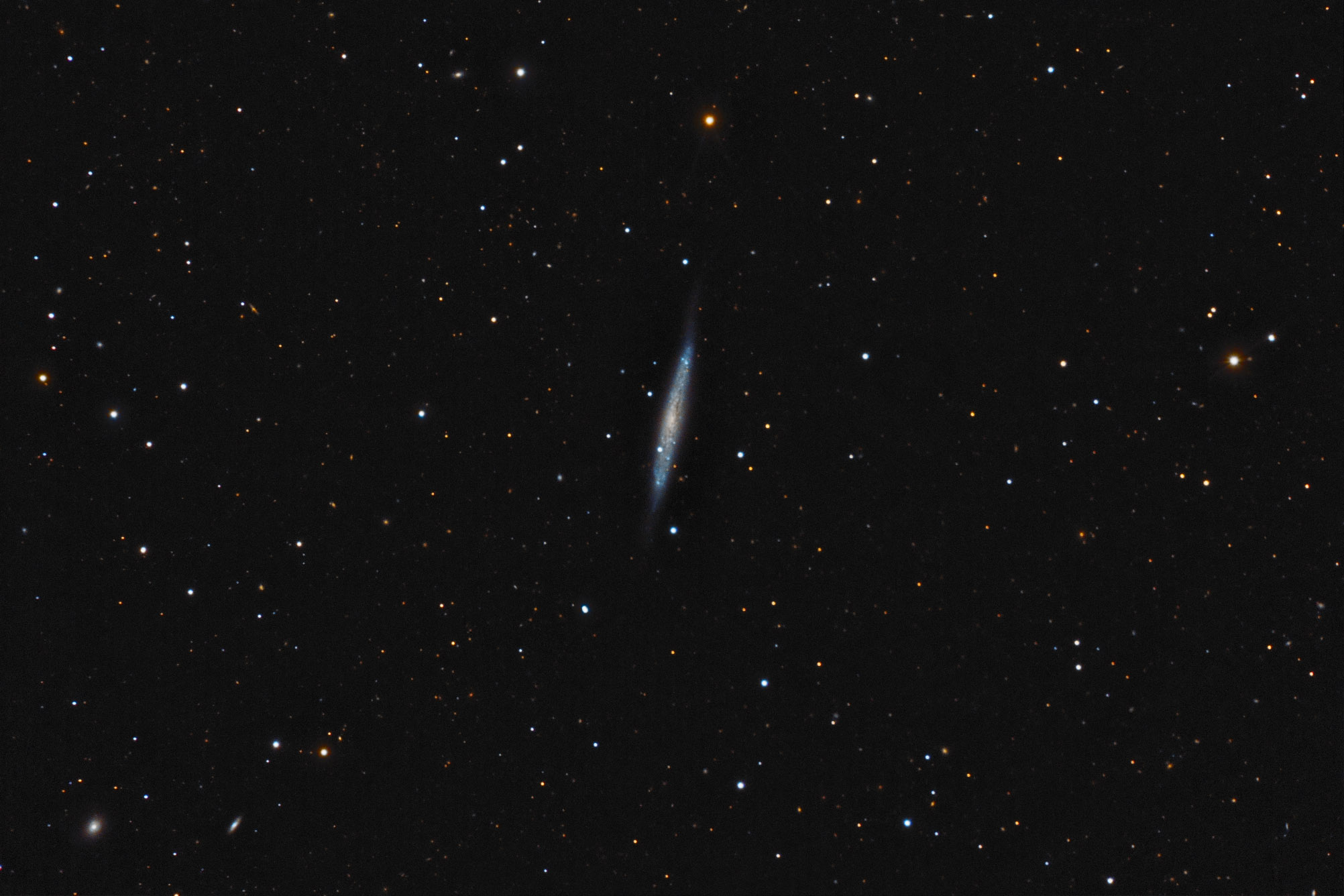 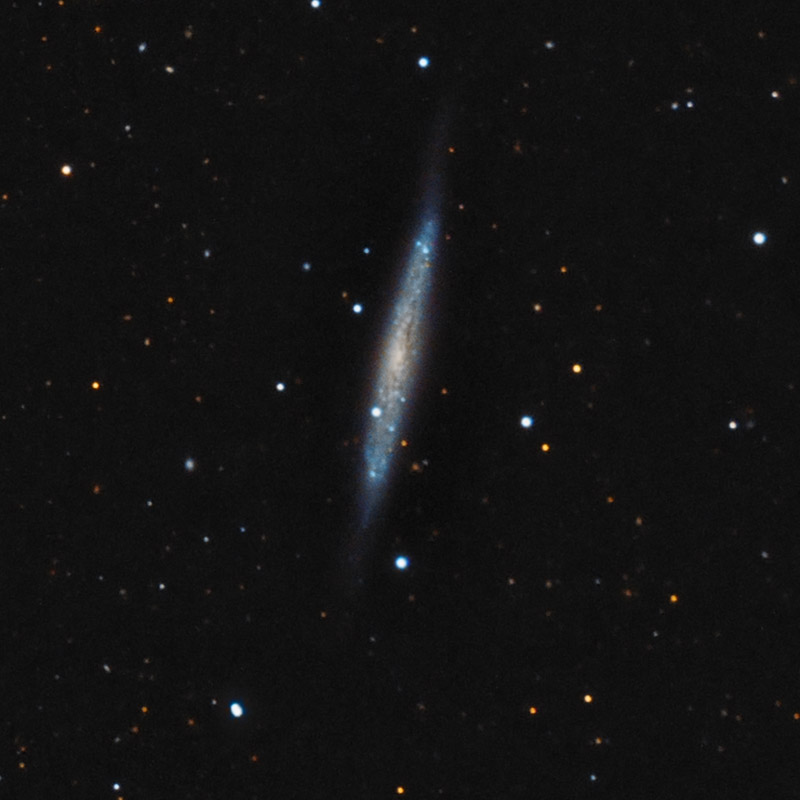 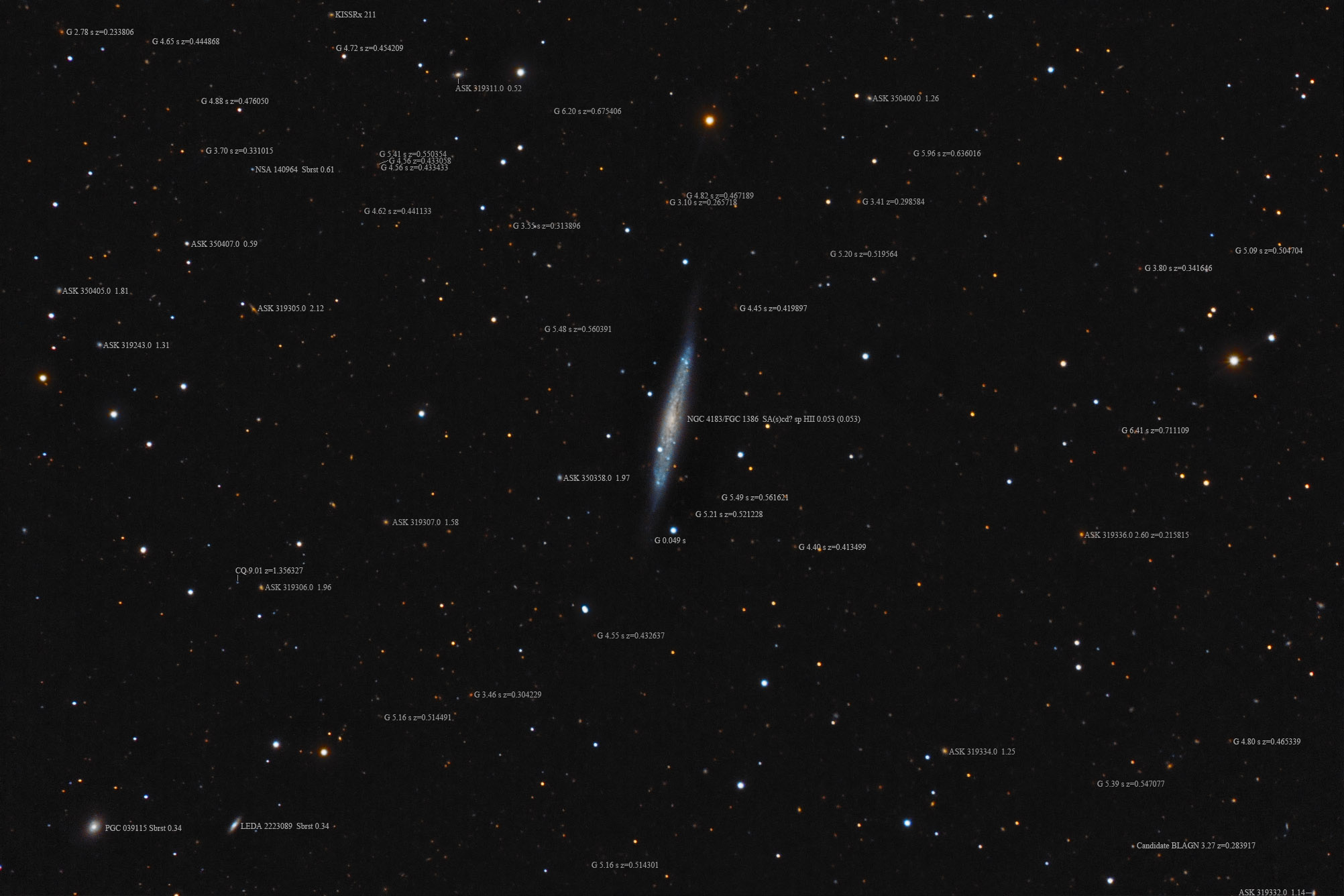