NGC 4244, sometimes called the Silver Needle Galaxy, is a nearby edge-on spiral in Canes Venatici. It is classed as SA(s)cd: with HII emission. The blue stars in such HII regions drown out the pink color of the HII emission. I will need to add H alpha filtered data to pick that up by holding back the glare of the stars formed in these regions. The distance to this galaxy is usually put at about 15 million light-years putting it too far to be in the local group or M81 group. It is sometimes considered part of the M94 group. It is about 81,500 light-years across if the distance is assumed to be 15 million light-years. Redshift puts it further away at 23 million light-years. The redshift velocity is pretty inaccurate at close range so I\'ll go with the other determinations that say 15 million. That also fits with the resolution seen in the HST image. See below for more on that. It was discovered by William Herschel on March 17, 1787. It is in the second H400 program.

Looking through the literature I see a lot of disagreement about the bright object at its core. Some say it is the core, others it is a field star. Looking at most images, including mine it looks like a star. In fact, I was going to come down on the side of it being a star but then looked at the PSF (Point Spread Function) of it in my data. That shows it certainly is not a star. This is where the numerical data trumps what the eye sees. Compared to stars of similar brightness on the image, the PSF is very wrong for a star. But looking for more, just before posting this I checked the Hubble Legacy Archive. They had a great image of the core region of the galaxy. I did a quick process of part of the frame. At over 70 meg I had to severely crop it for bandwidth limits. Those with the right software can go into the site and see the full frame. It clearly shows the core to look very much like a miniature M104. Apparently, it is round in all images I\'ve seen of the galaxy only due to our lack of resolution compared to the HST above the atmosphere. So that \"star\" is definitely the core of the galaxy. Now why the core is so obvious but the dust lanes so obscure I don\'t know.

Then looking further I found this paper using some of the same data I used for the mono image above but processed further. It calls the disk a \"flattened nuclear central cluster\". You can read all about it at http://www.gemini.edu/node/10989. No need for hip waders as it is a press release rather than a scientific paper.

My blue data was severely hit by clouds (I sound like a broken record over this of late). I suspect this has reddened the core region some with it showing slightly more orange than it really is. Though web images show quite a wide range of core color from very orange to all blue. I suspect I\'m close but just a bit too orange. I just couldn\'t push the weak blue any further without stars going wonky on me. I refuse to process one part of an image differently than another in this respect so left it what I feel is likely a bit too orange though most of the stars do appear about right to me when calibrated against Sloan photometric data.

Also, seeing wasn\'t what I\'d hoped for reducing my resolution. I think the star clusters should stand out more if I had better seeing. I might eventually get around to trying again under better conditions. Edit: Still hasn\'t happened. 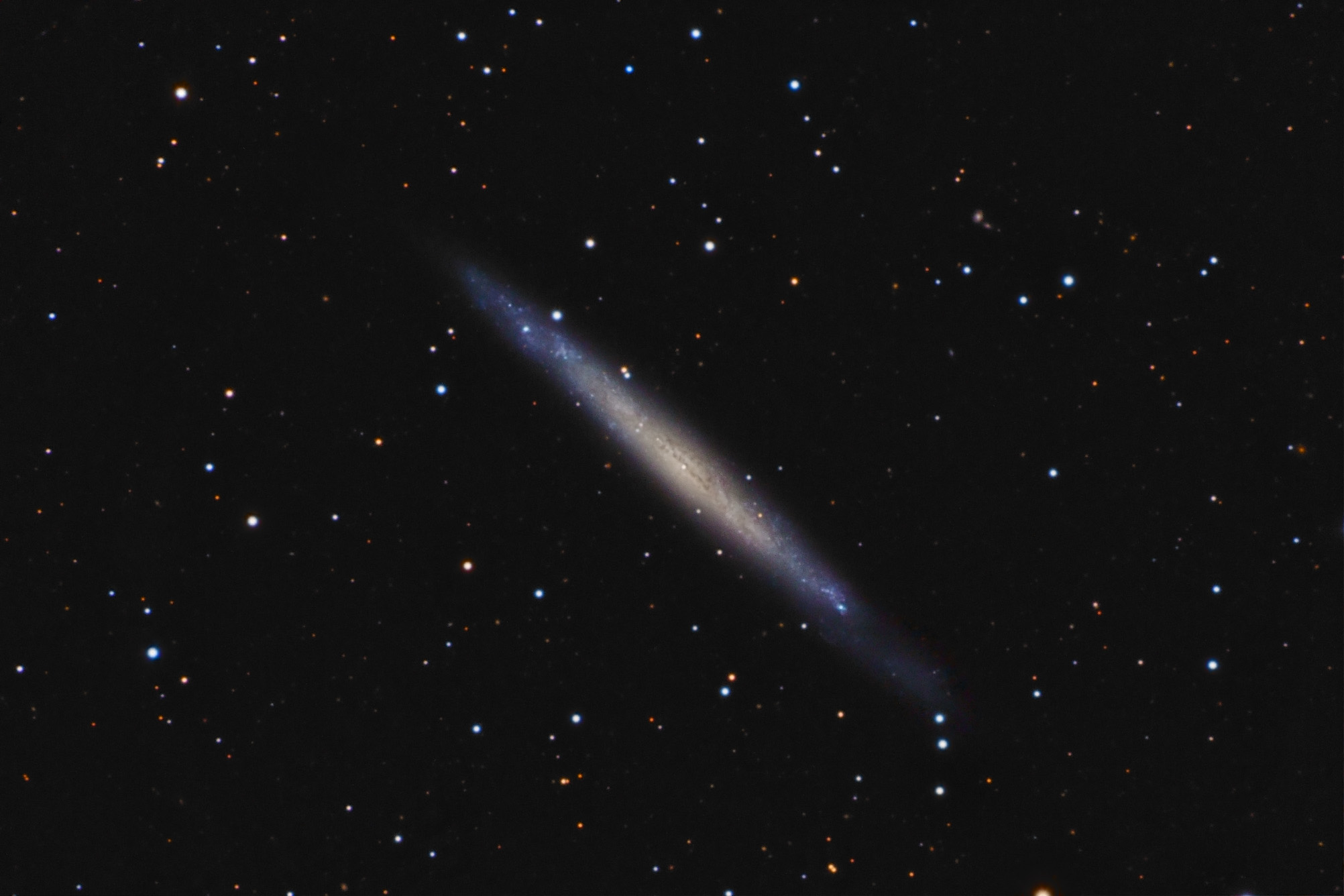 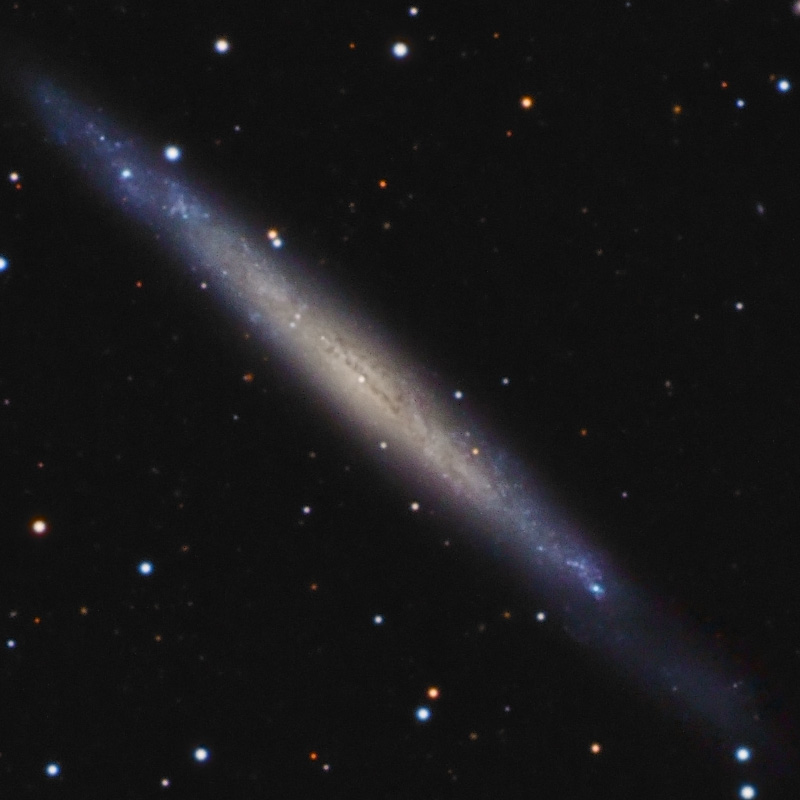 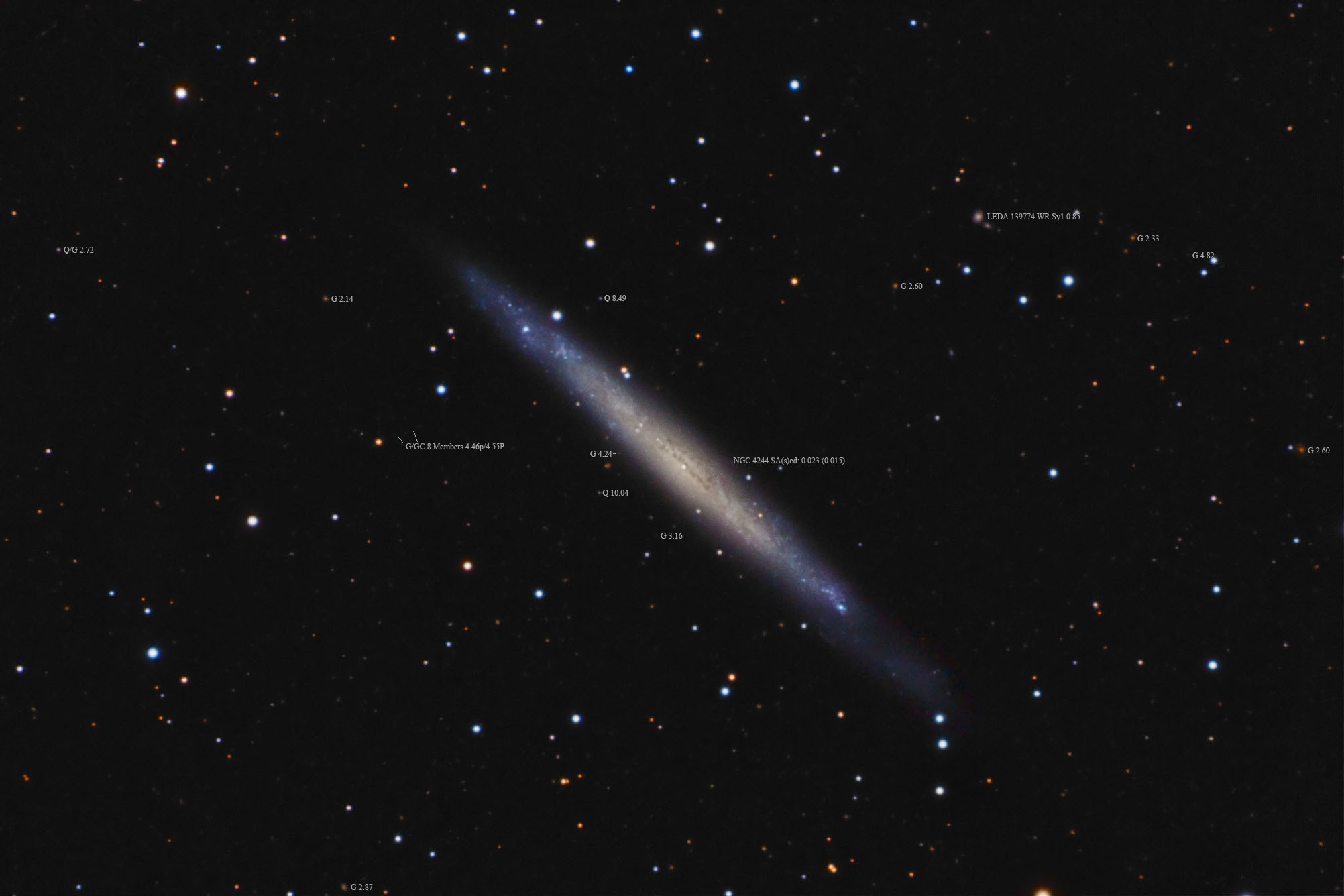