I had both NGC 4270 and NGC 4273 on my to-do list. 4270 for its plumes and shell-like structure and 4273 for it sloshed appearance. Somehow I never realized they were in the same field. Turns out 6 other NGC galaxies, an IC galaxy and a bright rather nearby Abell Galaxy Cluster managed to fit in the frame as well as many quasar candidates. This turned out to be one interesting field. There\'s enough here for several posts. The field is about one degree northwest of far more famous M61 in Virgo. Most of the galaxies lie in what is called the W cloud rather than the Virgo Cluster itself. This cloud is about twice as distant as the Virgo cluster itself though many of its members are in the VCC (Virgo Cluster Catalog). It turns out only one NGC galaxy in this frame is actually in the Virgo Cluster. Another could be in either or neither. The rest are in the far less known W Cloud.

I\'ll start with NGC 4270 which is simply classified as S0. To me, it is a shell galaxy with a well defined sharp-edged shell on its eastern side and a diffuse one with a plume on the western side. Yet nothing I find mentions this. The closest I found was a 1994 paper on the morphology of E-S0 galaxies that says; \"An S0 with a disky lens surrounded by a boxy and rather peculiar envelope.\" All I saw before taking this image on the POSS plates was a hint of the structure that looked more like plumes so that might have something to do with it. Shells usually mean a galaxy is in the process of digesting the last galaxy it consumed. Seen against the southwestern edge of the shell is the irregular galaxy VCC 367. Both have the same redshift. Could it be NGC 4270\'s next meal? I found nothing at all on this irregular galaxy to suggest they were even related but for about the same redshift value. The bright portion of NGC 4270 is about 52,000 light-years across. Including the shells and plume, it is some 115,000 light-years across. It was discovered by William Herschel on April 17, 1786 but isn\'t in either of the Herschel 400 observing programs.

NGC 4273 was the other galaxy on the to-do list. It is a very sloshed spiral galaxy with a drawn out arm to the south on the eastern side. It, like NGC 4270, is a member of the W Cloud rather than the Virgo Cluster so is about 120 million light-years distant. It is classified as an SB(s)c galaxy and about the only blue galaxy in a field of mostly red and dead galaxies. Sloshed galaxies are usually considered to be caused by tidal forces of a much larger nearby galaxy but that doesn\'t seem to be the case with this galaxy. Other than a few references to the core being off center or the galaxy being asymmetric I found nothing on it sloshed condition. Including the faint regions to the south, it is some 93,000 light-years across. The main blue region is 40,000 by 60,000 light-years in size. It was also discovered by William Herschel the same night as he found NGC 4270. It is in the original Herschel 400 list. My log from April 20, 1985 describes it as round galaxy brighter toward the center. Apparently, I didn\'t notice the core was so far off center.

Just to the east of NGC 4273 is NGC 4277. It is listed as SAB(rs)0/a. It has two faint, low contrast S-shaped arms and a faint outer halo that extends some distance from the main nearly circular form that extends to the northwest and southeast. Its main disk is 25,000 light-years across with the faint outer halo extending to 57,000 light-years more than doubling its size. It too was found by William Herschel that same April night.

The largest and brightest galaxy in the image is NGC 4281, an S0+ galaxy with an extended outer envelope and a hint of a dust lane running through the core. Redshift puts it slightly more distant than the other W cloud members. This may be more due to its motion around the cluster\'s center of mass than a real distance difference. Still, using the redshift-distance I get a size of 100,000 light-years for its bright region and 165,000 light-years for the diameter including the extended halo. It too was found by William Herschel the same night as the others and is in the initial Herschel 400 list. My comment the same night as 4273 but after a thick haze had moved in called it small with a starlike center. That haze must have been really doing a number on it. My notes say fog shut me down soon after. I should have gone back to it again but apparently never did.

Southeast of NGC 4273 is NGC 4268. It is an SB0/a: galaxy that has a faint Saturn like appearance with a bright round core and a ring structure that is oddly not included in its classification. A reference based on an image with the Crossley reflector notes it has a faint spiral structure. But after that there\'s no mention of it yet it\'s quite evident in my image which has only normal processing. It is some 60,000 light-years across. Even though I\'ve seen it in a 6\" scope Herschel somehow overlooked this one. In fact, it wasn\'t discovered until 76 years later when Eduard Schönfeld found it on April 1, 1862 using a 6\" refractor.

NGC 4259 is the westernmost NGC galaxy in my frame. It is an S0 galaxy that is thought to be seen edge on. At least from this perspective, it is rather featureless. Being S0 it isn\'t surprising no dust lane is seen. It is about 45,000 light-years across. It was discovered by John Herschel on December 27, 1827.

At the top of my frame somewhat hidden by a bright star is NGC 4266 an edge on SB(s)a? spiral. Redshift puts it about 87 million light-years away. That\'s about halfway between the Virgo Cluster and the W cloud. But redshift of members of each but especially the Virgo Cluster can be highly distorted as members, due to the high mass of the clusters, have high velocities. For that reason, I will assume it is a member of the Virgo cluster and thus about 60 million light-years away. Using that distance it is about 42,000 light-years across. Larger if it is between the two clusters and 84,000 light-years if it is in the W Cloud. It was discovered by Albert Marth on May 26, 1864.

The last NGC galaxy in the frame is NGC 4282 listed as an S0/a galaxy only 60,000 light-years distant and thus the only one certainly in the Virgo Cluster. In both my image and the Sloan image a dust lane is visible. My image shows a blue band in its disk just north of the dust lane. Only hints of this are seen in the Sloan image. Why it is so strong in my image I don\'t understand. I see it easily in the raw data before any processing other than calibration. Of the 8 NGC galaxies in the frame, this is the smallest at only 16,000 light-years across. It too was discovered by Albert Marth the same May night as NGC 4266.

IC 3153 is the last major catalog galaxy. It is an Sc(r) near face on spiral that\'s 540,000 light-years distant. Its spiral arms seem rather messed up but there\'s nothing nearby to cause it. Could be due to something it digested a billion years ago I suppose. It\'s about 75,000 light-years across. It was found on April 8, 1894 by Hermann Kobold. He was a German astronomer at Strasboug Observatory. He found 38 IC objects using their 18\" refractor. This may sound odd but only 3 of these were stars one being a double star. Back in visual days, it wasn\'t unusual for stars at the limit of visibility to be mistaken for a galaxy. To have this happen only 3 times out of 38 objects is actually good.

Many of the background galaxies are a bit over 1 billion light-years distant and cluster toward the lower right corner. They belong to the Abell 1516 galaxy cluster which is listed at 20 minutes in diameter and containing some 32 members. That count seems low to me. It is listed as morphology class II-III. Class III has no core galaxy, Class II has two or more major galaxies. I put the label across the center of the position as NED shows it. That\'s a bit south of LEDA 097407 that certainly appears to be the major galaxy of the cluster in my image. What is off the screen I don\'t know. Often a core galaxy of a cluster will be listed as cD but the only cD galaxy is well north of the center area which is unusual but not unheard of.

NED lists many UvES objects \"Ultraviolet Excess Source\" in the image. All could be quasars but so far haven\'t been confirmed and only have photographic redshift determinations. These can sometimes go astray.

Also in the frame are two asteroids, one very faint, the other rather bright. The trail has a break in the middle because conditions went south during the taking of this image and it stopped for a bit. Then improved enough that it could be finished. I got the blue data before it closed in again. The green and red frames were taken a different night. Even that night was poor so only one green was usable. With only blue recording the bright asteroid I removed it from the image since the asteroid was no longer in the frame when red and green data was taken several nights later. This last year and a half have been horrid for capturing data. I\'m hoping this spell will eventually come to an end. 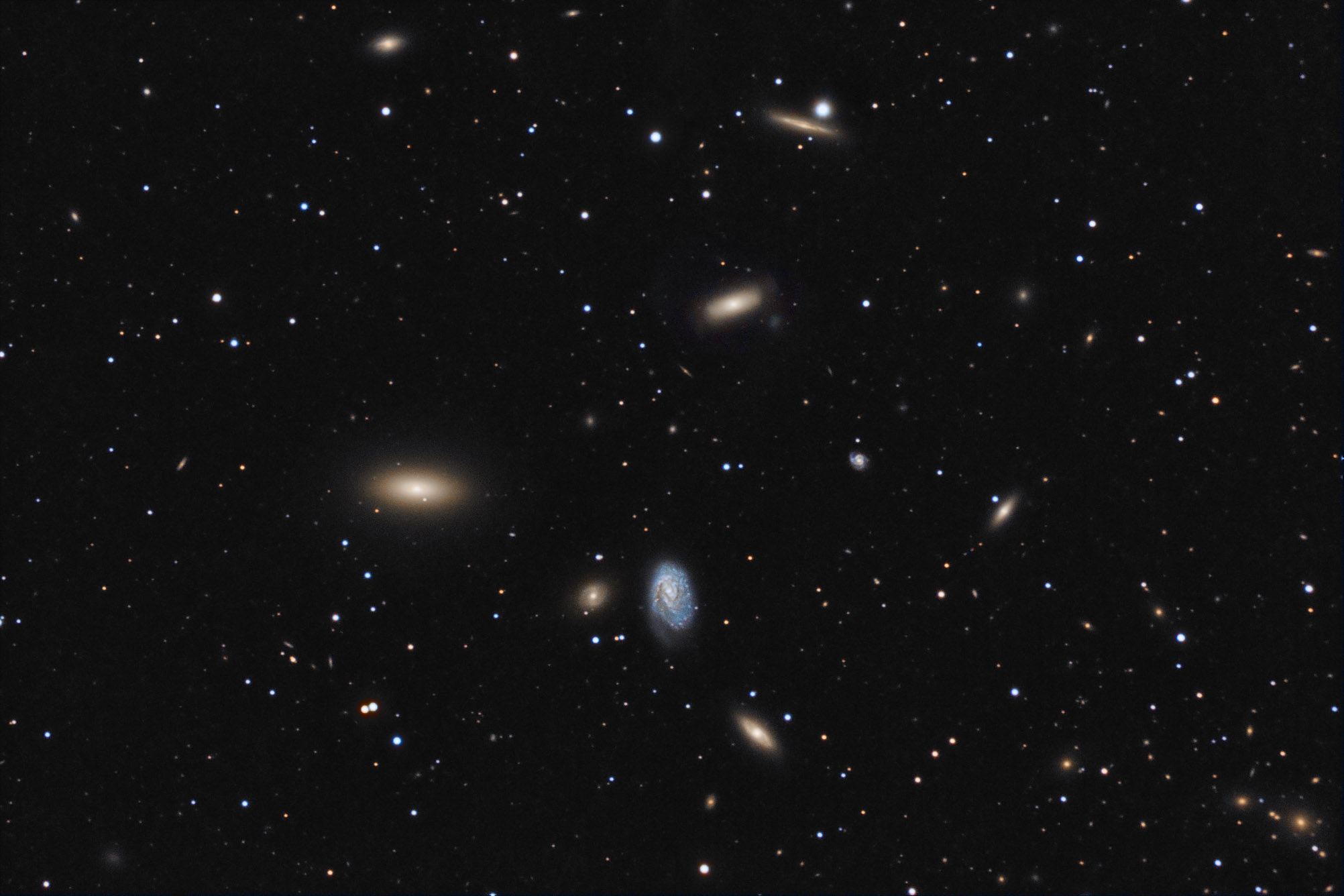 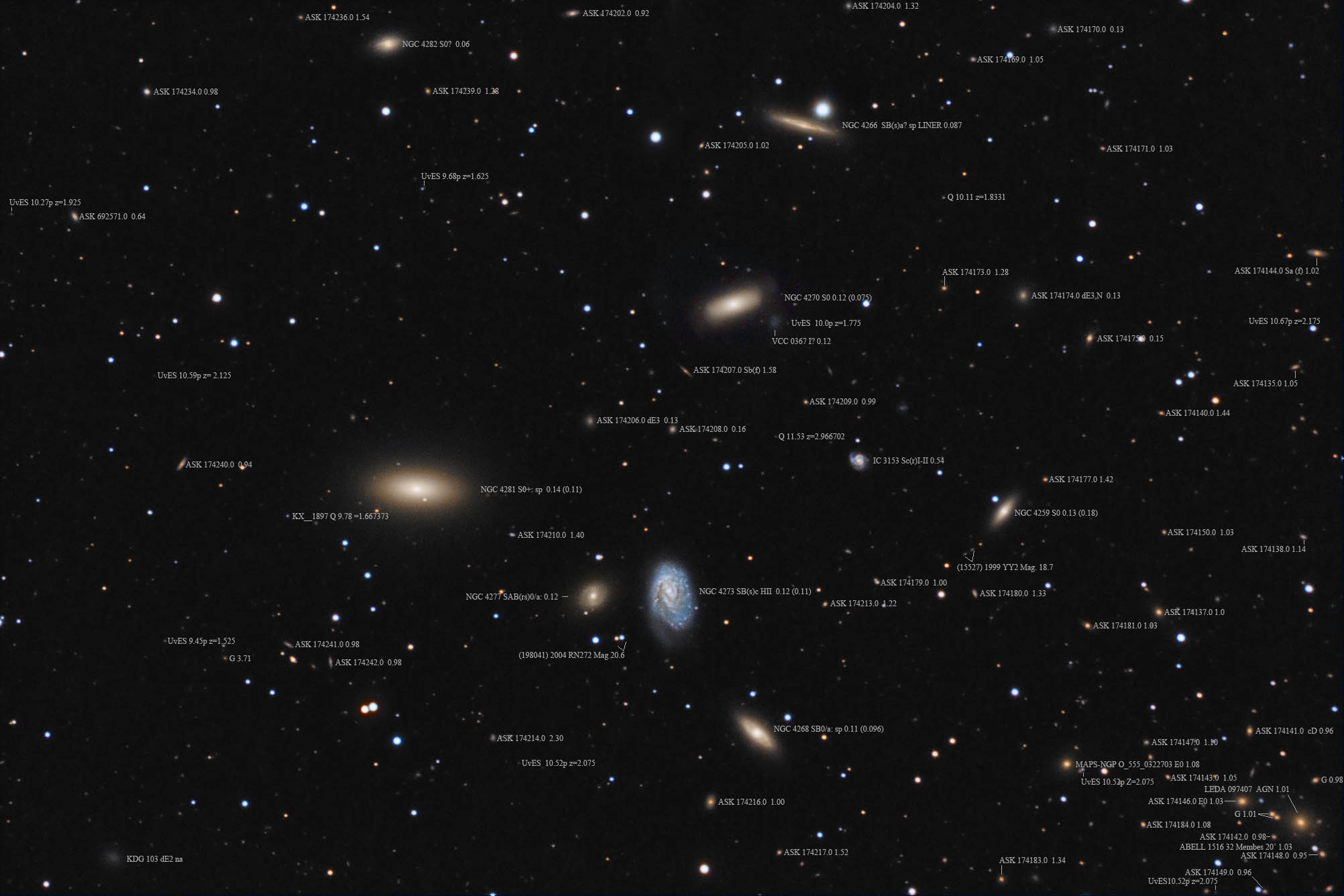