NGC 4298 and 4302 are a commonly imaged pair of galaxies in the Virgo galaxy cluster about 60 million light-years away. Redshift puts them a bit further than this. They share nearly the same redshift indicating they could be quite close together. This, however, appears rather unlikely as there\'s no real sign of interaction. If they were as close as they appear to be from our perspective distortion of NGC 4302\'s edge on disk should be obvious. It shows no sign of being warped. Both galaxies do show a large faint outer halo than their obvious disks but again, these would distort if they were really close and this isn\'t seen.

NGC 4298 is a somewhat face on flocculent galaxy. NED and the NGC project class it as SA(rs)c. If the outer halo is included it is over 90,000 light-years in diameter. The bright blue disk itself is about 50,000 light-years across.

NGC 4302 is seen virtually edge on and has a very dense dust lane that completely hides the core. The bright part of the disk is nearly 100,000 light-years wide and 11,500 thick. If the outer halo is included its dimensions are 150,000 by 30,000 light-years. While it shows no sign of a central bulge the ratio of the outer halo is only 150:30 = ~5:1. The Flat Galaxy Catalog requires a ratio of 7:1 as seen on the Palomar plates. Apparently, they include this faint outer halo. If only the bright disk was used it would qualify. Except for the ends of the disk it mostly surprisingly red. This may be due to the dust rather than old stars though it does show areas of blue, especially at the southern end near a foreground star. The same paper cited in my NGC 5777 post shows a similar, very small plume in this galaxy. They obviously got the directions wrong in their image and don\'t show the entire galaxy. What they do show has stars and other features subtracted out making it impossible for me to determine where they are looking.

Both NGC galaxies were discovered by William Herschel on April 8, 1784. Both are in the second H400 program.

I get an odd illusion with this pair. I see NGC 4298 as a buzz saw and NGC 4302 has having had the buzz saw cut off its northern arm as it passed through the galaxy coming toward us and our galaxy. Pure pareidolia as I doubt these two are interacting in any way though they may in the future as their redshifts are similar.

The annotated image shows catalog names for objects with names that are not just its coordinates. Many come from the Virgo Cluster Catalog (VCC) most of which aren\'t members of the cluster. VPC is the Virgo Photometric Catalog and it too contains non-cluster galaxies.

As usual, I ran into a rather bright fuzzy blue galaxy not in NED. Seems there\'s at least one in most of my images. As usual, it is noted by a question mark.

The sky was far from transparent this night but otherwise didn\'t harm the image. Due to lack of transparency, its limiting magnitude is about 21 which is 1.5 below my norm under good skies. 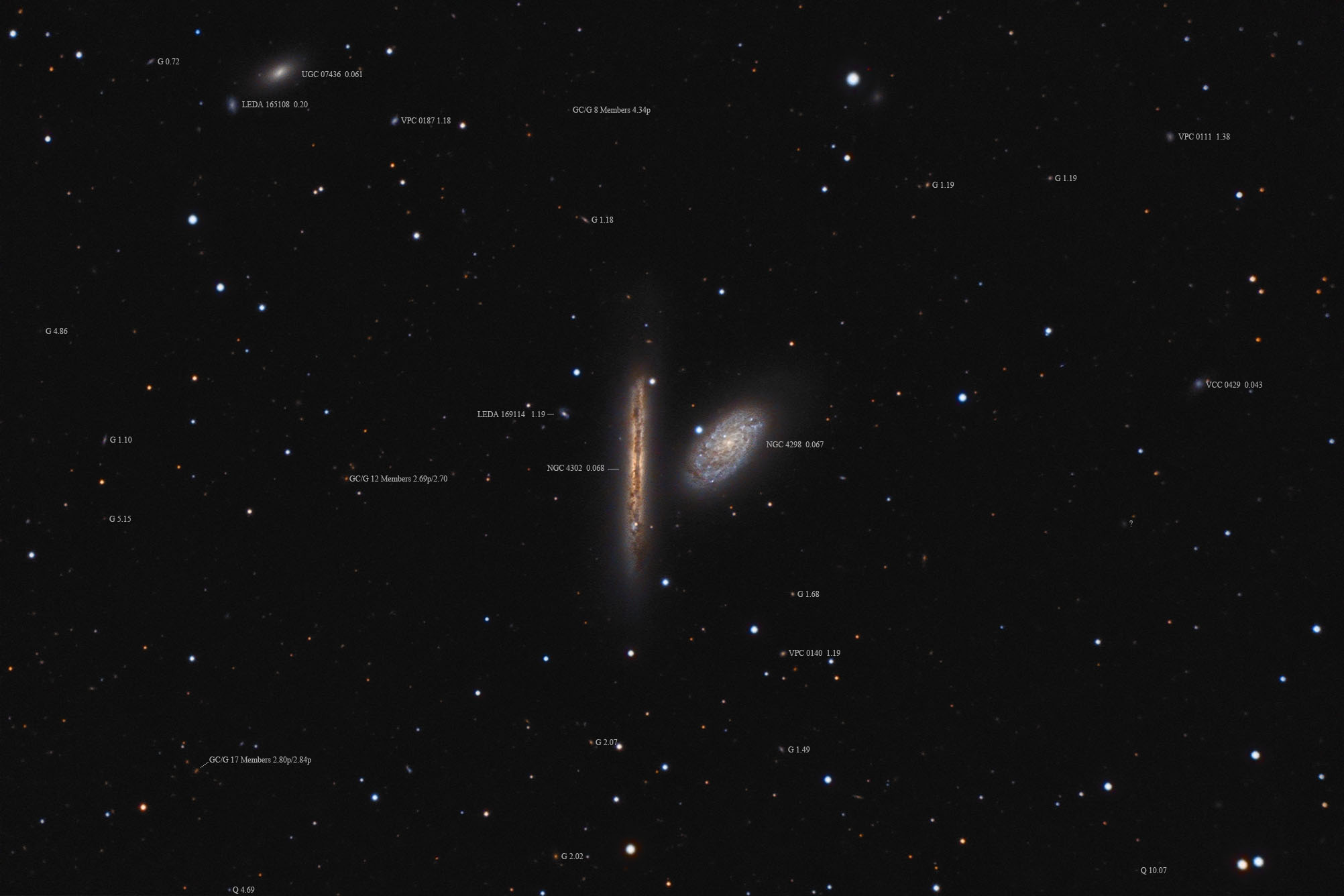 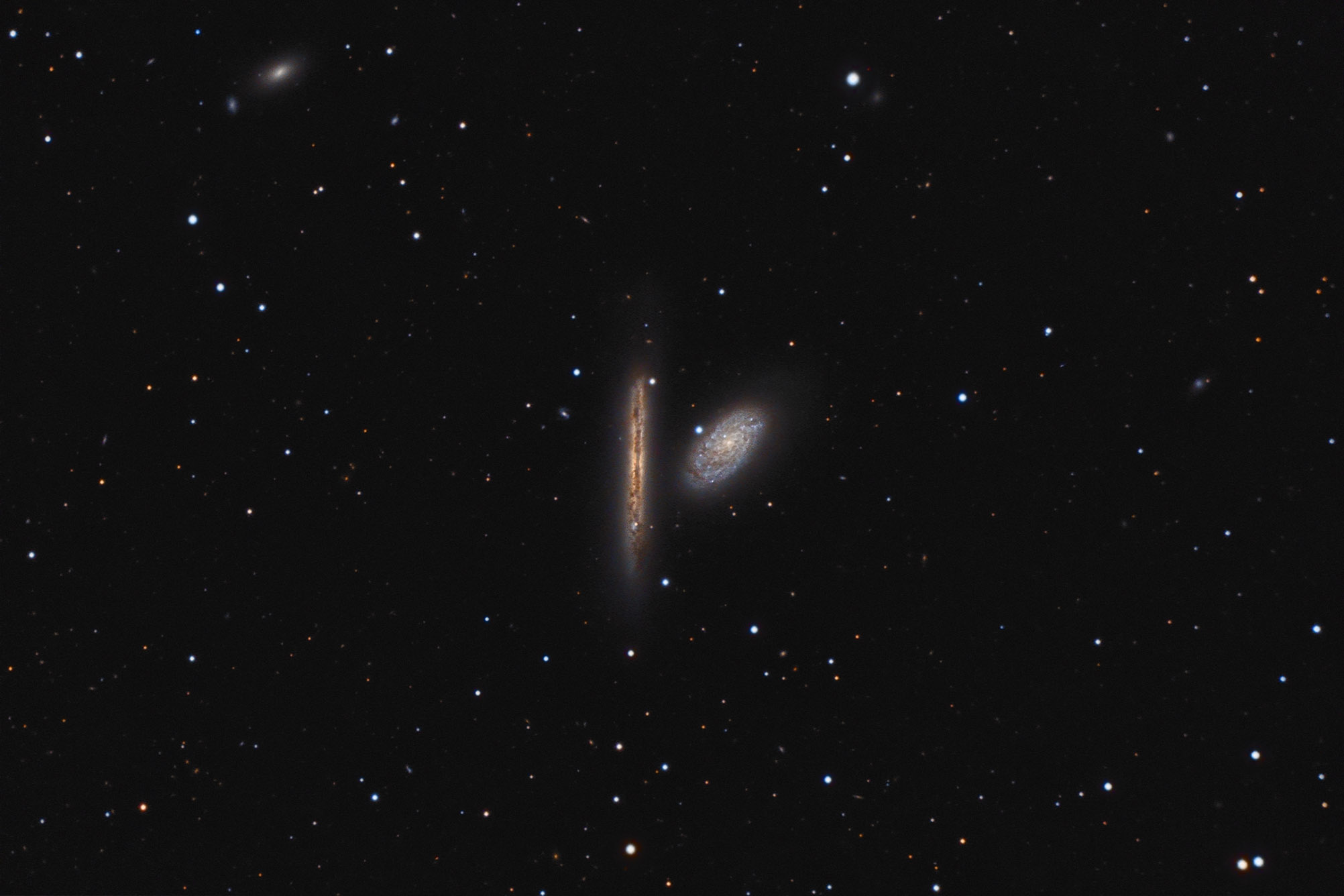 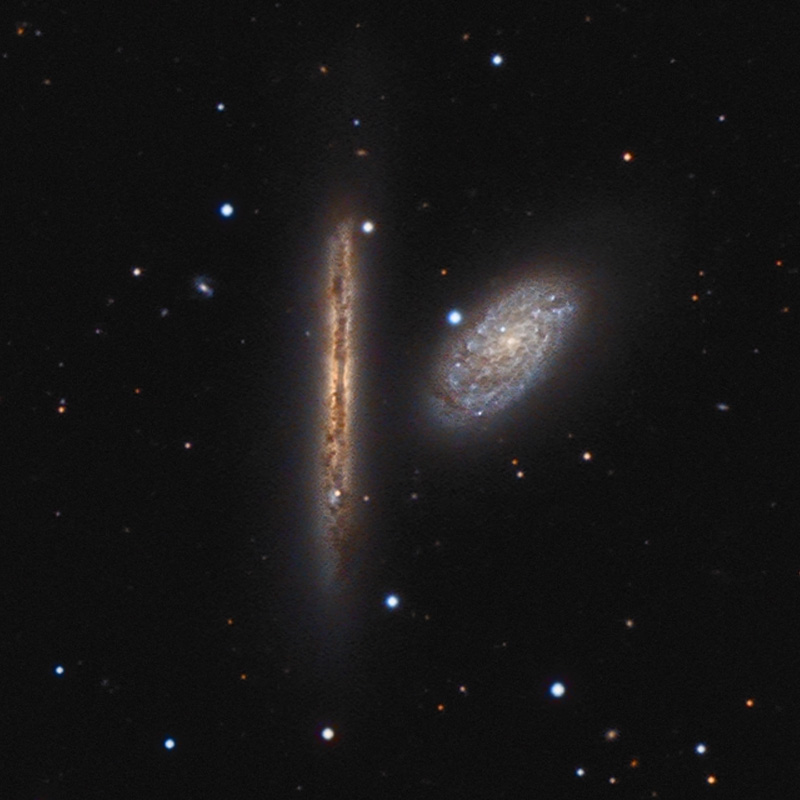