Both appear distorted by their interaction. NGC 4633 is classified at NED as SAB(s)dm: while Seligman says SBd?. The NGC Project leaves off the question mark. I classify it as \"A Mess\" though that isn\'t a valid classification. Still, it describes it better to my eye. Likely it was a much better organized barred spiral before it had a run-in with NGC 4634. Seen edge-on NGC 4634 seems to be a somewhat ordinary edge on galaxy within an oddly unsymmetric halo. In some ways, it resembles the Hamberger Galaxy, NGC 3628. Though its dust lane is also far from symmetric extending beyond the disk and into the halo to the northwest and breaking up and disappearing before reaching the southeast end of the inner galaxy. The HST image doesn\'t go deep enough to show much of the halo, unfortunately. Also, its color filters result in a somewhat false-color image missing the reddish hues that extend into the halo. Most halos are filled with new hot stars so tend to be blue but this one had a lot of cooler stars in it for some reason. Note I did push color on these two galaxies more than usual to bring out this oddity.

NED shows a 20.1 magnitude quasar seen through NEG 4634. I point to its location though it is lost in the glare of the galaxy in my image. I can\'t even find it in the HST image linked to above. There are three asteroid trails in the image. One ran right over the 20.2 magnitude galaxy, SDSS J124212.15+142124.3. NED has no distance data for it. Just east of NGC 4634 is a pair of galaxies that have the same redshift so may be interacting. The red one, PGC 042739 is shown at NED as being BCD?. BCD normally stands for Blue Compact Dwarf. But given its color and distance is neither blue nor a dwarf. At least they added a question mark. It may be it got this designation before redshift was measured. Still, it is obviously quite red compared to its blue companion which should have been quite evident since the mid 50\'s when the first POSS survey was done in blue and red light. If there\'s another meaning for BCD I have never heard of it. https://ned.ipac.caltech.edu/level5/Sept02/Palco_BCD/Agpaz3.html 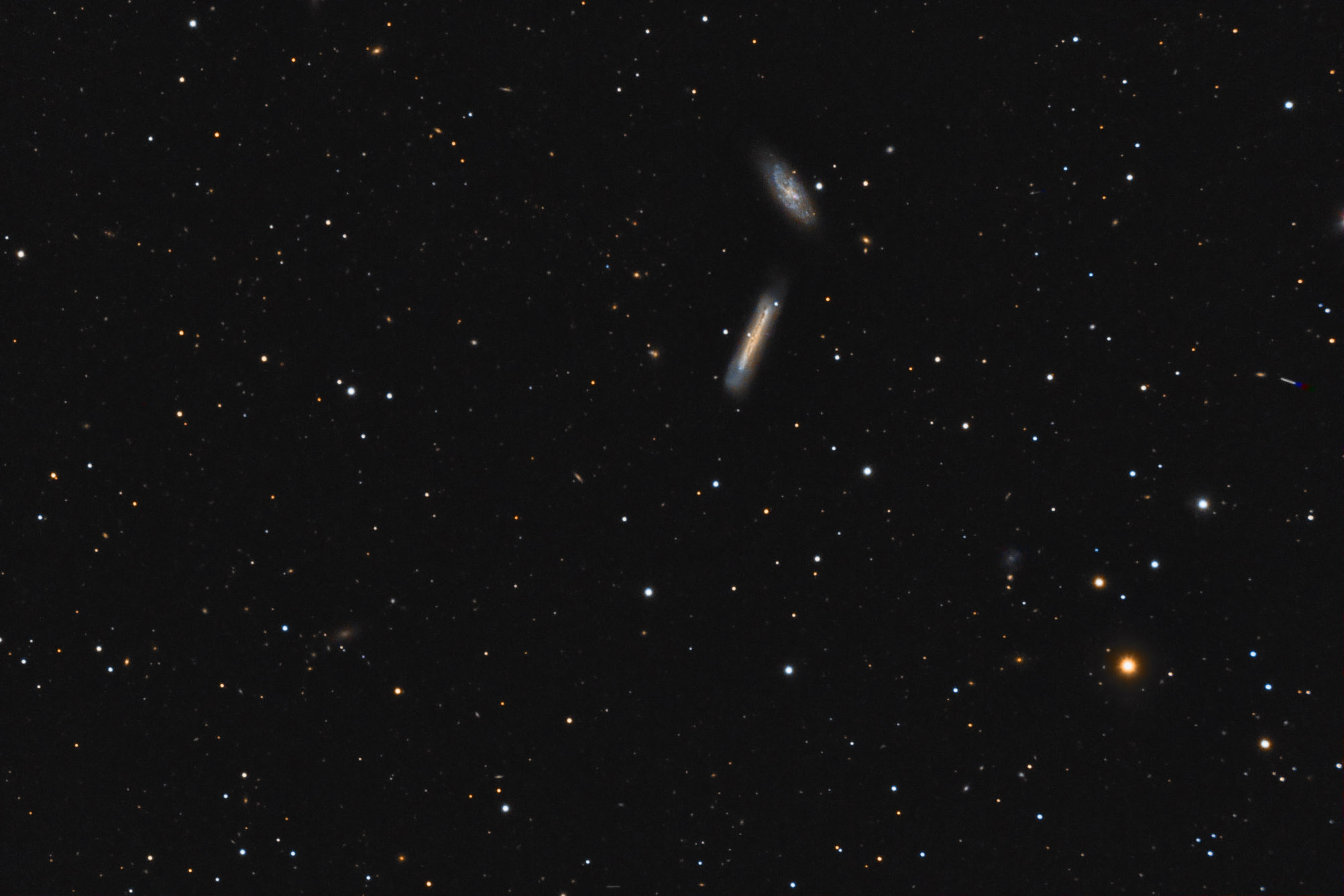 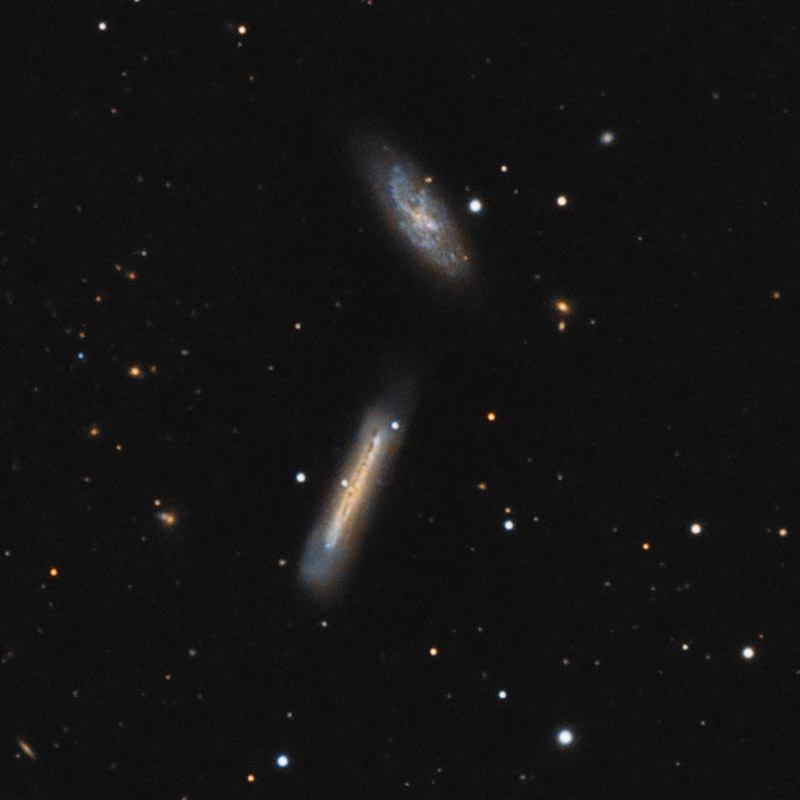 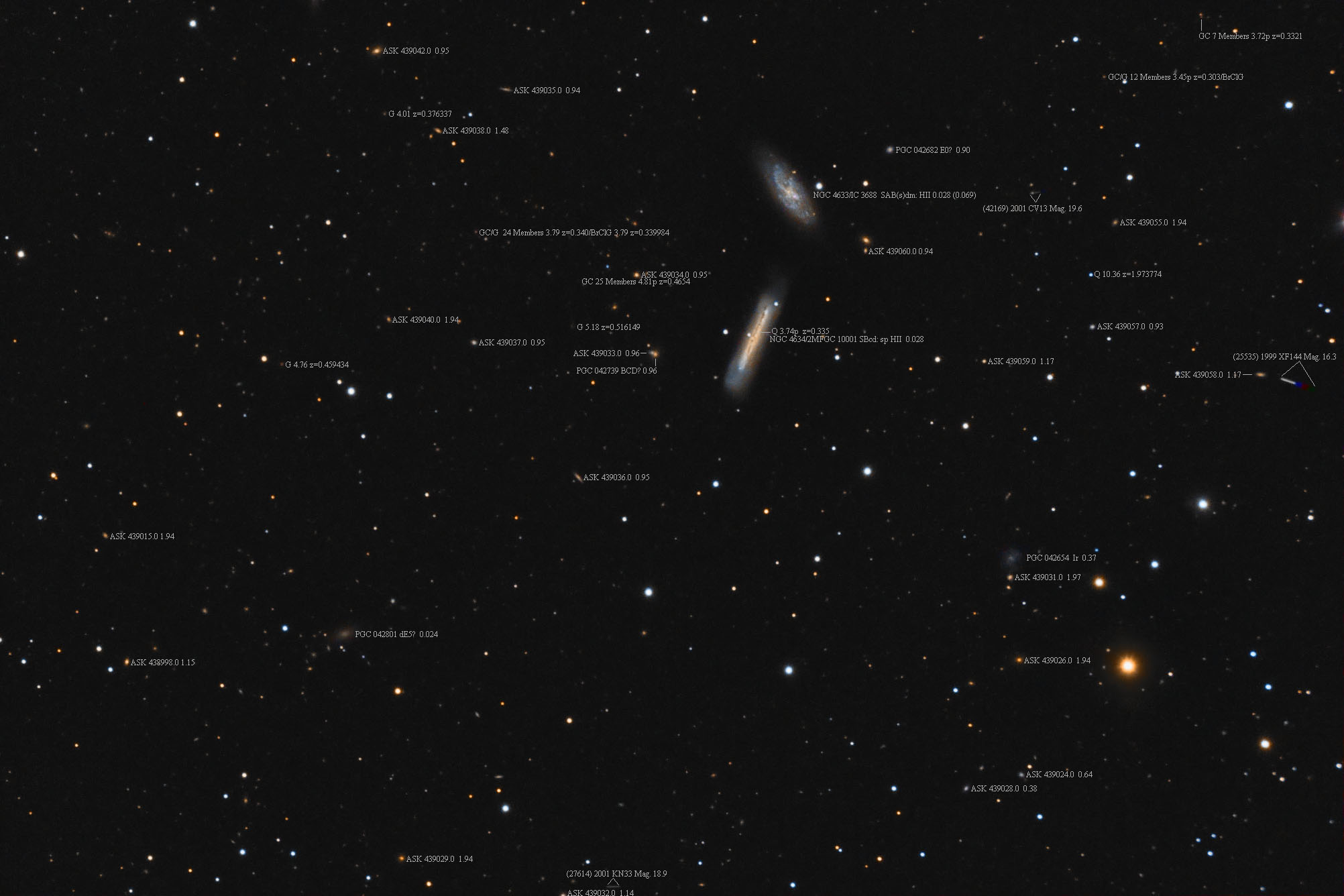