NGC 4643, located in central Virgo about 77 million light-years distant, is, at first glance in most images, a rather normal but featureless barred spiral as seen in the Sloan Survey image attached. Looks can be deceiving, however. When the image is really stretched beyond normal, even in my very short 40 minutes of exposure time it turns into a polar ring galaxy. Also, the disk has a nice ring with a diameter exactly that of the central bar. This ring gives it the \"r\" in its classification of SB(rs)0/a Linear. It is also responsible for it being classed both as S0 and Sa. Outside this ring is a nonconcentric arc. It is concentric for much of a bit over 180 degrees it covers but note it is much closer to the inner ring at the northwest end of the bar compared to the southeast end of the bar. But it is its polar ring that nearly all imagers of this one miss. It is at nearly right angles to the bar extending far to the Northeast and southwest of the faint outer envelope.

Assuming the 77 million light-year distance the central bar is 40,000 light-years long. The major axis of the disk as it is usually seen is 107,000 light-years across. Include the polar ring it is a whopping 228,000 light-years end to end. A very deep image of it taken with the Australian Schmidt camera shows the ring well. A negative view is at: http://203.15.109.22/images/deep_html/n4643_d.html . The link may be broken

The polar ring is likely due to some galaxy that merged with it leaving the polar ring as evidence of its destruction. This likely is also could be the cause of its LINER active core though new studies show white dwarfs can cause the LINER spectral effect.

You know the disk of the galaxy is thin and mostly dust free when a galaxy cluster at nearly 4 billion light-years shines right through the disk.

I\'m not at all confident of the colors of the fainter parts of the galaxy. Conditions like usual for this spring were poor. The fainter parts in the color frames were well into the noise. I seem to show the outer shell that\'s rarely imaged as slightly red, redder than the inner disk. This may be noise. I need more and longer color subs under better conditions to be sure of the color.

The temperature changed during this image so I had to use RegiStar to resize and align the image. It normally does a perfect job. This one however completely threw it for a loop. Some stars that were only a second or two out of alignment suddenly were 30 seconds out of alignment one way or another. Two close by could be moved in very different locations. This was the red data. All the other frames aligned perfectly but red seemed to align randomly. I rebooted the computer thinking something had messed it up. I tried ordering the frames differently and many other things but it was always the two red frames that were far out of alignment in a random way. Though both reds aligned with each other just fine. This meant I had to do a lot of work moving the stars into position. The vast majority aligned correctly but about 150 scattered sometimes up to 30 seconds of arc from where it should have been while nearby stars were perfect. One thing I didn\'t try was to reinstall the program. I may have a corrupt installation though when I tried other images all worked as it should. Many stars and galaxies are only sort of aligned. I\'ll try again if I ever get the program to read the red frames correctly.

The annotated image shows many background galaxies, quasars, quasar candidates (UvES) and one Narrow Line Emission Galaxy all with redshift data. The galaxy clusters all used only photographic redshift noted by a \"p\" by the distance, same with the UvES entries. 5 asteroids also snuck into the image. All rather faint. Their details are in the annotated image. Near NGC 4643 to the northeast is a pair of apparently interacting galaxies at 1.10 and 1.11 billion light-years. The northern one looks like a comet with a fat but short tail. The companion is a compact galaxy and shows no distortion. Could it have the mass needed to disrupt the less dense probable spiral into its comet-like appearance? I need a lot more resolution than my skies allow to get any hint of what\'s going on with these two. 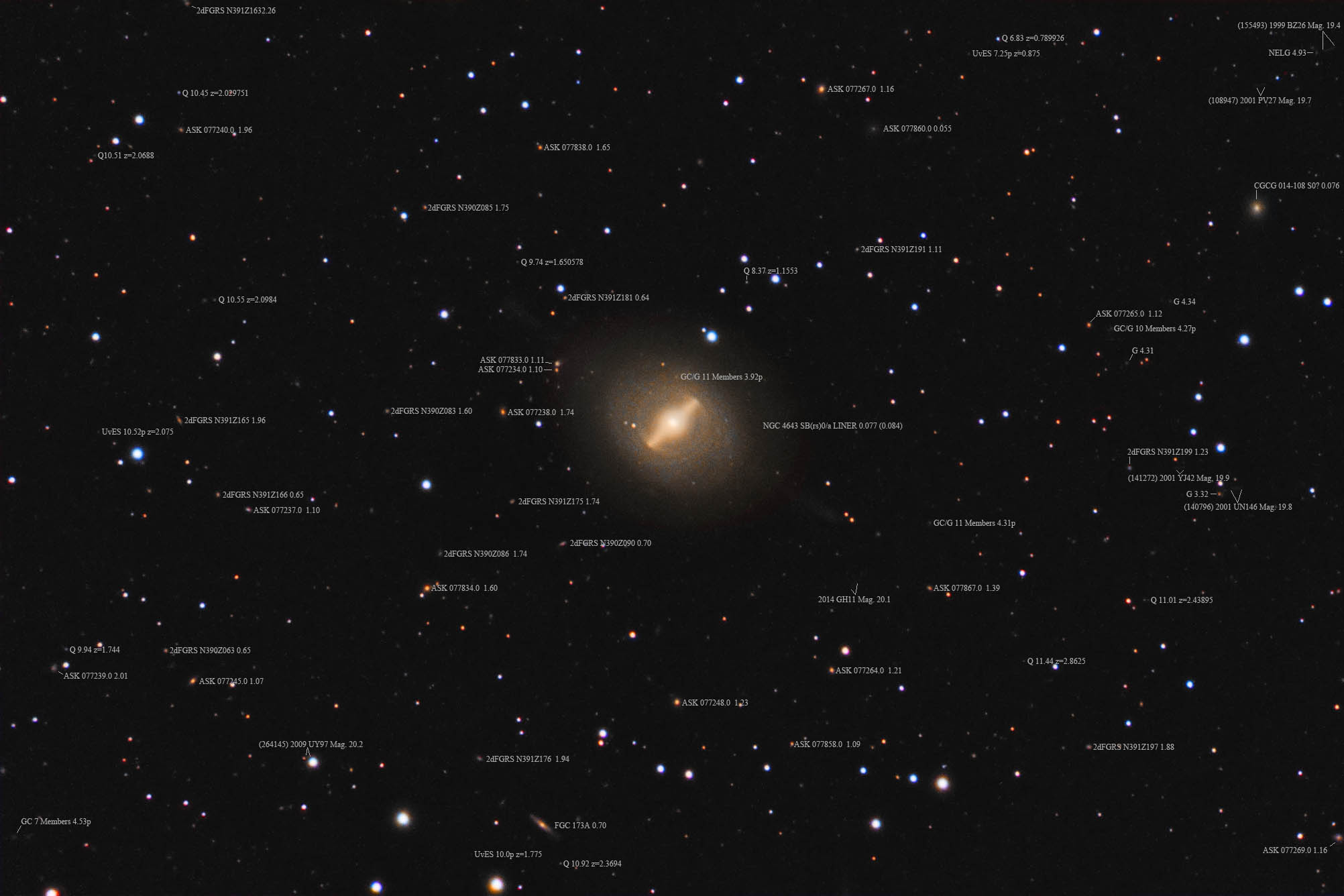 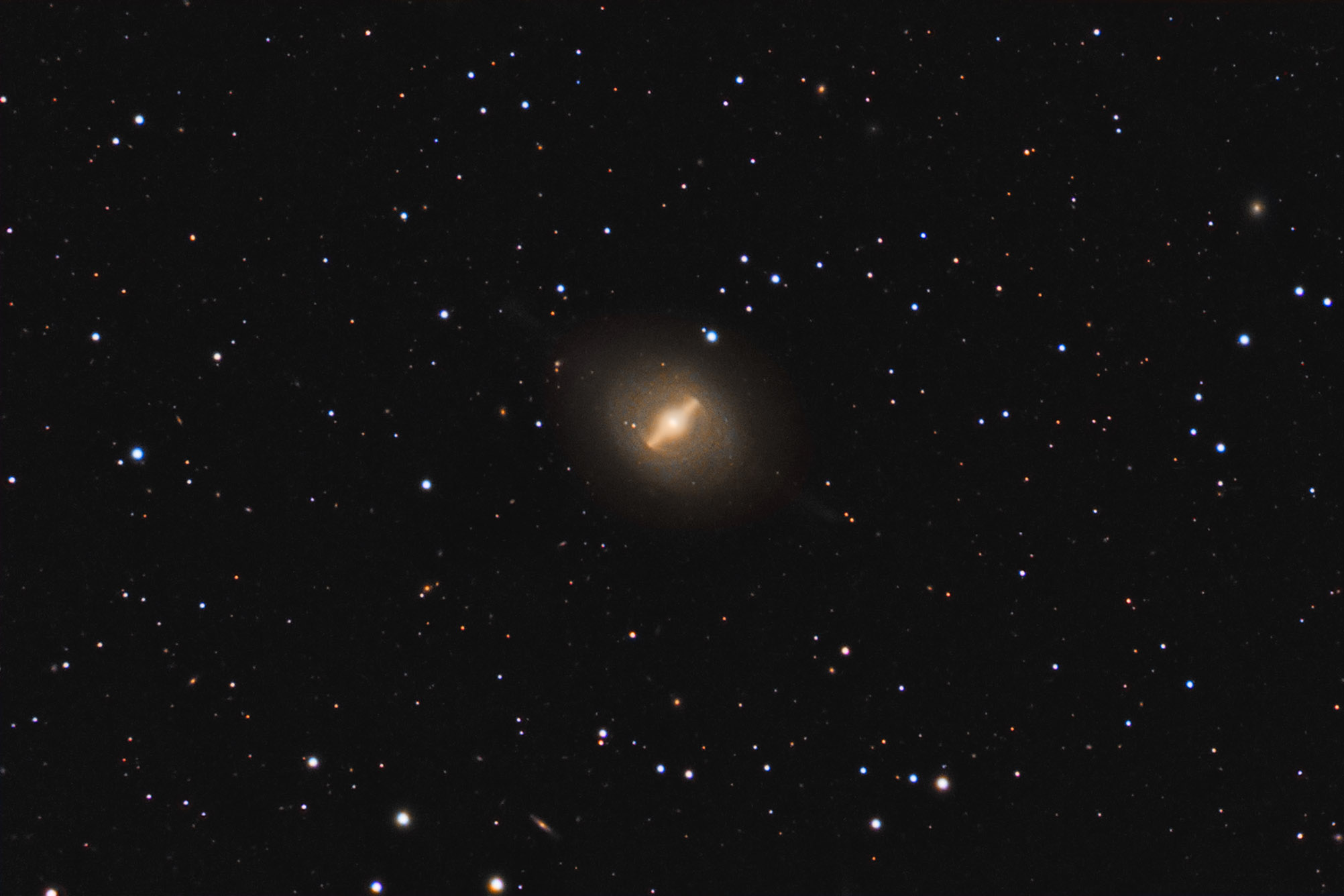 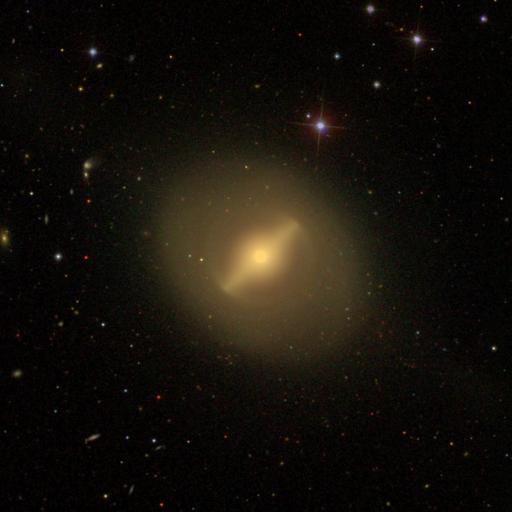