NGC 4725 is an often imaged galaxy in Coma Berenices. While red shift puts it at a distance of 69 million light-years most non-redshift estimates put it closer at say 41 to 43 million light-years. It is classified as SAB(r)ab pec Sy2 so has an active core and is classed as peculiar likely due to the large arm that wraps around it. It is a true one armed galaxy. How it got that way isn\'t known. The Seyfert 2 status would indicate a very active core with a feeding black hole. Could that be due to an interaction with another galaxy or one it ate? I found nothing on that, just a note that an arm like that can rotate either with the galaxy or against it. But since this is a true arm I assume it rotates with the galaxy though the note at APOD didn\'t say.

The galaxy was discovered by William Herschel, who else, on April 6 or 10, 1785. It is in the original Herschel 400 observing program. Two usually good sources, the NGC project and Seligman don\'t agree. Seligman has the earlier date.

My notes on NGC 4725 taken with my 10\" f/5 on April 23, 1985 under fair but humidity dimmed skies with moonlight bothering using 50x reads: \"Large, oval galaxy with a star-like nucleus. Two other very faint galaxies are in the same low power field.\"

One of the galaxies I mention must be NGC 4712 that was discovered by John Herschel on March 28, 1832. It is the other more normal looking spiral in the image. It isn\'t related to NGC 4725 as it lies some 200 million light-years away. It is classed as an Sbc? galaxy by Seligman and SA(s)bc HII by NED. Take your pick. The other I mentioned is likely NGC 4747 which is out of the frame to the northeast (upper left). It is also known as Arp 159. My entry for that shows all three galaxies so check it out if you haven\'t already.

An infrared shot taken by the Spitzer Space Telescope can be seen at:
http://antwrp.gsfc.nasa.gov/apod/ap050901.html
In false color, it shows the area of new star formation as red indicating this galaxy has a single arm though that is hard to see in light our eyes see. Though note the red in the Spitzer image agrees very closely to the blue regions in my image as the massive short-lived blue stars formed in this region of star birth have not yet lived out their short lives. So we see areas of new stars as blue while Spitzer sees them in infrared as red. Though Spitzer is looking at the dust and gas that these stars form out of while I\'m seeing the light of the stars that formed out of this dust and gas.

This image is was one of my very early images. I reprocessed it but it needs retaking more correctly. 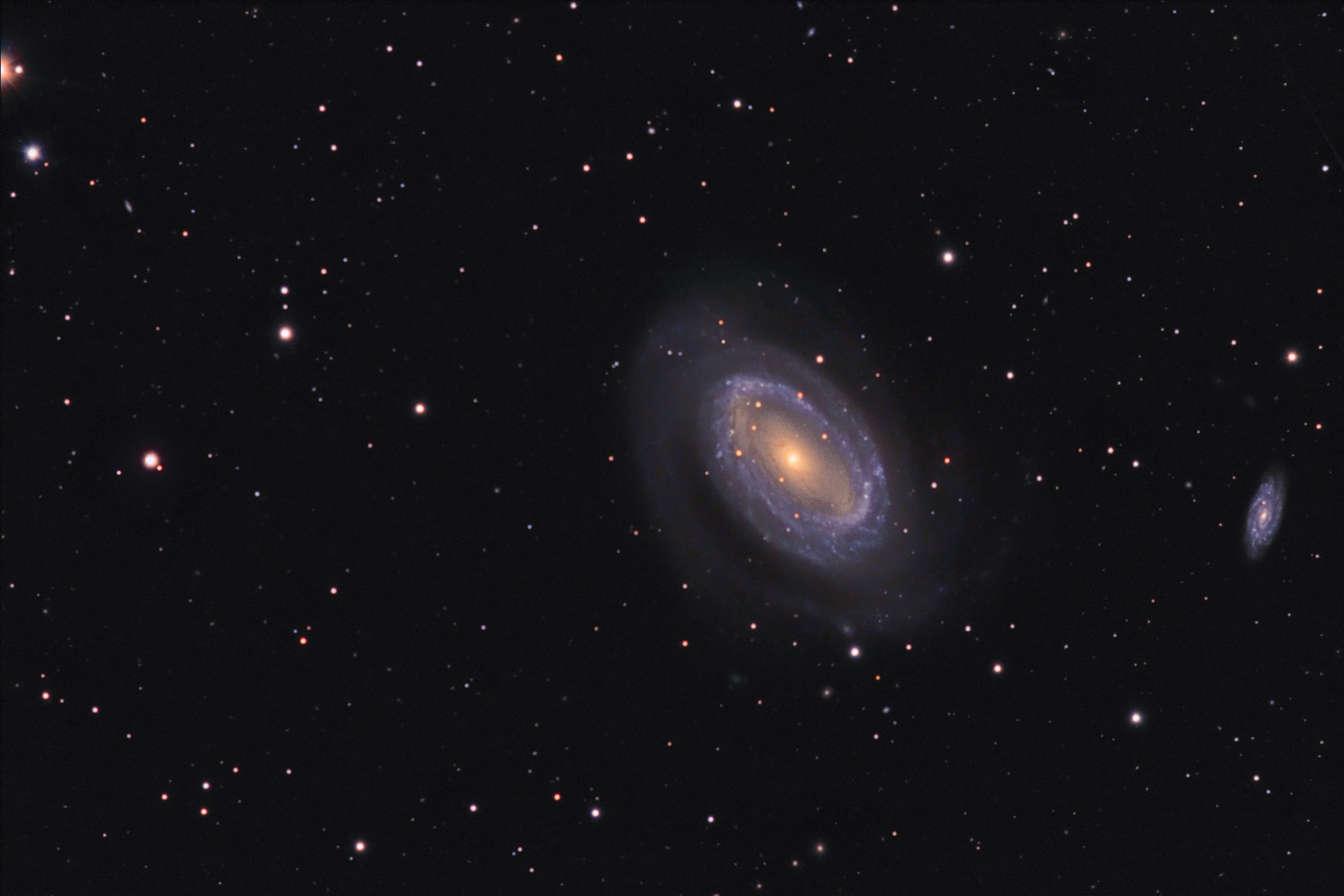