UGC 08091 is a dwarf irregular galaxy likely part of our local extended group of galaxies. Distance estimates ranged from 3 million to 7 million light-years with 3.65 million light-years being the median value of 15 estimates at NED. Redshift is worthless this close. It would indicate about 24 million light-years which is certainly not reasonable. The galaxy is full of star knots in what appears to be a random pattern. It is located in Virgo so is seen against the Virgo cluster of galaxies but isn\'t a member of that group, nor is the other major galaxy in the image NGC 4866. UGC 08091 has a very blue color indicating a lot of recent star formation as such stars live only a few million to tens of millions of years rather than the 10 billion years a star such as our sun would live.

NGC 4866 lies at a distance of about 100 to 110 million light-years by redshift though some other estimates place it closer at about 52 million light-years. If correct that would put it in the Virgo cluster but most of the measurements place it in the 80 to 95 million light-year range. The majority would argue that it lies beyond the Virgo cluster. It is a starburst galaxy that NED classes as SB(rs)bc with HII emission. That emission is confined to the core region where the starburst activity is going on but hidden from our view by the obscuring dust around the core. Otherwise, it appears a rather dead galaxy as the disk stars are mostly of a slightly cooler type than our sun making it appear star formation in the disk ceased millions or even billions of years ago.

NGC 4866 was discovered by William Herschel on January 14, 1787. It is in the original Herschel 400 observing program. My entry from April 23, 1985 with my Cave 10\" f/5 at 50 power due to poor transparency from ground fog reads: \"Edge on galaxy with two bright objects near the center. One may be a star but seeing has deteriorated too much to tell for sure.\" Apparently, I was seeing the blue star and core of the galaxy though the star doesn\'t appear \"near\" the center and the core is in the exact center. Maybe my brain was as foggy as the skies that night.

As with many images, this spring weather did a number on this one. I had to throw out 3 of 7 luminance frames 3 of 5 red and green frames and 2 of 4 blue frames due to clouds killing the data beyond usefulness. I\'m surprised I got as much as I did.

As usual, I happened across a couple galaxies not in NED. The faint fuzzy to the southwest of NGC 4866 was one I hoped to find something on. Is it a close dwarf of very low surface brightness or just what is it. I know it isn\'t a reflection as it shows in the Sloan Survey image but isn\'t in NED\'s database of Sloan data. Another galaxy to the far east was missing too when I looked it up. Usually, it is the faint blue fuzzy that gets missed as with the first one mentioned but this second one doesn\'t fit that description. An HST image of it can be seen at: http://cseligman.com/text/atlas/ngc4866hst.jpg

One distant fuzzy is listed in NED\'s Sloan data as both a galaxy and a quasar. Since they preferred the quasar label I listed it that way first on the annotated image. At only 3.62 billion light-years it is rather dim for a quasar. It\'s in the lower right corner. Near the upper right corner is a small galaxy cluster. The position is about 1 second of arc different from the big cluster galaxy that anchors the group. I put the label on the big cluster galaxy as it overlapped the position of the cluster. Both have a photographically determined redshift which don\'t agree. I have no idea which is the one most likely to be closest to the correct distance. They only vary by 150 million light-years so this isn\'t a major issue. 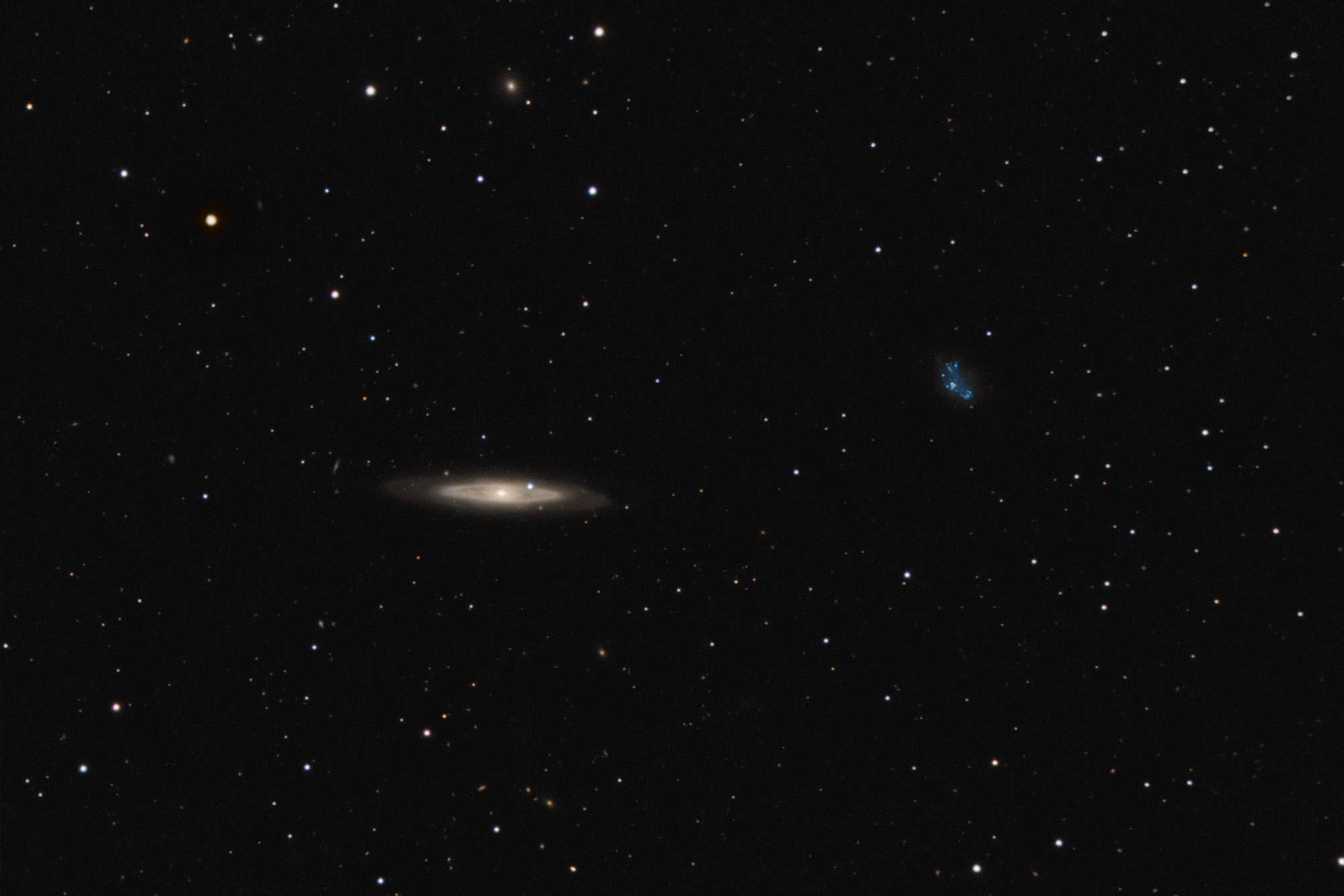 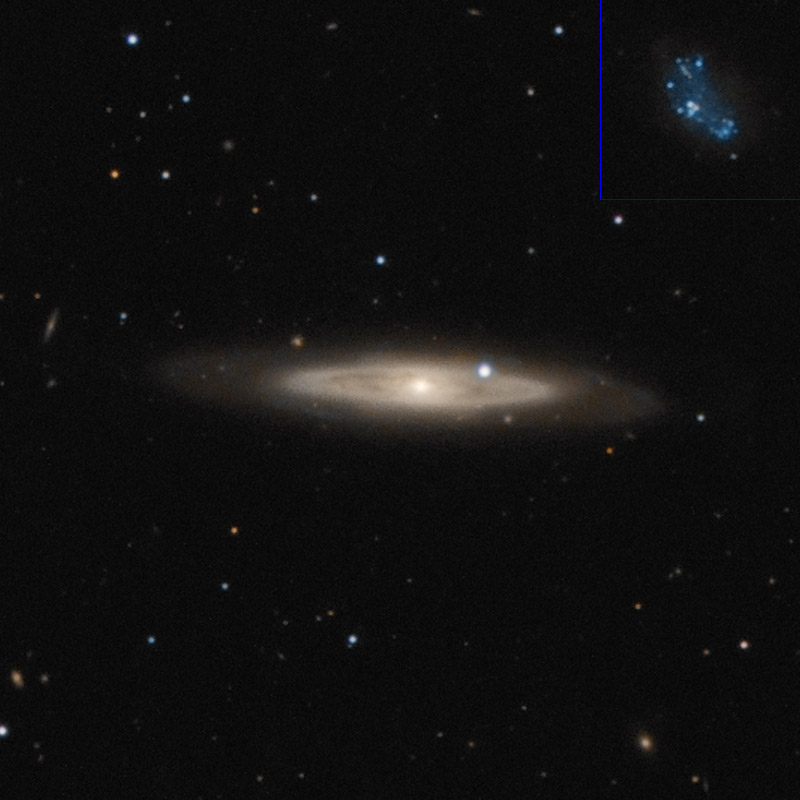 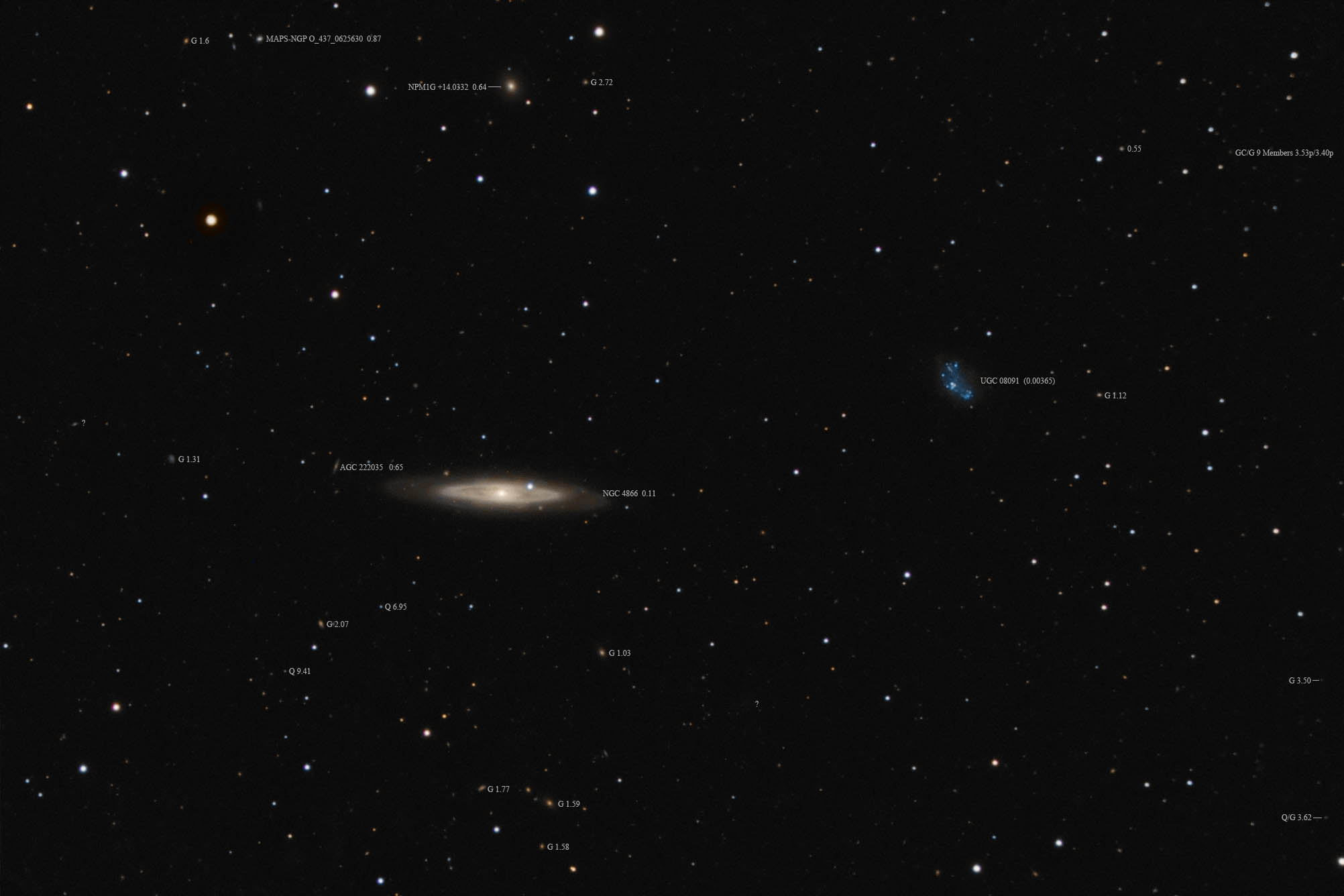